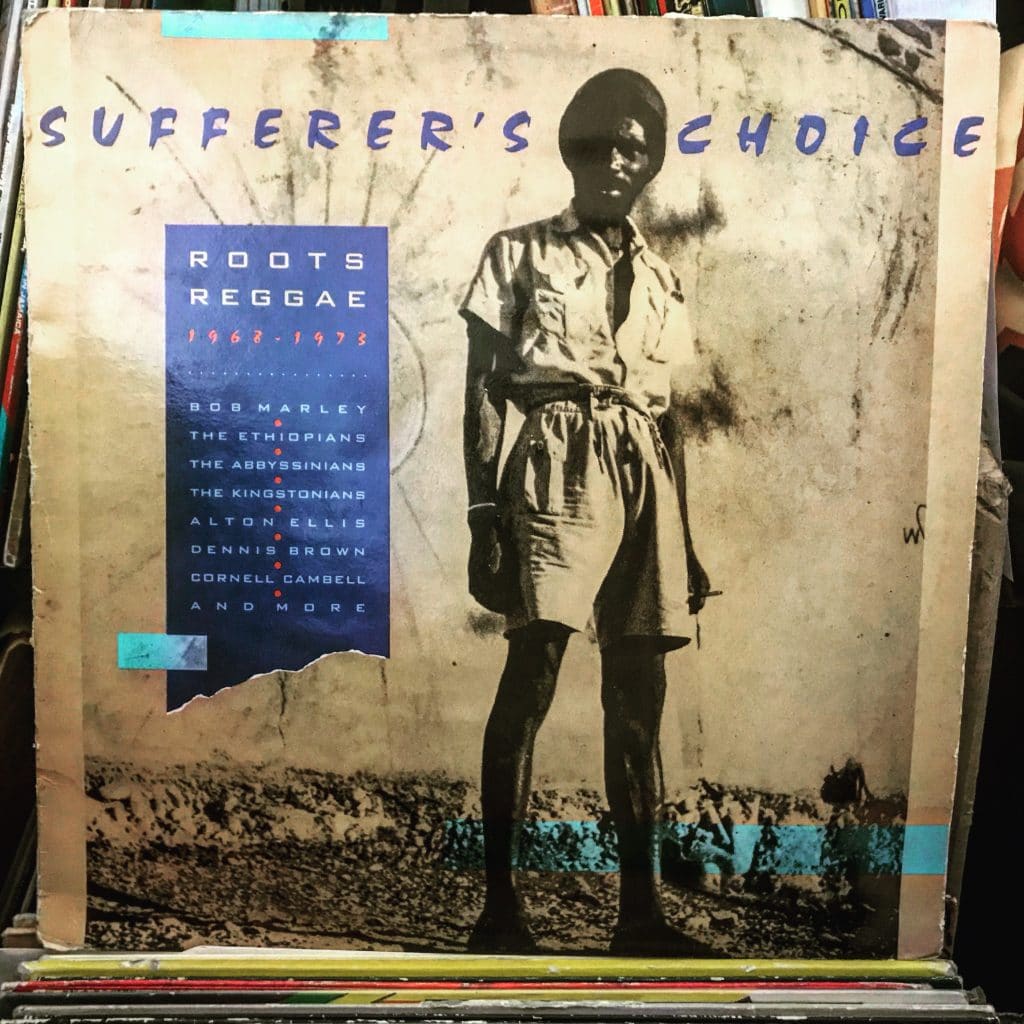 “The music herein represents some of the most heartfelt ever committed to wax in the history of Jamaican music; it is not a joke thing, nor is it a rebel pose. Its truth and honesty has endured for nearly two decades, proving, if proof be needed, that real soul is timeless.” – Steve Barrow 1988. From the sleeve notes.

This compilation of early Roots Reggae is a special one to me. I was still in high school when I found the CD edition at the now-long-gone, hole-in-the-wall reggae record store “Scooters” in Hermosa Beach, CA. It introduced me to songs that today, over 20 years later, I can’t imagine ever having lived without. Tunes like “Sufferer” by The Kingstonians, “Jah Jah Me No Born Yah” by Cornell Campbell, “Deliver Us To Africa” by Alton Ellis, “The Song My Mother Used To Sing” by Dennis Brown, “Warricka Hill” by The Versatiles, “Know Far I” by Bongo Herman, “Yim Mas Gan” by The Abyssinians, and “Jordan River” by Max Romeo; to me, these are all indispensable classics that I heard for the first time on this compilation.

One song in particular, “Condition Bad A Yard” by The Ethiopians, had what can honestly be described as a life-changing influence on me. It was my first introduction to the music of The Ethiopians and their lead singer/song writer Leonard Dillon, who would soon become the main inspiration for myself and my best-friend John Butcher to start our own Roots Reggae band. “Condition Bad A Yard” was one of the tunes we used as a guide to harmony singing, and we covered the tune at shows or sang it as a warmup backstage for years.

The songs on “Sufferer’s Choice” were compiled by Reggae historian and archivist Steve Barrow, head of the superb and now-sadly-defunct reissue label Blood & Fire. Mr. Barrow also wrote the liner notes that appear on the back of the LP sleeve. They offer insight into why these specific tunes were chosen for a compilation of “Sufferer’s Music,” as Roots Reggae is sometimes referred to, as well as providing some back story on the songs themselves. I have included them in full below: 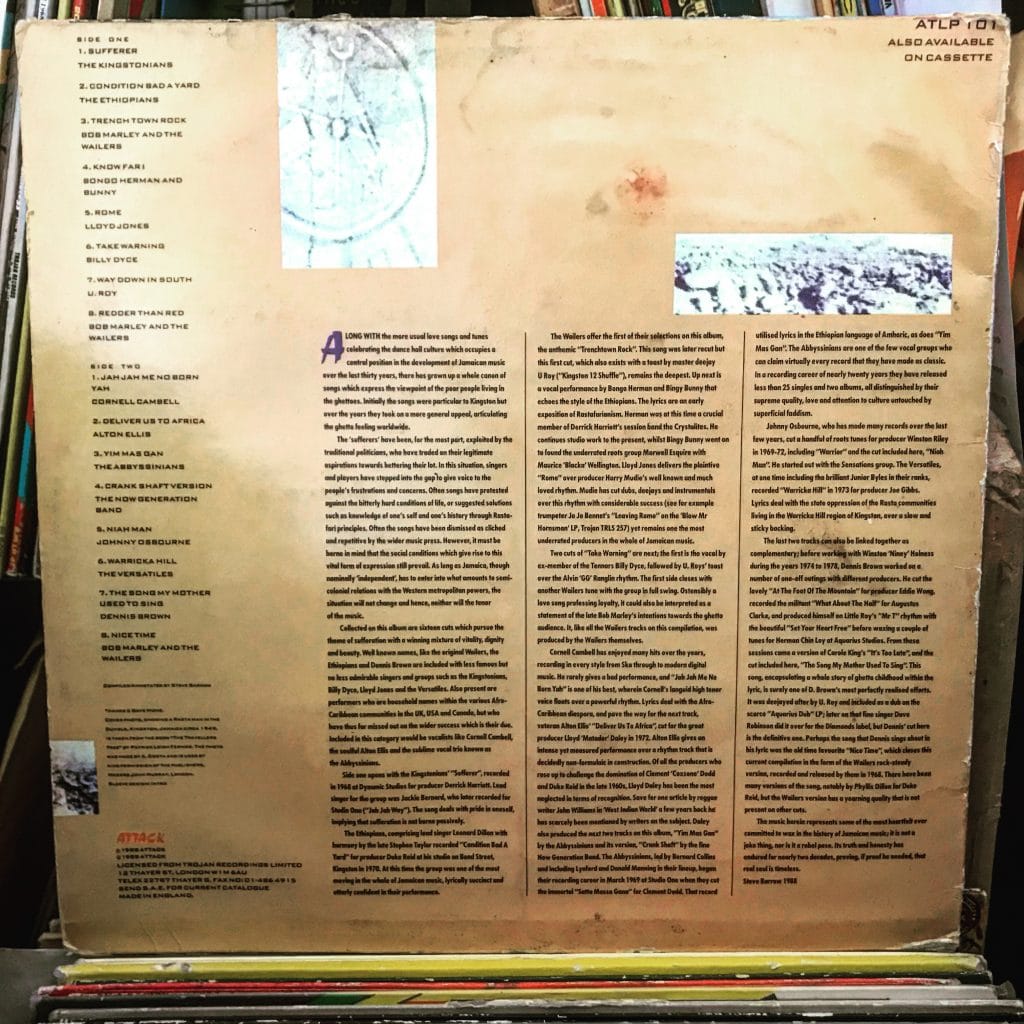 The following text is the complete rear-sleeve notes pictured above, written by Steve Barrow in 1988:

“Along with the more usual love songs and tunes celebrating the dance hall culture which occupies a central position in the development of Jamaican music over the last thirty years, there has grown up a whole canon of songs which express the viewpoint of the poor people living in the ghettoes. Initially the songs were particular to Kingston but over the years they took on a more general appeal, articulating the ghetto feeling worldwide.

The “sufferers” have been, for the most part, exploited by the traditional politicians, who have traded on their legitimate aspirations towards bettering their lot. In this situation, singers and players have stepped into the gap to give voice to the people’s frustrations and concerns. Often songs have protested against the bitterly hard conditions of life, or suggested solutions such as knowledge of one’s self and one’s history through Rastafari principles. Often the songs have been dismissed as cliched and repetitive by the wider music press. However, it must be borne in mind that the social conditions which give rise to this vital form of expression still prevail. As long as Jamaica, though nominally “independent,” has to enter into what amounts to semi-colonial relations with the Western metropolitan powers, the situation will not change and hence, neither will the tenor of the music.

Collected on this album are sixteen cuts which pursue the theme of sufferation with a winning mixture of vitality, dignity and beauty. Well known names, like the original Wailers, the Ethiopians and Dennis Brown are included with less famous but no less admirable singers and groups such as the Kingstonians, Billy Dyce, Lloyd Jones*** and the Versatiles. Also present are performers who are household names within the various Afro-Caribbean communities in the UK, USA and Canada, but who thus far missed out on the wider success which is their due. Included in this category would be vocalists like Cornell Campbell, the soulful Alton Ellis and the sublime vocal trio known as the Abyssinians.

Side one opens with the Kingstonians “Sufferer,” recorded in 1968 at Dynamic Studios for producer Derrick Harriott. Lead singer for the group was Jackie Bernard, who later recorded for Studio One (“Jah Jah Way”). The song deals with pride in oneself, implying that sufferation is not borne passively.

The Ethiopians, comprised of lead singer Leonard Dillon and harmony by the late Stephen Taylor recorded “Condition Bad A Yard” for producer Duke Reid at his studio on Bond Street, Kingston in 1970. At this time the group was one of the most moving in the whole of Jamaican music, lyrically succinct and utterly confident in their performance.

The Wailers offer the first of their selections on this album, the anthemic “Trenchtown Rock.” This song was later recut but this first cut, which also exists with a toast by master deejay U Roy (“Kingston 12 Shuffle”), remains the deepest.

Up next is a vocal performance by Bongo Herman and Bingy Bunny (“Know Far I”) that echoes the style of the Ethiopians. The lyrics are an early exposition of Rastafarianism. Herman was at this time a crucial member of Derrick Harriot’s session band the Crystalites. He continues studio work to the present, whilst Bingy Bunny went on to found the underrated roots group Morwell Esquire with Maurice “Blacka” Wellington.

Two cuts of “Take Warning” are next; the first is the vocal cut by ex-member of the Tennors Billy Dyce, followed by U Roy’s toast over the Alvin ‘GG’ Ranglin rhythm. The first side closes with another Wailers tune with the group in full swing. Ostensibly a love song professing loyalty, it could also be interpreted as a statement of the late Bob Marley’s intentions towards the ghetto audience. It, like all the Wailers tracks on this compilation, was produced by the Wailers themselves.

Cornell Campbell has enjoyed many hits over the years, recording in every style from Ska through to modern digital music. He rarely gives a bad performance, and “Jah Jah Me No Born Yah” is one of his best, wherein Cornell’s languid high tenor voice floats over a powerful rhythm. Lyrics deal with the Afro-Caribbean diaspora, and pave the way for the next track, veteran Alton Ellis’ “Deliver Us To Africa,” cut for the great producer Lloyd ‘Matador’ Daley in 1972. Alton Ellis gives an intense yet measured performance over a rhythm track that is decidedly non-formulaic in construction. Of all the producers who rose up to challenge the domination of Clement ‘Coxsone’ Dodd and Duke Reid in the late 1960s, Lloyd Daley has been the most neglected in terms of recognition. Save for one article by reggae writer John Williams in ‘West Indian World’ a few years back he has scarcely been mentioned by writers on the subject. Daley also produced the next two tracks on this album, “Yim Mas Gan” by the Abyssinians and its version, “Crank Shaft” by the fine Now Generation Band. The Abyssinians, led by Bernard Collins and including Lynford and Donald Manning in their lineup, began their recording career in March 1969 at Studio One when they cut the immortal “Satta Massa Gana” for Clement Dodd. That record utilised lyrics in the Ethiopian language Amharic, as does “Yim Mas Gan.” The Abyssinians are one of the few vocal groups who can claim virtually every record that they have made as classic. In a recording career of nearly twenty years they have released less than 25 singles and two albums, all distinguished by their supreme quality, love and attention to culture untouched by superficial faddism.

Johnny Osborne, who has made many records over the last few years, cut a handful of roots tunes for producer Winston Riley in 1969-72, including “Warrior” and the cut included here, “Niah Man.” He started out with the Sensations group.

The Versatiles, at one time including the brilliant Junior Byles in their ranks, recorded “Warricka Hill” in 1973 for producer Joe Gibbs. Lyrics deal with the state oppression of the Rasta communities living in the Warricka Hill region of Kingston, over a slow and sticky backing.

The last two tracks can also be linked together as complimentary; before working with Winston ‘Niney’ Holness during the years 1974 to 1978, Dennis Brown worked on a number of one-off outings with different producers. He cut the lovely “At The Foot Of The Mountain” for producer Eddie Wong, recorded the militant “What About The Half” for Augustus Clarke, and produced himself on Little Roy’s “Mr T” rhythm with the beautiful “Set Your Heart Free” before waxing a couple of tunes for Herman Chin Loy at Aquarius Studios. From these sessions came a version of Carole King’s “It’s Too Late,” and the cut included here, “The Song My Mother Used To Sing.” This song, encapsulating a whole story of ghetto childhood within the lyric, is surely one of D. Brown’s most perfectly realized efforts. It was deejayed after by U Roy and included as a dub on the scarce “Aquarius Dub” LP; later on that fine singer Dave Robinson did it over for the Diamonds label, but Dennis’ cut here is the definitive one. Perhaps that song that Dennis sings about in his lyric was the old time favorite “Nice Time,” which closes this current compilation in the form of the Wailers rock-steady version, recorded and released by them in 1968. There have been many versions of the song, notably by Phyllis Dillon for Duke Reid, but the Wailers version has a yearning quality that is not present on other cuts.

The music herein represents some of the most heartfelt ever committed to wax in the history of Jamaican music; it is not a joke thing, nor is it a rebel pose. Its truth and honesty has endured for nearly two decades, proving, if proof be needed, that real soul is timeless.”

***The Lloyd Jones track “Rome” which is referred to here was included on the LP release but subsequently left off of the 1993 CD release, and replaced by “Jordan River”, a beautiful harmony duet sung by Max Romeo and Glen Adams over a syncopated early-roots rhythm. As the CD release was my introduction to the “Sufferer’s Choice” compilation, and because I feel that “Jordan River” is the stronger song, the Youtube playlist created to accompany this article emulates the CD release by omitting “Rome” in favor of “Jordan River.” 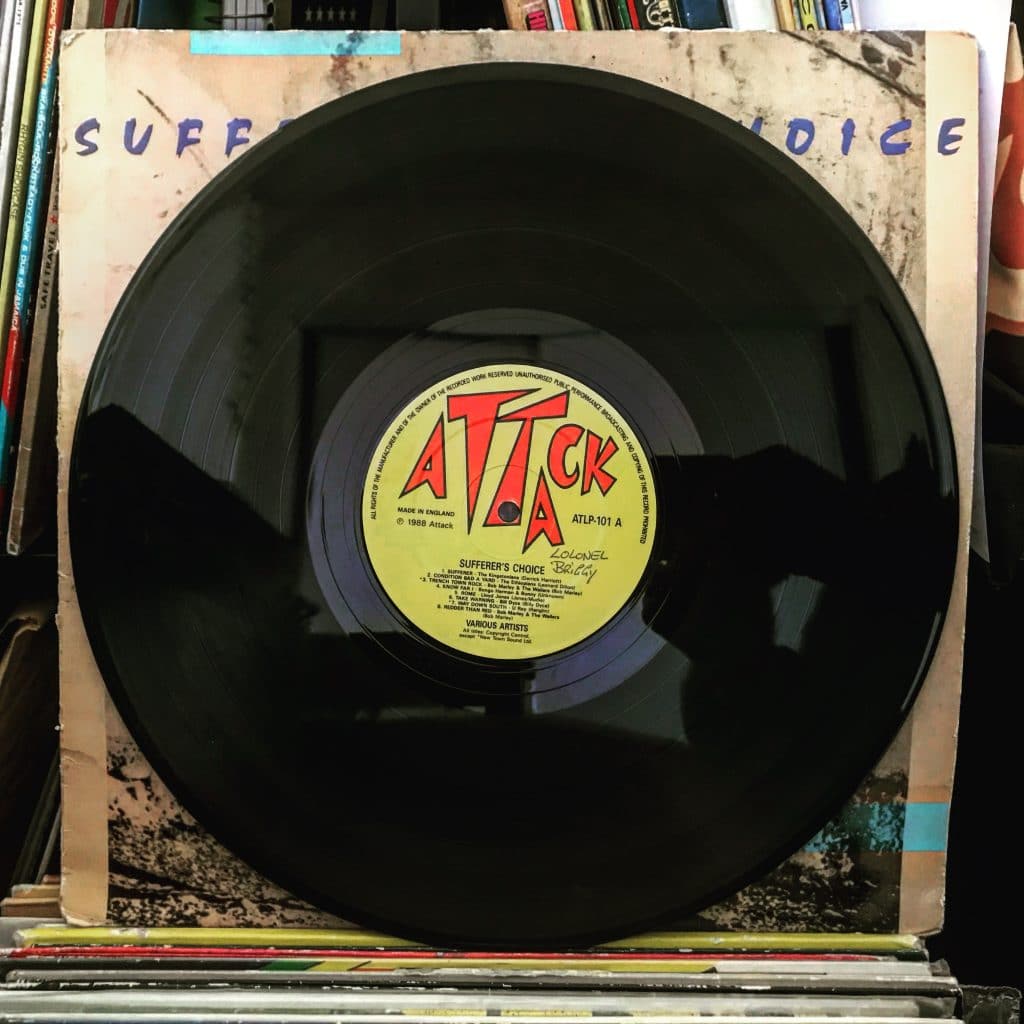