Michael Franti is not on tour; he’s on a mission. A revival to spread peace, love, healing, acceptance, inclusion, tolerance and hope.

I often refer to my regular attendance at concerts as “church” because of the upliftment these experiences provide. While this may illicit scoffs from more casual listeners, people who largely ignore music, and/or the deeply devout who attend actual religious services, committed music fans will concur that these events can provide real, meaningful spiritual fulfillment. Should any of the skeptics to whom I refer have the opportunity to attend a Michael Franti show like I did recently at the Wellmont Theater in Montclair, NJ, they would no doubt gain a greater appreciation and tolerance for my church metaphor.

As showtime approached, the festive vibes were already in full effect as fans danced to the sounds of Bruno Mars and other upbeat pop music on the house sound system. Signs reading “Power to the Peaceful” and “Make Earth Cooler” festooned the stage, while behind it a monstrous video screen displayed multiple-choice trivia questions about Franti, such as “What year did Michael stop wearing shoes?” (2000.)

During the final few minutes leading up to Franti’s appearance, a clock counting down the time replaced the trivia questions, and as fans excitedly bopped and sang along to Earth, Wind & Fire’s “September,” the video screen further incited the crowd with comments like “Make some more noise!” and “Are you ready?”

When the countdown reached zero, the video screen showed a film as Franti read, via voice-over, a letter that he had penned to his infant son, Taj. First displaying photos of the faces of people from all walks of life, the video then segued to a montage of images of conflict and destruction interspersed with wondrous shots of nature, people showing affection and footage of Franti, his wife and Taj.

“Thank you for letting me be your father. You have already changed me more than you will ever know,” Franti began. “There are some things I want to share with you about the world. It’s a really great place but not great all the time. People don’t always get along. Some people go to bed hungry. People destroy nature. Some people think you shouldn’t be allowed to choose who you want to love. These days we connect with each other more electronically than we do face to face.  And less than a year ago, you were born into this beautiful, imperfect and crazy world. Your mother and I already love you so much, but not everyone here on earth is nice to each other all the time. Despite it all, earth is still an incredible place…”

He continued, “My hope is that you will always feel free to be who you are and someday you will stand on your own two feet, and fall in love like your mother and I did, and grow wings to fly wherever you choose to go. I want to prepare you, protect you, and be present for you. Some days I feel like I got this parenting thing down. And other days, I’m scared. I’m worried. You see, there is a great battle taking place in the world today, a battle between cynicism and optimism. And I know it because I feel it inside myself. You know, Taj, some days I find it hard to just wake up and see what is happening in the world. I’m trying, just like billions of people in millions of corners of this earth, to not let the world get me down, to hold on to my beliefs and dreams and for you, and for this planet, and to just stay human.”

As the film concluded to rabid applause and a few emotional tears, Franti took the stage and immediately launched into his life-affirming track, “I’m Alive.” Massive energy emanated from the band and crowd, a rapturous intensity that would never relent throughout the entire night.

While Franti would invigorate the crowd with nineteen electrifying songs over the next two hours, the music was only one part of what made this performance special. So many extraordinary things happened; I almost don’t even know where to begin.

Franti has been known to allow fans to join him on stage and this night was no exception. He even generously shared the mic with a few (one of whom who had traveled several hours from Long Island after attending the previous evening’s show), who capably took over vocals for the hit song, “The Sound of Sunshine.”

Of the many heartwarming moments of the evening, one of the most poignant was when a family consisting of a woman, her mother and her son made their way to the stage. The young boy, who donned a flat brim cap with the name of the tour, “Stay Human,” emblazoned upon it, held a hand-made poster-board sign that read “Three generations of Soul Rockers…9 years old to 80 years young.” 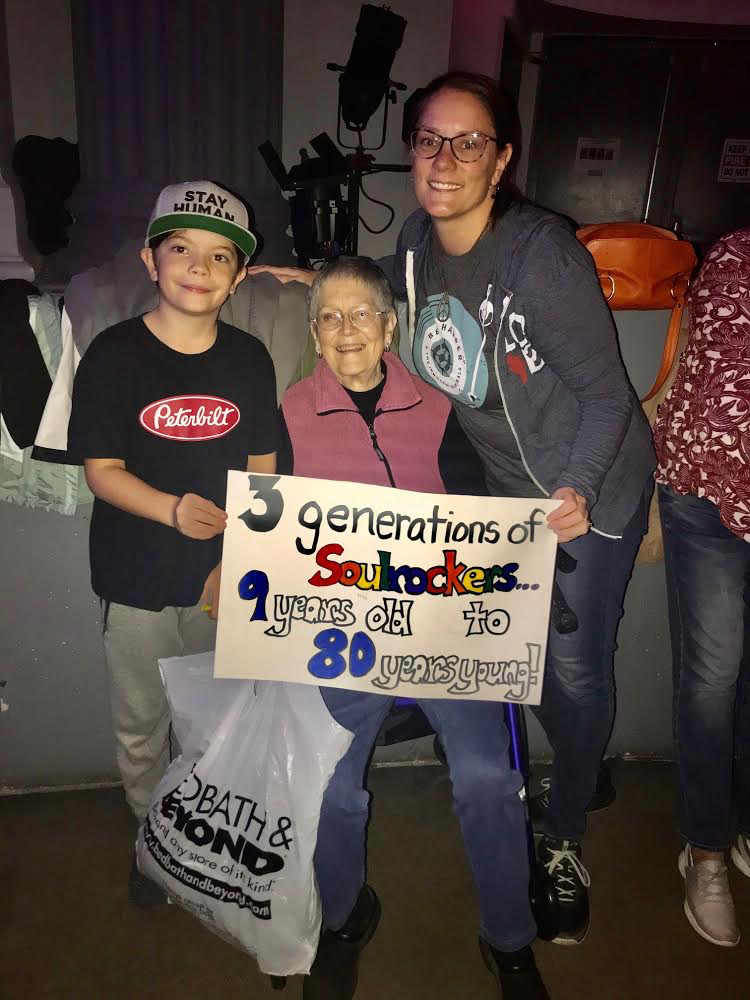 In addition to inviting fans up on stage, Franti has a penchant for bringing his music to the people, physically. Thanks to his wireless setup, he spends a notable amount of time each show embedding himself in the audience, and no part of the venue is off-limits. Even attendees in the balcony got to experience the musician close-up for a bit.

Franti not only sought to foster an intimate connection between him and his followers, but also amongst the fans themselves. Twice, he urged them to hug “someone you don’t know.” He also directed the audience to make spinning dance circles of 8-10 people and later instructed them to partner up with a stranger, lock elbows and do-si-do together.

His 2019 live performances have introduced two new songs that can’t be found within his deep catalog of recorded music, but their choruses can be found on t-shirts amongst his merchandise: “Good Shit Happens,” containing the chorus, “Bad shit happens, but good shit happens too,” and “Work Hard and Be Nice to People.”  Upon first hearing them, while I appreciated and embraced the messages, I thought that these simple concepts would be perfectly appropriate for a kindergarten curriculum. Upon further reflection, however, I realized that they are equally timely for the masses who have been beaten down by the horror, tragedy and challenges that modern life regularly presents. Franti is reminding people of their humanity and encouraging them to stay positive, essentially putting the name of his tour (and two of his albums, Stay Human Vol. 1 and Stay Human Vol. 2) into literal action.

If you are thinking this atmosphere of love and unity would be a great place for a marriage proposal, you are not alone. When Michael’s wife, Sara, accompanied him on stage to sing “Life is Better with You,” a couple from the audience joined them and the gentleman went down to one knee. (At this point, I’m wondering what will be next, a baptism??)

In the battle referenced in his letter to his son Taj, Franti clearly serves as a warrior on the side of optimism, but not all his music is sunshine and rainbows. He’s not afraid to address serious political issues. During his performance of “The Flower,” the giant video screen behind the stage displayed statistics of gun violence along with photos of families affected, while singing these lyrics:

During “We are all Earthlings,” through photos of endangered animals projected onto the screen accompanied by troubling statistics, Franti brought focus to another sad and scary topic: the rampant, ignorant and callous pillaging and murdering of the planet by humans for their insatiable consumption and greed.

Michael Franti has a lot of hits but he saved his most popular song until nearly the end, and when he finally played “Say Hey (I Love You),” he recruited a group of children to join him on stage. Few things bring more smiles then watching kids unabashedly grooving to good music.

After this, the musician played one final song, seemingly underlying his theme of the night with the chorus, “When the sun begins to shine, we’ll walk right through the darkness, out into the light.”

With their performance concluded for the night, per Franti custom, the band remained on stage and led the audience in a sing-along to John Lennon’s idealistic anthem of unity, “Imagine,” which resounded from the speakers.

Finally, wanting to acknowledge the talented and spirited musicians that help him deliver his sermons throughout the country, Franti introduced his band to the sounds of maybe one of the most soothing and hopeful songs ever written, Bob Marley’s “Three Little Birds.”

I have seen Michael Franti perform over the years and always had an admiration and fondness for him, but after experiencing this incredible celebration of compassion, conviction and positivity, these warm feelings have blossomed into full-blown awe. This is a man who cares deeply about the planet and its people, as much minister as musician.

Michael Franti’s extensive Stay Human Tour has just come to an end, but he will be performing next at San Diego’s Wonderfront Festival on Friday, November, 22nd. Beyond that, he is slated to support country singer and creator of No Shoes Radio,  Kenny Chesney, on tour visiting major U.S. cities this spring and summer.