A couple years ago, New York City area-based recording artist Alex Tea released the single “Gold Rush,” a wicked roots reggae number with a killer version remixed by sought-after studio engineer (and recording artist in his own right) Victor Rice. While the song was ostensibly about greed that permeates our society today, it could also be construed as a metaphor for the wealth of talent and creative vision that Tea has been mining for the stream of musical gems that he’s released since then, all of which feature dubs from the esteemed Mr. Rice.

Tea followed up “Gold Rush” with the On a Ride/Country Living EP which Rootfire had premiered last July, through which readers learned about his multicultural background, his lifelong passion for capoeira and his introduction to Rice through common friends in Brazil.

Tea closed out 2020 with the release of “Square One” and not long after that kicked off 2021 with “Don’t Ask Why,” two more lovely reggae songs to soothe the weary soul.

Today, Rootfire premieres “Charade,” another narcotic single which drops tomorrow. Once again, Tea demonstrates his ability to make a statement about the political ugliness around us while disguising it in blissful beauty, a trait found in much of the best reggae music that has graced the ears of listeners over the decades.

Alex Tea’s music does not command your attention by getting in your face, grabbing your lapel and shaking you. Rather, its sanguine, saccharine resonance draws you in like a petunia’s bright colors and pleasing fragrance attracts a hummingbird. This musical style reflects Tea’s personality; he’s soft-spoken, reserved, humble, sincere, nurturing, empathetic and attentive. Similarly, as a performer, he won’t dazzle you or blow you away with demonstrative gestures and powerful vocals, but instead produces a sound and vibe that invoke romance, serenity and felicity.

For his latest song, “Charade,” Tea called upon a well-known and widely respected pioneer from the American reggae community, John Brown Body’s vocalist Elliot Martin, to contribute a verse and some vocals. Tea spoke about how he had first met Martin about fifteen years ago: “I was working on my first original project called Kiwi the Child, and had a little pile of home-made CDs that I would hand out at random concerts and gatherings. On a visit to Ithaca, I caught a JBB show, or maybe a Black Castle show — I can’t remember exactly — and, a bit star-struck, gave a CD to Elliot, who I ran into after the performance. To my surprise and delight, he sent me an email with encouraging words about my songwriting, which was a huge inspiration.”

Continuing, he described how he and Martin connected for this collaboration. “Over the years, I had the privilege to open a few shows for them when they’d come out to New York City, and we have stayed in touch since. I’d been looking forward to a chance to collaborate with him, which first arose when he invited me to sing a verse on a tune (“Under Fire,” released on Facebook) last year. When I had the idea to get a guest vocalist on Charade, he was the first person that came to mind. He responded with a verse that really took the song to another level, contributing his talent with the same ease and style that had me stoked on JBB both back in the day and ever since!”

Tea produced “Charade” himself at his home studio, soliciting contributions from various friends remotely. “As I often do, I recorded the arrangement as a loose demo and sent it around to some very talented friends to replace my sketches,” he said.

The song begins with a prelude of flute and snare, which can be construed as carnival or circus music. This serves as an introduction to the opening line, “Enter a parade, charade, charade,” while mockingly alluding to the state of American politics.

Quickly, a resounding bassline tumbles forth, over which Alex’s delicate vocals provide a captivating juxtaposition, perfectly complimented by the harmonies of Vanessa Perea and Josh Adams throughout the song. With its three-part harmonies, gently picked guitar and brass accents, “Charade” harkens back to the golden era of roots reggae, when vocal/harmony groups dominated the soundscape. The blend of this trio’s singing in particular brings to mind a common favorite, Israel Vibration. 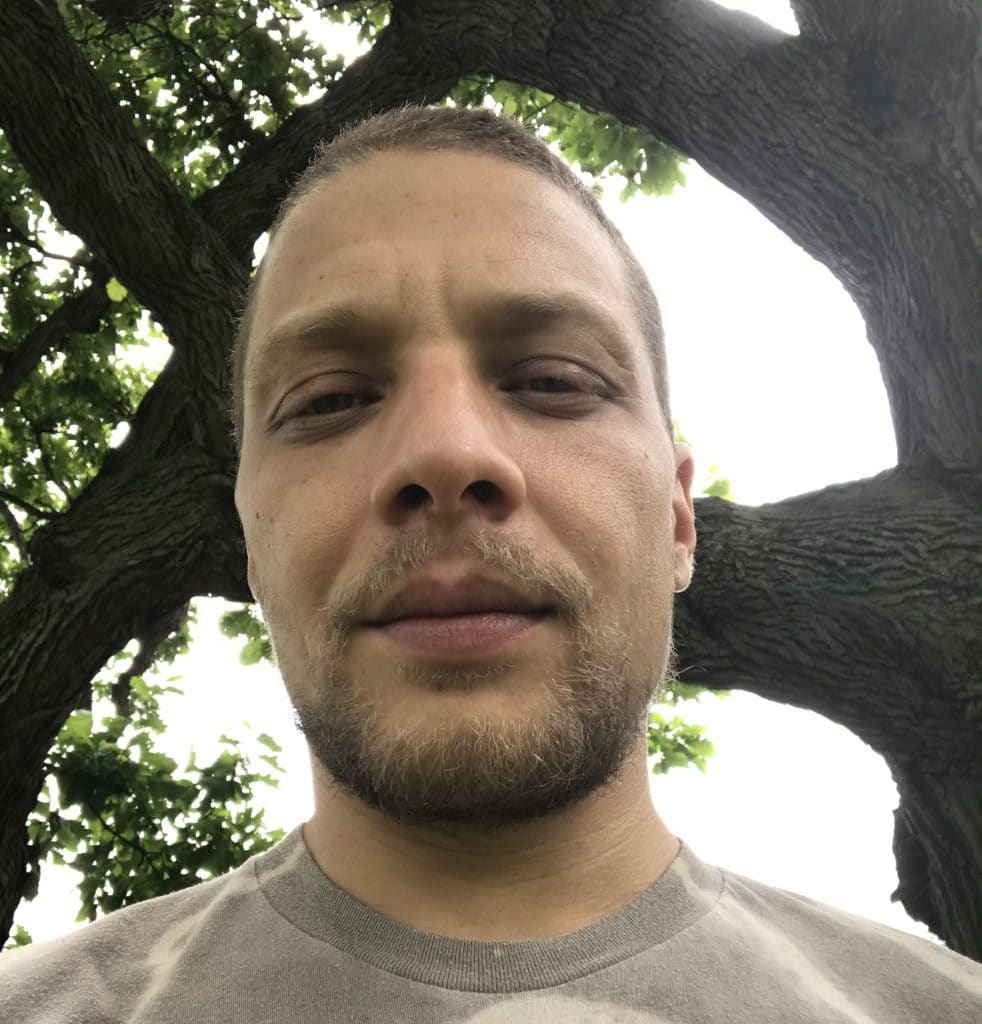 “Charade is a tune about society and politics,” Tea explained. “How we hide behind our projections, preferring to ‘act like’ instead of being honest with ourselves; choosing opposing sides instead of acknowledging that we are much more nuanced and complex than we like to pretend.”

This hand do, other hand oblivion

Scattered are the millions, to history obliged

Upside too, down to calamity

Should morning be a sanity and bathing in the light

“We sabotage ourselves with our double standards,” Tea said in reference to the above passage from the song. “We forget that we’re one group, brought to this moment on the currents of history, and standing on the shoulders of the generations that came before. For all the ups and downs, here we are together…may tomorrow bring us closer to truth and love.”

Tea and Martin share similar approaches to writing lyrics, and in his typical fashion, Martin partially shrouds his commentary in a veil of poetry yet reveals enough to make the point:

Left, right, they do wrong

Wolf in a Sheep’s clothing, all them hidden

Revealed, that story will come to an end

Many deceive, they have no love left in them

But they cannot get anywhere

We see them all through their masquerade

So enter the gate with the praise

Tea sings in a higher register not unlike Kevin Kinsella, Martin’s co-founder of John Brown’s Body, so when Martin enters the mix, the song sounds a lot like classic JBB. That is something Rootfire readers will surely appreciate.

Fans can pre-order “Charade” and its dub here.