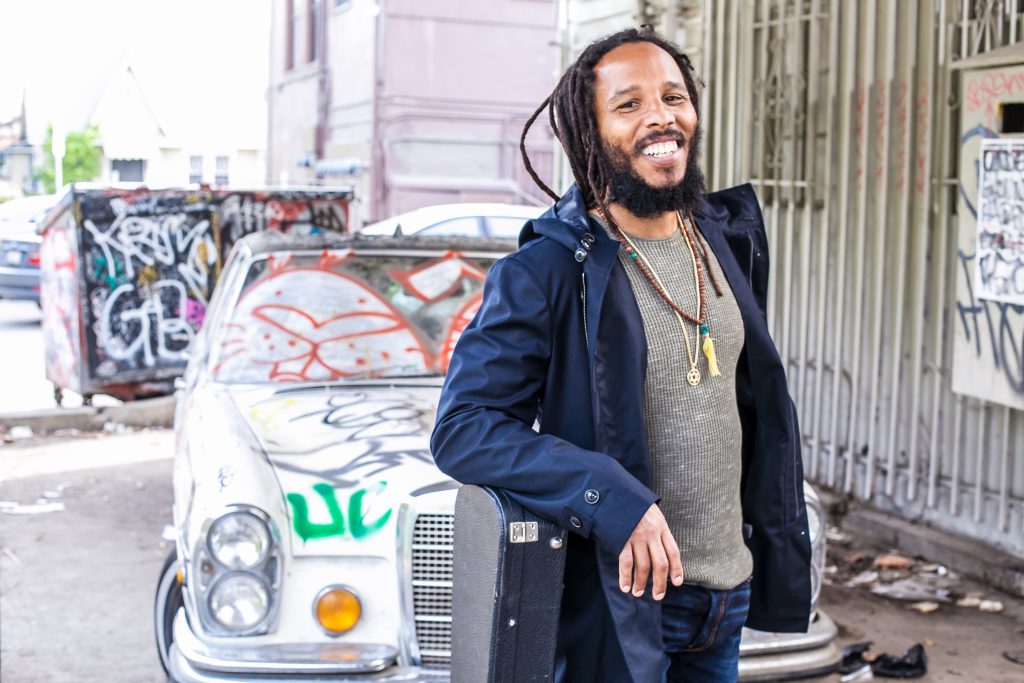 If Bob Marley were to look down upon the life of his eldest son, David “Ziggy” Marley, I would have to think he’d feel immense pride.  Inherently tasked with carrying on the Marley legacy as the first born son, Ziggy has more than lived up to the calling, both personally and professionally.  A devoted father and husband, he has eschewed the trappings of the rock star lifestyle and the gaffes that commonly befall the children of megastars, gracefully balancing the demands of his career while remaining a steadfast Patriarch, both to his immediate family and the Marley clan at large.

As the prince of reggae, Ziggy has been putting out meaningful music for over 30 years, amassing 8 Grammy awards amongst his 16 albums, most recently for his fantastic eponymous 2017 release.  His music also earned him a Daytime Emmy for his song I Love You Too, featured on the BBC/Disney Channel’s 3rd and Bird.  Speaking of children’s shows, he also wrote and performed the delightfully infectious Arthur’s Theme Song for the PBS educational series, now in its 20th season. These accomplishments earned him UCLA’s 2017 George and Ira Gershwin Award for Lifetime Musical Achievement, the first reggae artist to receive this award in its 29-year history.

Ziggy is not just a writer of music but books as well, authoring a graphic novel, a children’s book and a cookbook. The graphic novel, Marijuanaman, extols the virtues of marijuana and hemp as opposed to the more widespread solutions ingrained in our society through the pharmaceutical industrial complex. His children’s book, I Love You Too, was based on the song with the same title from his Grammy award-winning children’s album, Family Time. The Ziggy Marley and  Family Cookbook provides “ital” recipes from his family’s holistic Rastafarian culture as well as his wife Orly’s Israeli/Iranian heritage, while providing insight into the importance of eating healthy.

In addition to his music and writing, Ziggy has done voice over work for the Dreamworks computer-animated film, Shark Tale and acted in a recurring television role in Hawaii Five-0.

Musician, author, actor, entrepreneur, family man and finally, humanitarian. Ziggy’s business ventures give a portion of proceeds to his charity, U.R.G.E (Unlimited. Resources. Giving. Enlightenment), which seeks to improve communities where children live and grow by supporting education, health and the environment.

Of course, all of these other achievements mean so much more given that their executor, for the past three decades, has been composing and performing heartfelt, inspirational music for audiences around the world.  Ziggy’s large catalog of music has encapsulated all of the elements of what makes reggae music so unique and endearing –  uplifting, spiritual, message music that prompts people to sing and dance.  His songs vary from a personal focus – themes of love and self-realization —  to a broader lens – commentary on the state of society, appeals for social change.  Much like his father and other pioneers of reggae music, Ziggy is a champion for the people, rallying them to stand up to the “shitstem” (system) — but unlike other rebel music, he does it in a positive, peaceful way.  His music advocates for individuality with unity. It makes you want to be a better person.

As amazing as Ziggy’s studio music sounds, the true essence of his Marleyness comes through during his live performances.  Shirt soaked with sweat, dreadlocks whipping around, this bundle of energy bounds across the stage like Rastafarian quasar.  In addition to inheriting an abundance of talent, a reactive consciousness and a tireless work ethic, perhaps the most recognizable trait that he shares with his father is his magnificent, beaming smile. 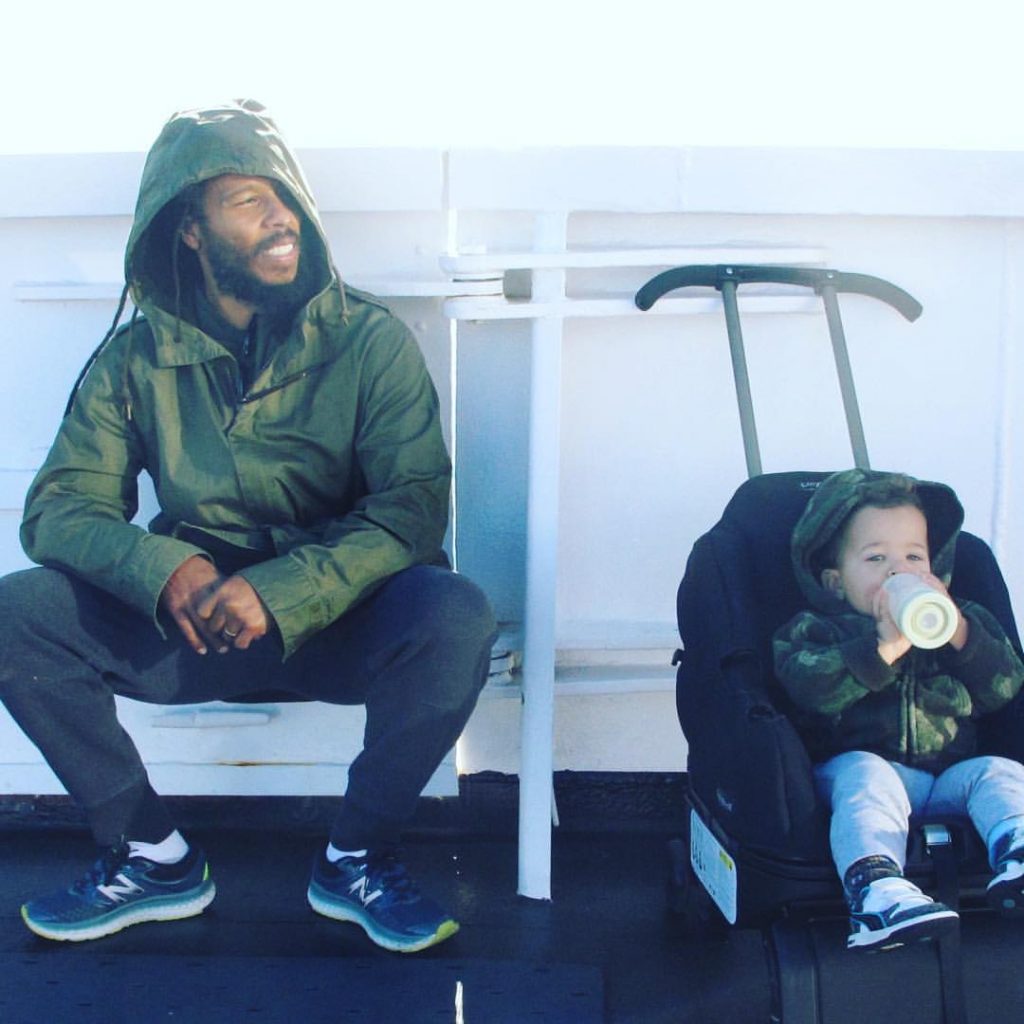 RF: In the past decade, the American reggae scene has grown exponentially and features some very talented artists.   I’m curious if you are aware of this, if you’re familiar with any of the bands and what your thoughts are in general of the direction of this music in America, Jamaica and worldwide?

ZM: Reggae music is (always) a universal music so we expect it to grow and spread and what’s been happening in America is good. All dem band yah, some of dem bands from the west coast an ting, ya know? It’s all good to me. For me, the most important thing, with any music, is the message —  what you’re saying in the music.

RF: It often feels like our world is sinking into an abyss with all of the strife – terrorism, political conflicts, crime.  Every day seems to bring a new tragedy. Combine this with the rigors and challenges of day to day life, and sometimes it’s really difficult not to let it all grind you down.  In my household, we rely on your music and other reggae artists to keep our spirits up.  How do you keep your spirit up?

ZM: Same ting mon!  Listen to my music, listen to reggae music.  Same ting like you do mon.

RF: It’s not uncommon for the children of the rich and famous to live self-absorbed, hedonistic, trouble-filled lives. Yet, you appear to have kept it all together, staying focused on what’s important – your family and your craft.  Do you attribute this to your upbringing, and if so, to anyone or any aspect in particular?  Did you have any mentors or role models that greatly influenced your approach to life?

ZM:  Well it start out with yuh parents and the people around you.  (Pauses to think) You haffe have an open mind. You haffe be willing to search and to seek and learn and be humble. That is the key, I think. (Another pause) I think every human being that I ever interact with is a part of my growth.  So it’s everyone really, but like I seh, it start with the parents, and den you have to have an open mind and a humility and a willingness to learn and to change and not be stuck in one ideology or one way of thinking. There is so much out there to know —  knowledge —  so much wisdom out there,  that anyone would think that dem know it all right now.  Everyone thinks that everything is written in a book — that’s the whole of it now.  There’s too much out there.  So that is what it takes, ya know?

RF:  My girlfriend works in a school for special needs students who have a mix of physical and mental disabilities.   The educational leaders typically insist on playing pop music for the students, but lately she has been able to get them to play your music, and it’s had a very positive, calming impact on the students.  Are you aware how much your music affects people?  Do you ever read fan correspondence from Facebook, Instagram or Twitter?

ZM: Yeah mon every now and again we hear some stories, but that is good, seeing a positive ting that is happening.  And yet still, is not somet’ing I have to think about too much, to say, you know, I just need to do what I’m doing.  I’m happy that the music is having positive effects out there —  that is what we want and I’m happy to hear that it does —  but still, when I think about it too much, when I mek it go to my head, it doesn’t a go do it the same way, with that truth and realness.

RF: In addition to the wonderful music you make, over the past decade or so you’ve been involved in a number of other projects, including the graphic novel Marijuanaman, the children’s book I Love You Too and of course most recently, the Ziggy Marley and  Family Cookbook.  Can you tell me a little bit about how Marijuanaman, the comic, came about?  It preceded the song by the same title on 2016’s self-titled album, so what is the relationship there?

ZM:  Well the song started long time ago. Many many many years ago.  We do what we feel like to do, without thinking about anyt’ing. The song was way before, and the song kinda lead up to the graphic novel idea and we decide to put it pon the last record.

RF:  Thinking of the cookbook, what is your favorite food to eat? Do you have any guilty pleasures?

ZM: (Thinking for a moment) I like eggs. I eat a lot of eggs. From out in Jamaica, growing up, I think they got me hooked on eggs! My aunt and these old ladies, they’d bring eggs from the chickens every morning…. But me like sweets sometime, me like some sweet stuff, cupcakes or somet’ing like that.

RF: I read that you had premiered two new songs via the television show Hawaii Five-0, which also employed you as an actor in a recurring role for a character named Bones.  Could you tell me a little bit about how that connection came about and your experience working on the show?

ZM: It works thru the music, the music started it. And then, as I said, I had an open mind, and I was willing to kinda explore doing some of the acting stuff, even though I was kinda shy…but it’s a ting where you take a chance and yuh happy to learn something. Because the acting, what I did on the Hawaii Five 0 thing, is another experience that I spoke about with other human beings that teach us to grow as a person.  Even the act of acting, where you haffe kinda let go of your own self, in a way, for me, was a good exercise.

RF: In addition to your music and writing, you’ve also branched out to selling merchandise revolving around the consumption of marijuana such as dry herb vaporizers and concentrate pens.  I’m curious how these new ways of consuming marijuana , such as in liquid or concentrate form, are viewed within your community.  Have people adopted these new methods or do they tend to just stick to the basics, a chaliss or big fat spliff?

ZM: (Laughs heartily) All of the above!  Every day, any way, mon!  There is no judgment or criticism, ya know?  We just smoke de herb, mon, ya know? Do what yuh wanna do.

RF: Ziggy, thank you so much for taking the time to speak with me today. I really appreciate it.

Be sure to catch Ziggy Marley perform live this July as he tours the Midwest and East coast, highlighted by a headlining performance at Marshfield, MA’s Levitate Music Festival.

Sunny Trails Yoga at Rootfire In The Emerald City →