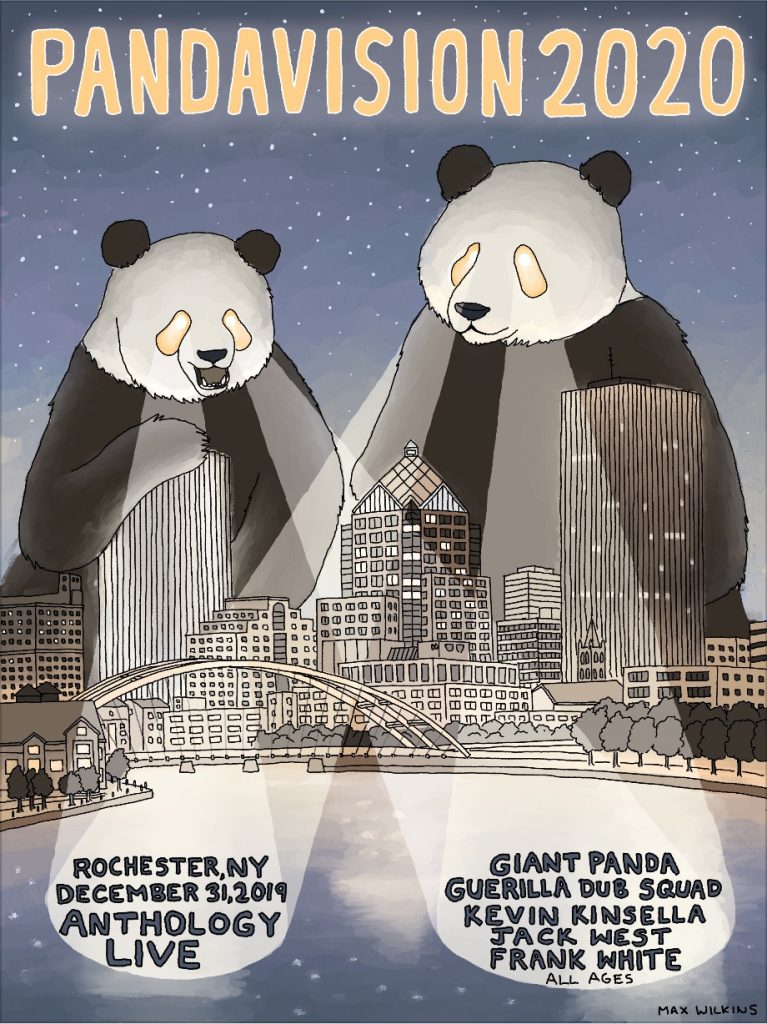 In a vast sea of modern reggae, Giant Panda Guerilla Dub Squad stands out to me as something truly special. This upstate New York based roots-music band has gone through many eras and phases, eternally reinventing themselves again and again. And being from the Northeast corner of the U.S. myself, as they are, I took advantage of my opportunities to witness many of these eras unfold live and in the flesh. I am lucky enough to have gotten to know these amazing musicians on some level and watch them change and grow. So I was very excited to get the inside scoop on their newest manifestation, by speaking with their newest member, guitarist and singer Eli Flynn. This chance came to me serendipitously just before finding out that this musical powerhouse would be making the journey out West and our two bands would share the stage for a run, GPGDS meets Dubbest on the West Coast, coming in late February of 2020. Needless to say I had a vested interest in the current state of one of my favorite bands of all time and was happy to dig into it with Eli:

Ryan: What is your musical history? Have you played in a lot of bands?

Eli: Music has been a central component to my identity for as long as I can remember. Collaborating and performing with artists around upstate NY was crucial to my introduction with Giant Panda. My band, Upward Groove, was given the chance to open for Panda at their annual hometown NYE concert in Rochester, NY at Anthology (Dec. 31st, 2016). While this was my first formal bill share with the guys, I had long been in admiration of their sound and history as a musical force to be reckoned with.

Ryan: How long have you been a fan of Giant Panda Guerilla Dub Squad and how did you originally hear about them?

Eli: I first heard of GPGDS through a close friend who encouraged me to go see them in concert at Water Street Music Hall (Rochester, NY). I was 16 and chomping at the bit to experience any form of live music, even if I had to sneak in or show a fake ID! I remember when we got to the door, the bouncer took one look at our young faces and told us to get lost. Through a foggy window, I witnessed the first glimpse of a spastic bass player dripping with sweat and singing his heart out to an entranced audiece. I guess you could say, I wasn’t exactly sure what I was missing but I was hooked.

Ryan: When and where was the first time you really got to see them live?

Eli: I first officially saw the band at an outdoor concert series called Party In The Park. This summer experience was a staple in Rochester and still is to this very day. This was about two years after my first failed attempt to catch the group. I was hooked. I don’t think I stopped moving for the entire 2 hour set. I said to myself, “How do I make music like THESE guys?!”

Ryan: How did Giant Panda hear about you and what was the auditioning process like?

Eli: James Searl happens to be a long time family friend of the Flynn’s! I found this out around the same time I saw Panda for the first time. Almost immediately, I messaged James and sent him some of my band’s original music to which he was quite complimentary. I guess there was no formal audition process. Over the years, I viewed James as an instrumental sounding board on all things music and life. We developed a cool friendship in which he was super important to my musical growth and development.

Ryan: When did you officially join Giant Panda and what have you done with them so far?

Eli: I joined Panda in the Spring of 2019. We hit the road for a brief east coast run that lasted about one week. Since then, we’ve gone as far south as Kentucky, spreading good vibes in a series of long weekend runs including headlining festivals with bands like Tropidelic, Barika, Rubblebucket, Robert Randolph and more. I’m stoked to be releasing my first single with the fellas entitled, “Good Love” which I composed while on the road. Keep your eyes peeled for the release mid-January!

Ryan: How is it rehearsing with these guys and learning all these new songs all at once?

Eli: Funny thing, I would sit around and learn Panda tunes all day long, even before I was asked to join! It made the official introduction fairly smooth. We had a total of 3 rehearsals before I hit the road on my first tour with the guys. While it was a little nerve racking, I received some awesome compliments and feedback that made me feel right at home!

Ryan: Do you sing in Giant Panda? If so are you doing lead vocals and/or harmonies?

Eli: Yes. I sing lead on the original tune we just tracked. I also sing harmony vocals on nearly every tune, and sing lead on our reggae cover of “A Change Is Gonna Come” by Sam Cooke, one of my personal favorites.

Ryan: Are you playing any lead guitar with the band?

Eli: HELL YEA! These guys give me plenty of space to rip.

Ryan: What are your other influences? Has reggae always been a part of your life and if so, what era of reggae is your specialty?

Eli: I consider myself a fairly diverse musician. My guitar playing draws from a number of players including Hendrix, John Frusciante of Red Hot Chili Peppers, and John Scofield. My reggae knowledge has been greatly expanded upon since joining GPGDS. These guys know their roots!! I remember my mom blasting Marley’s Legend in her 1990 Volkswagen Jetta when I was around 6 years old. Reggae has had a special place in my heart ever since. Currently, I’ve been jamming to Pachyman’s In Dub record.

Ryan: How do you feel about the folk side of Panda’s style and are you as comfortable with the country as the reggae?

Eli: The Folk/Americana stuff is always something special. We recently had a show in Ithaca where we featured tunes from Bright Days and Country. Honestly, it was an amazing excuse to show off some country/western chops. It’s a cool little era of Panda history in which the fellas nodded their cap to beautiful traditional Americana sounds while offering crucial perspective on social reform.

Ryan: What were some of your favorite Panda songs before you joined the band and how has that changed? Which are your favorite ones to play live?

Eli: Man, this is a tricky one. To play, I’d have to go with Seasons Change. Something about this rhythm just gets me moving both on and off stage. And honestly, it’s hard to nail down a favorite tune that we currently play live. Our live set has a life of its own. The songs move in and out, up and down, backwards and forwards. Favorite Set? Ithaca Grassroots 2019 hands down! That night was powerful and electric. We played to a crowd of thousands who were hanging on to each rhythm and every lyric. This feeling is challenging to put into words but effortlessly speaks for itself.

Ryan: All of the guys in the band are obviously well versed on not only music history and music theory, but also about the world and current events, etc. What have you learned so far from being with the guys musically and otherwise?

Eli: I’m constantly inspired by everyone in this group. Not just the outstanding musicianship, but in all aspects of their mission. I’ve learned to write with stronger purpose, listen with precision, and advocate for justice. Quite honestly, it has been the experience of a lifetime thus far. I’m fortunate and blessed to be surrounded by my heroes in the name of creation! Stoked for what lies ahead!

Catch Giant Panda in their current form on New Years Eve at Anthology in Rochester, NY as well as Denver, CO on February 14. After that, they hit the West Coast with Dubbest starting February 19, 2020 and culminating at AZ Roots Music and Arts Festival on February 22 in Phoenix, AZ. Visit www.livepanda.com for their touring schedule, to keep up with these guys and support modern roots music. 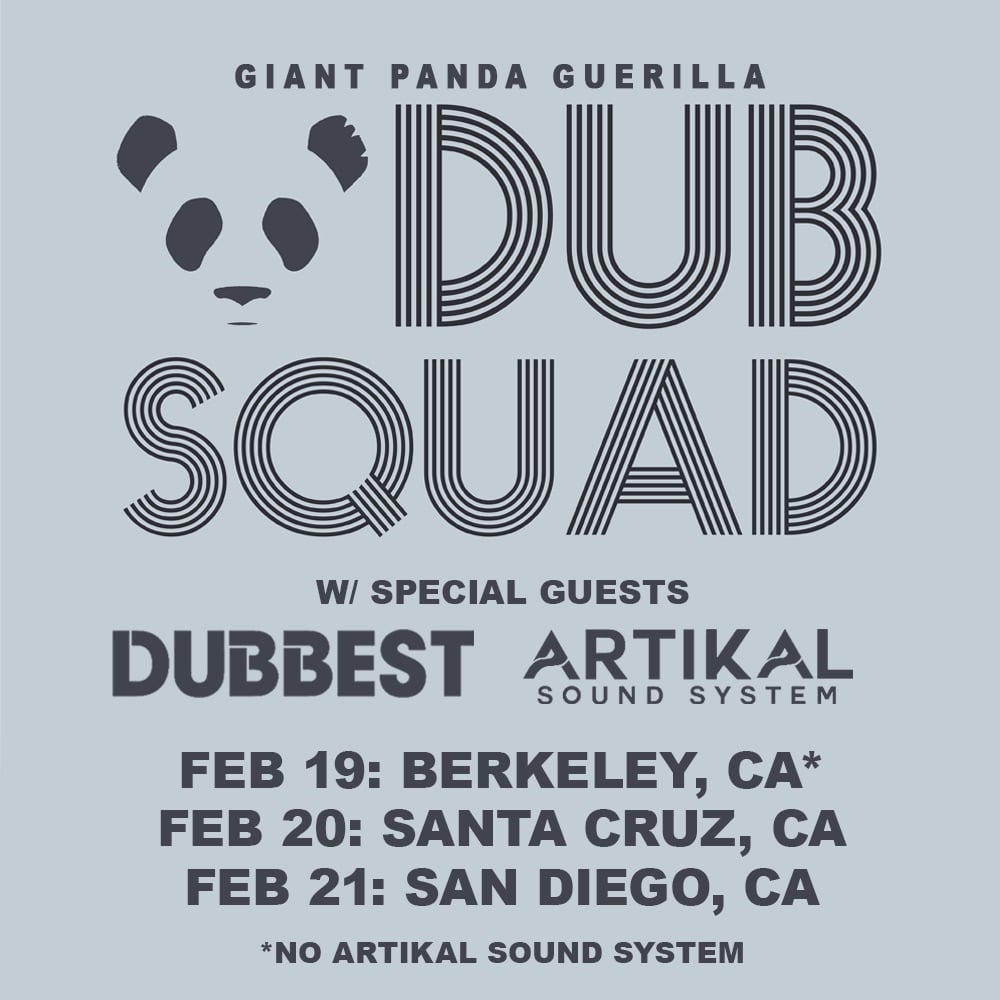 More in ‘Two On The Mic’