It’s hard to know how to begin talking about a band like Midnite. Even the usually all-encompassing label of “band” feels like an inadequate way to describe the phenomenon of this groundbreaking St. Croix roots unit. So much of the way they operate falls outside of the normal and familiar. For example, it is often stated with amazement that Midnite has released over 70 full-length albums since their debut record “Unpolished” in 1997. But that paints a somewhat skewed picture of reality due to the way the Midnite name has been used.

The Midnite band was founded by and always consisted of Vaughn Benjamin on lead vocals and brother Ron Benjamin on keyboards (and later bass). The rest of the lineup would shift from time to time. Ron produced the music, and Vaughn wrote the lyrics and sang the songs. When that brother duo was involved, the resulting project was released as a Midnite record. There are eleven of these, including one dub record. But because Vaughn has one of the most incredibly over-active brains of any musician I’ve ever come across, and is capable of a seemingly endless flow of rapid-fire, original, unique and powerful lyrics, he has always been eager and willing to work with producers outside of the core Midnite band. When released, these collaborations bore names like “Midnite/Ras L Collaboration” and “Midnite/I-Grade Collaboration” and account for the majority of Vaughn’s recorded output (and some of his best work). Because any project Vaughn was part of bore the Midnite moniker, it is technically accurate to talk about the huge number of Midnite albums in existence. But it is more accurate to say that Vaughn Benjamin, rather than the Midnite band, has released 70+ albums.

I happen to be a huge mega fan of all Vaughn Benjamin’s work. He is at the tip-top of my all-time favorite list, right there with Bob Marley and Leonard Dillon. I find something to love about almost every one of his releases. My favorite songs and records change all the time. But to me, and I think to most people who have had some dose of Midnite in their life, 1999’s Ras Mek Peace, released October 12, 1999 occupies a unique and untouchable place in the Midnite discography.

The song writing and the musicianship are enough to make this one of the best Midnite albums. But it is the way that the record was recorded that truly makes this a stand alone work of living poetry and art. It is essentially a live album recorded in the studio with no audience. The band recorded straight to a two-track tape machine, a device usually used only at the very end of a recording project to capture the final edited mix. There was zero post-production. I’ll say that again. There was ZERO POST PRODUCTION on this record. That means that what the band played and sang live in the studio went straight to the final tape. For purposes of understanding, it is essentially as if the engineer hit record, the band played the song, and when they finished, the result was exactly what we hear now when we pop in the CD. No going back and re-doing a wrong note on vocals. No mixing board to adjust levels. No EQ to get a better bass-tone after the fact. Not even any reverb or delay. As an experienced studio musician, this blows my mind to think of. The fact that the resulting album is as great as it is is an incredible testament to the skill of this group. And as impressive as all the musicians are for rising to this monumental challenge, like all the Midnite records, it is Vaughn Benjamin who comes through with the most mind-blowing performance of all. There isn’t a bad-note on the entire record. Some of the tunes he sings on Ras Mek Peace remain among his best to this day, and contain early examples of his masterful lyricism.

There is the heavy heavy “Rastaman Stand”, one of the staples of their live shows over the past twenty years:

“Playground see saw tells the story
Heavy goes to the bottom, light to the top
Illusion make the ugly look like the cream of the crop
They never run the race and want to take the victory lap.”

or “Hieroglyphic” on which he gives a sample of his genius command of language and ability to discover hidden meanings within words:

“Them a play them a angel-straight
I-man done see what them a demon-straight (demonstrate)
Them no bother consume love before them consume hate (consummate).”

or “Banking In The Pig” which contains the following psycho-analysis of the symbolism of the piggy bank in modern capitalism:

“Banking in the pig
Banking in the filthiest thing
And then they call I-man the sons of Ham
And call man color pigmentation
Man thief money and he’s a swindler
Why them love the swine could be no simpler
Piggy bank is a psychological thing
Implication is only the filthy rich win.”

and of course the iconic opening track “Pagan (Pay Gone)” which includes one his best known play-on-words:

“Living in a system, pagan
Every time you get pay, pay gone…
Now thief is a murderer
Guilty put a lie sense pon his trigger finger
Imposter is a murderer
Baldhead with dreadlocks come replace Rasta.”

The 1999 CD release of Ras Mek Peace includes a great booklet that begins with an extensive description by engineer Pierre Sprey of the recording process, as well as full lyrics sheets for each song. Because I couldn’t find them anywhere online I have included the booklet in full below as a series of images. The album is not available on Spotify, so I gathered the tunes into a YouTube playlist posted above. But I highly highly Haile recommend tracking down and ordering a physical copy of this CD. As time goes by this album sounds better and better, and is well entrenched as one of the essential records of “modern” reggae music. I’ve listened to it hundreds of times, and listening to it again while writing this article sent the usual chills down my spine. Twenty years after it’s release, I remain thankful for Ras Mek Peace, Vaughn Benjamin, and Midnite. 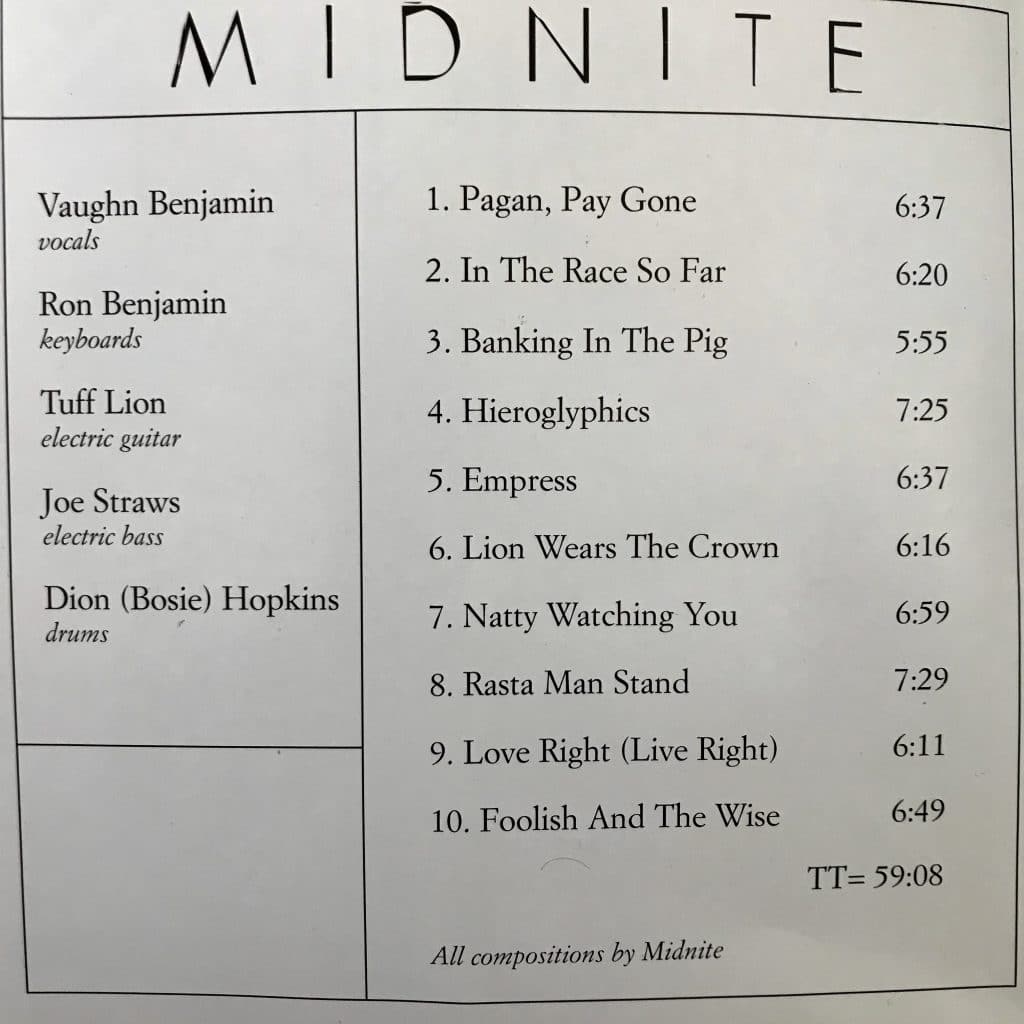 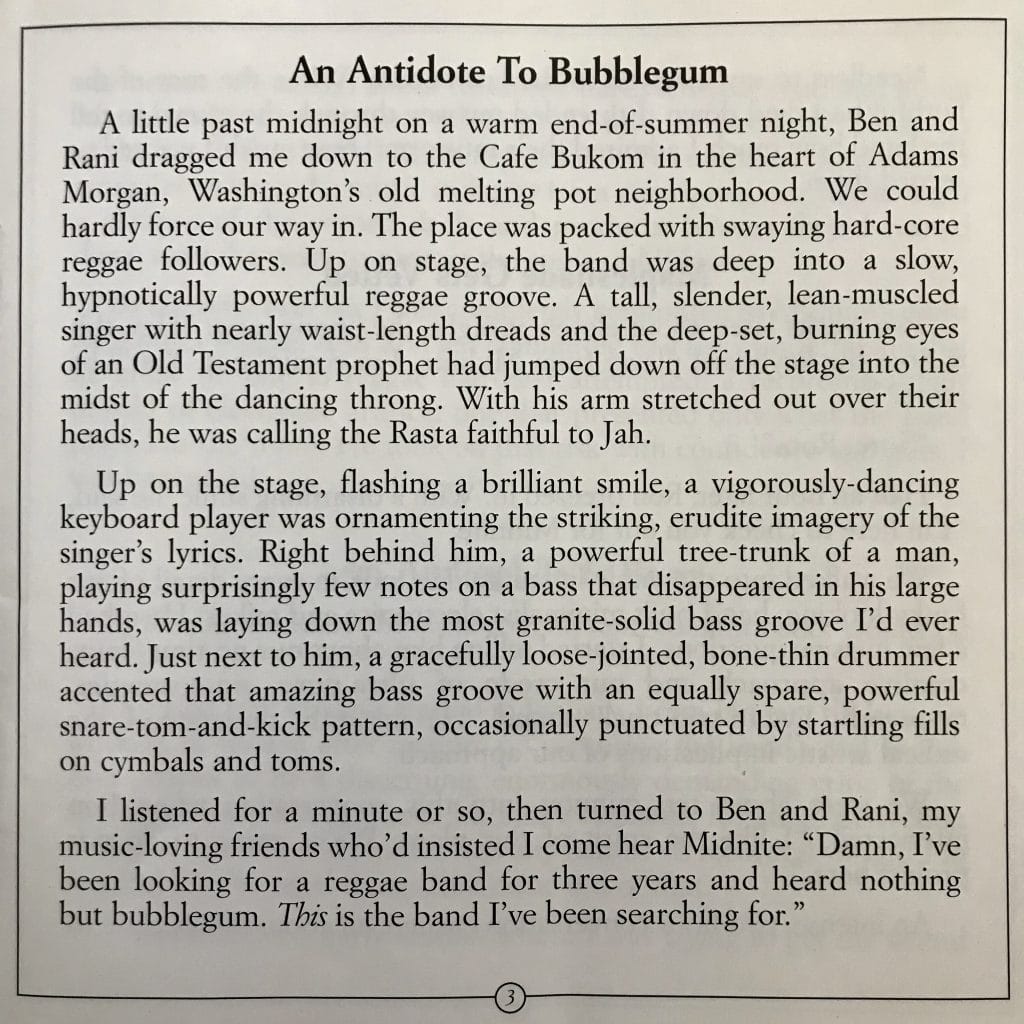 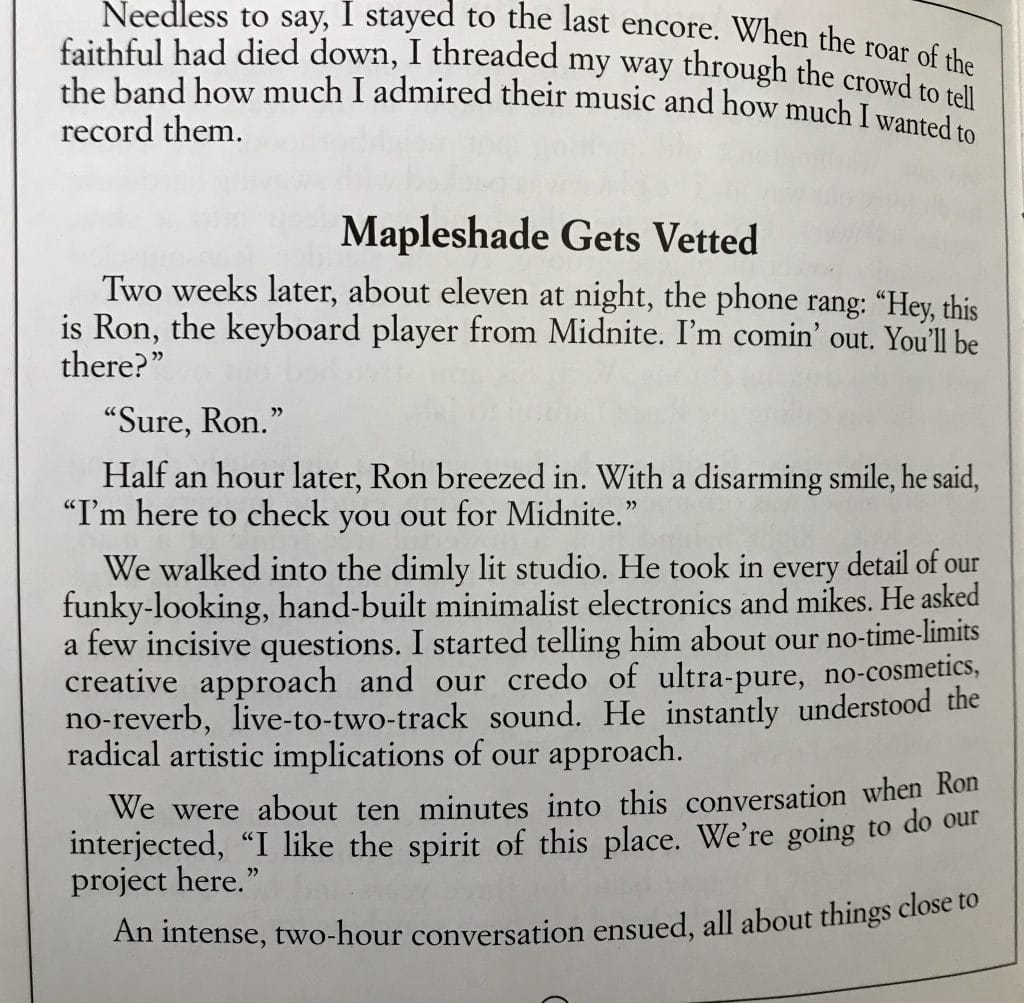 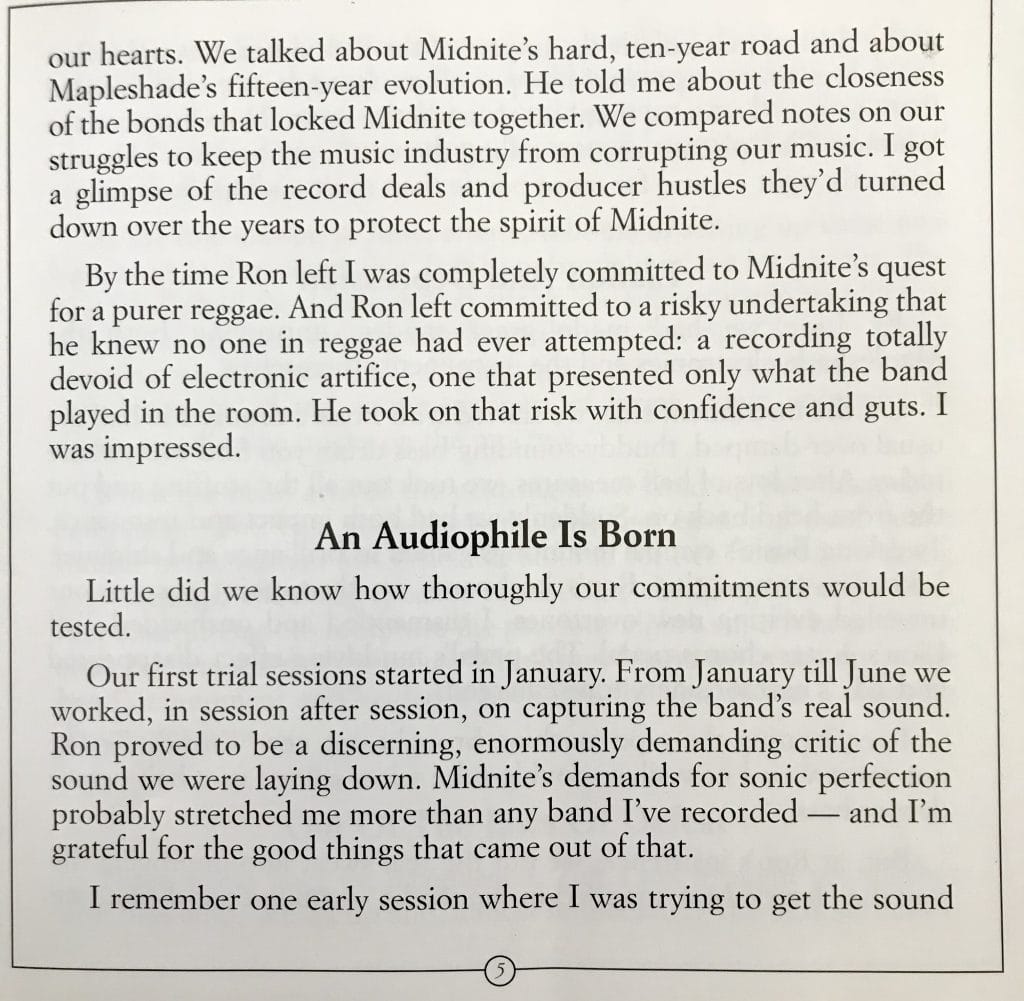 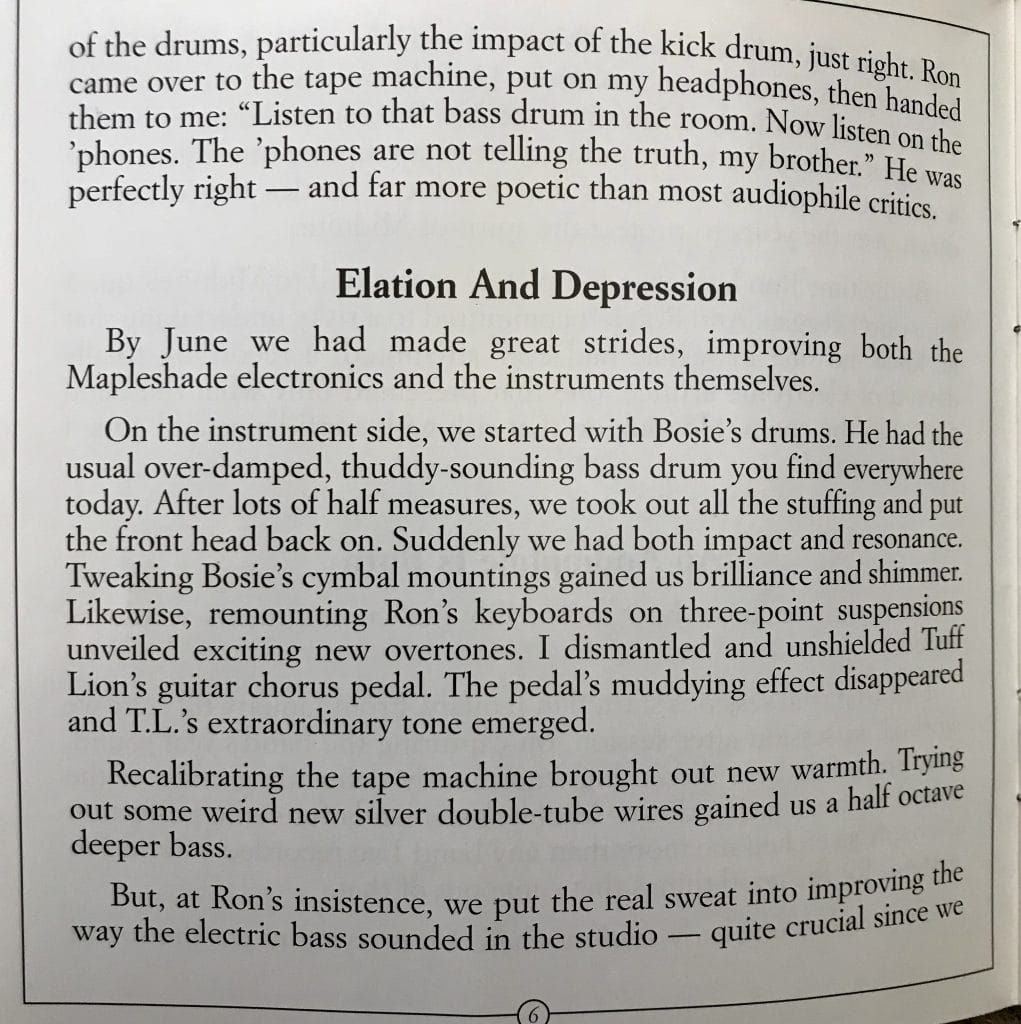 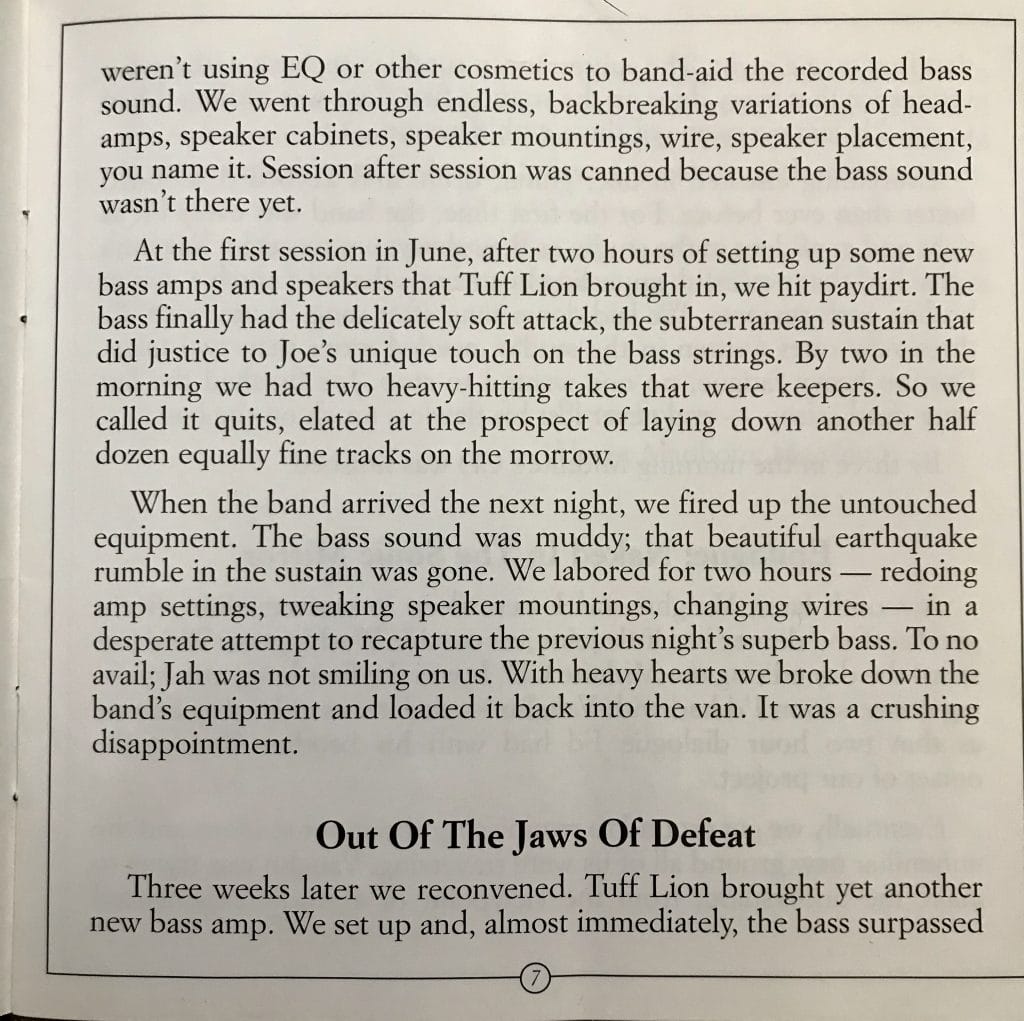 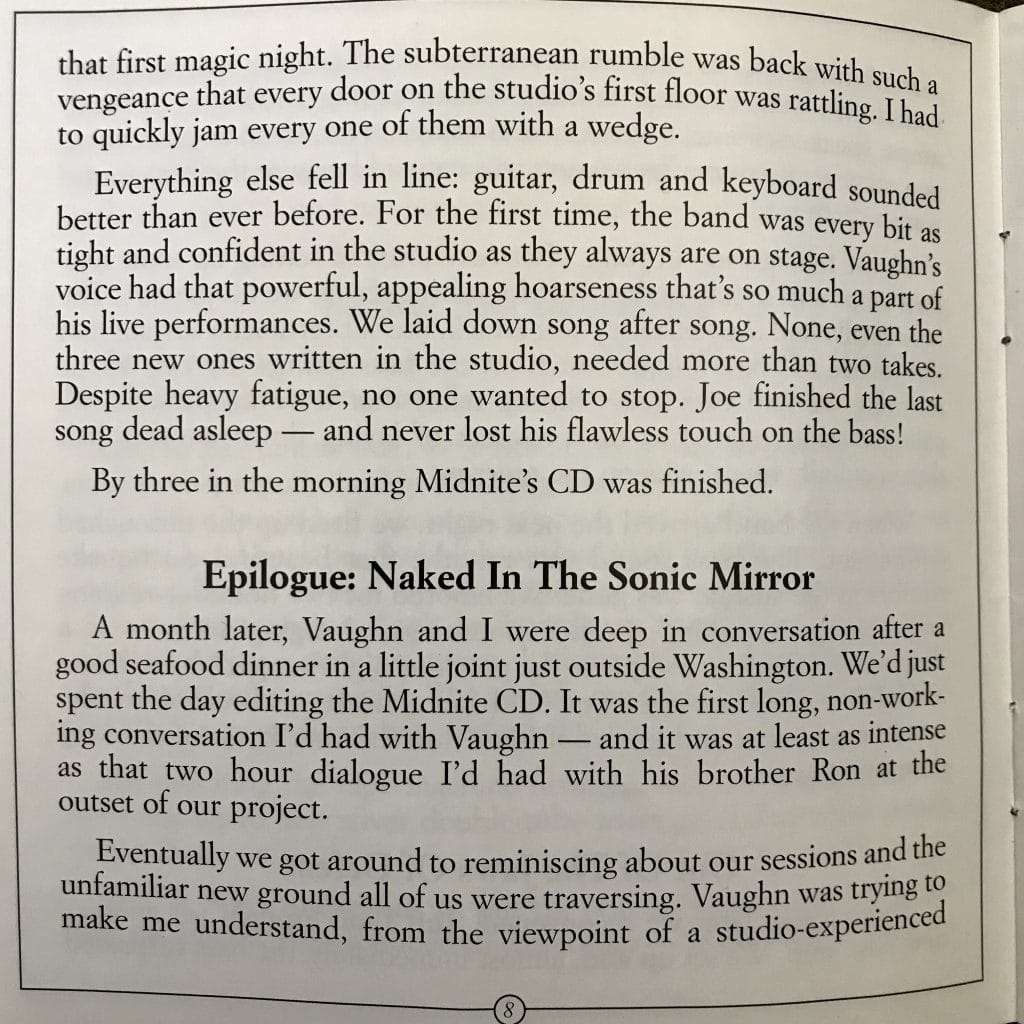 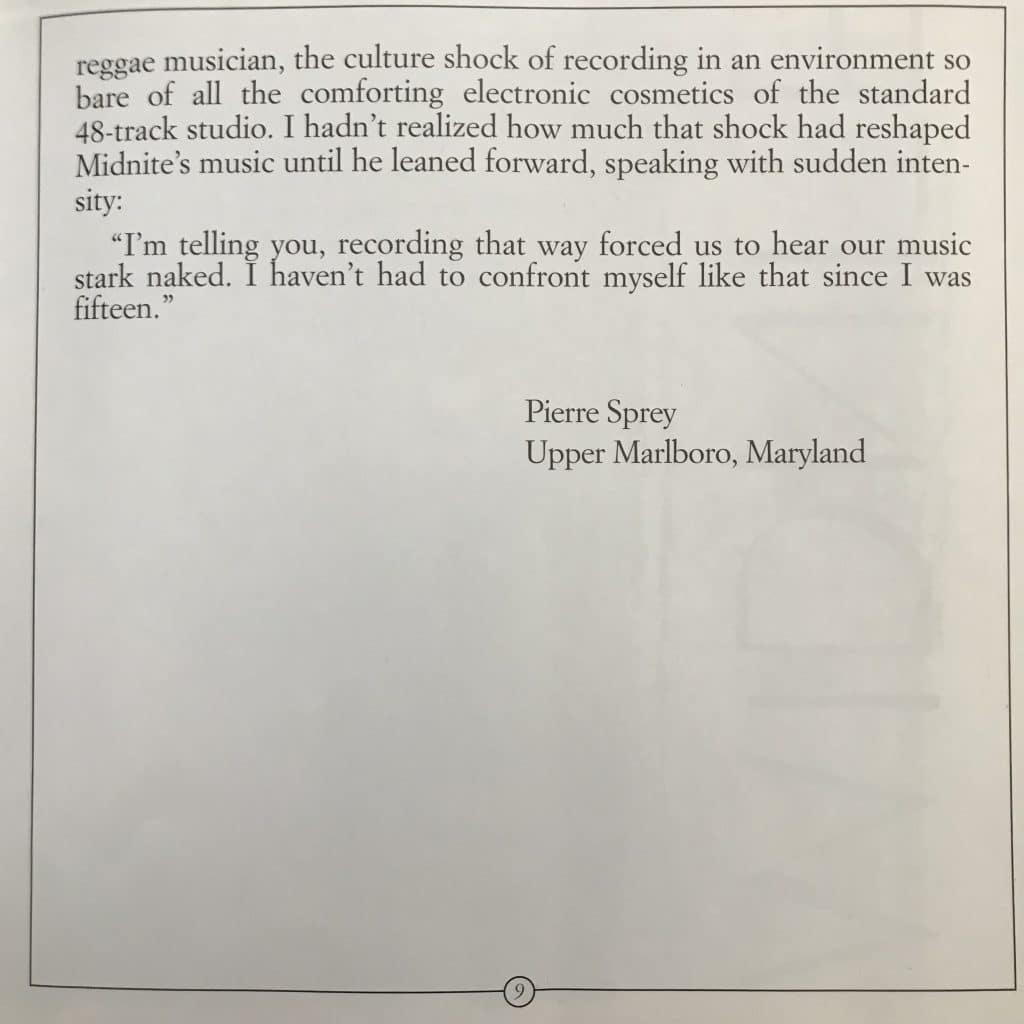 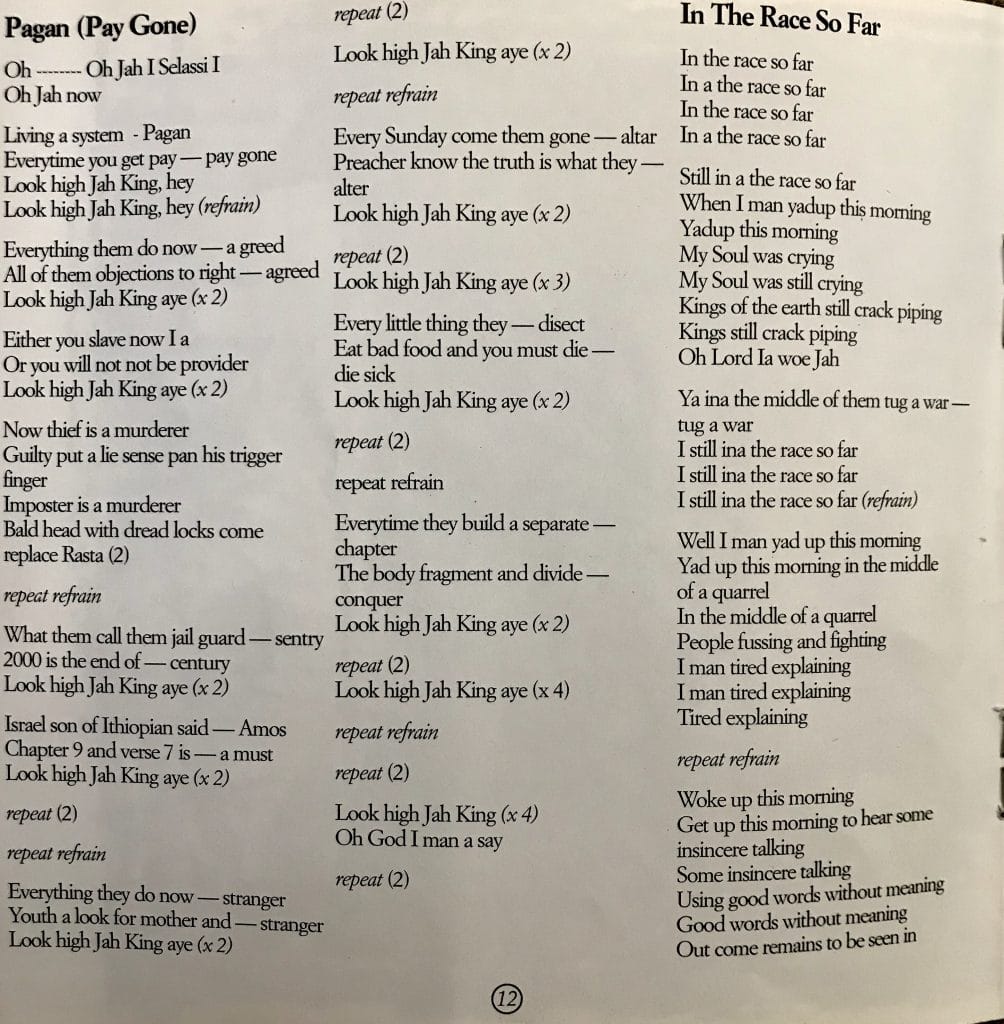 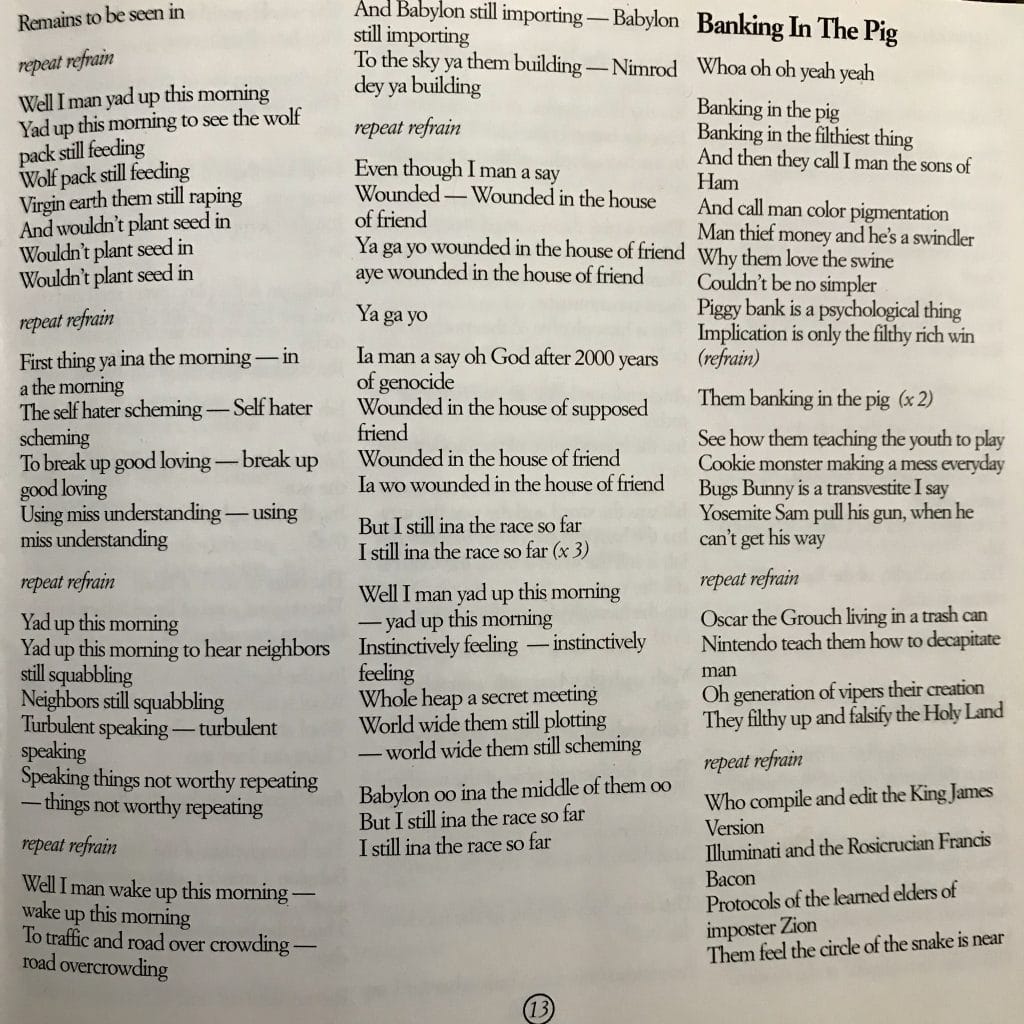 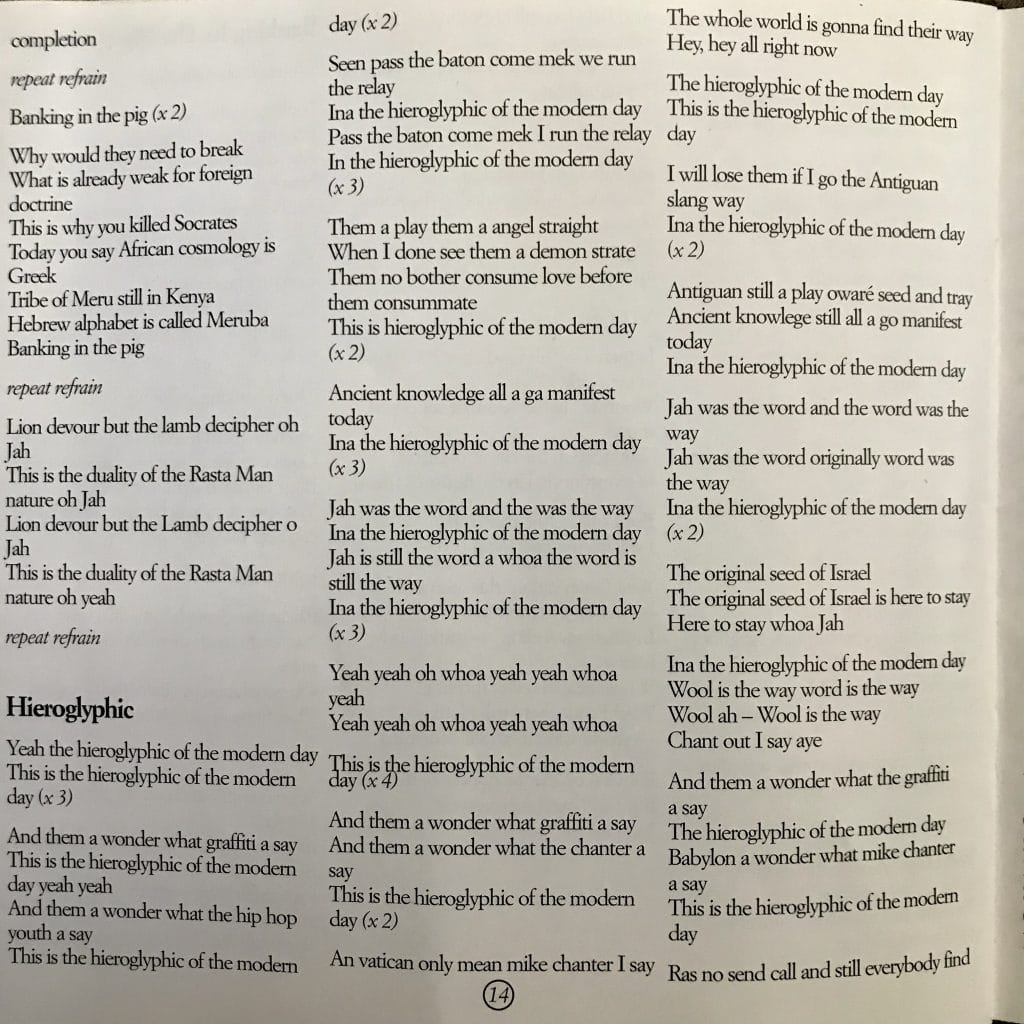 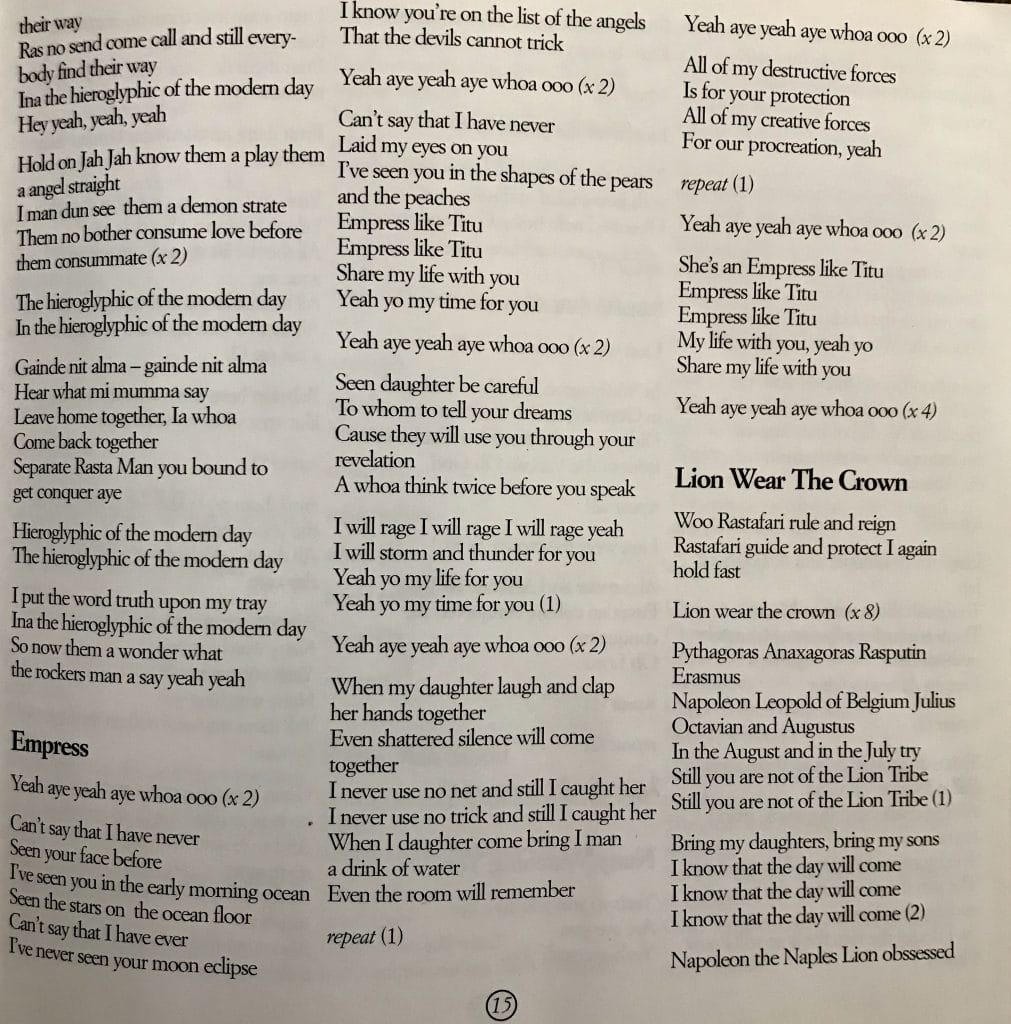 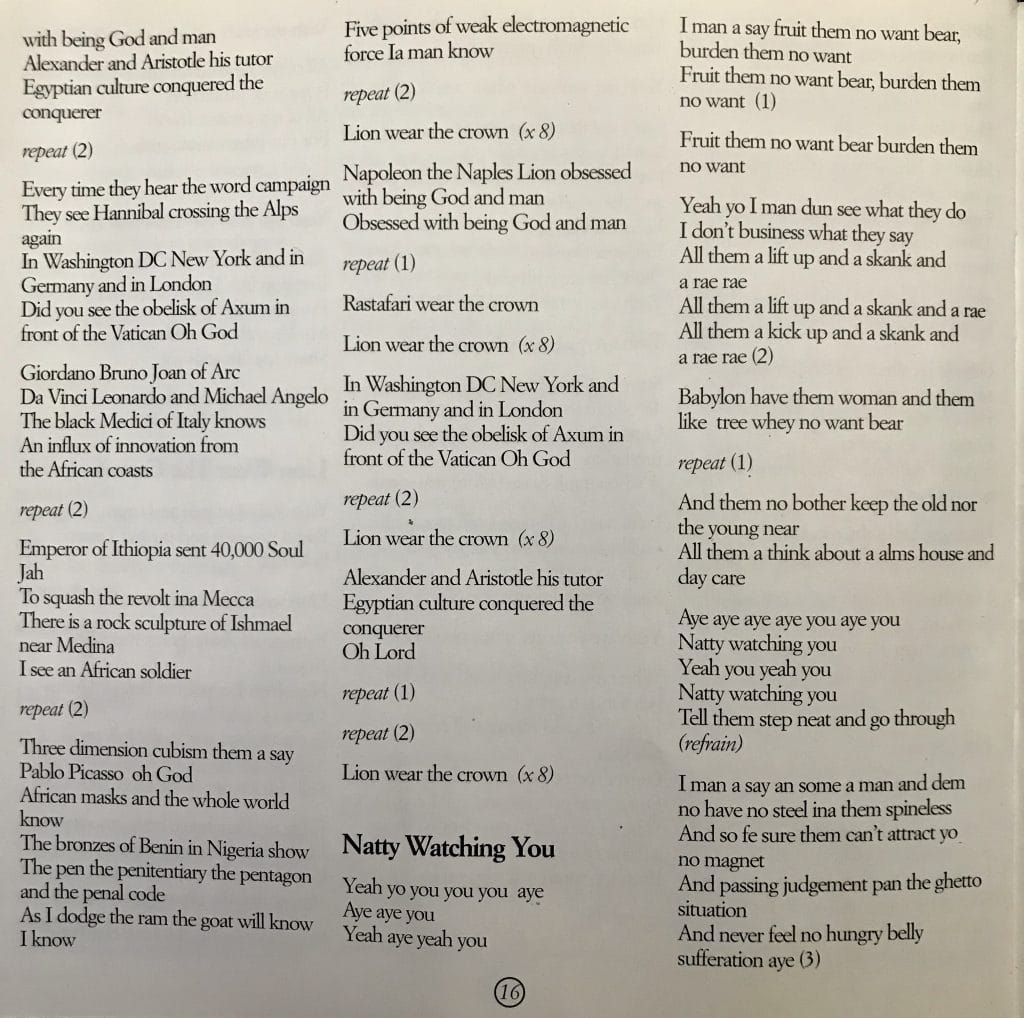 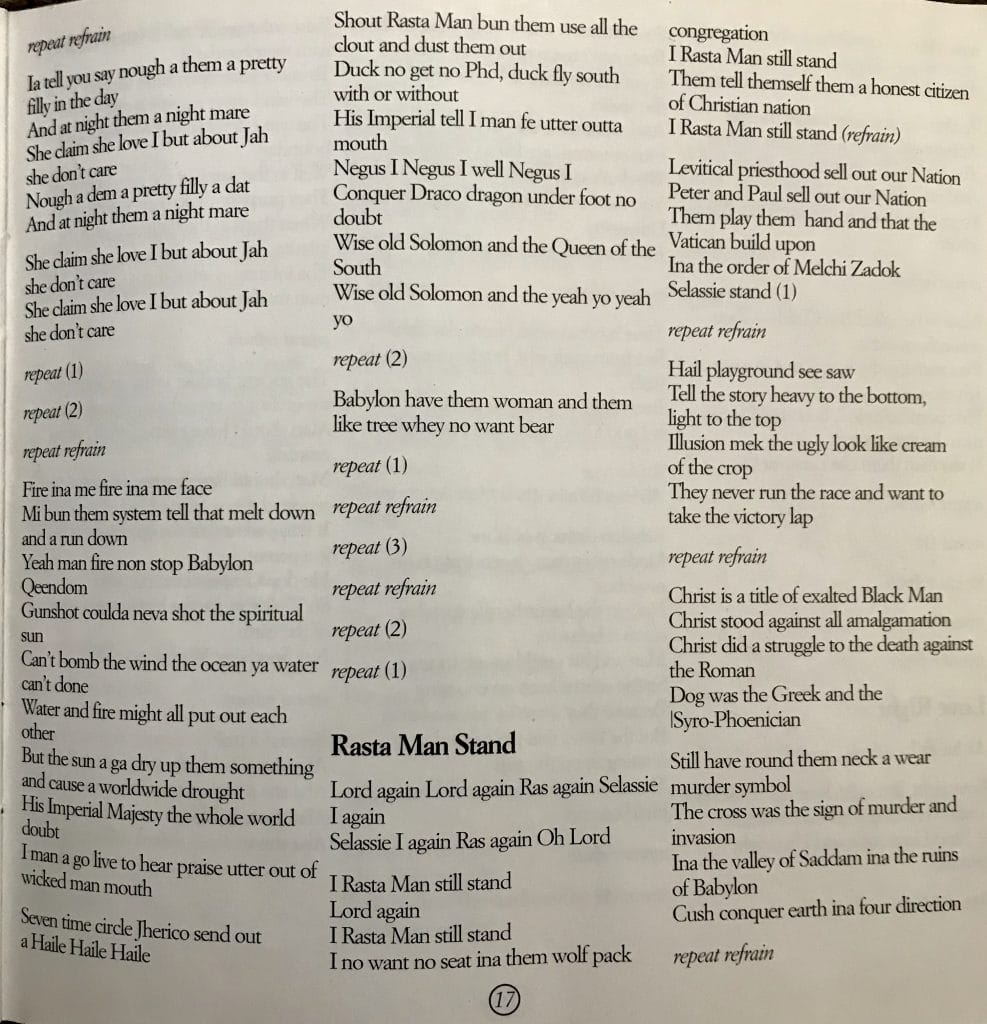 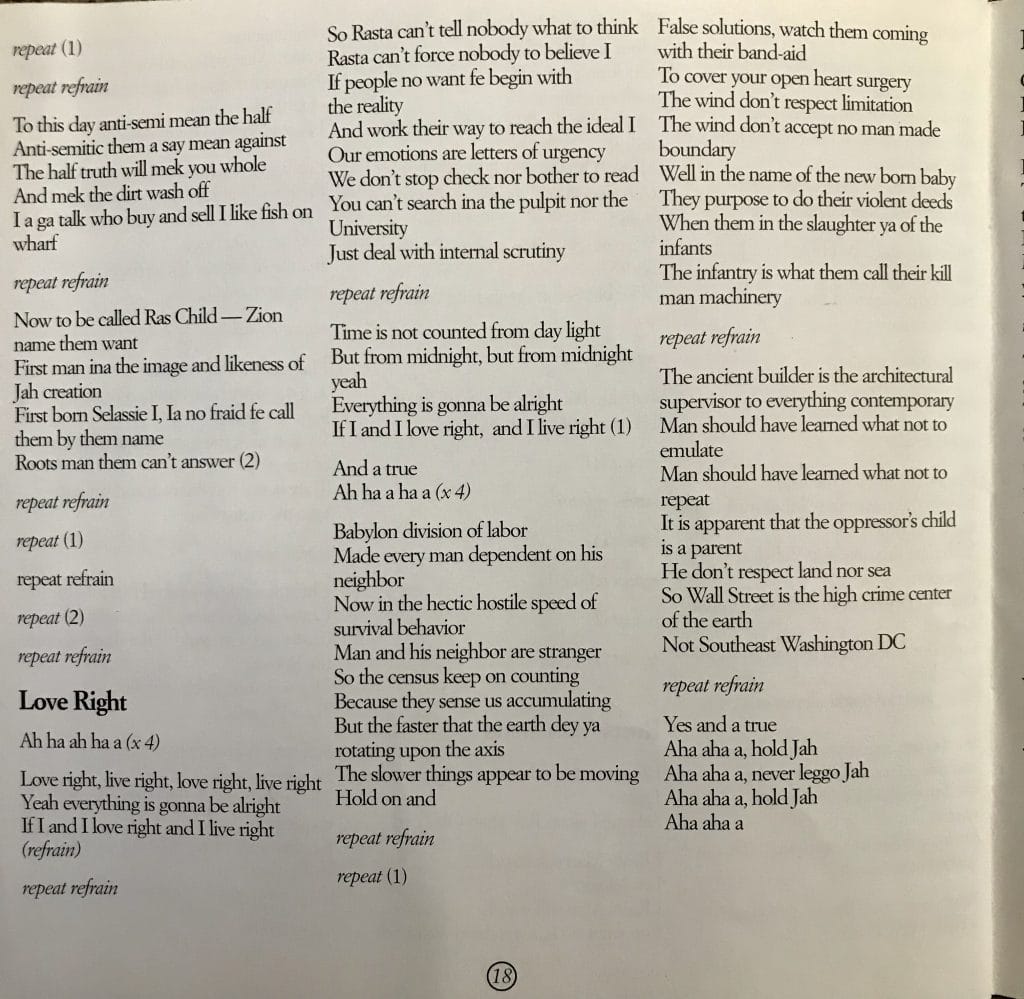 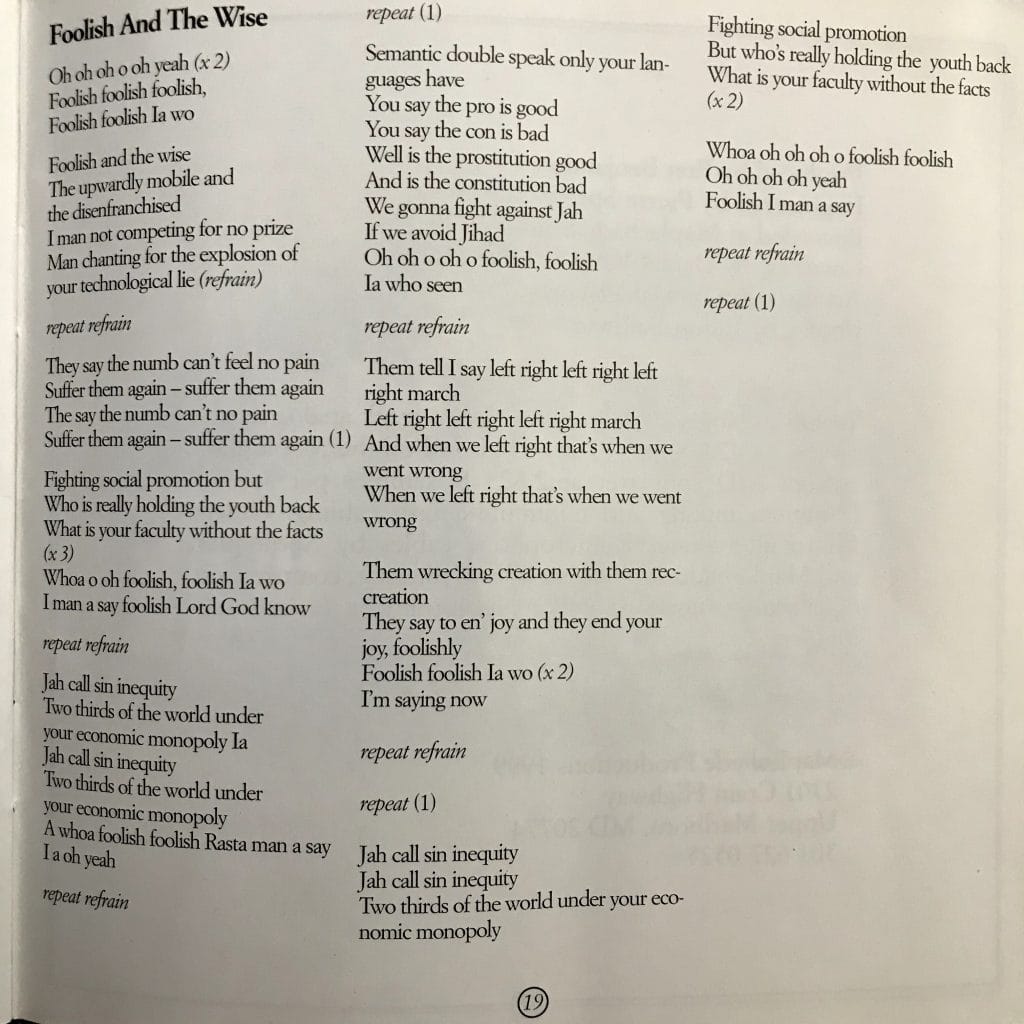 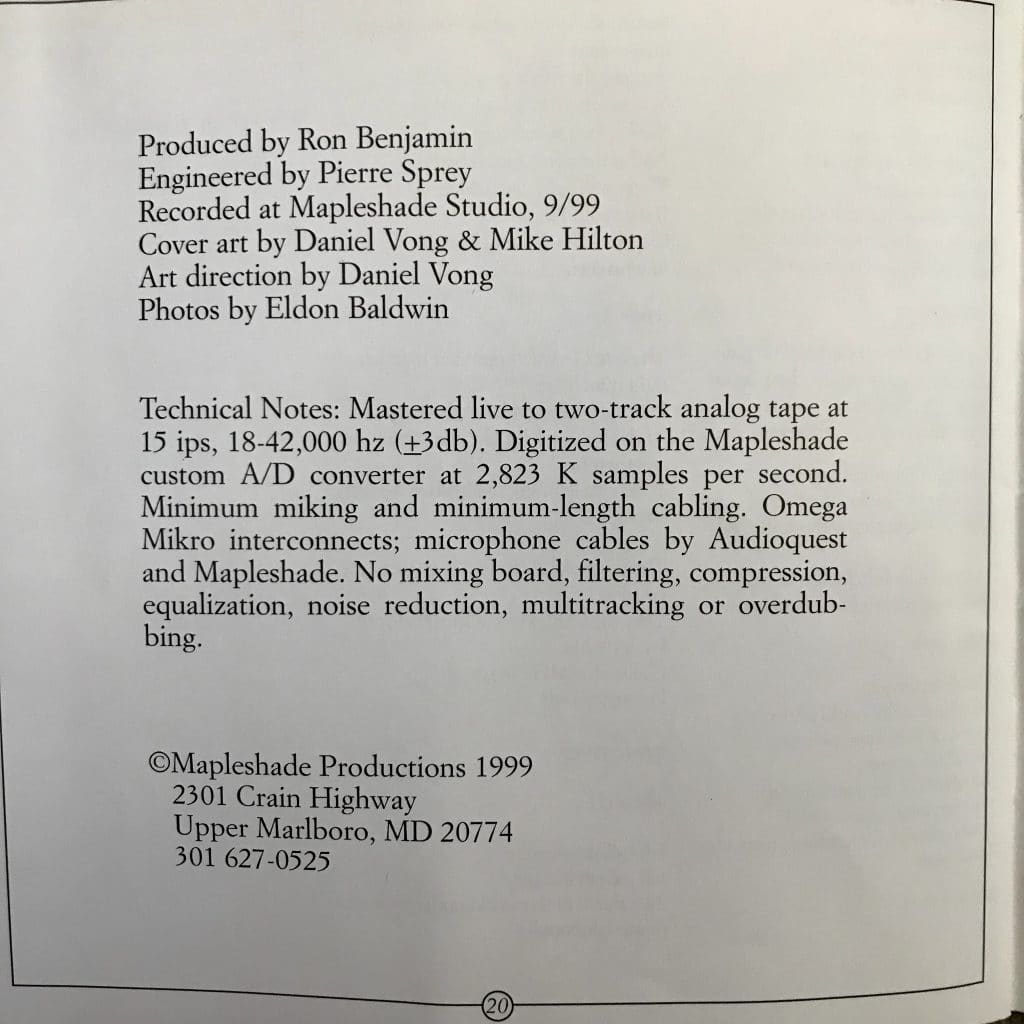 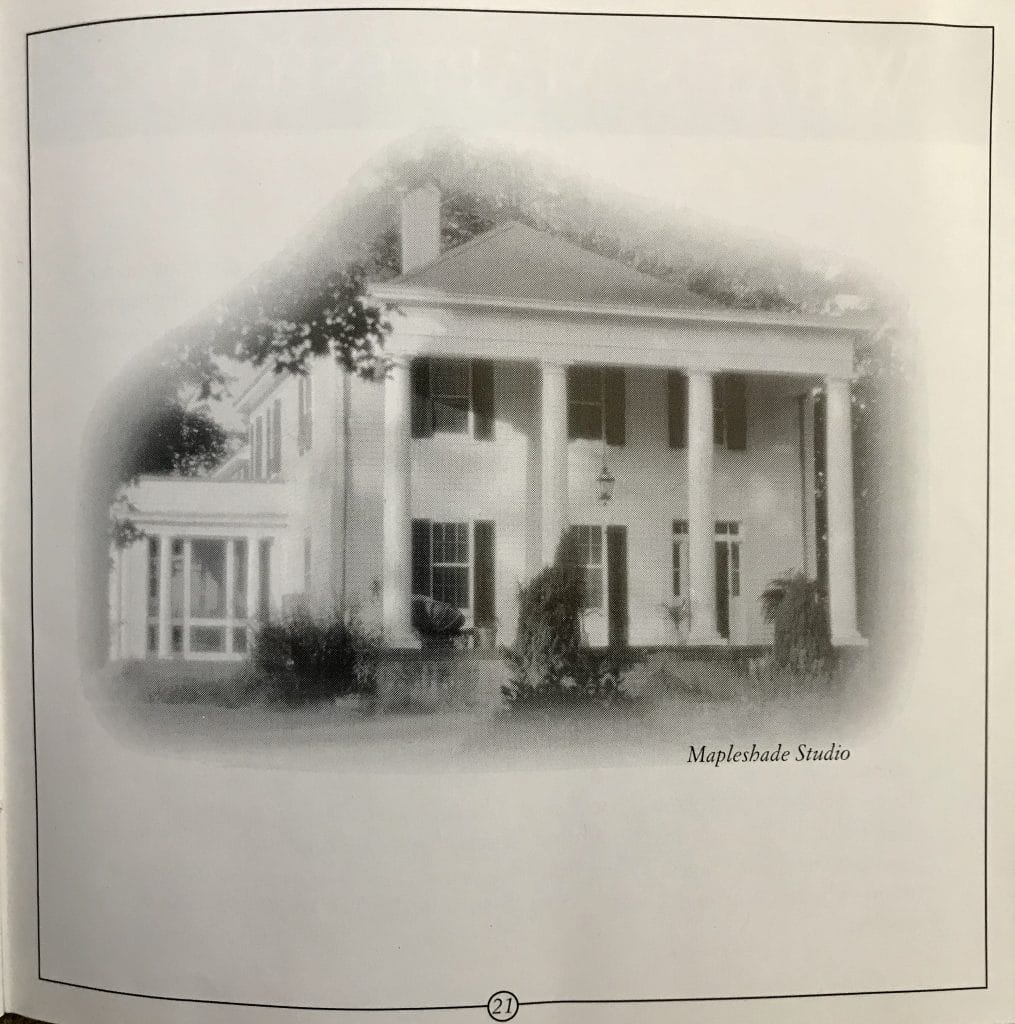 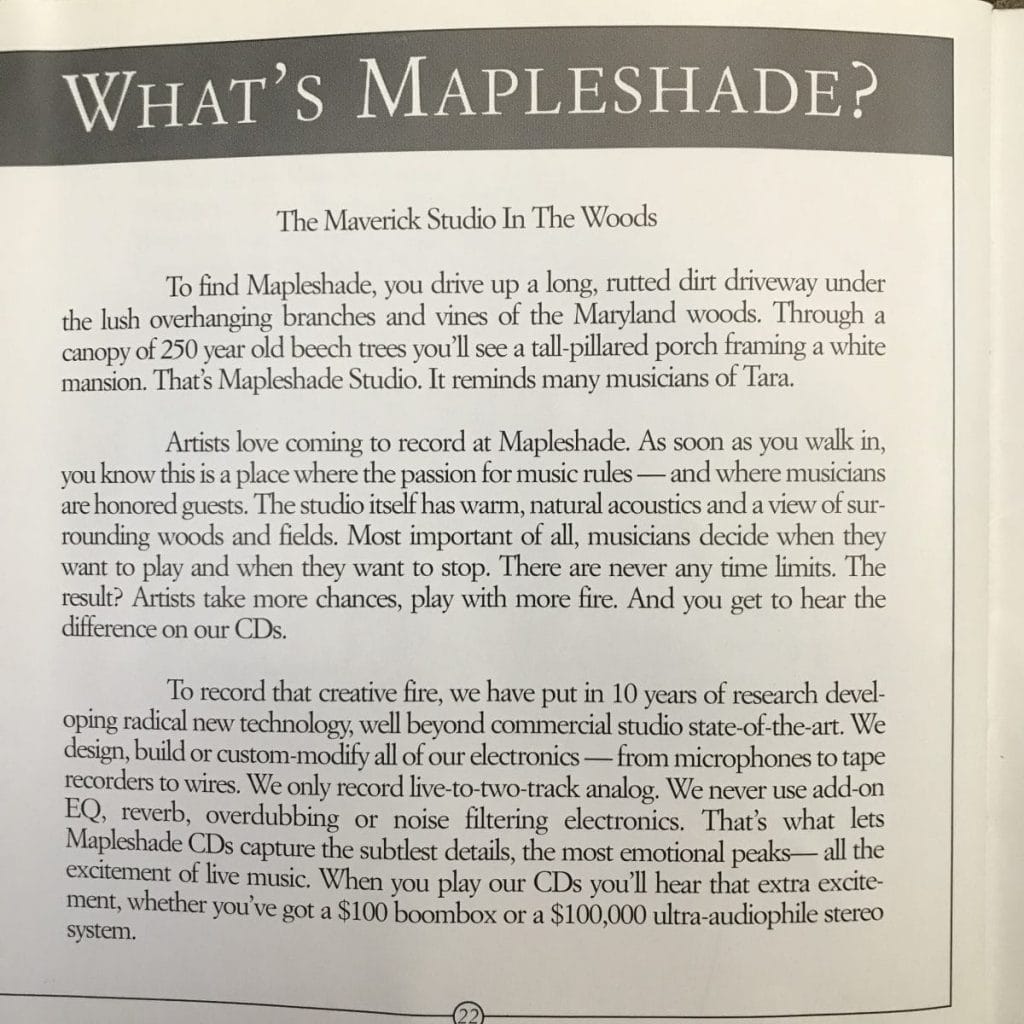