Throwback Thursday: Dennis Brown – Deep Down and “The Flyers Style”

Honestly, I had been listening to reggae for too long before I truly discovered the greatness of Dennis Brown. Punk and ska led me to reggae early on; I think a lot of people can relate to that progression. In high school I was all about Augustus Pablo and Peter Tosh, and then the guys behind the scenes like King Tubby, Scientist and Lee Perry. I was so focused on dub that I was barely thinking about the singers.

When I heard Dennis Brown’s “Sitting and Watching,” I knew I had to dig deeper. His incredibly strong voice stood out from a lot of other reggae singers I had heard. He had a powerful resonance and impressive control of that vibrato.

Dennis Brown grew up right in the heart of Kingston, JA’s flourishing music scene. He couldn’t help but be inspired by all that was going on around him, with the booming dancehall culture and recording industry. By the age of 9 he was already singing with Byron Lee and the Dragonaires. He was so tiny they had him stand on a box to hoist him up so the audience could see him. He was only 12 years old when he recorded his first two albums, which he finished in 2 days: No Man Is An Island and If I Follow My Heart. He truly became a child star in Jamaica; Marley had named Brown as his favorite singer, and he was even dubbed the “Michael Jackson of reggae.”

When I started digging back into his history, I was amazed by the incredible amount of music he recorded in his career. He made almost 80 albums and had so many hits! Although it’s not one of his well known albums, something stood out when I heard Deep Down. I fell in love with it right away.

It always brings up a lot of memories from 2015 and 2016, right before I moved out to the West Coast with Dubbest; I was working hard and saving up for the biggest change yet in my life. For several years I could not stop listening to it, and it somehow never got old. Deep Down is an exciting album for me, where every single song hits equally hard—nothing falls flat. It would be hard to pick a favorite. One day I’d pick “You’re No Good,” and another day maybe “Go Now” or “Shame.” But there truly isn’t a bad song on the whole album for me.

The sepia photograph of him smiling on the cover shows you how young he was at the time. Released as an LP on Winston “Niney” Holness‘ Observer label, Deep Down came out in 1976, but was actually recorded from 1974 to 1975, which means that Dennis was 18 years old or younger at the time of these recordings. That’s hard to believe when you hear how developed and strong his voice sounds.

This album comes from one of my favorite eras of music, the mid 70s, when reggae was still fairly new. There was still so much uncharted territory and innovation left to be uncovered in the genre. Toots and the Maytals are often credited with the name “reggae” after their song from 1968, “Do The Reggay.” The style still wasn’t exactly nailed down yet here in 1975, so there’s a crucial element of experimentation and improvisation on Deep Down. It’s very dense musically, with many melodic ideas overlapping at times, very tastefully. It’s a thicker sound than reggae from even a few years later. Deep Down still has some of the residual driving energy of ska and rocksteady.

Soul Syndicate is the backing band here; they were producer Niney’s go-to band at the time. Soul Syndicate consists mainly of George “Fully” Fullwood on bass along with Tony Chin on guitar, Earl “Chinna” Smith on lead guitar and the drumming of Carlton “Santa” Davis. They were the originators of so many of today’s reggae standards and styles. I’m lucky enough to have seen, spoken with and even made music with these legends at their residency near Los Angeles.

Tony Chin told me directly that Soul Syndicate played on most of the songs that Dennis did for Niney on the Observer label as well as some of the songs for Joe Gibbs, like “Money In My Pocket,” which became one of Brown’s biggest hits. But Tony himself wasn’t sure about Deep Down. Bassist Fully Fullwood was the one who confirmed for me that Soul Syndicate was in fact the backing band on Deep Down. It’s surprisingly difficult to find information on this classic album. But there were several keyboardist involved including Ansel Collins and Ossie Hibbert, as well as Alexander “Bottle Head” Portious playing a broken bottle.

As far as those involved in the production, engineering and mixing, it’s pretty hard to know exactly who did what. However, a lot of important people in reggae had their hands in the process, starting with Winston Holness AKA Niney The Observer, who got his nickname “Niney” from his missing thumb. He had a long and fruitful musical relationship with Dennis Brown that brought on a lot of great music and many hits. Others included Errol Thompson, Phillip Smart and more. Some of the tracks were even done in London with a different producer, Syd Bucknor, just to prove that England also had “the sound.”

Some of the strength of this album comes not only from Dennis’ voice and the sheer power of Soul Syndicate’s rhythms, but also from the production and structure of it. Niney has revealed that, particularly with Dennis Brown, they would make singles, not albums. Each song stands alone, with no fillers. It’s more like a compilation of their best work from this era. They also didn’t start the writing process with the vocals or the chorus. First, Niney would call in Soul Syndicate and they’d build and record solid instrumental tracks before considering the vocals. Then singers would write songs based on those ideas.

A lot of these tunes are driven by one of my favorite drum styles, “flyers” or “flying cymbals.” The drummer, Santa in this case, opens and closes the hi-hats repeatedly, creating this hypnotic hissing groove. Flyers was made popular in reggae with Johnny Clarke’s “None Shall Escape The Judgement,” which also features Soul Syndicate, around the same time, also with Santa on drums. Earl Zero, who wrote “None Shall Escape The Judgement,” described the flyers style as, “Egyptian Reggae.” Every single song on Deep Down has at least a hint of this drum pattern, but it’s used directly in a bunch of songs including “So Long Rastafari,” “Voice Of My Father,” “Go Now,” and “Shame.”

Many people credit Soul Syndicate with the invention of the flyers style, but drummer Santa Davis himself has said otherwise. Although Tony Chin probably did create the longer guitar skank that matches right up with the drums, there are earlier examples of this flying hi-hat rhythm in ska and even disco before Soul Syndicate worked it so seamlessly into reggae. A disco example of this can be heard in the theme for the TV show Soul Train, the song “TSOP (The Sound of Philadelphia)” by MFSB. That style was called “Philly Bump,” and that tune is from 1973, just before Deep Down and “None Shall Escape This Judgement.” But it’s also possible that MFSB took it from Jamaican music, like 1968’s “Moonlight Lover” by Joya Landis, which has a very similar hi-hat rhythm. Wherever it originated from, it blew up in the mid 70s in Jamaica and is a crucial element of Deep Down.

The first track, a flyers version of the Rasta song, “So Long Rastafari,” starts with a great funky drum fill, an incredibly cool intro, and then slides right into the flying cymbal feel. Somehow, the bass being slightly out of tune on this track (and others) only makes it cooler. Dennis shows off his ability to rework songs with a more upbeat version of Ken Boothe’s “You’re No Good” and also “Shame,” which is an almost unrecognizable version of Shirley & Co’s “Shame Shame Shame.” Dennis’ doubled lead vocal in “Go Now” is such a centerpiece to the song. At times, both vocal tracks are lined up immaculately, and at other points the two vocals split and his improvised melodies overlap beautifully, as his phrasing differs between the two.

The lead guitar by Chinna puts the icing on the cake throughout Deep Down. There’s almost shredding rock guitar on “Voice Of My Father,” which really stands out for me, emphasized by the haunting lyrics and powerful bass improvisations. And the slippery lead guitar in “Traveling Man” calls to the responding horn line beautifully, then keeps sliding through the verse while the horns take the rhythm instead. Chinna’s ominous guitar twanging on “God Bless Our Souls” is one of my favorite parts of the album, as well as his slidey octave line in “Say Mama Say.”

I’ll never stop being impressed by Dennis Brown and Soul Syndicate. Vocally, Dennis Brown is my biggest musical influence, and I could pick apart many of his albums with the same enthusiasm. But the mystery of Deep Down sucked me in. It will always transport me to different times in my life, and invoke all sorts of memories, good and bad. I can’t get enough.

Ryan Thaxter grew up south of Boston, MA and met the guys from Dubbest in elementary school through high school. They played in several different bands together until officially forming Dubbest in 2009, touring the US soon there after. In 2016, Dubbest relocated to San Diego, California for the SoCal music scene and weather. Nowadays, the touring continues and the band is excited to be releasing a new album in early 2019. 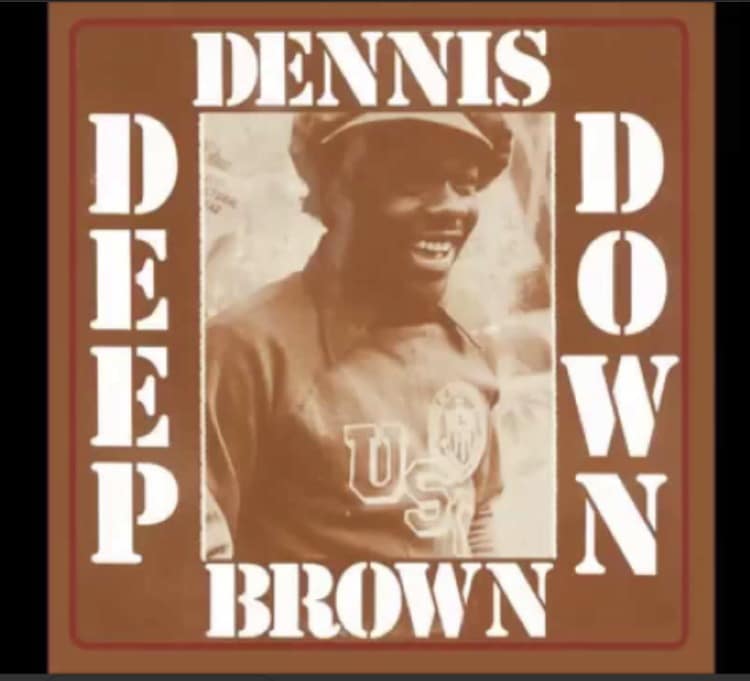