Rootfire At The Park 2017: The Official Recap

Rootfire At The Park returned to beautiful Cocoa, FL earlier this month, bringing together reggae & roots music fans for a truly one-of-a-kind celebration. Overcast skies and the looming threat of Florida showers did nothing to deter the faithful from turning out in full force for the second annual event, which spanned three vibe-filled days at Cocoa’s Riverfront Park. Emphasizing Rootfire’s dedication to giving back, all proceeds from this year’s event went toward Hurricane Irma relief in Cocoa.

Here at Rootfire, we love nothing more than a weekend trip down to the Sunshine State, especially when there are some festivities to be had. Last weekend’s event delivered with an exceptional mix of talent, plus a boatload of purely man-made positive energy.

Thanks to the unrelenting efforts of Ineffable Live, Deuterman Productions, and the Rootfire team itself, festival goers got the best of incredible food from local vendors, a range of outdoors activities (Soccer Garden Party, hula hoop flow lessons, etc.), and nonstop music from every corner of the roots and reggae scene and beyond. Artists as time-honored as Stephen Marley crossed paths with up-and-coming indie bands like The Hip Abduction, folk heroes like Citizen Cope, and legendary live acts like Michael Franti & Spearhead. Rootfire At The Park also looks to be quickly becoming one of Florida’s essential festival experiences for breakout local talent. Groups like Spred the Dub, Kash’d Out, and the Ries Brothers made a strong showing for their home state.

In case you missed it, here are some of the sights and sounds of Rootfire At The Park 2017. It probably goes without saying, but we already can’t wait for next year. 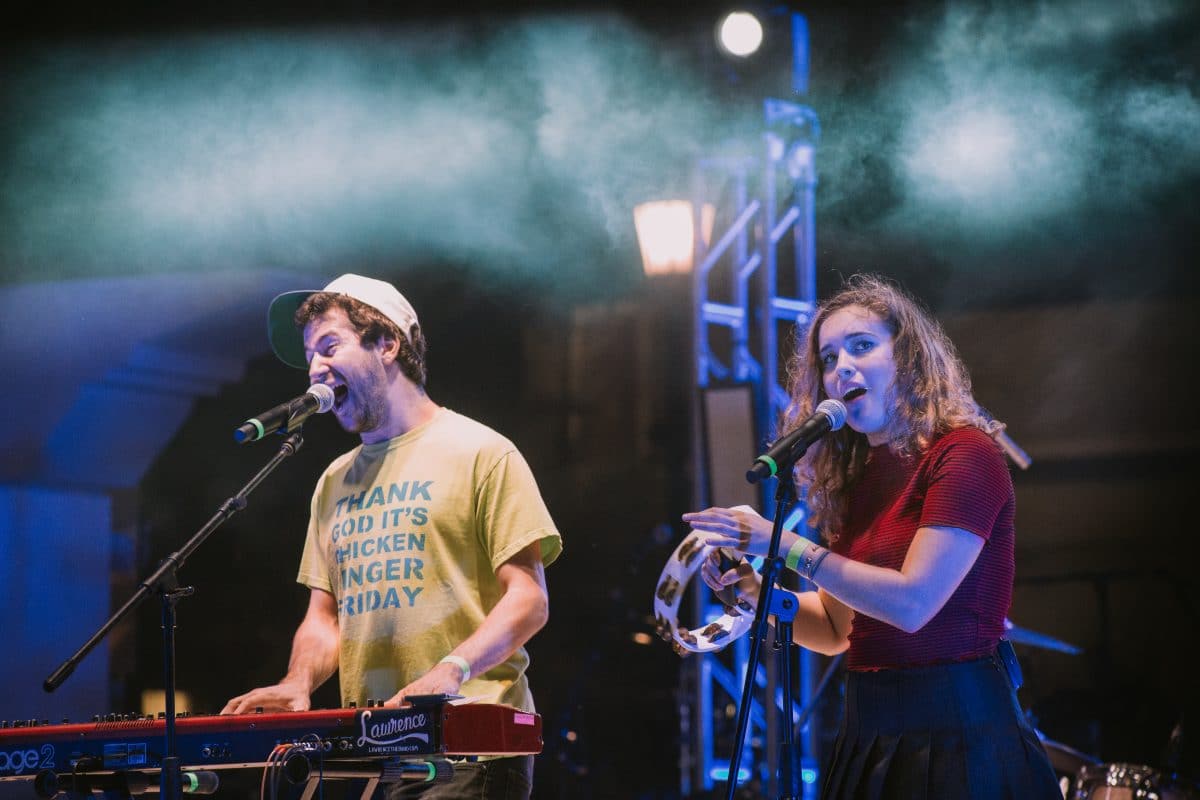 If you thought we were going to ease into this recap nice and slow, you’ve got another thing comin’. New York-based pop/soul band Lawrence did not go gentle into the Friday evening sunset, kicking things off high volume, shredding on keyboards, and delivering some astounding vocals. 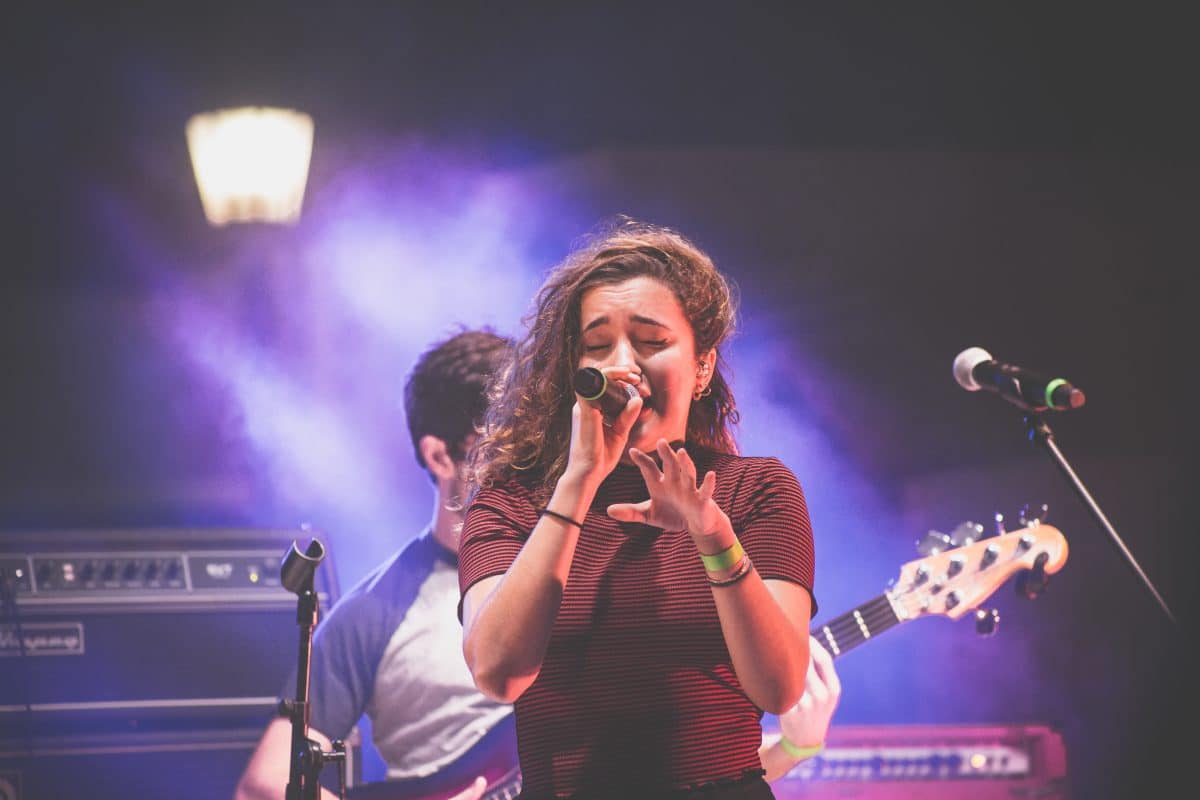 Gracie Lawrence showing off some serious vocal range. If you haven’t already, go check out Rootfire’s interview with the band, or maybe just blast their music as loud as possible and dance around your living room. 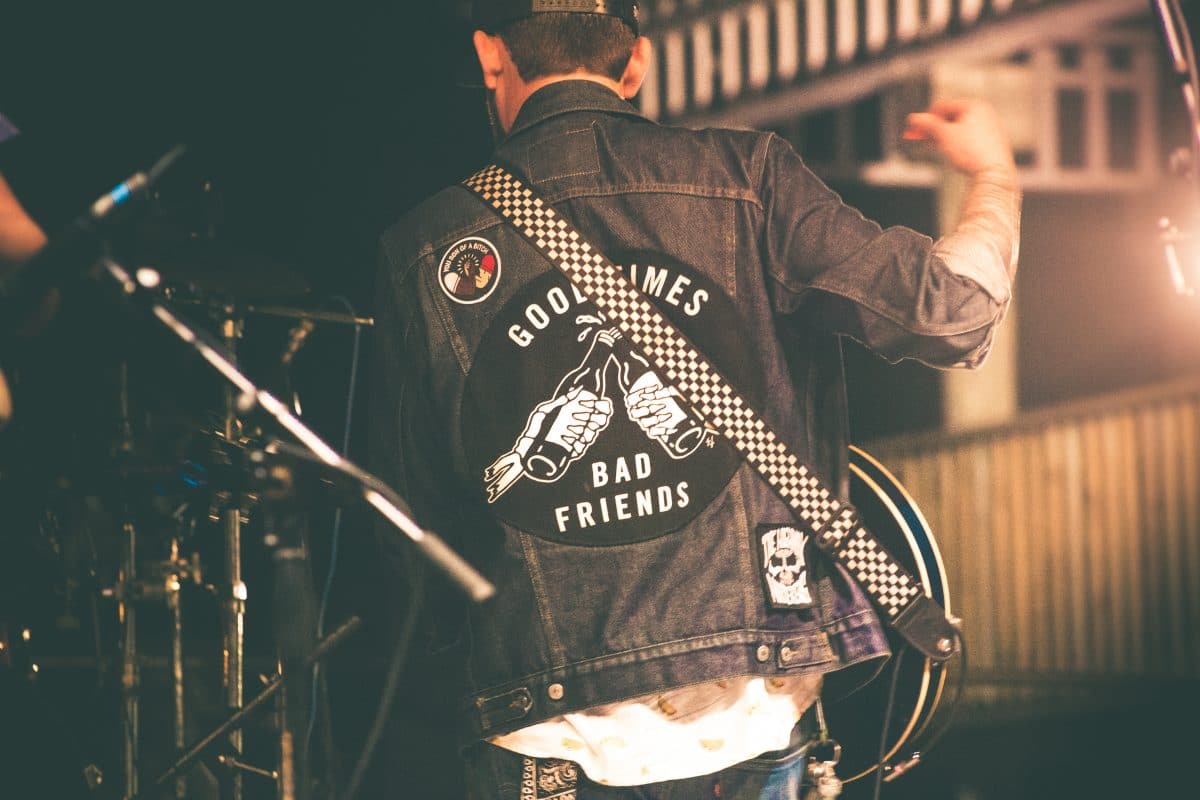 Spred The Dub‘s Mick Swigert rocking one of the flyest denim jackets we’ve seen in a while. If you don’t have at least a couple patches on your jacket, are you really even in a band? 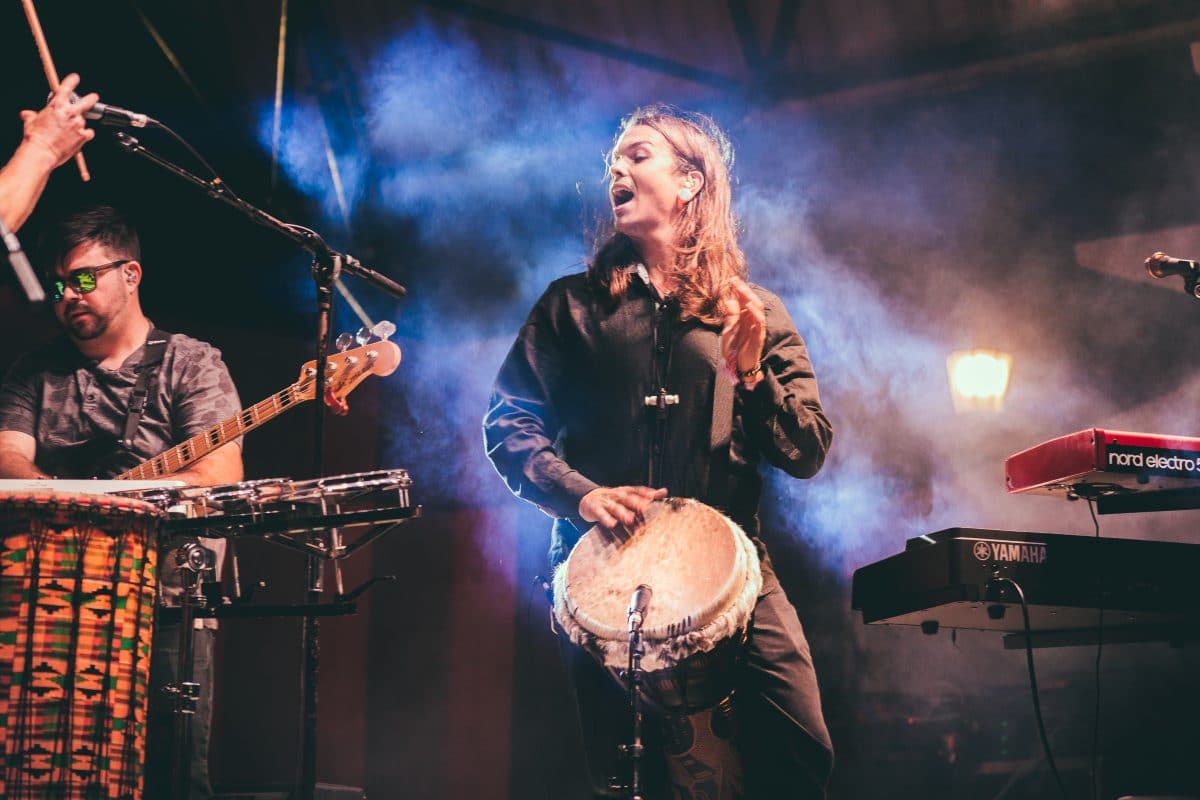 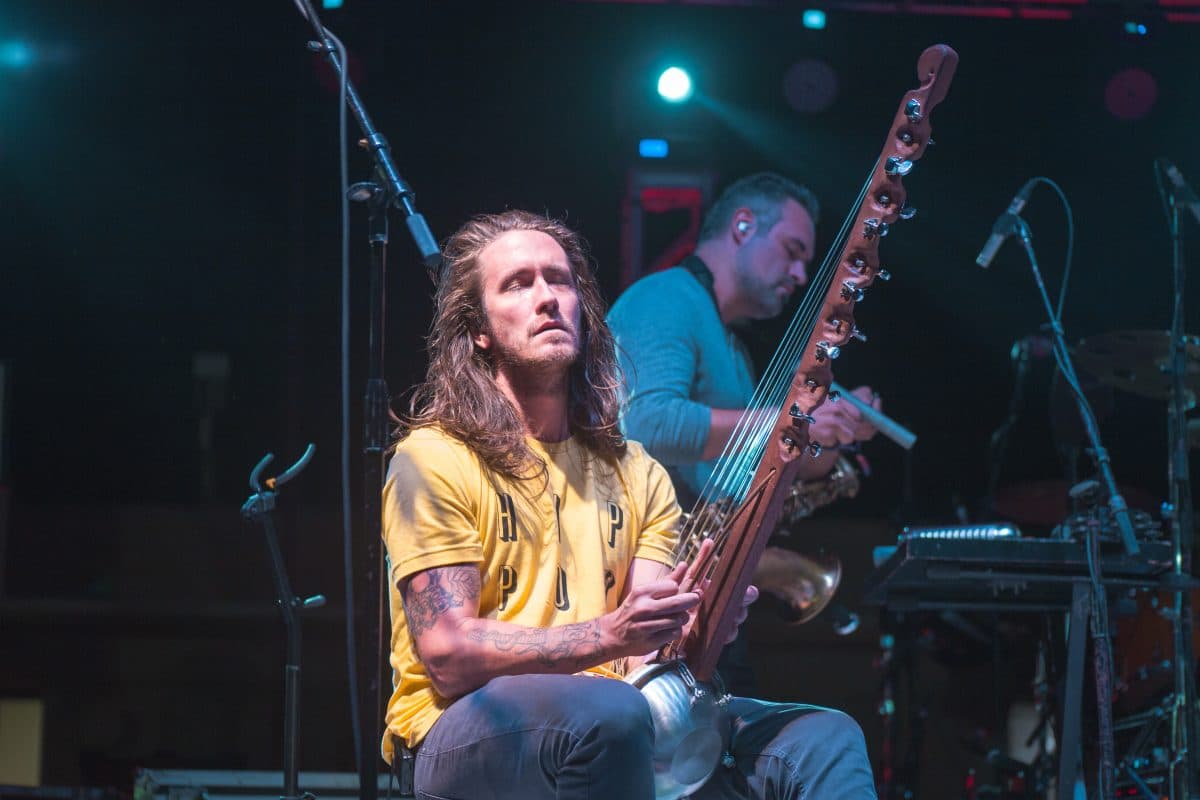 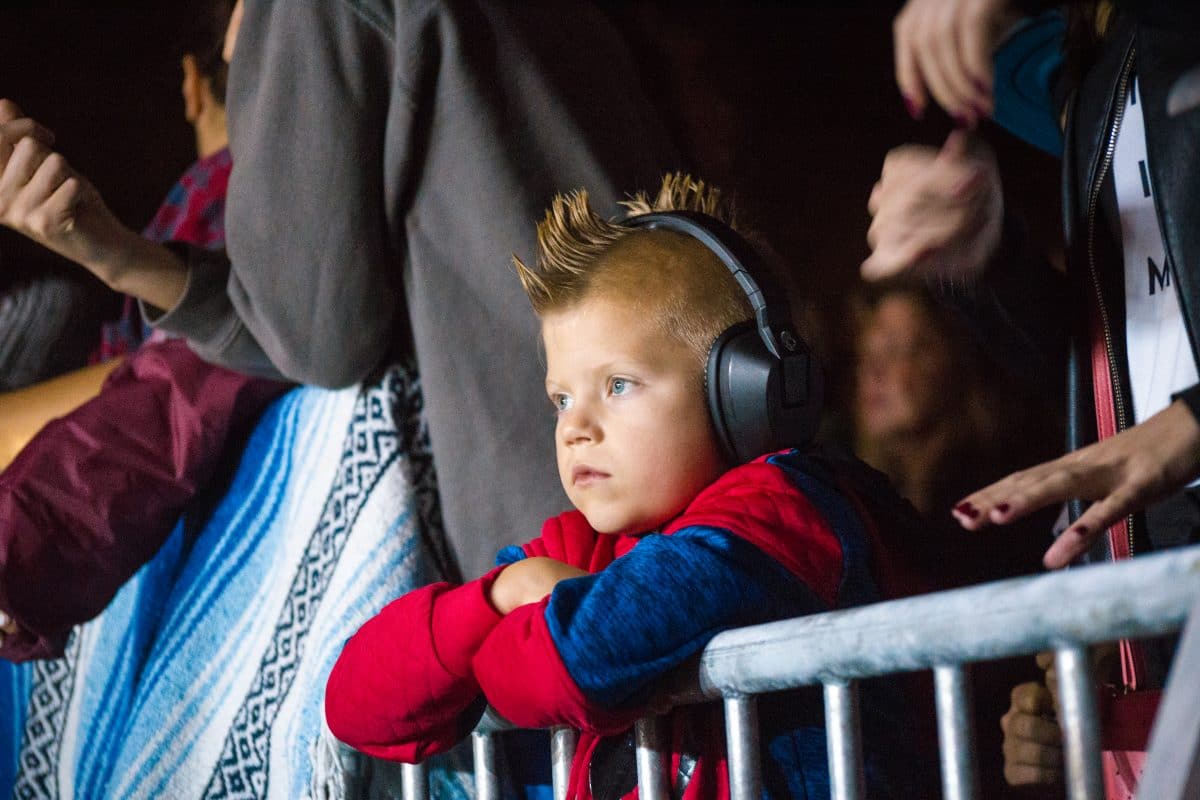 This fella was front row the whole set. Let’s give a collective round of applause to his mum for encouraging the yellow mohawk. 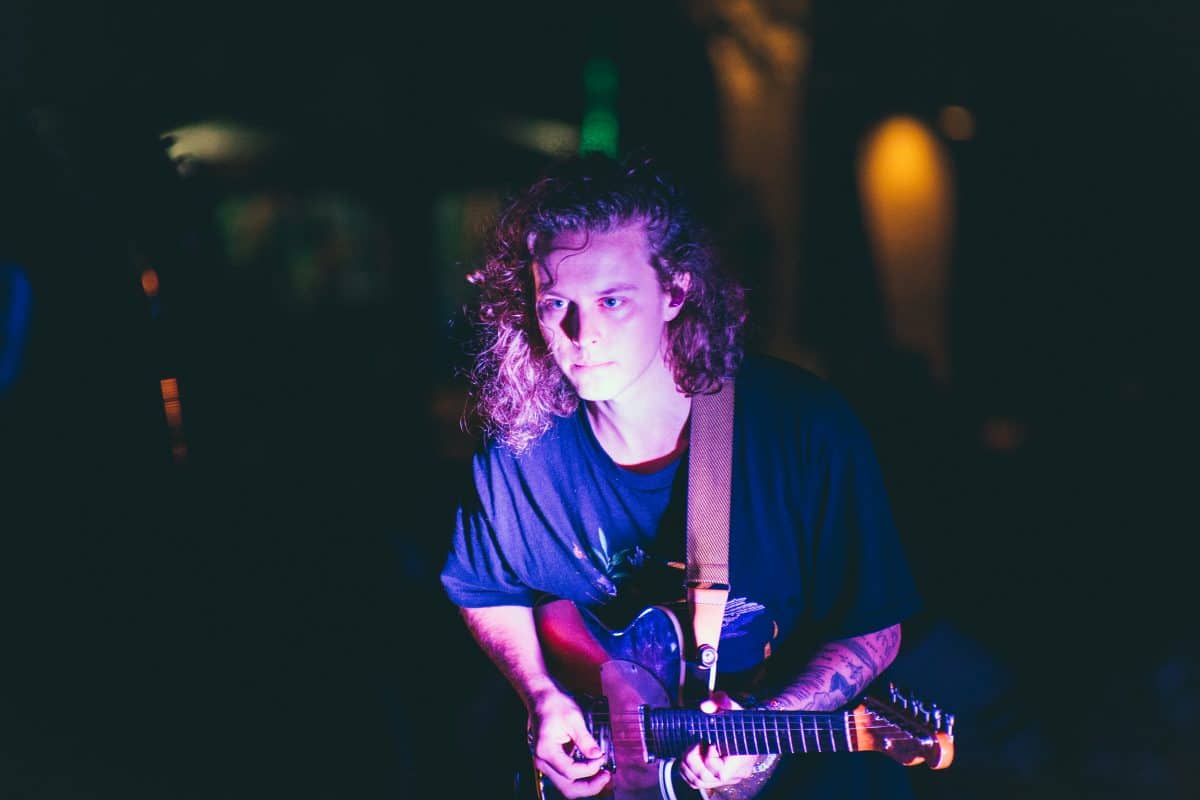 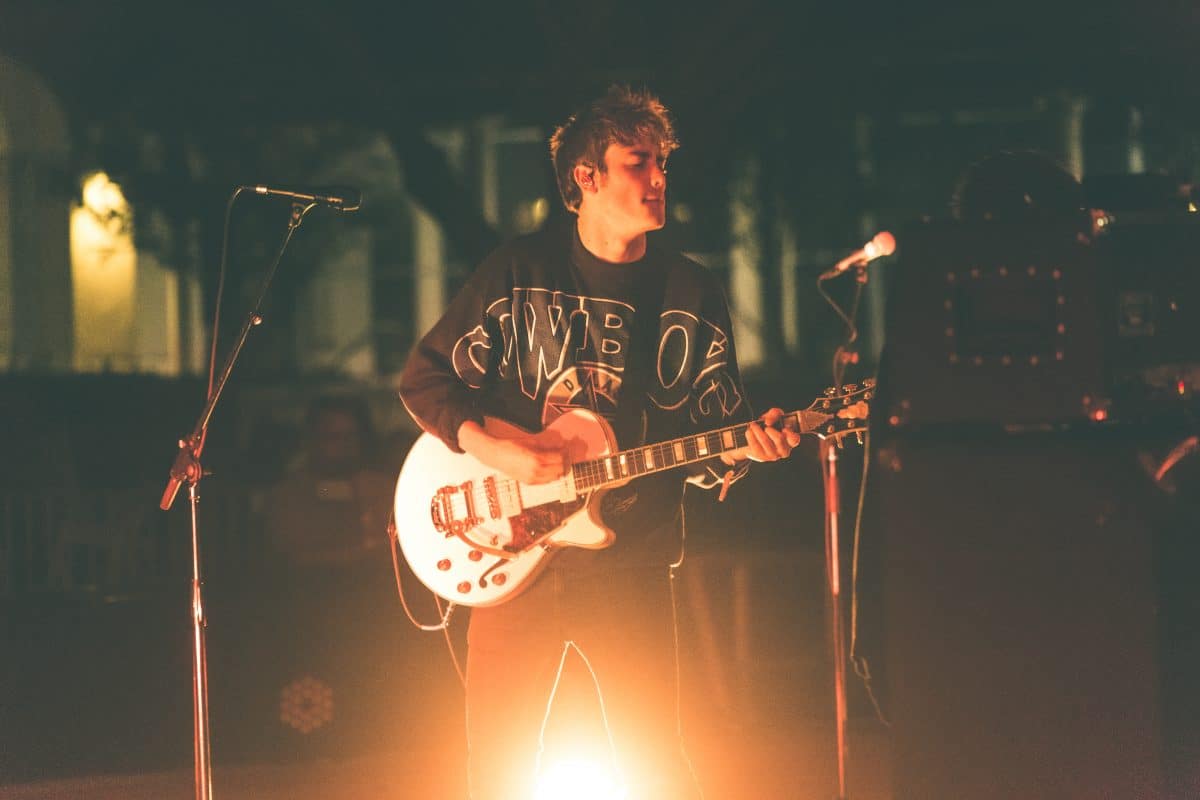 Nathan Stocker and Jake Luppen of Hippo Campus closed down the main stage with a transformative set. After hearing this group glide through some of the smoothest sounding indie rock jams of the whole weekend – some happy amalgamation of Alex Turner of the Arctic Monkeys, Ezra Koenig of Vampire Weekend, and Mac DeMarco – it’s no wonder their rabid fanbase turned up in droves Friday night. 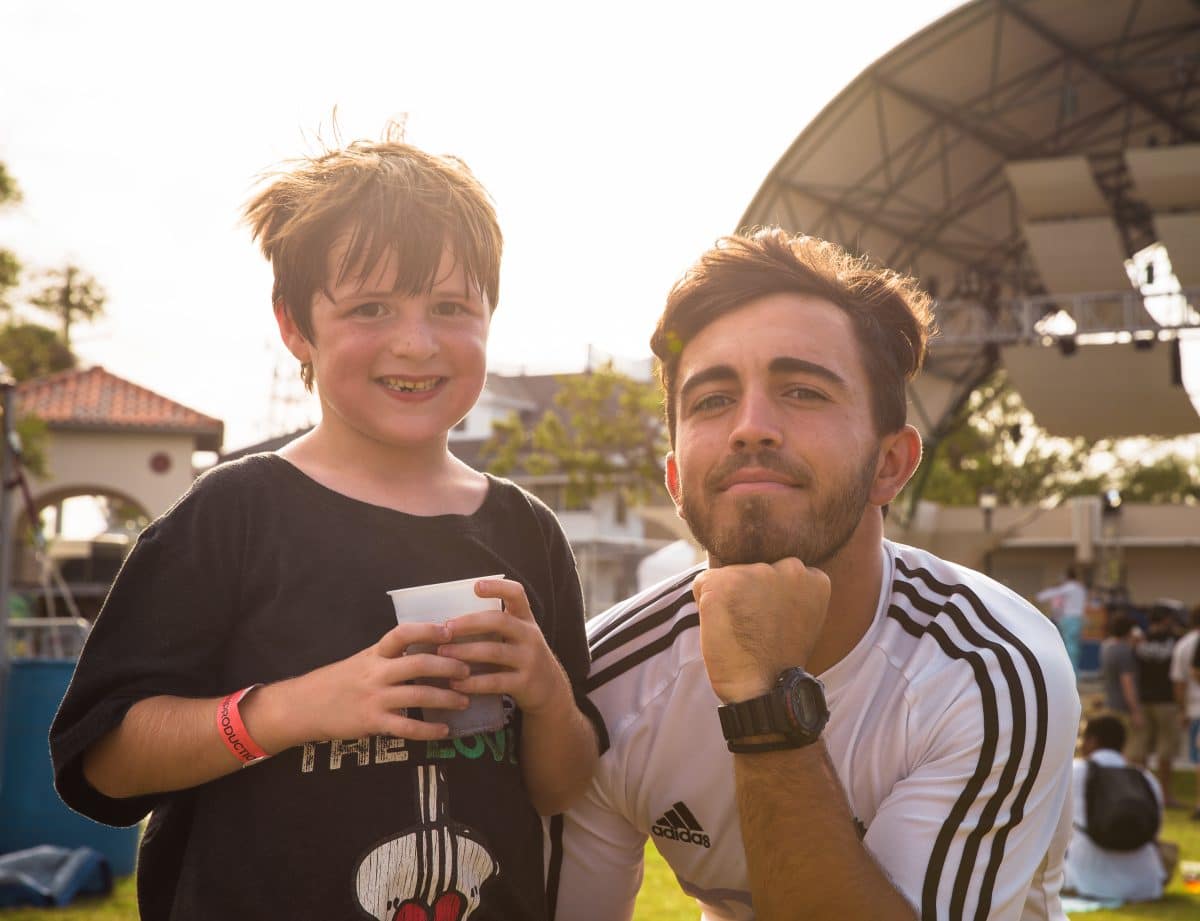 Rootfire At The Park really wouldn’t have been complete without the Soccer Garden Party in its midst. Rumor has it Julien Melendez (in the [fuego] white Adidas x Rootfire collab jersey) will be featured in an upcoming Sugarshack Sessions interview. 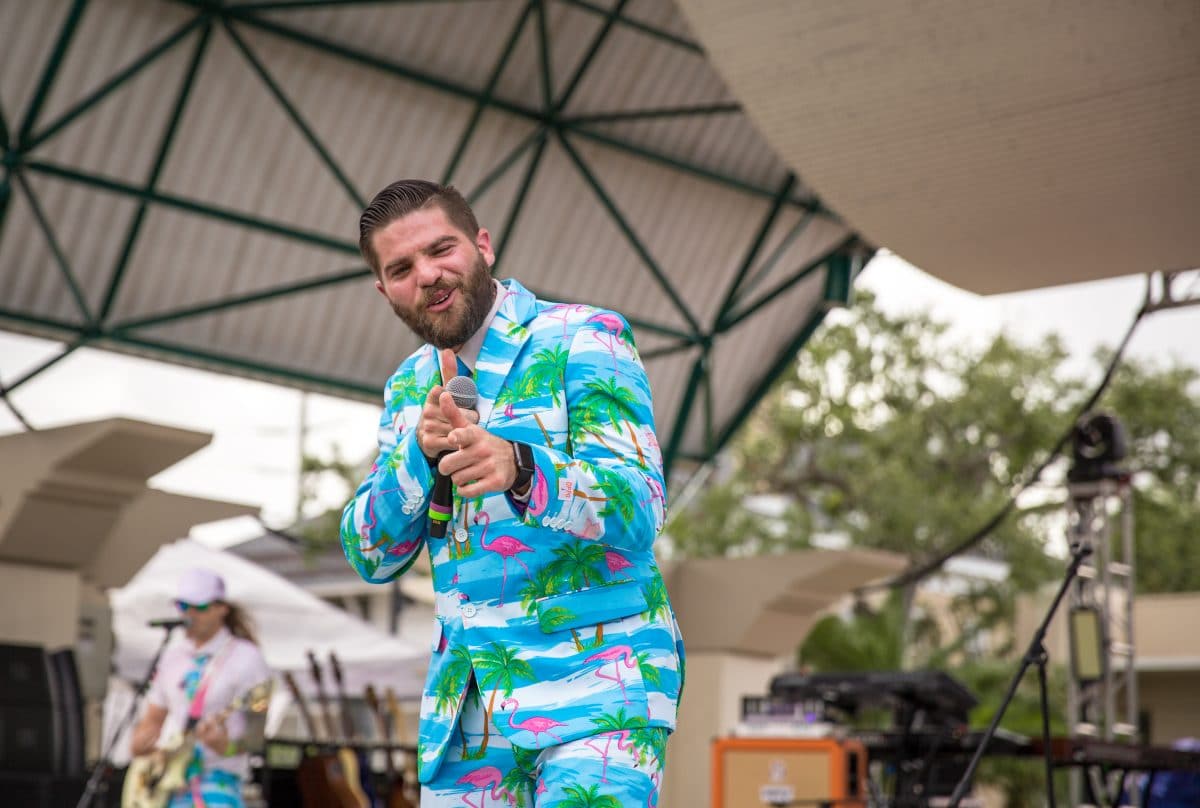 If there were some kind of record for the number of big, beaming smiles per thirty-minute set, Jacksonville’s Cloud9 Vibes holds it. These guys brought unbelievable energy, danced through their entire set, played a cover of “Uptown Funk,” had great hair, fired off a giant t-shirt cannon into the crowd, did front flips over the security barriers, and arrived onstage in matching, well . . . I’ll just let those suits speak for themselves. 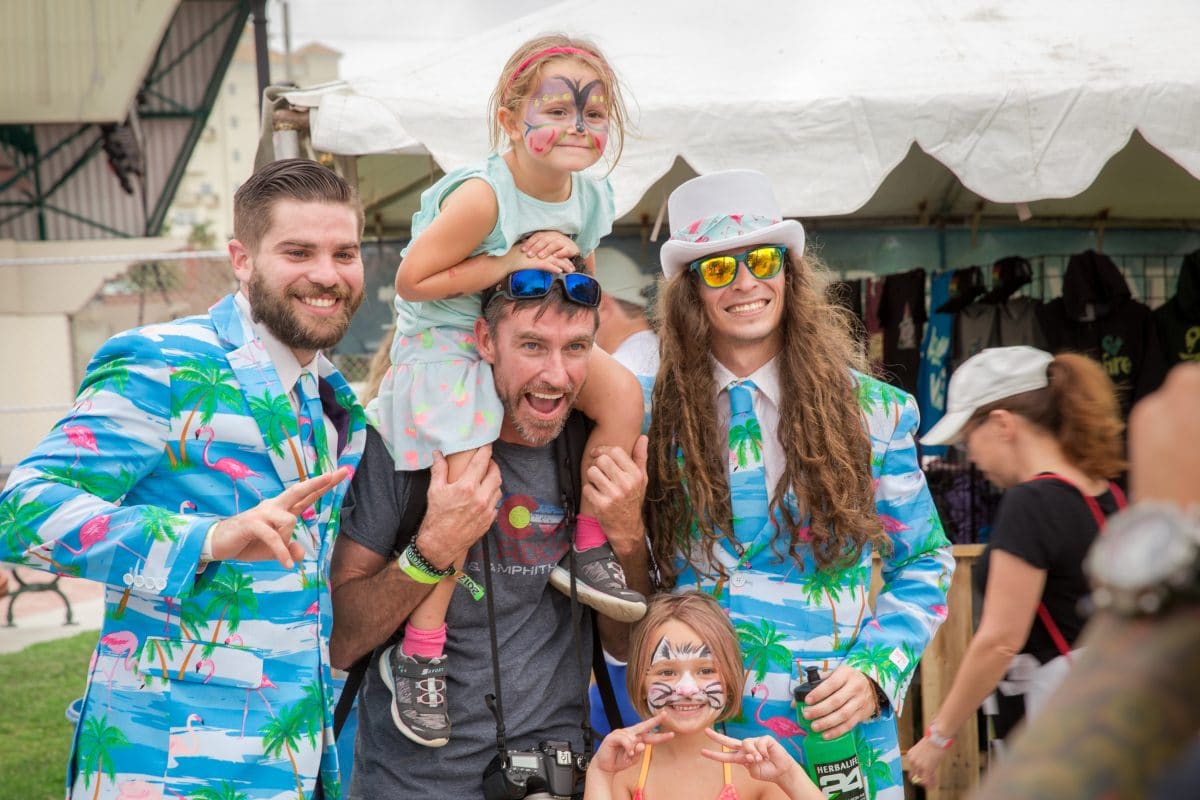 As far as I’m concerned, this photo embodies the spirit of the entire festival. The fellow in the middle, a professional photographer, brought his whole family to the park, and was there all three days just groovin’. Props to the Kids Tie Dye Workshop for their face painting wizardry. 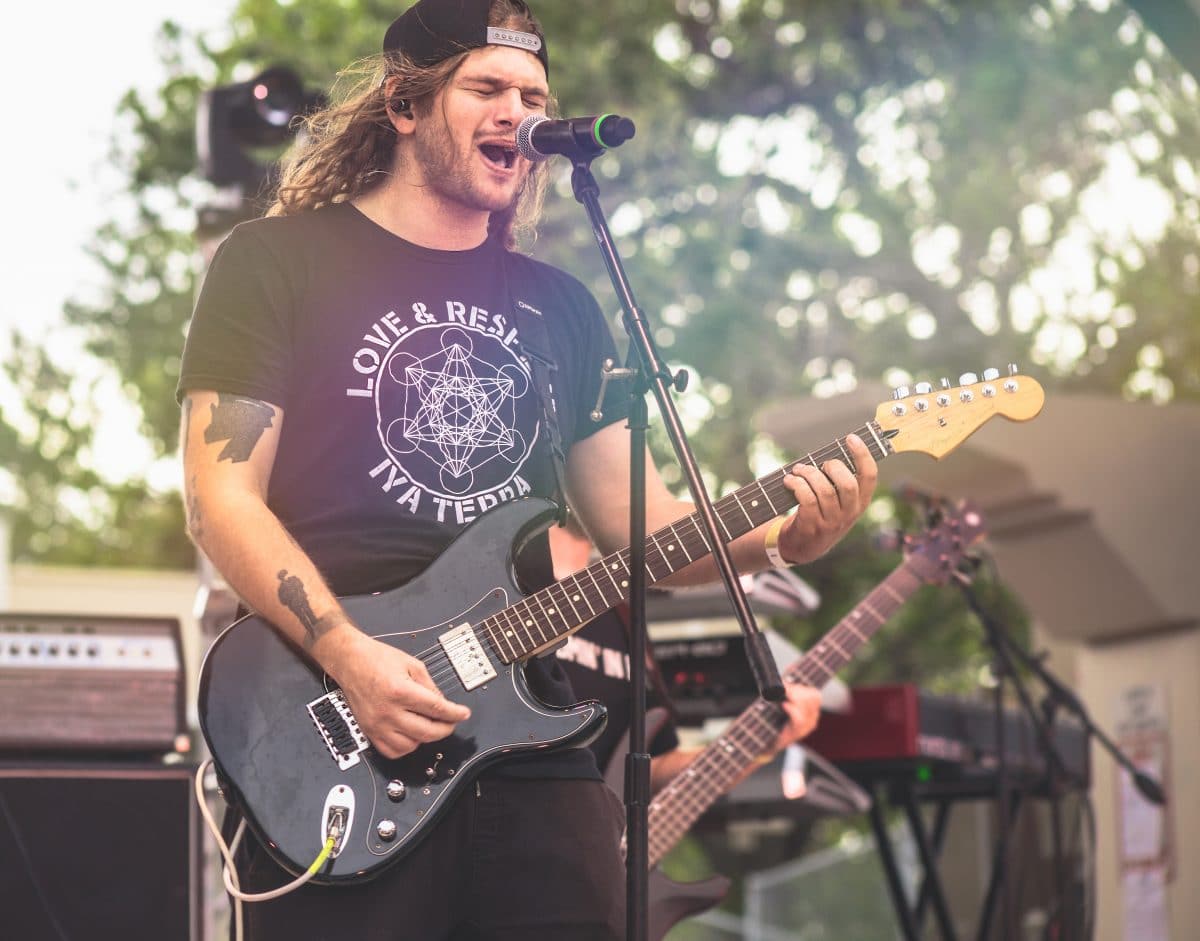 A fleeting Florida shower hit Orlando’s Kash’d Out briefly during their set mid-Saturday afternoon, but needless to say, that didn’t stop ’em. Plus, the silver lining? Rainbows. 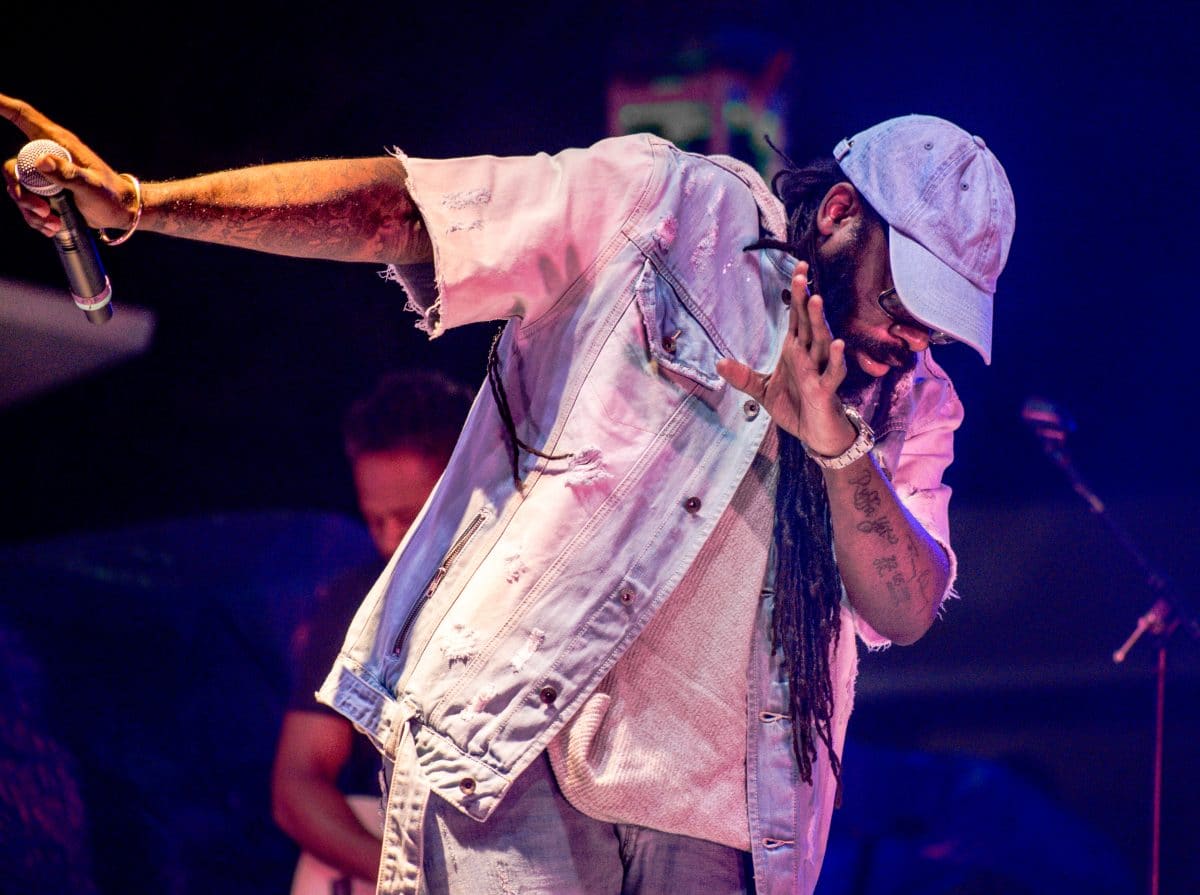 Tarrus Riley dabbin’ on ’em. Brings us back to memories of this phenomenal track with Major Lazer. 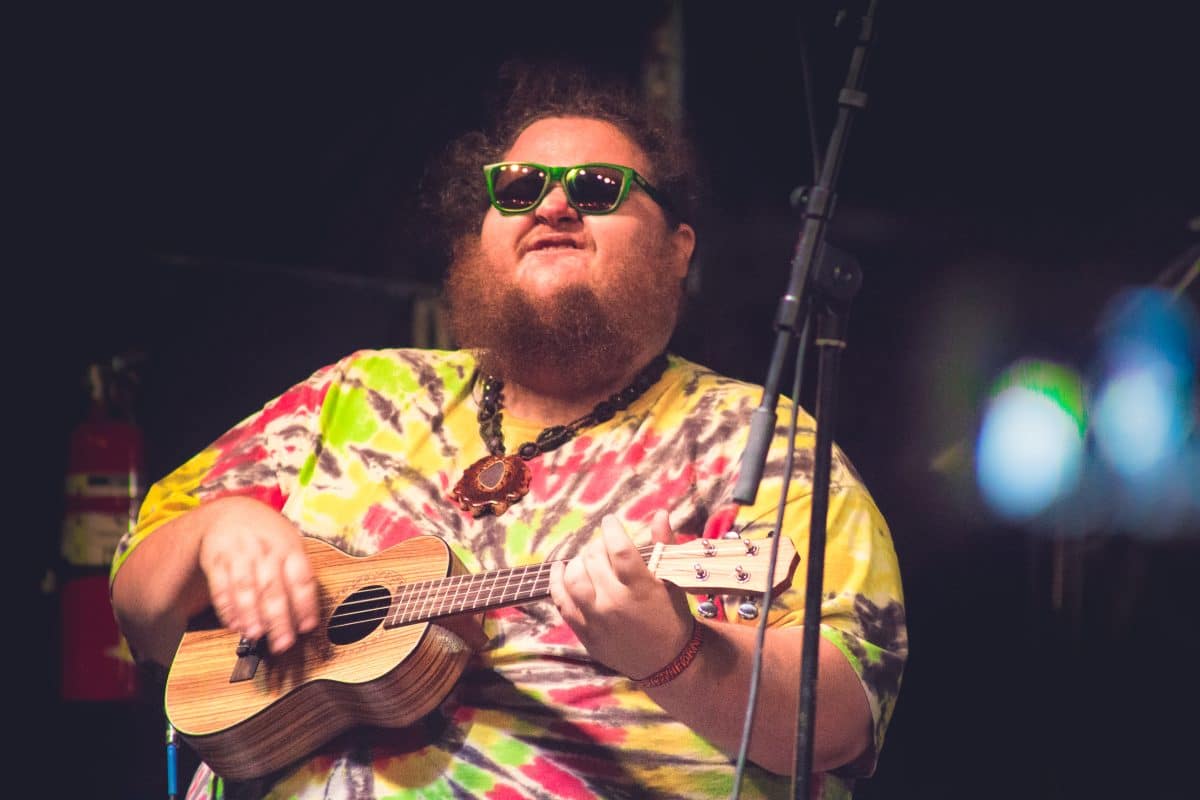 Meanwhile, on the Riverside Stage, TreeHouse! enlisted the considerable skills of the one and only Bubba Love. Take a look at the expression on this man’s face and tell me that isn’t pure ecstasy in shredding on ukulele. Further proof that TreeHouse! and Bubba Love are a match made in heaven. 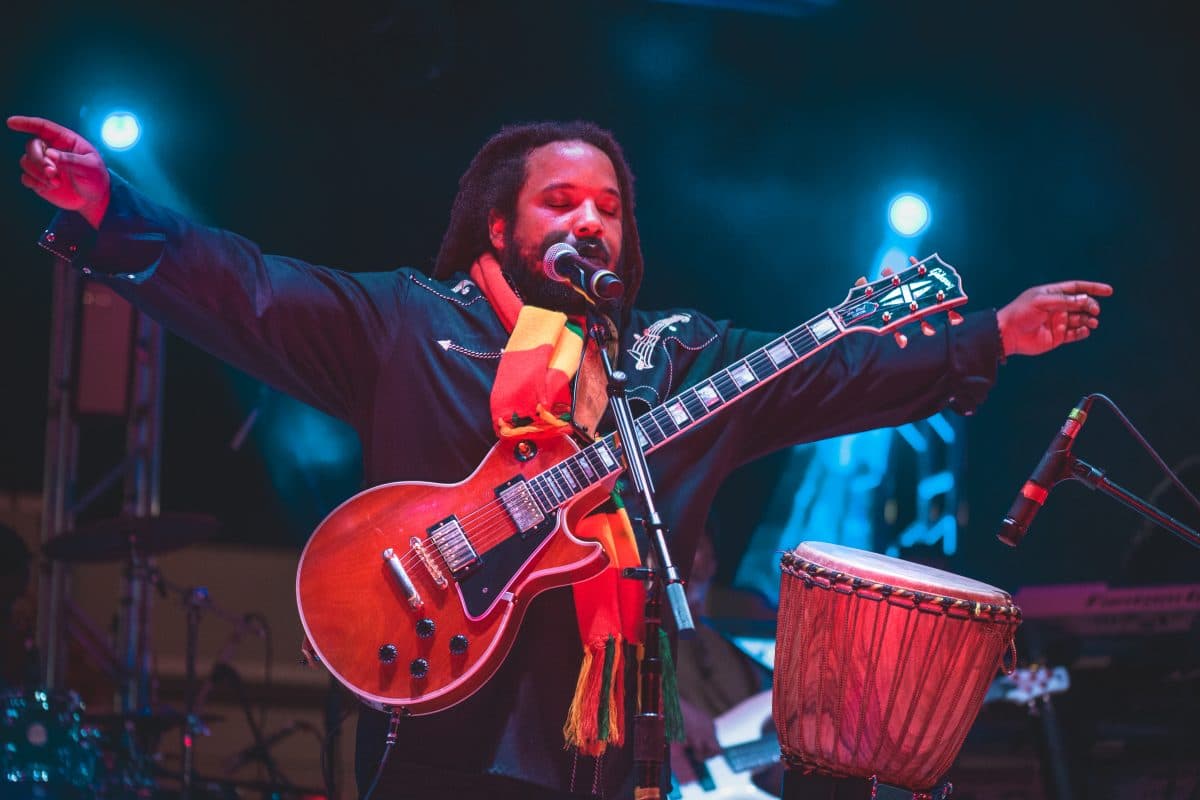 Stephen Marley, second son of Bob Marley, exuded serenity. Singing along to “Three Little Birds” from somewhere deep in a swaying, woozy crowd definitely ranks as one of the highlights of the entire festival. 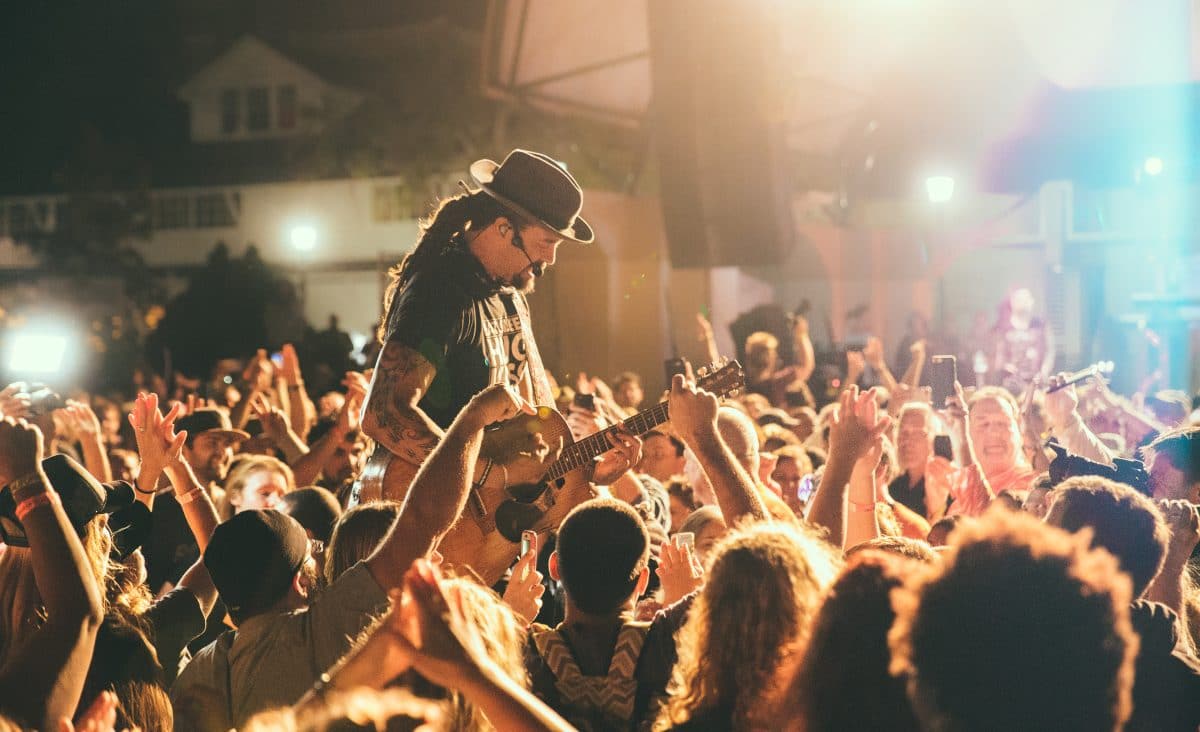 Michael Franti really took things out to the audience. Rootfire contributor and all-around good dude Dave Shiffman recently interviewed Mr. Franti about his charity Do It For The Love. 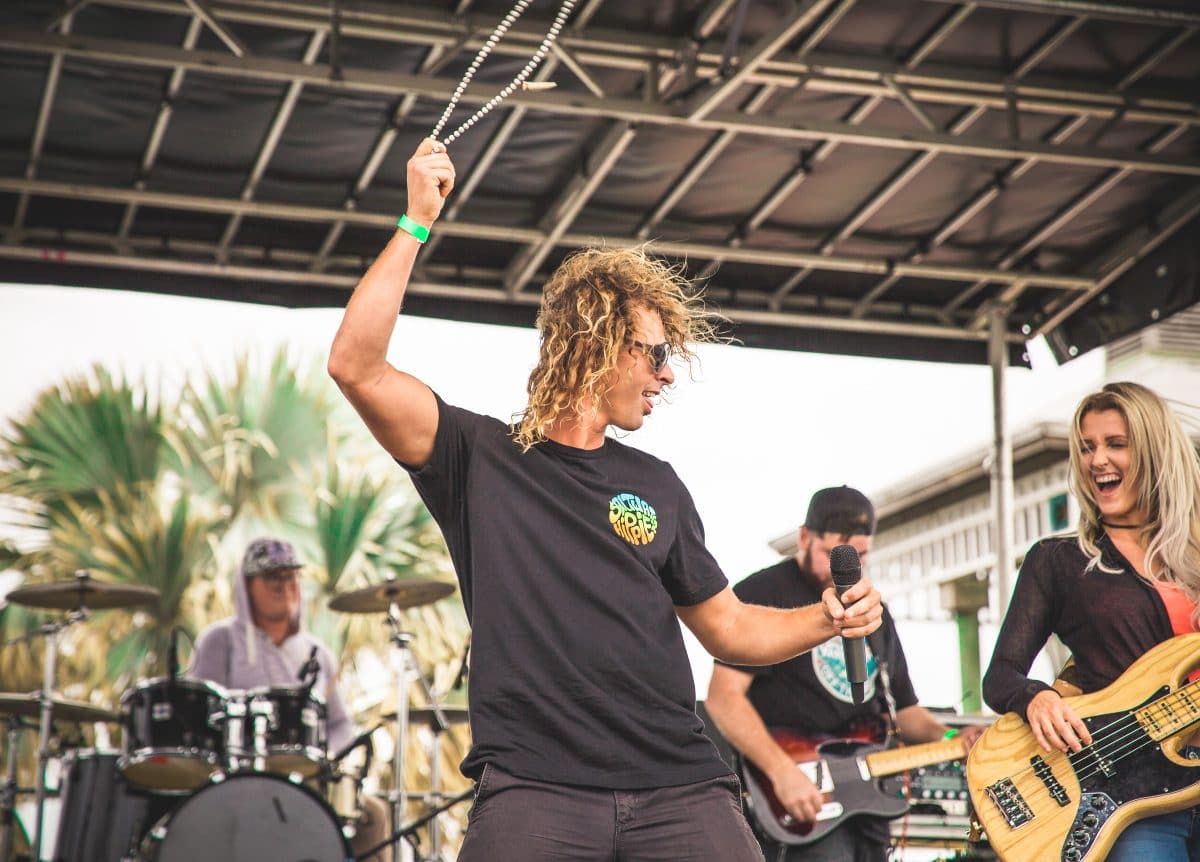 J. Carter of St. Pete’s Serenation lassoed the crowd with more than just a tribal shark-tooth necklace. Later during their Sunday afternoon set, he did a perfect back flip off the stage into the crowd. Huge. 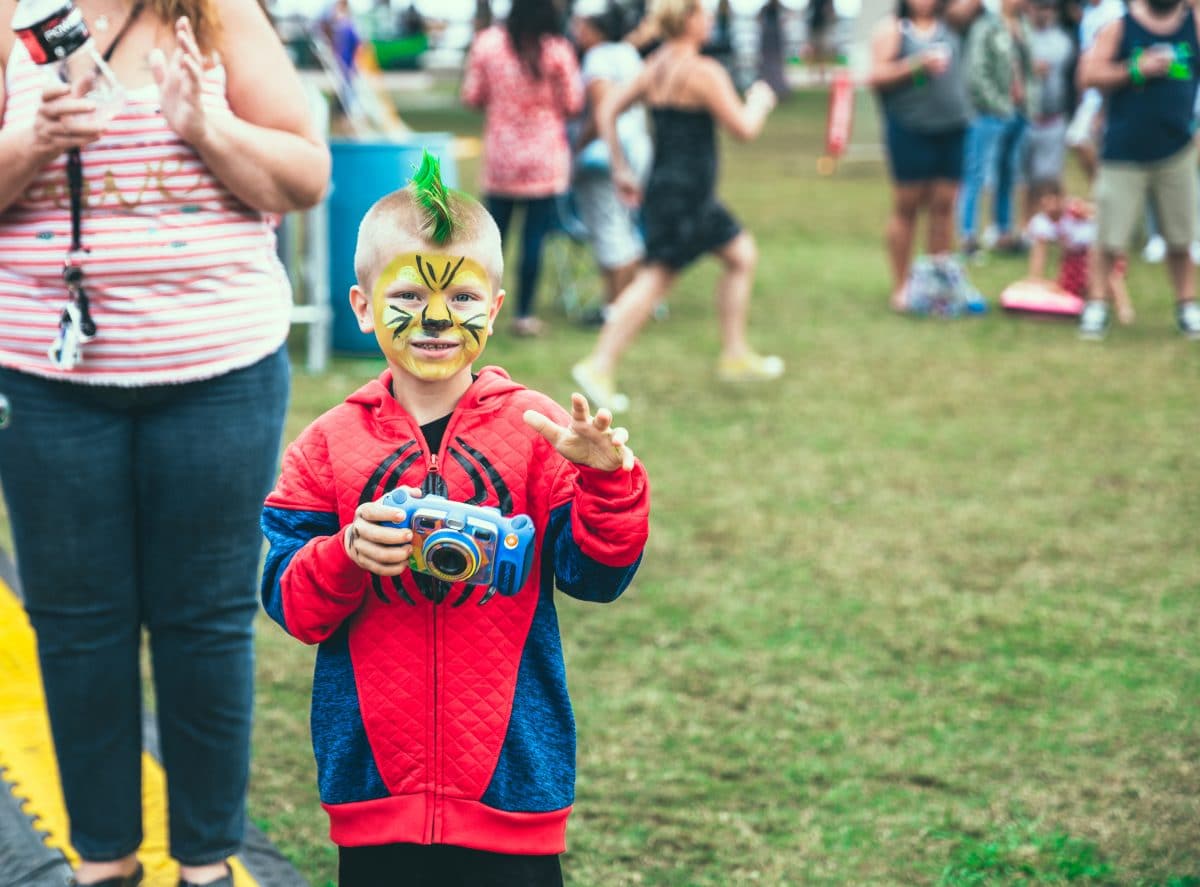 Looking around Riverfront Park, you’d honestly be hard pressed to find anyone with A) a nicer camera, B) better face-paint, or C) more punk-rock hair. Cheers, once again, to the parents for allowing that same kid to dye aforementioned mohawk bright green. 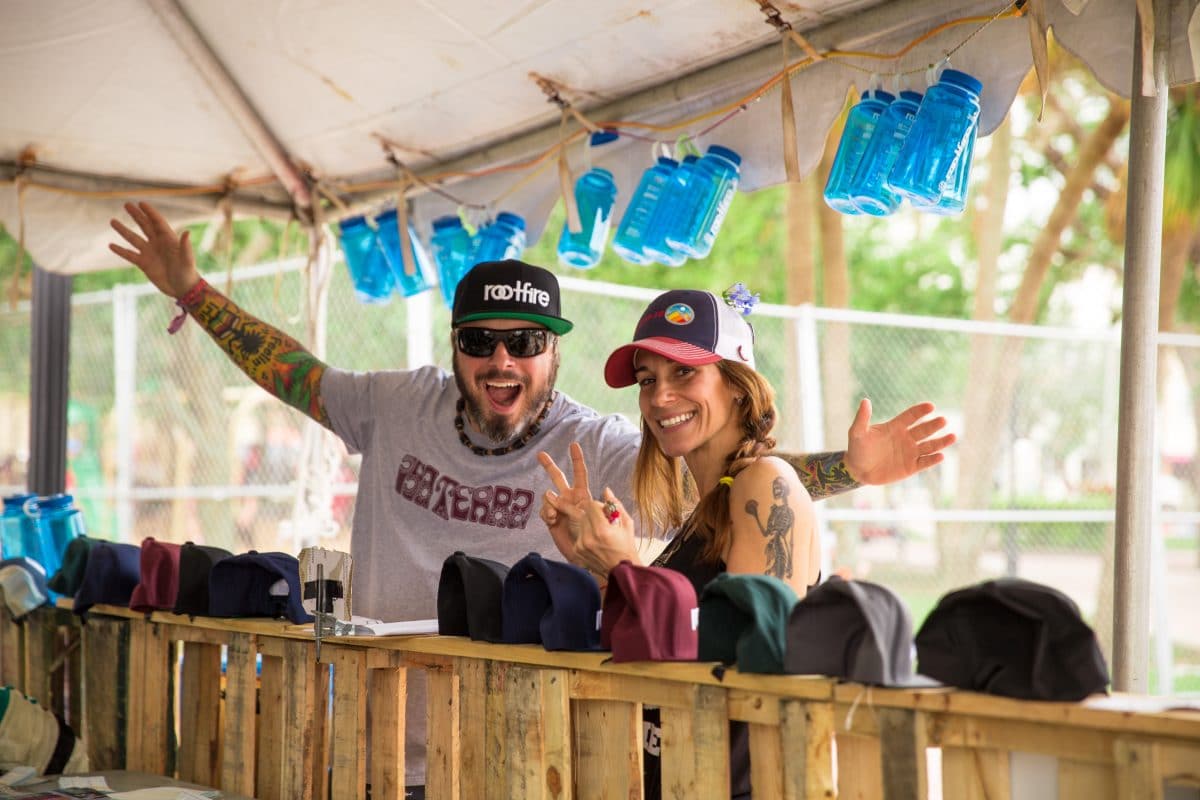 Good Guy Dave (author of The Cosmic Burrito) and his girlfriend at the Rootfire merch tent. As per usual, all smiles. 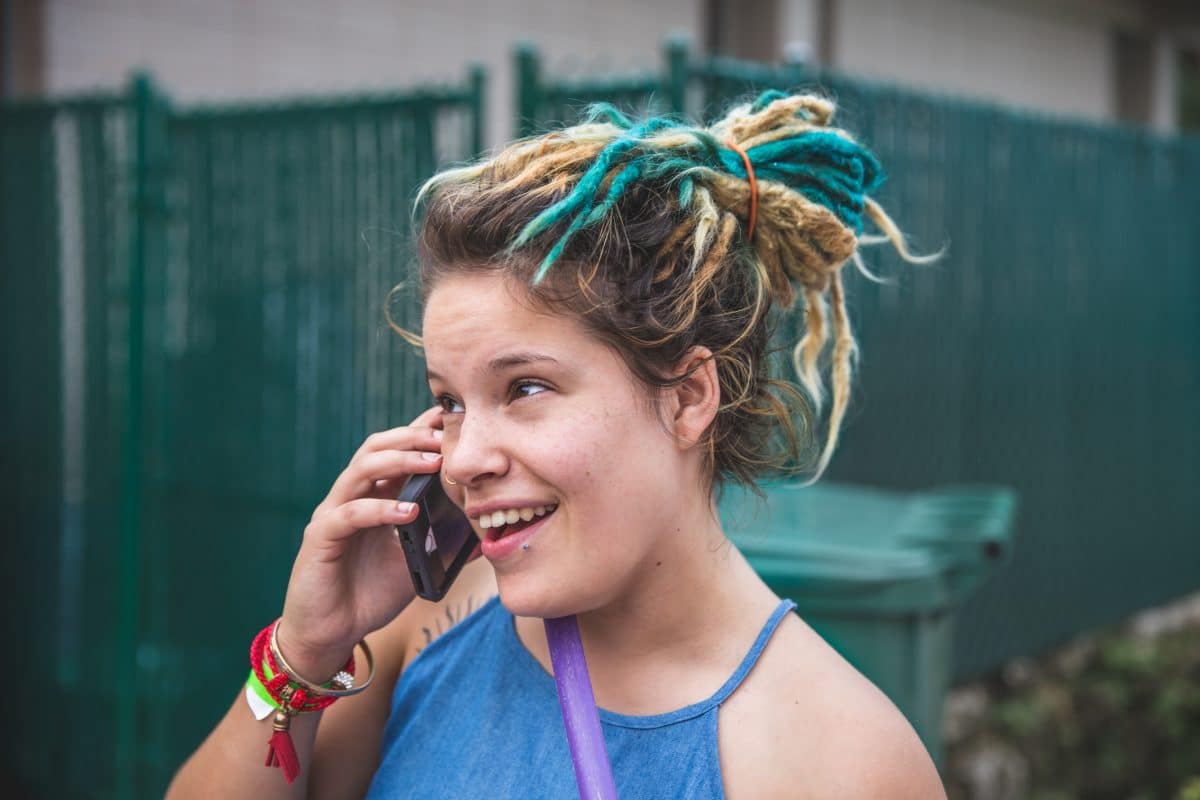 The people of Rootfire At The Park. Shout out to this girl for striking a ridiculously blasé “answering-cell-phone” face and having some of the raddest colored locks ever. 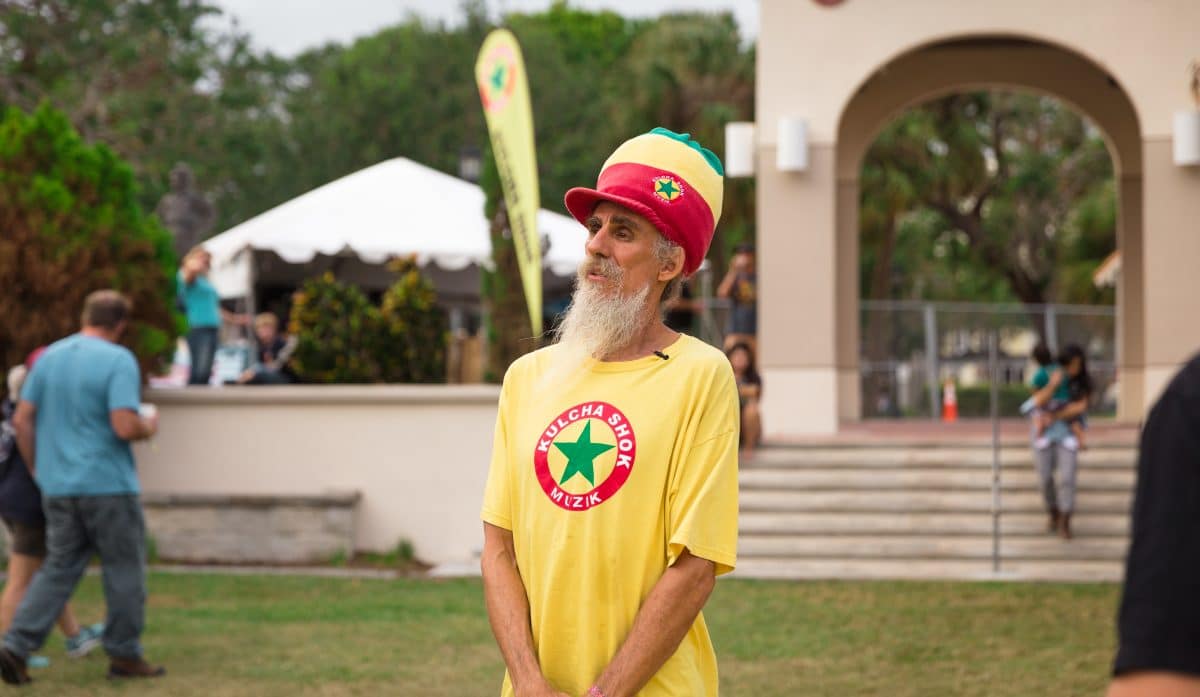 Lance O taking a short break from MC duties for his interview with our friends over at Sugarshack Sessions. Don’t know what anyone would have done without this man hyping up artists before they took the stage. 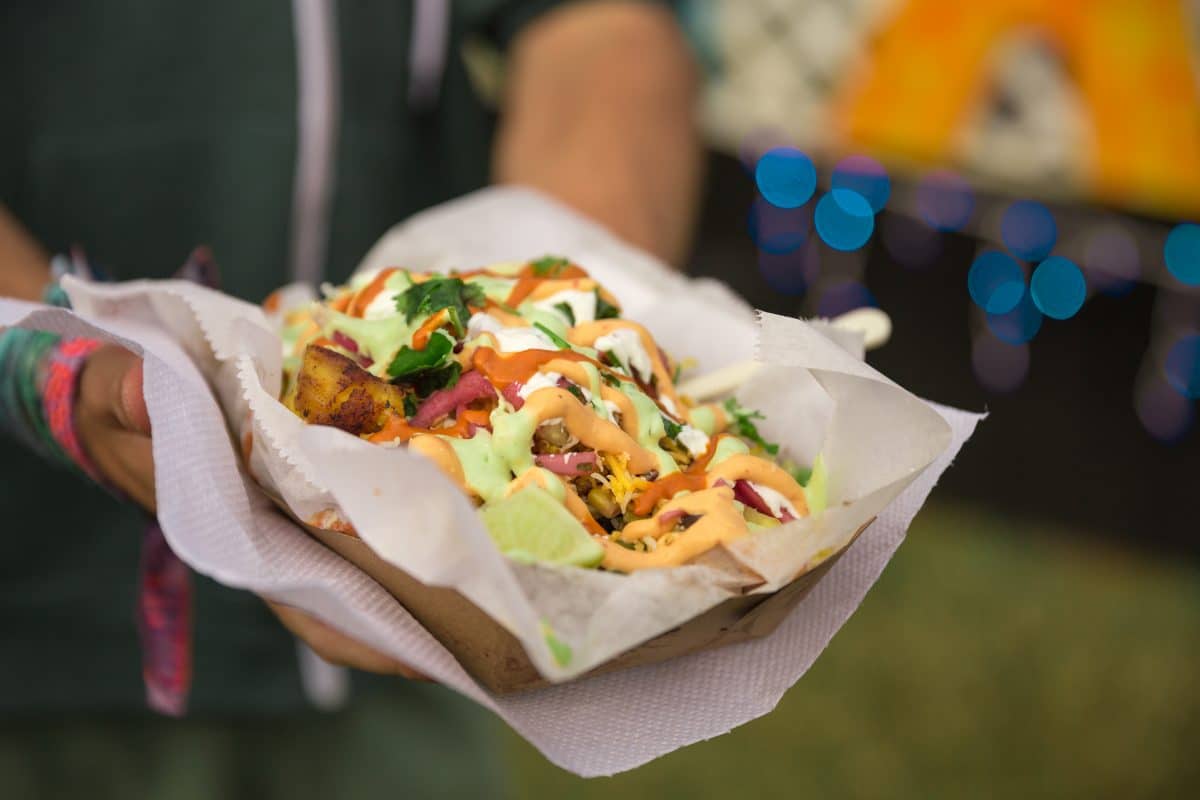 In case anyone was wondering what kept us sustained throughout the three day weekend, well . . . just feast your eyes on these nachos. Zoom in if you have to. One of many delicious options made possible by Rootfire’s vendor coordinator Brianna Petrocci. 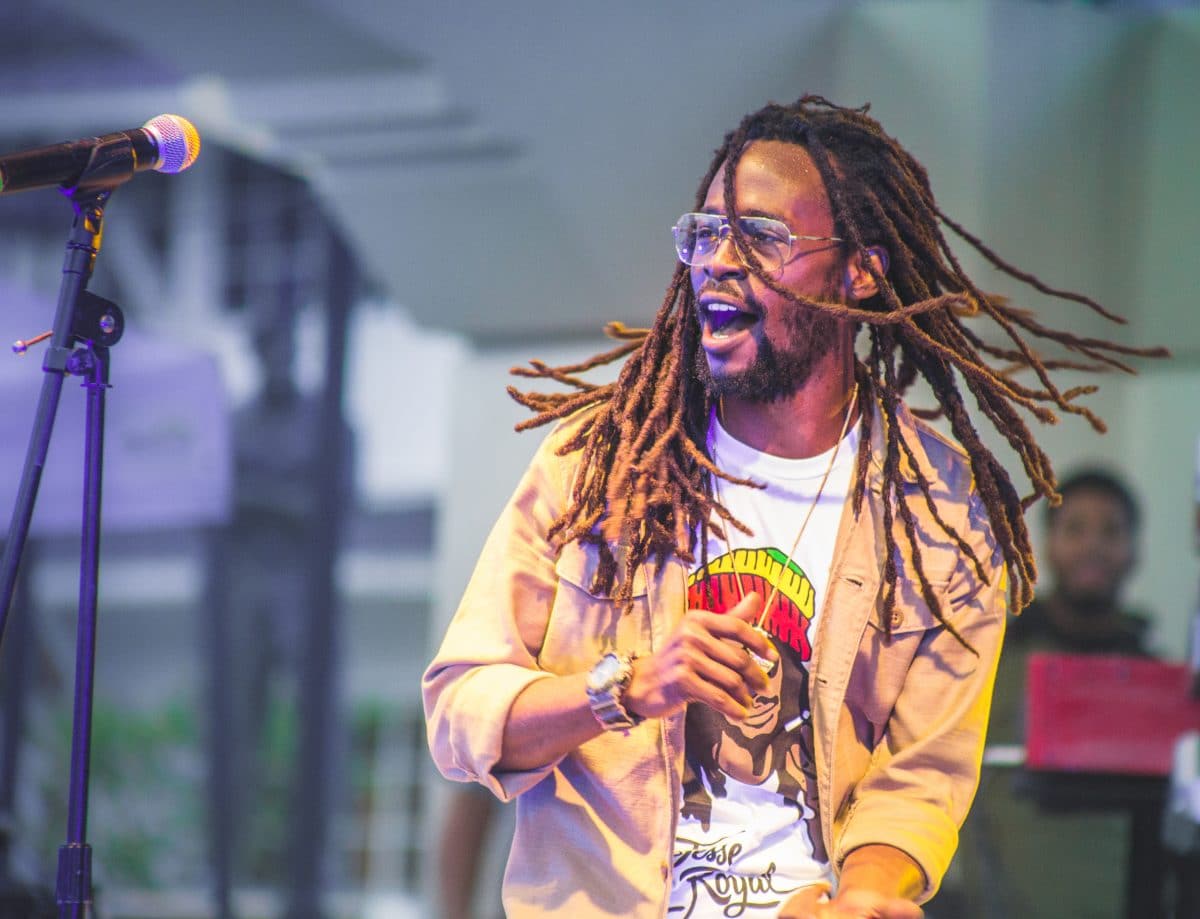 Pause. Jesse Royal‘s stage presence is a thing of beauty. The twenty-eight-year-old Jamaican singer brought a new life to the main stage around sundown. 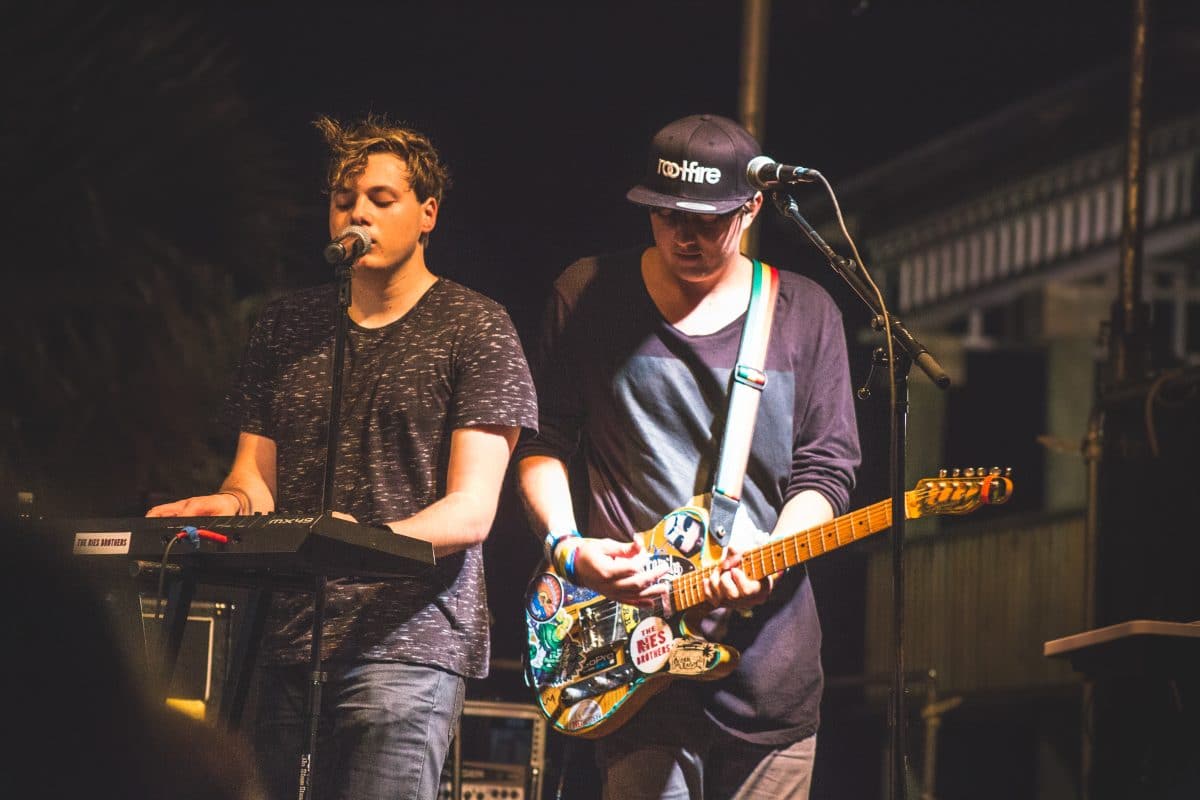 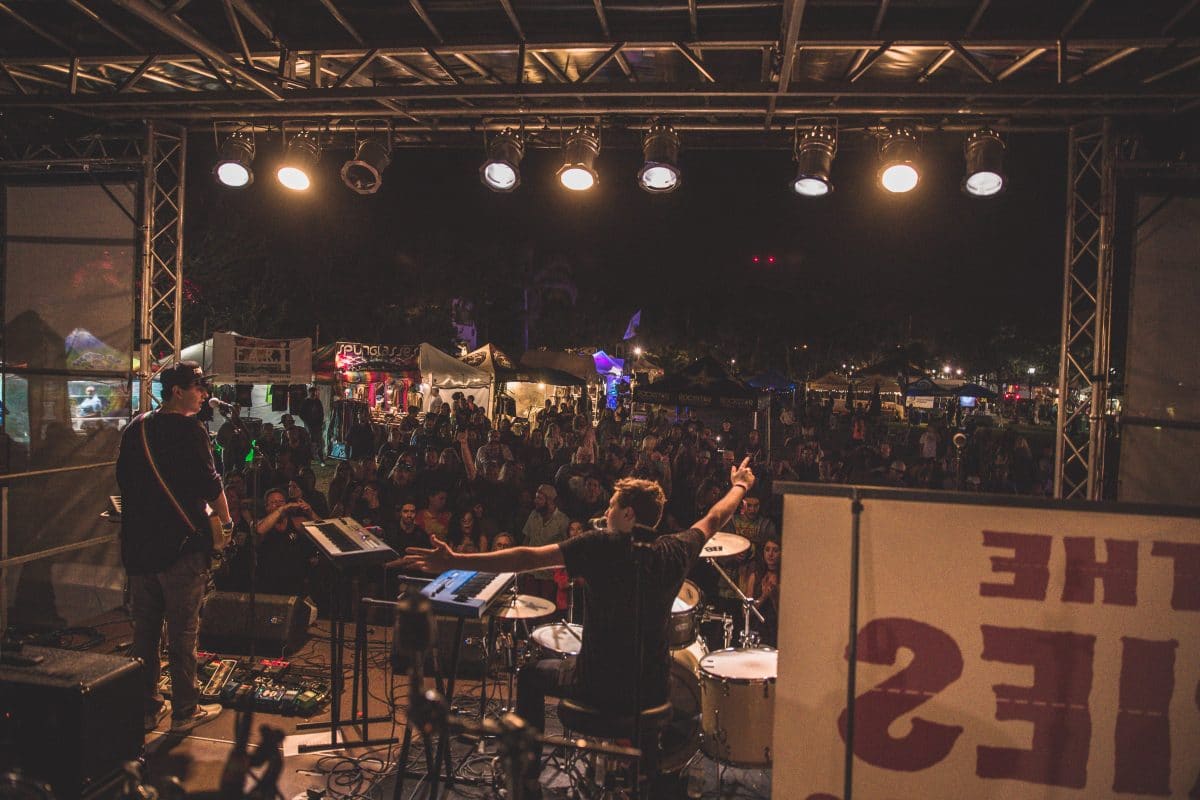 Hearing the Ries Brothers is what it’s like to experience raw talent. Never mind that Charlie Ries (22) sings, plays bass on keys, and drums at the same time, or that Kevin (18 (!)) can shred guitar beyond most of our wildest dreams . . . these guys consistently, prodigiously come up with amazing melodies for classic tunes. Haven’t heard of ’em? See for yourself. 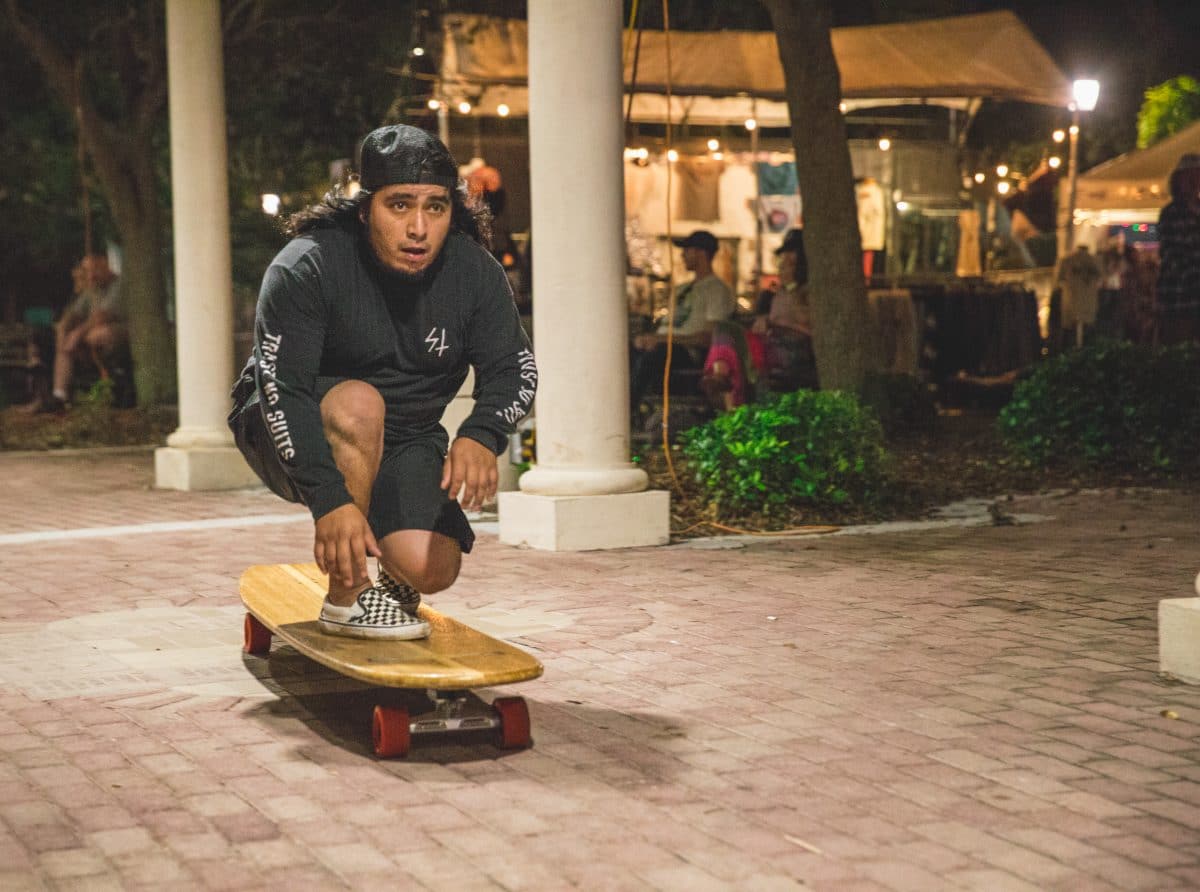 Seconds before peak tube face. This gentleman rode up and down the alleys of Riverfront Park on a six foot surfboard/skateboard hybrid, helping passengers young and old stand up and catch gnarly rides. 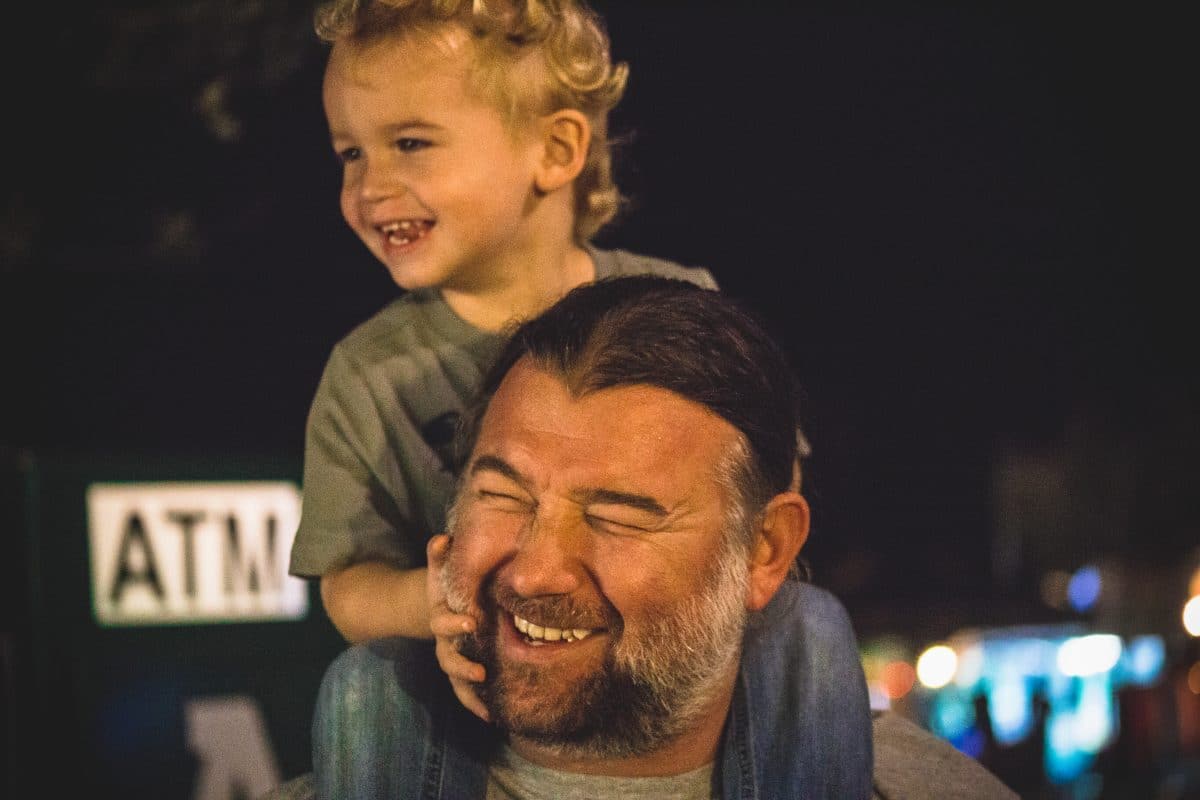 Another festival-defining moment. This is what Rootfire is all about: people. That, and locally-sourced Ahi tuna poke bowls (these two had just ordered “The Diablo”) with Rice Krispies in them. 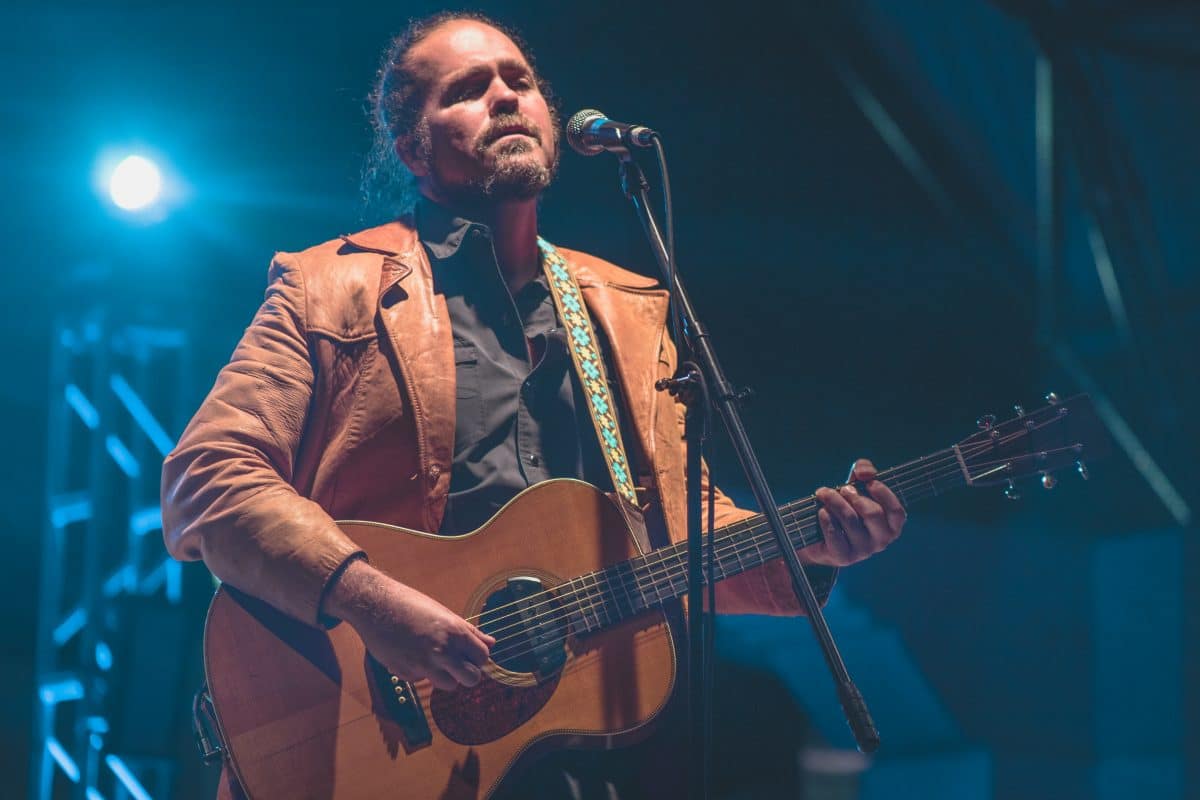 It’s been a while since anyone’s heard from Citizen Cope, but man were we glad to see him. Another festival highlight: hearing the entire crowd singing along to “Son’s Gonna Rise,” and then having that chorus stuck in your head for the rest of the night. 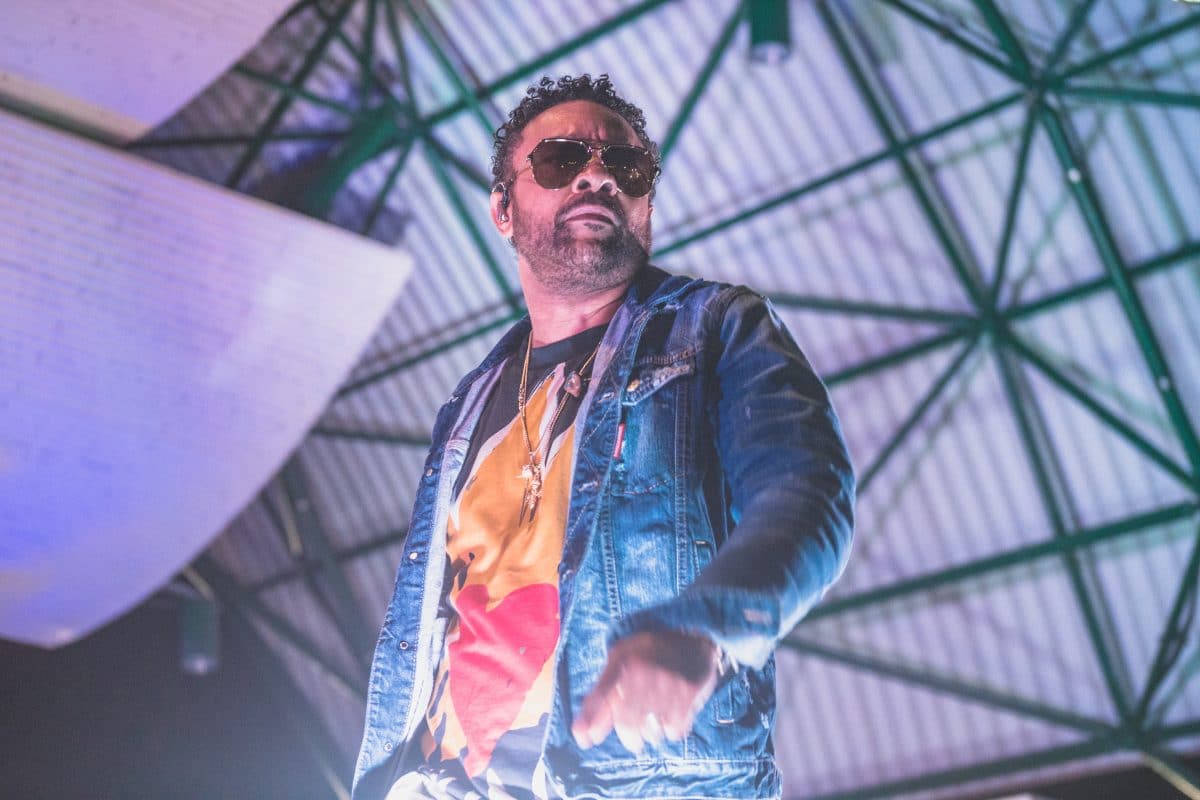 And this, my friends, is the face you make when you know your voice, your flow, even your swagger, is so iconic that it’s instantly recognizable the world over. Shaggy closin’ it down with the last set of the weekend. 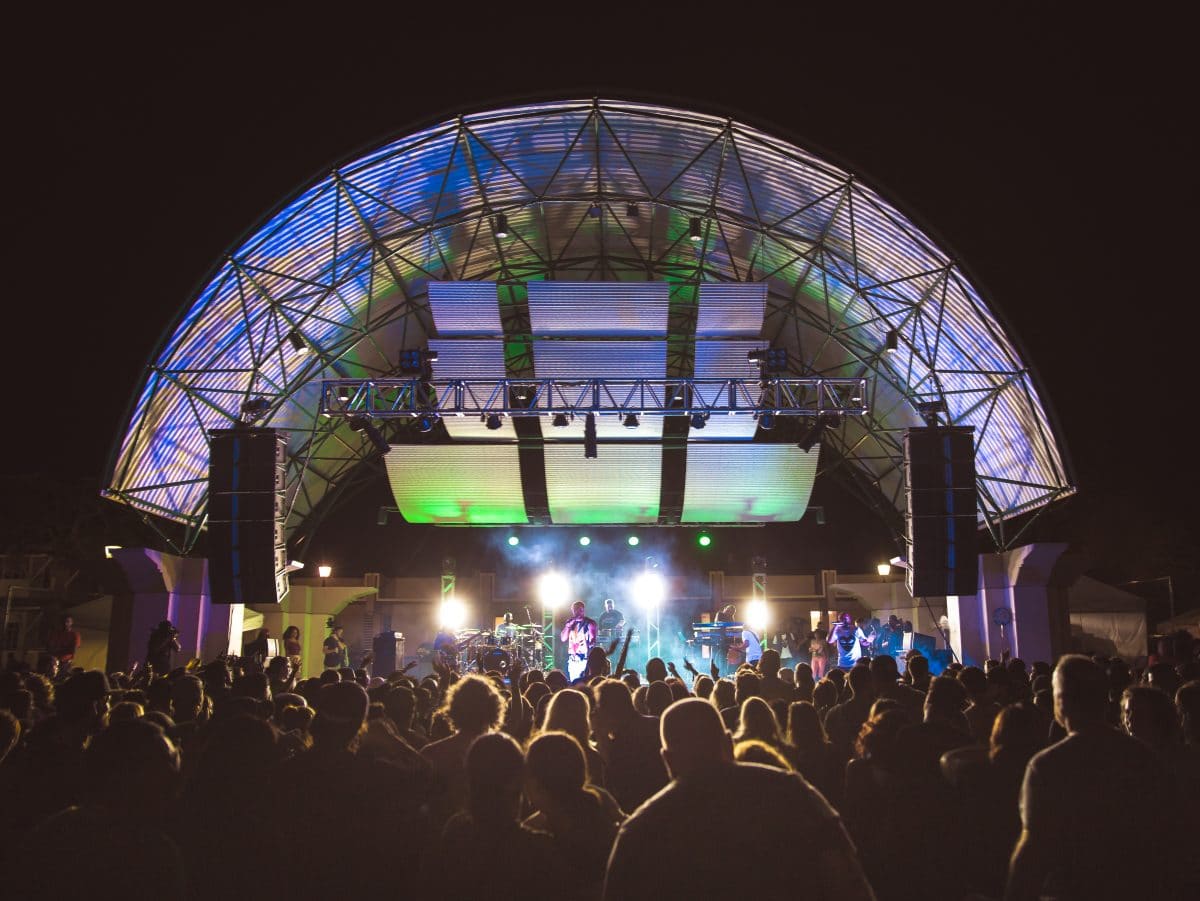 So that’s it. Ladies and gentlemen, the evening is over. We hope you’ve all enjoyed yourselves, and we’ll see you all again in 2018. Clear your calendars, and be sure to follow Rootfire on our social channels to stay in the loop as more events like Rootfire At The Park pop up in your area.

Vintage Tone: The Expanders – Old Time Something Come Back Again, Vol. 2 →
wpDiscuz
We use cookies to ensure that we give you the best experience on our website. If you continue to use this site we will assume that you are happy with it.Ok