Reggae Across The Street with The Elovaters

You’re in The Elovaters, an up and coming reggae band near the end of a month-long tour which had you traversing the entire east coast, from Florida to Maine. Your recently upgraded tour bus provides a modicum of comfort but not a shred of privacy. Your ultra-low budget does not provide the luxury of hotel rooms, so you’ve been showering sporadically at gyms or the occasional venue that provides bathing facilities, and sleeping submarine style in tight bunks three deep vertically. You’re sick of wearing dirty clothes and tired of eating crappy fast food.  In those precious moments when you are actually able to fall into some R.E.M., double yellow lines, cement dividers, billboards and green road signs fill your dreams. You miss the outdoors and the comforts of home that people take for granted, but understand this is the life of a traveling musician.

Your tour bus pulls up to the next venue, but this time rather than a club or theater, you find yourself on a secluded homestead on the outskirts of the Pine Barrens in West Creek, NJ. You’re only scheduled to play about two hours that evening and don’t need to get back on the road until the next day, so before and/or after the show you have plenty of time to take a long hot shower in a clean bathroom, do a load of wash, and stretch your bones in the backyard hammock. To make things even better, in addition to your performance, the event includes a potluck dinner. Guests arrive with a veritable cornucopia of delicious home-cooked dishes and desserts, adding to the barbecue that the host had smoking all day.

After the show when the guests have left the premises, you and your band mates kick back by the bonfire, gazing up at the moon and stars through the tall trees above you. When bedtime calls, rather than another night in your cramped bunk, you are invited to sleep in one of the many guest beds in the basement of the custom-built house, where murals of dragons, a fairy forest and hobbit holes adorn the walls, prompting mystical dreams.

The next morning, your host prepares a huge breakfast with fresh farm-raised ingredients that would put your favorite brunch place to shame: eggs galore, thick-cut bacon and chicken sausage stuffed with feta and spinach, four different types of French toast with three different types of homemade syrups or sauces and an array of fruits including grapefruit, Golden Delicious apples, Honeycrisp apples, Cara Cara oranges, clementines, juicing oranges and the “best cantaloupe ever,” according to The Elovaters.

After breakfast, if the weather agrees and time permits, the host invites you to take his kayaks for a cruise down the crick that runs along the property and out to the bay, where he will be waiting to pick you up with a ride back to the house.

With hospitality like that, this sounds like a welcoming stop for a road-weary touring band, or even a highly successful, unique bed and breakfast. The aforementioned host, Roland Hagan, has no intention of turning his home into a business, but he will continue booking bands to entertain his local community, friends and family, as these shows serve an additional, higher purpose: charity. 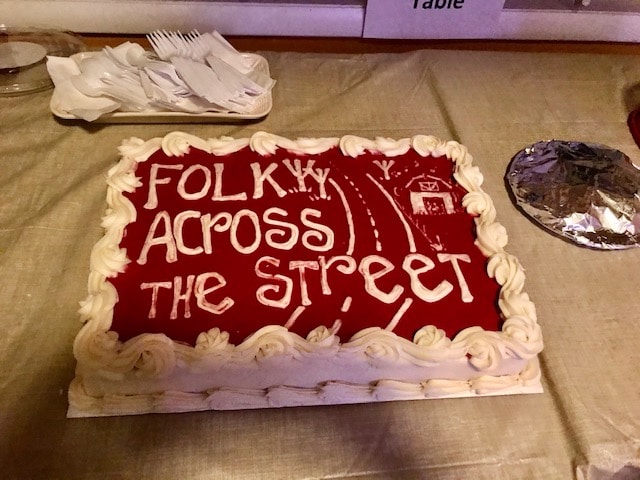 Roland has been organizing what he calls the “Folk Across the Street” concert series since three months after the passing of his late wife Stacy in 2008 to raise money and awareness for a meaningful cause, a scholarship that was created in her honor. The Stacy Moore Hagan Memorial Scholarship funds an undergraduate in the marine science research program at Stockton State University’s School of Natural Sciences and Mathematics, specifically supporting internships at the Rutgers University Marine Field Station in Tuckerton, NJ, and the Stockton Nacote Creek Marine Field Station in Port Republic, NJ.

Roland met Stacy when they were undergraduates at Stockton, located not far from Atlantic City, where both were studying marine science. Roland became the first student to intern at the Rutgers University Marine Field Station in Tuckerton, followed by Stacy as the second. They both went on to become professional scientists, and Roland wanted to perpetuate her memory by assisting other young adults in pursuing their dreams of following in their noble footsteps. According to Roland, the current Stacy Moore Hagan scholarship corpus is over $200,000 with $6,000 in awards provided annually to various recipients. 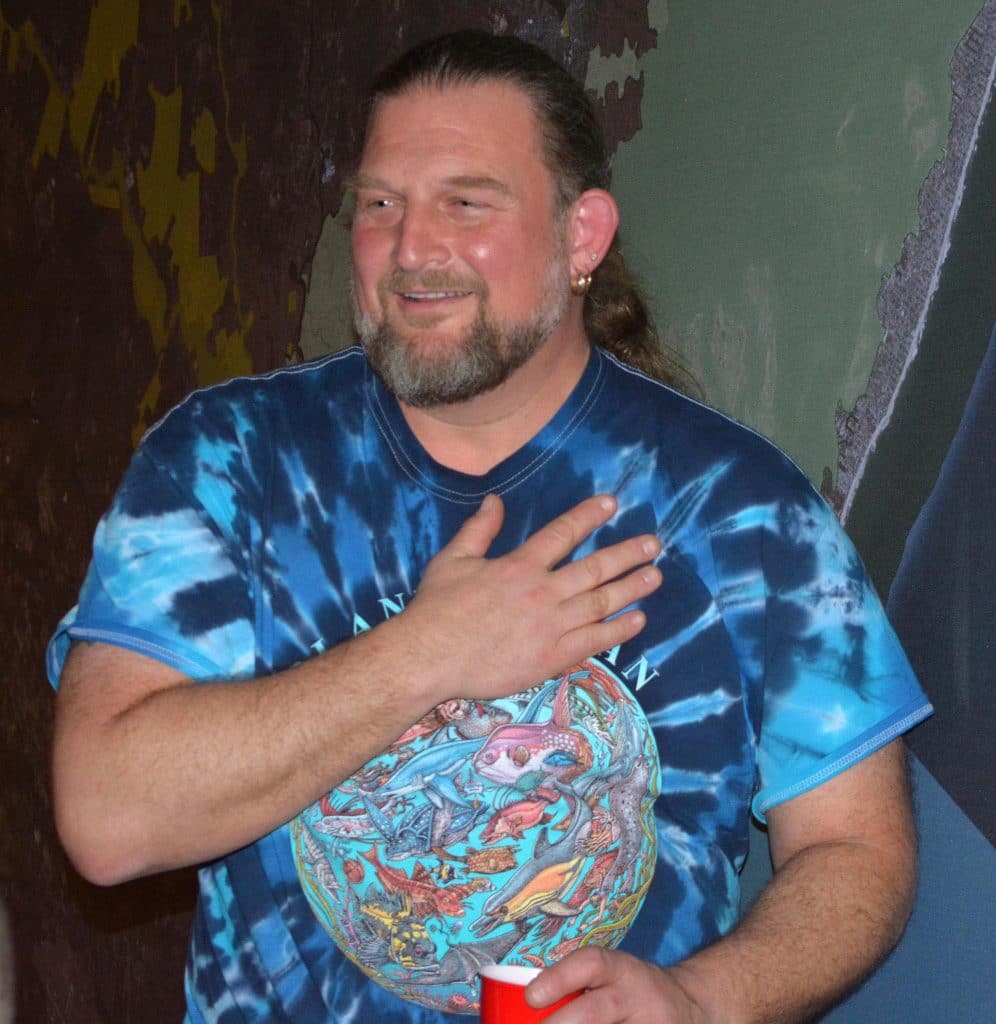 “Folk Across the Street” got its name due to the fact that all of the musicians preceded by The Elovaters played some version of Americana, bluegrass and/or folk music. The Elovaters performance marked the 45th show of the series, but its first reggae artist.  This seed for this event was planted when, while attending the Levitate Music Festival in 2018, Roland caught the band’s acoustic set in front of the Rootfire booth. Immediately “blown away” by their sound, Roland longed to introduce them to his community, an idea he never relinquished while envisioning them performing in his barn.

This performance exposed most of Roland’s guests to The Elovaters for the first time, but it likely won’t be their last. “Many converts were created,” he smirked, adding that he saw many carrying out CDs or vinyl from the merchandise table. Roland also noted that several guests mentioned that they planned to attend the band’s next shows in Brooklyn and Philadelphia.

When asked if all of the attendees at his barn shows were personal friends of Roland, he said, “There are core supporters of the scholarship that have access to reserve seats early, but almost every show has public announcement with new guests each and every time.” He further explained that technically nobody is “charged” to attend, but attendees are asked to make a “donation” to help pay the artist and to bring a contribution to the previously mentioned potluck dinner. 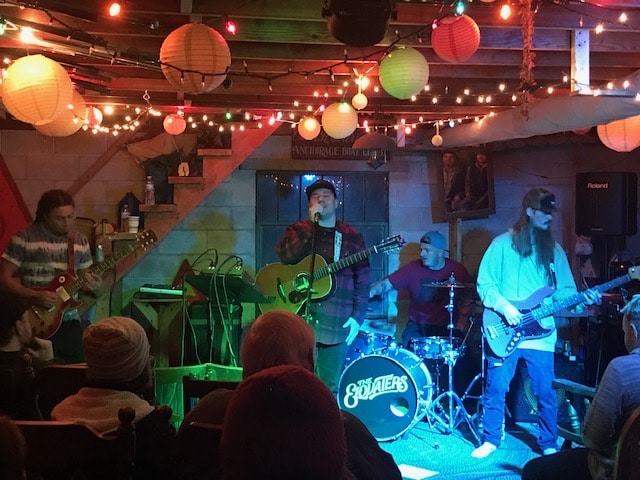 When “Folk Across the Street” first started out, artists donated their time and effort, and all ticket sales went to the scholarship. However, as the initiative became more ambitious, artists needed to be paid. This required larger venues, and shows were held at various local locations including Stockton’s campus student center auditorium which boasted a state-of-the-art sound stage and a seating capacity for 250. With the scholarship fund now self-sustaining, the intimate events held in his barn these days essentially serve to advertise/highlight the scholarship, but Roland still provides donation envelopes on site.

Donations received by the foundation have ranged from $5 to $3500, with some generous commitments of $1000 per year for 10 years. People interested in donating to the scholarship fund can do so here. Using the drop down menu, select “Other” and type in “Stacy Moore Hagan Scholarship.”

← Ticket Giveaway: The Movement – Ways Of The World Tour Phase 4