This year marks the twenty-fifth anniversary of the Sierra Nevada World Music Festival, a staple event within the roots reggae and world music communities of California and beyond. SNWMF has a reputation for stacked lineups of classic roots artists from the golden era of ’70s and ’80s reggae balanced by up-and-coming talent from across the world. Acts like Cocoa Tea, Dread Mar I, Max Romeo and The Mighty Diamonds are just the tip of the talent iceberg that makes up this year’s lineup.

Many of the world’s most talented roots reggae artists had their first shows in the states with the help of SNWMF founder Warren Smith. Smith caught the reggae bug back in the ’70s, founding Reggae Booking International to help artists from Jamaica and beyond get their foot into the American market. This eye for talent continues to be showcased year after year at the Mendocino County Fairgrounds in Boonville, CA.

Leading up to the twenty-fifth year of SNWMF, Rootfire chatted with Warren about the longevity of the festival, the state of reggae today and what he’s looking forward to most at this year’s event.

Rootfire: With 2018 marking the 25th anniversary of SNWMF, this is one of the longest running festivals in the country. What inspired you to start throwing an annual world music festival 25 years ago? Has the intention changed over the years? 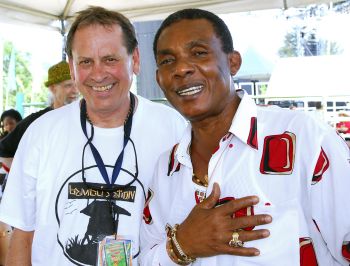 Warren Smith: In the early years of my involvement with reggae, musicians coming from the Jamaican ghettos were just on fire with devotion and enthusiasm for their music and message. During the late ’70s and early ’80s, I had a company called Reggae Booking International. We were bringing dozens of roots reggae acts from Jamaica to the States. The intent behind SNWMF was to present roots music out of Jamaica. I had relationships with all these artists and the opportunity to present them. It was very rewarding in that sense – connecting with old friends and associates. The acts presented at SNWMF have changed slightly with the years because a lot of the roots artists have passed. There was a time I could pick up the phone and call Gregory Isaacs, Peter Tosh, Alton Ellis, Sugar Minott – too many to name.

SNWMF began presenting new reggae artists from Jamaica and around the world, as well as world-class world music acts. New younger acts branched out to the dancehall vibe in the ’90s and early 2000s – that disrupted the roots music coming out of Jamaica and changed it forever. However, it also gave license to bands around the world to form their own brand of reggae roots music, particularly in the US where we have a special brand called Cali Reggae. Prior to the dancehall emergence, American reggae bands had a very difficult time in the marketplace. When dancehall became predominate, there was an emergence of reggae in many different parts of the world. SNWMF began showcasing these acts from other countries than Jamaica.

Another important reason SNWMF was created was to help to promote cultural awareness and diversity.

RF: Who are some artists that you have helped debut in the US?

WS: There are so many. Many I worked with prior to SNWMF such as Toots and The Maytals, Third World, Burning Spear, Peter Tosh, Inner Circle, Dennis Brown, Jacob Miller, Hugh Mundell, Augustus Pablo, Big Youth and others. One of my earliest shows featured Toots and The Maytals, Dennis Brown and Inner Circle with Jacob Miller at Winterland for 3 nights in July of 1975.

SNWMF has presented rare performances in the US by artists such as LKJ and Prince Buster and reinvigorated acts like The Congos and Abyssinians. Junior Byles’ only performance outside Jamaica was at SNWMF. We were the first – or one of the first – to present Protoje, Roman Virgo, Blue King Brown, Kabaka Pyramid, Midnite, Anthony B, Fat Freddy’s Drop, Jah Shaka, Mellow Mood, Morgan Heritage, Alton Ellis, Midnite, Leroy Sibbles, Misty in Roots, Michael Prophet, Derrick Morgan, The Ethiopians, The Maytones, Tarrus Riley, The NoMaddz, Big Youth, The Mighty Diamonds,The Heptones…there are so many.

RF: Cultural and social tensions are currently prime in the media limelight. In the past, especially during times of conflict, people have looked to songwriters and musicians for leadership, voice and perspective. Is music still playing this role? Who are some of the current artists giving voice to the challenges of today? What classic albums do you feel have a message that is particularly prevalent in our current climate?

WS: In terms of reggae and world music, music is not playing as much a role as it did in the past. Jamaican reggae is becoming more religious, so within that social context there has been growth. On a political level, we don’t hear as much in this music about issues currently in conflict – however, current artists that do come to mind are Steel Pulse and Nattali Rize. Classic artists whose message is particularly prevalent today – Bob, of course, all of LKJs albums, Peter Tosh, Jimmy, and Spear.

RF: The music industry has changed substantially over the past 25 years. As more music becomes accessible via streaming sites like Spotify and Apple Music, are we seeing a resurgence in popularity of some of the classic roots artists featured at SNWMF25? How have you seen the demographic of festival attendees change over the past 25 years?

WS: The jury is still out on whether the streaming sites are supporting a resurgence in the popularity of roots artists. We have certainly seen the growth of the pop side of it, but for the most part, the last few generations of Americans have not embraced roots music. As far as our show, the demographics have stayed the same – our audience is very diverse, there are a lot of families with kids. Our average age is probably a little higher than some of the other festivals.

RF: From your earliest work in the reggae industry you have been a diplomat for reggae from across the world. While the genre has its roots in Jamaica, it has undeniably become a global music over the decades. In America, there has been a natural progression toward melding reggae with rock. In your opinion, how has this affected this country’s take on the genre? Is this providing a gateway for more listeners to discover a wider variety of reggae acts? Is it watering down the substance at the roots of the genre?

WS: It’s all legitimate – the American bands traded Jah for Jane and did not include the traditional religious aspects of reggae when it emerged through the dance hall arena. I would hope the music is providing a “gateway” as you describe it – and maybe to some degree that is true – no more so than for the Jamaicans who are doing it. The industry has gone from being naïve to being very sophisticated, from Jamaican producers that had the Jamaican market in mind to professional producers who have a pop sense and mainstream western markets in mind.  So there is not as much magic in the music. It’s all very sophisticated and very intentional the way it is produced in the studio. That being said, the important thing is for music to be heard.

RF: The lineup for this year’s event is steller. Who are some acts playing that you are personally particularly excited to see? Any artists returning this year that you have fond memories of from years past?

WS: Honestly, I’m looking forward to seeing as many of the artists as possible. We have two megastars this year – Dread Mar I from Argentina and Teddy Afro from Ethiopia – who are huge stars in their own countries or regions but relatively unknown to our audience. I’m very excited about Cocoa Tea, The Mighty Diamonds, Max Romeo, Wayne Wade and am anxious to see Dread Mar I, Teddy, Nattali Rize, Flavia Cohelo, and Kingston Rudieska. Beres has always put on a beautiful show for us. I could go on and on – I think all of the artists on the lineup are very special.

RF: Do you have a message you’d like to share with the fans of reggae music out there?

WS: Keep supporting the music – and thank you for supporting SNWMF for twenty-five years. 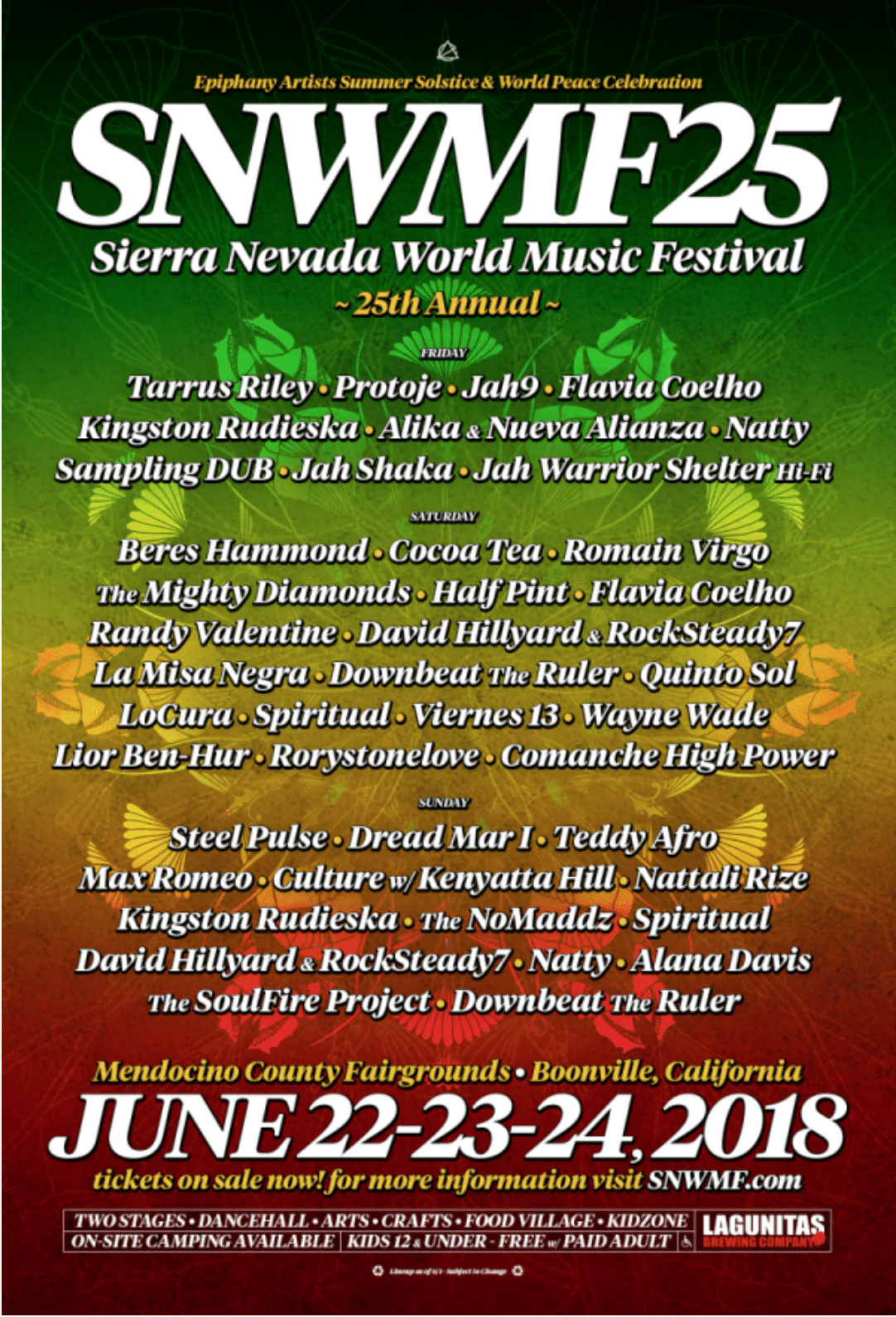 ← Spirits All Around Us: The Impact of John Brown’s Body

The Live Touring Forum – How Do You Get the Attention of an Agent? →