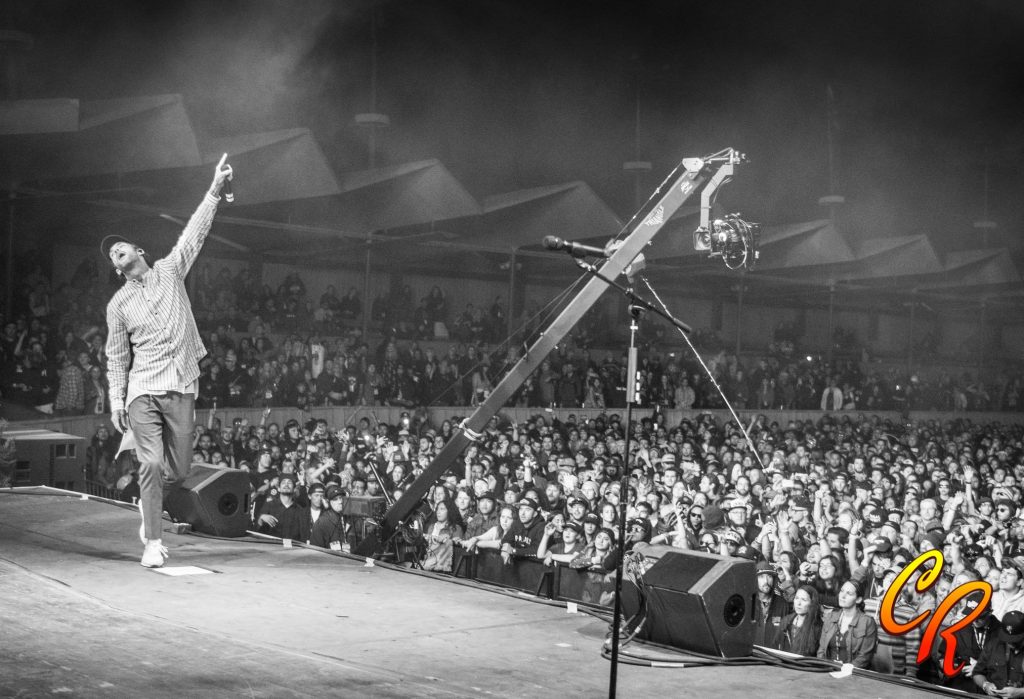 I’m sitting on a plane on my way back to the Midwest. I’m coming from the bright West Coast where I attended California Roots Festival in Monterey, California, for the fourth year in a row. The sunburn is finally starting to fade from my cheeks and chest, but I have memories of this blissful weekend that have not yet faded (although some are a bit hazy—largely due to the herb smoke that came at me from every direction over the course of three days, which was great if you ask me).

How can one even begin to describe The Cali Roots Experience? I can do my best to highlight some of the best moments I witnessed throughout the weekend… I’m sure you have your own as well, and we would love to hear them (read about the Cali Roots vinyl giveaway below!).

As I look at my folded schedule, I remember some of my favorite performances from Friday, May 26 (Day 1). My friends and I arrived at the Cali Roots stage early to see SYNRGY, a very soulful reggae band, kick off the festival with high energy at 11am. Seeing them for the first time, I was impressed by their bouncy, rootsy rhythms and animated vocalist.

From there we headed to The Bowl to see Passafire immediately afterwards. Even in the morning, the place was already full of people having a great time. Passafire is composed of strongly talented individuals, each with their proper times to shine. It was a top notch show. I was happiest when they played “Dimming Sky,” which is one of my favorite songs of theirs—and well, I was happy for a lot of reasons at that point. Cali Roots was in full stride early.

Cali Roots attendees were lucky to have The Expanders Sound System, fronted by Devin Morrison of The Expanders, playing roots reggae in between acts in The Bowl. The atmosphere created from this music corresponded well to different parts of the day: sometimes it was relaxed enough for people to camp out on blankets, other times upbeat enough for them to sway and dance when they wanted. It was fun to see Devin sing along to the tracks on stage and really own his role as a true roots reggae expert, bringing that sound to the masses. 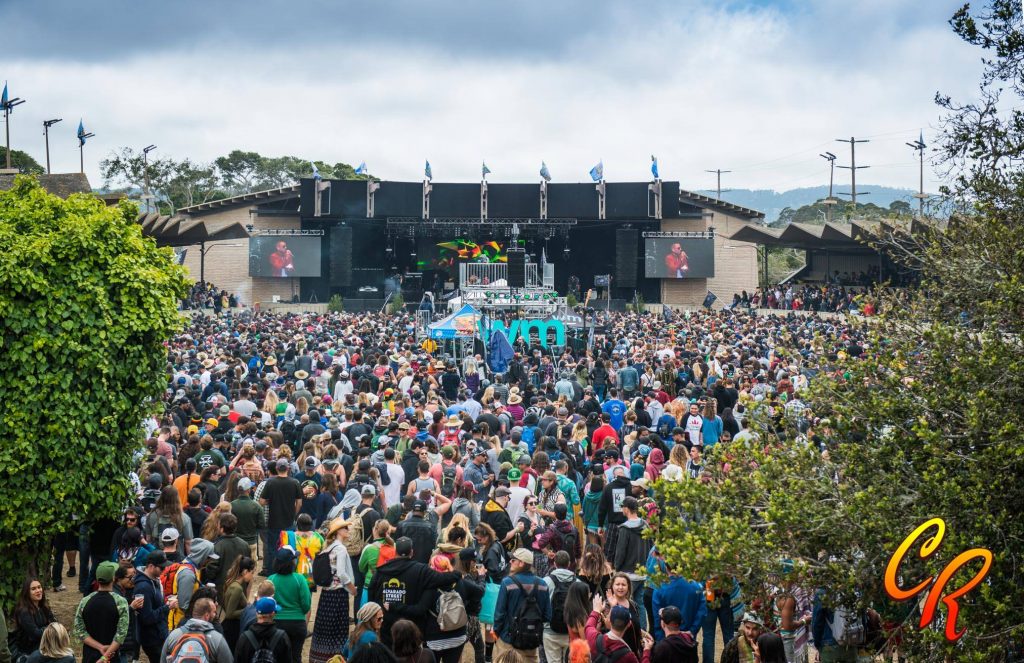 Later that day, Matisyahu had a lot of heart in his Cali Roots performance and it was tangible. On stage I recognized members of Dub Trio in the band, creating heady vibrations that shook the ground.

For some reason I feel like Matisyahu has this superpower, where he’s able to look every single audience member in the eyes while he’s performing. Am I the only one who thinks that? He’s like a reggae wizard. Once again he uplifted and embraced us with spiritually activating lyrics and melodies.

The last act I’ll point out about Day 1, one of my true favorites of the day, was Stick Figure. Of course these guys are always bringin’ it, they’re another band with strong individual talents throughout, everyone from KBong to Johnny Cosmic to Cocoa. Their music is full of life and all the emotions that come with it, all the right ups and downs. Personally, my peak moment was when Eric Rachmany of Rebelution joined them for the song “Mind Block”—holy frick. Melted.

There comes a point in the day of a festival where you and your friends are on the same level, the same wavelength, just enjoying the music… but you ain’t even speaking English anymore and the rest of the night is a rush of colorful music and dancing. After some more great performances, we had made it through Day 1.

By Day 2, Saturday, the sky had opened up and the sun was blazing down. Unified Highway really impressed me early in the day—I hadn’t checked them out before, but I thought their live show sounded top notch. I mean, substantial basslines, a horn section, a skillful integration of drum machines and electronics… I would love to see them again. They were fronted by Eric Rachmany (major props for taking the late shift on Day 1 and an early one on Day 2, Eric!).

My personal highlight of the day in one word: Protoje. Damn! This is some of the best Jamaican reggae around right now. He has a unique voice that slides up and down like a carnival ride. He and his crew were energetic and captivating—they made me feel like I had just joined some sort of team. This could have been partly due to his camo getup, rasta symbols all over, and the two ladies backing him up with great voices and dance moves. They sang hits like “Criminal” and “Who Knows.”

Something else I’ll note is that there was So. Much. Weed. being passed around during Protoje’s set. Joints. Pipes. Even a steamroller was in my hands at one point. There was smoke everywhere. It was then that I realized this stage’s name, The Bowl, had a double meaning. It was the place to be.

During this day, Alborosie and Yellowman were crowd pleasers, along with Tribal Theory, who I have dubbed The Backstreet Boys of Reggae. In a good way. Easy Star All-Stars were a hit. More of that colorful musical backdrop formed around a dozen talented acts.

If you are the kind of person who can get through an entire day of bands from 11am to 11pm without stopping, you deserve some kind of award. For real. Tell me your secret ways.

But… sometimes you just gotta pass out in your hotel room early with a slice of pizza in your hand. Because you know what awaits on Day 3.

Sunday, Day 3, was the rootsy day! Oh Cali Roots, you really outdid yourself with this day’s lineup.

There was a large crowd reserving their spots for Jah9 in the morning, myself included. Finally, my chance to see this amazingly talented musician whose music is so conscious, powerful, and moving—and very much needed in these times. As she walked out on stage, her vibe was thoughtful, and she looked fierce—she was about to drop some topics on us which were meant to get those thought gears going. I loved her ganja tunes, “Steamers a Bubble” and “The Marijuana.” Members of the crowd held up avocados during the song “Avocado.”

What makes Jah9 so special is her ability to bring heavy topics to a song in a graceful way, using her music to spread a message. She wants to empower the community. She wants to empower women. She wants us to know that staying silent is part of the problem. There is no man in the sky who is going to save us. It’s up to us to live healthy, right, and humble. She said, “Awareness is the key.” Thank you Jah9! 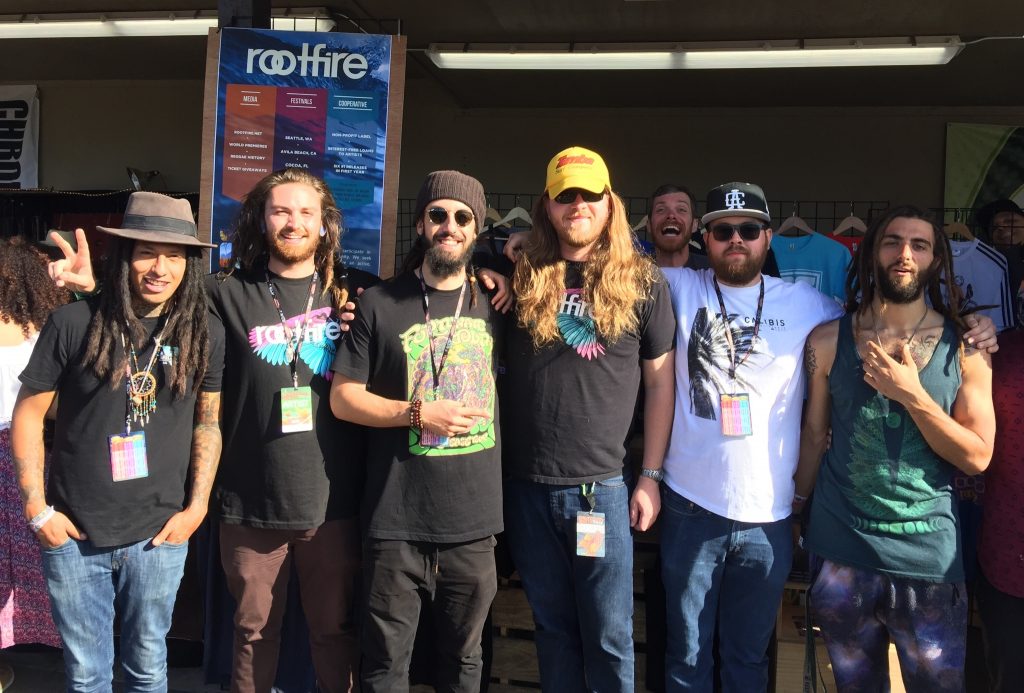 Importantly, Cali Roots booked great Jamaican acts this year—including Jesse Royal, Protoje, Yellowman, Jah9, and Anthony B. It makes you realize that your favorite American reggae bands owe so much to Jamaican reggae—without this music, we would not have bands like Rebelution and SOJA. We owe an incalculable amount to roots reggae from Jamaica and need to respect the circumstances from which it came about. Oppression. Strength in unity. A light shined in dark places. Now reggae has spread, evolved. We have rootsy bands in America and elsewhere, and not-so-rootsy ones that still have the zest of this amazing musical genre-twist that started decades ago.

One thing I love about Cali Roots is how the artists are in attendance, and you can mingle with them if you see them around. It’s up to you if you’re gonna geek out or play it cool. At the Anthony B show, which was amazingly catchy and high energy to say the very least, I got to meet Hash from Thievery Corporation in the crowd. He was wearing a black suit which made me pretty confident that it was him when he caught my eye. Later that night I got to see him shred on the bass and stomp around the Cali Roots stage. In my mind, Thievery Corp is simply one of the best bands out there. They have such a sophisticated, worldly sound that stretches from lounge to reggae and elsewhere.

A band has to be incredibly solid to pull off two drum kits simultaneously. The people in Thievery Corp know what they’re doing. Their vibrant vocalists, who switch off to take the lead on different songs, are spirited centerpieces to the band’s live shows. The band incorporates the sitar too which is a treat for lovers of world music and their famous song “Lebanese Blonde.” They closed their set with the high energy banger, “Warning Shots.” 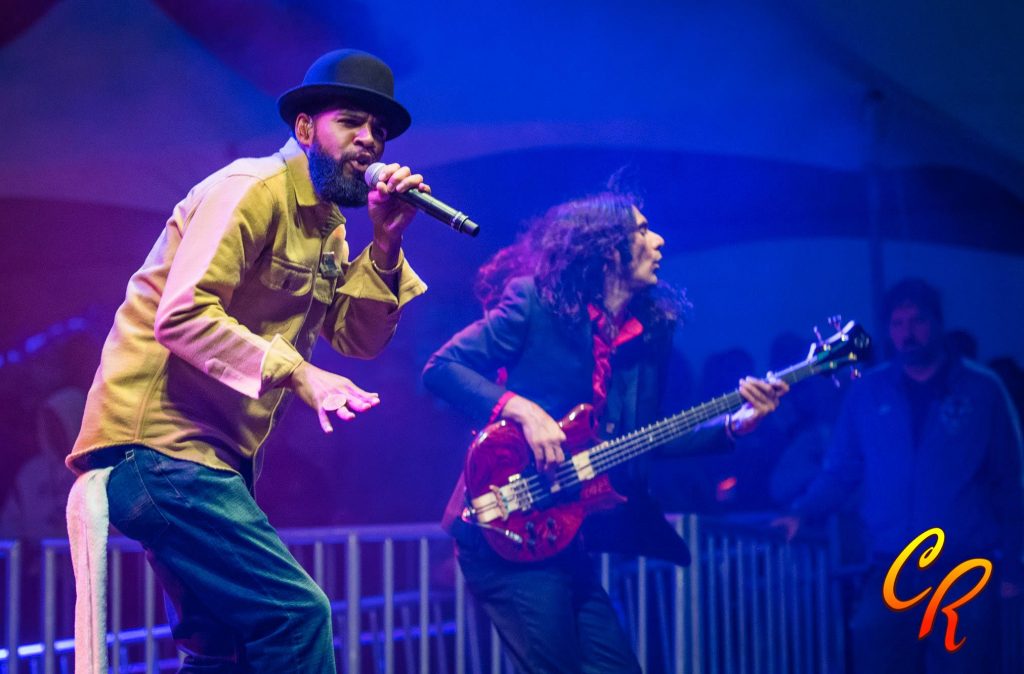 Earlier that day, John Brown’s Body had dominated the Original Stage and captivated fans with their songs that are somehow both rootsy and futuristic sounding.

Some things I love about watching JBB: their guitarist Jay as he steps from side to side, their lead singer Elliot’s face as he often appears in a trance, the horn players as they play in a united-motion, the drummer Tommy as he’s deep in the music looking like he’s having the best time of his life. Something else that was fun to see was some of my favorite people watching from the side of the stage: Scott from Stick Figure, Nathan from Iya Terra, and some Rootfire peeps. My favorite moment of the set was when JBB performed “Empty Hands” and mixed it with the classic 10 Ft. Ganja Plant tune, “Too Much Gun a Bust.” Fire!

Collie Buddz and Iya Terra were also fire that day! And I discovered two new favorites who I had never seen or heard: Mellow Mood and Humble Soul. Excuse me while I download all the music they’ve ever released.

Dirty Heads were a fantastic ending to this year’s lineup, and I walked back to our hotel with the song “Red Lights” blasting in my head. 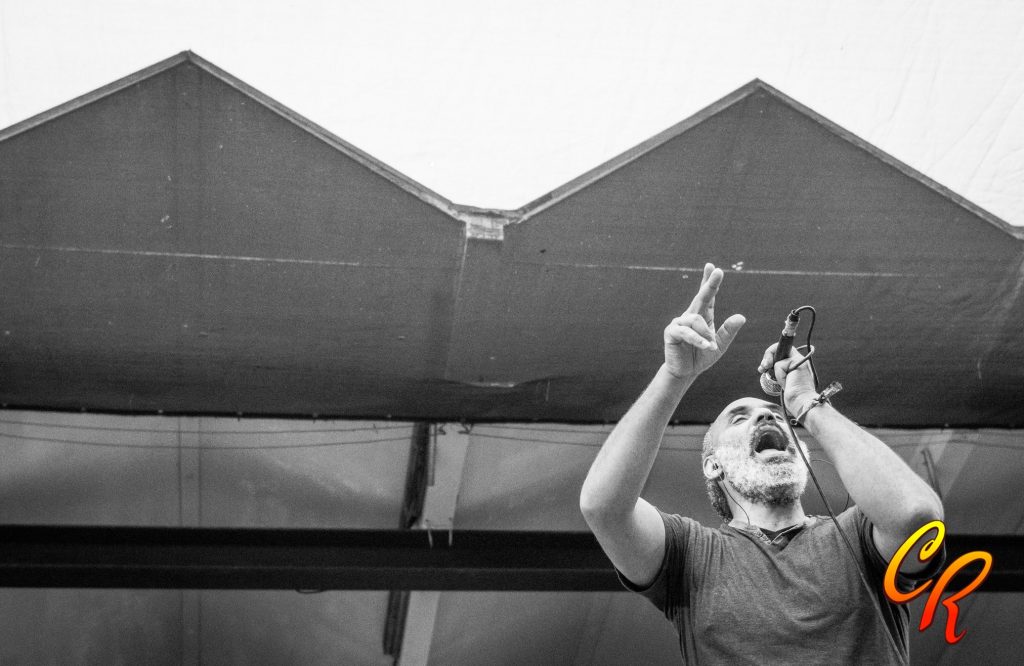 Are you still with me?! The Cali Roots Experience is so epic that it’s hard to explain without going down some rabbit holes and leaving parts out—which is why you just have to be there if you can! I highly recommend this festival to anyone who loves reggae or is just looking for an uplifting time with great people in a beautiful place.

This year, Cali Roots put a collection of music by their performers on colorful vinyl, and we have one to give away!

What was your favorite part of Cali Roots this year? Leave your comments below, and enter to win a copy of the official Cali Roots Vol. 1 Limited Edition Picture Disc LP! 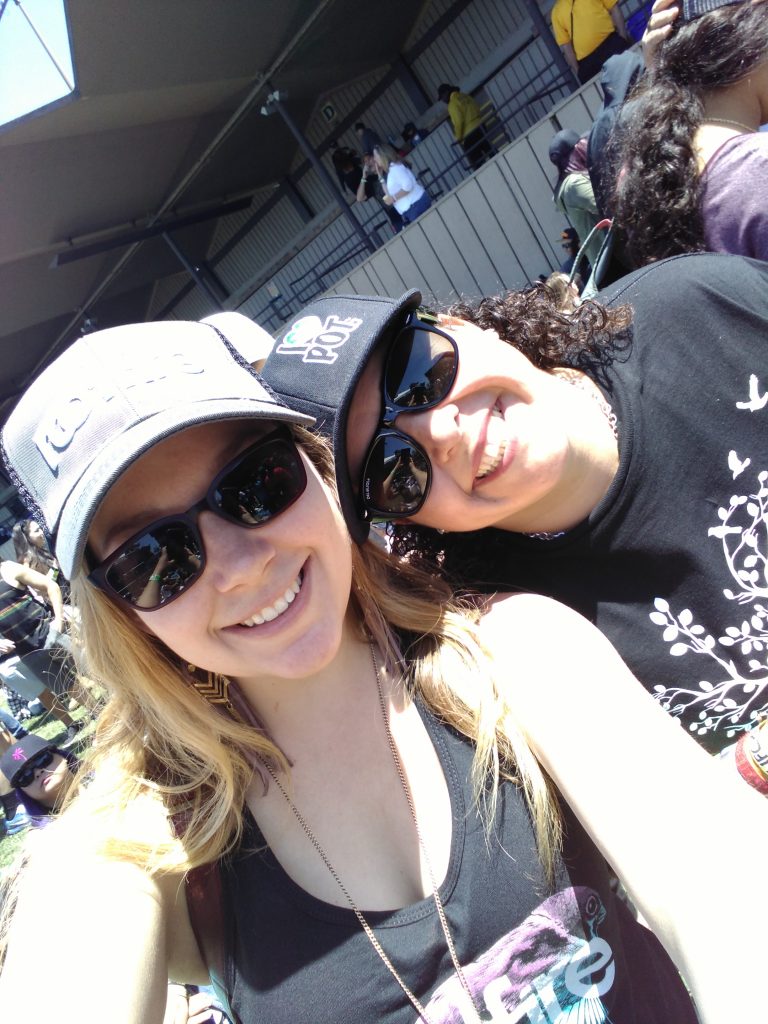 ← Catching up with Ry Mo of Slightly Stoopid

The NorVa and Stick Figure →
wpDiscuz
We use cookies to ensure that we give you the best experience on our website. If you continue to use this site we will assume that you are happy with it.Ok