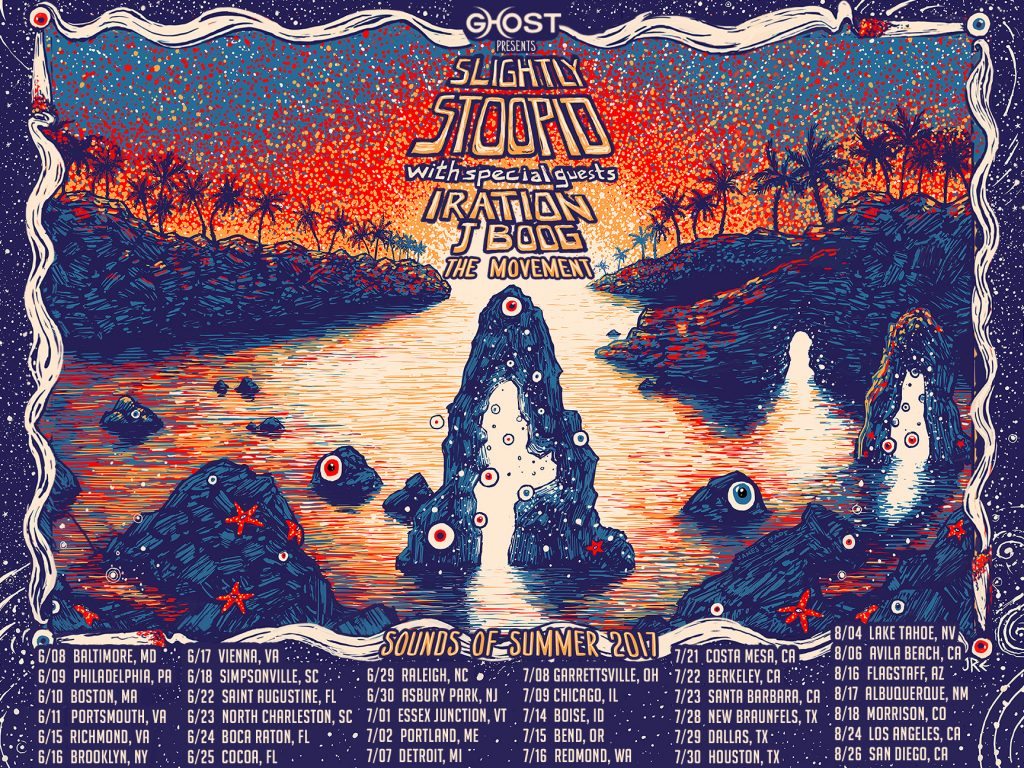 With the arrival of summer, there are certain things that people who live on the East coast can expect: hot, humid days, powerful thunderstorms, warm ocean temperatures, suntans, barbecues, music festivals, the jingling bells of the Good Humor ice cream truck peddling Toasted Almonds and a Slightly Stoopid tour. This year, the reggae rock giants take to the road with American reggae heavyweight Iration, superb Samoan songster J Boog and, most exciting for the Rootfire family, The Movement.

The Sounds of Summer 2017 Tour, as it’s dubbed, kicks off June 8 in Baltimore, MD, and then for the rest of June ping-pongs back and forth between the Northeast and the mid-Altantic, New England and the Southeast. The bands head west to Boise, ID in mid-July and then following a few dates in the Northwest, play some shows in California before hitting the Lone Star State for a string of shows. The tour concludes in the latter half of August with shows throughout the Southwest in Nevada, Arizona, New Mexico, Colorado and Utah, and California.

To commemorate the start of Sounds of Summer 2017, Slightly Stoopid’s drummer Ryan Moran (Ry Mo) was kind enough to answer some questions for Rootfire readers before hitting the road.

RF: It’s been a couple of years since your latest release. Do you have a new album in the works?

Ry Mo: Yes. We have been working on some music and there are some real bangers set for the next record due out early next year. Good thing we tour as much as we do…

RF: As a lifelong Deadhead, I couldn’t believe it when you guys jammed with Bob Weir at his TRI Studios. Were you a big fan of The Dead already, or more just casually familiar with their music? Or not at all?

Ry Mo: Yes. I grew up in San Rafael, CA, where T.R.I. is located. I am a huge fan, have been since late 80s when my sister was listening to bootlegs constantly. Mickey’s stuff with Planet Drum has been a really big influence on me also. Being a drummer and percussionist, it was an early exposure to the fusion of musical styles from cultures around the world.

RF: Who would you consider to be your biggest musical influences when you started? Have your influences changed? Who are some of your favorite artists to listen to these days?

Ry Mo: Led Zeppelin and Aerosmith and MTV’s Headbangers Ball got me super inspired at a young age. I used to blast Zep and try to play along with Bonham. My influences have changed considerably as I’ve gotten older and wiser but I still love some good old classic rock. Some of my faves: too long to list, but The Police, DMB, The Dead, Pink Floyd, Radiohead, FISHBONE, Operation Ivy, Rancid, Pennywise, Don Carlos, The Marleys, Steel Pulse, Dead Kennedys, Descendents…more…

RF: Stoopid has really led the way with the growth of the Cali/surf roots scene. So many talented bands are appearing from all over the country. Are there any relatively unknown bands that you predict big things from?

Ry Mo: There are a ton of great bands that are doing great for themselves. I am happy for them. The fans will decide what is good to them. Good music and a good work ethic will prevail over bandwagon posers. I can’t really pinpoint one band, but the whole genre has gotten bigger and stronger through touring and performances.

RF: The very first Stoopid song I ever heard was “Collie-Man” off the Acoustic Roots album. I instantly loved it and to this day, it remains one of my favorite songs of all time. Do you guys have any inclination to do another album in a similar, scaled-down style?

Ry Mo: The T.R.I. sessions have some acoustic songs, and we have done “unplugged” performances at festivals and our own annual festival in Mexico, Closer to the Sun. As far as an acoustic studio album, we haven’t done that yet, but I am open to that.

RF: You guys are playing a lot of festivals this year, and one of them is Reggae on the River, the longest running American reggae festival that I’m aware of. While it’s always focused on more traditional Jamaican roots reggae and world-beat, in recent years they’ve seemed to open up to more of the Cali Roots scene. Have you played or attended the festival previously? Are there any artists performing this year that you are excited to meet for the first time?

Ry Mo: We played the festival back in 2003. It was my second or third gig with the band. Yeah the lineup for Reggae on the River looks fun. I’m excited to see as many of the bands as I can. We have toured or done shows with many of them —  Sly and Robbie, Stick Figure, Cherine Anderson, Ojo de Buey, Mystic Roots. I’d like to see Nkulee Dube, daughter of the late Lucky Dube, who I am a big fan of.

RF: What are some of your favorite cities and/or venues to play in, and why?

Ry Mo: As far as venues: Red Rocks, Reggae on the River, The Greek in Berkeley and L.A., Santa Barbara Bowl, and the big cities with crazy crowds: Chicago, NYC, Philly, Boston. All of these have great energy.

RF: How has life on the road changed for you guys over the years? I’m sure you get to be much more comfortable these days, but now that you’re a little older, how do you feel about time on the road? Do you enjoy it, or is it a necessary evil to earn a living?

Ry Mo: We are getting to be the old guys that won’t go away now… haha. Things are still pretty damn fun. We enjoy the road for sure, and we are trying to balance dad-hood with the chaos of tour life. We enjoy it, or we wouldn’t be doing it!

RF: How much improvisation will there be on the summer tour?

Ry Mo: There are some songs that are structured all the way from beginning to end, and others that have open sections where the horns, guitar, or keys can improvise. So there is a fair amount of improv even within a structure of a song.

RF: Are there certain songs that are your favorites to perform?

Ry Mo: Honestly, I enjoy the whole catalog. We try and vary the musical curve of the show, so it’s not one song for 2 hours, but there are peaks and valleys within. It makes the show more fun for the fans and us too. More of a roller coaster vibe…

Rootfire is giving away a pair of tickets to any show on the summer tour! Enter below.

Winner will be notified by email on Wednesday, June 7. See you this summer! 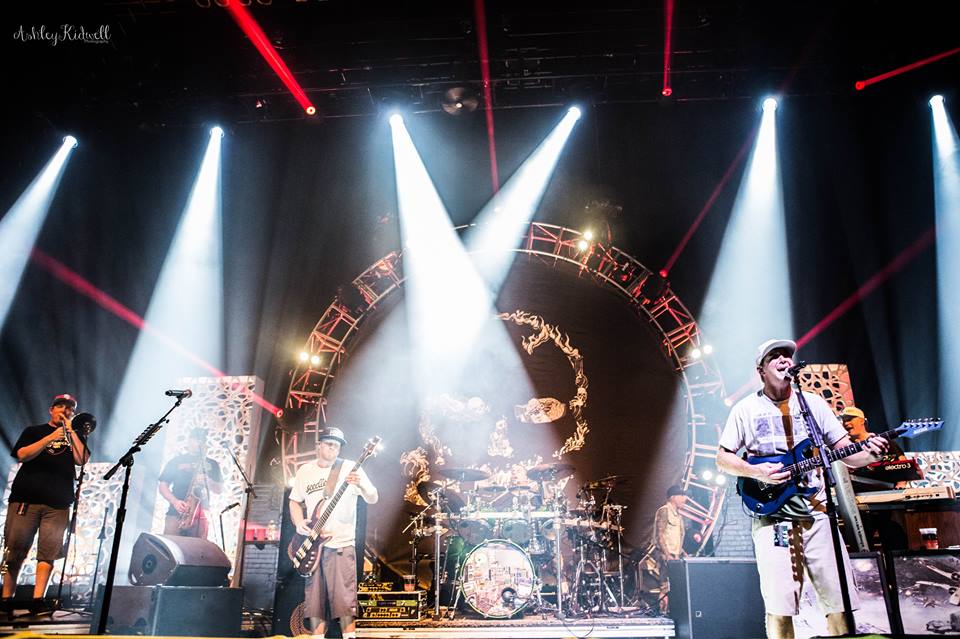 Through My Glasses: California Roots Music & Arts Festival →
wpDiscuz
We use cookies to ensure that we give you the best experience on our website. If you continue to use this site we will assume that you are happy with it.Ok