The streets were alive and buzzing. James Searl was spending the afternoon in the heat of the city searching for the kid from the photograph. Uneasiness had been building in his thoughts, a guilty feeling that stemmed from the fact that the kid had not been asked if the image of his face could be used for the cover of the album Searl’s band would soon release.

Perhaps the guilt was self-imposed – the cover art was done by the band’s friends and favorite street artists, brothers Icy and Sot. They had snapped a picture of the kid with his permission on their last trip to paint murals in Istanbul. Out of the thousands of shots taken, they decided to use his face creatively for the album artwork the band requested. Searl commented to the artists that the kid in the photo looked familiar to him, like pictures of his mother in her twenties, or maybe a bit like his daughter, while at the same time even looking a little like himself. Who was he? When Icy and Sot told Searl that it was a random kid on the streets of Istanbul, he was shocked. Searl was in Istanbul visiting family.

So Searl went to look for him. Istanbul has a population of 21 million people, and even though he went back to the neighborhood where the photograph had been taken, he knew that he might not find him. He knew that that the kid might never hear the music his face would represent, or know that his image would adorn an album being released on the other side of the world. That didn’t sit well with Searl.

He badly wanted to meet the boy, show him the artwork, and offer a token of appreciation for the use of his image.

He never found him.

The things that Searl perceives to be unjust haunt him, even if they are beyond his control. This nagging discomfort has compelled him to dedicate his life to creating and sharing music whose message offers guidance for making things better.

For many of us, this dilemma is not unfamiliar. It is a struggle we face each day: knowing what we know now, we feel burdened to fix the past, but deep within us we know all too well that the present is the time to fix the future.

The songs that Giant Panda Guerilla Dub Squad have written on the album Make It Better offer a bright spot amid dark times.

Anyone who knows the Squad personally knows that this anecdote only scratches the surface of the band’s deep commitment to contribute to a generation that builds a better tomorrow.

This album taps into something that relates to us all- music aside. How do you remind yourself to do your best, no matter what odds are against you? Whoever you are, and wherever you come from, how can you make it better? 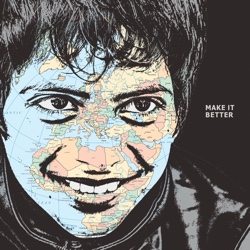 Listen to the first single off the album:

Rootfire At The Park – a music & lifestyle festival →
wpDiscuz