Pedal Power in The Emerald City

Nothing is cooler than self-powering your own musical entertainment. That is exactly what the crew over at Rock The Bike brings to reality for concert goers, music lovers, and anyone else looking to power up a PA using human energy and the science of cycle generated power.

Formed in Berkeley, CA in 2005, Rock The Bike is the brainchild of Paul Freedman, a.k.a. Fossil Fool. Collaboration and community are underlying values at RTB, and their connection to the extended network of musicians in the Bay Area has helped make pedal powered music available to performers looking for the greenest ways to present their music to new audiences. Rootfire is pleased to announce that artist Justin Ancheta & Soul Graffiti will be performing pedal powered sets between acts at Rootfire In The Emerald City, Saturday, July 29th in Seattle.

Attending the fest? We’ll be looking for pedalers!

Ancheta has been making waves internationally with his eclectic brand of reggae influenced funk and jazz. Touring the United States and Europe via bicycle and train, Ancheta backs up the conscious message of his music by taking direct action to improve the global music community. The Justin Ancheta Band has played across the world from Oahu’s Hawaii Spirit Festival, to MannaFest in Grass Valley, to Barcelona’s debut Bicycle Music Festival, performing with The Wailers, Joan Baez, Creedence Clearwater Survival, and Charles Neville. Rootfire had a chance to catch up with Justin about his upcoming appearance at Rootfire In The Emerald City. 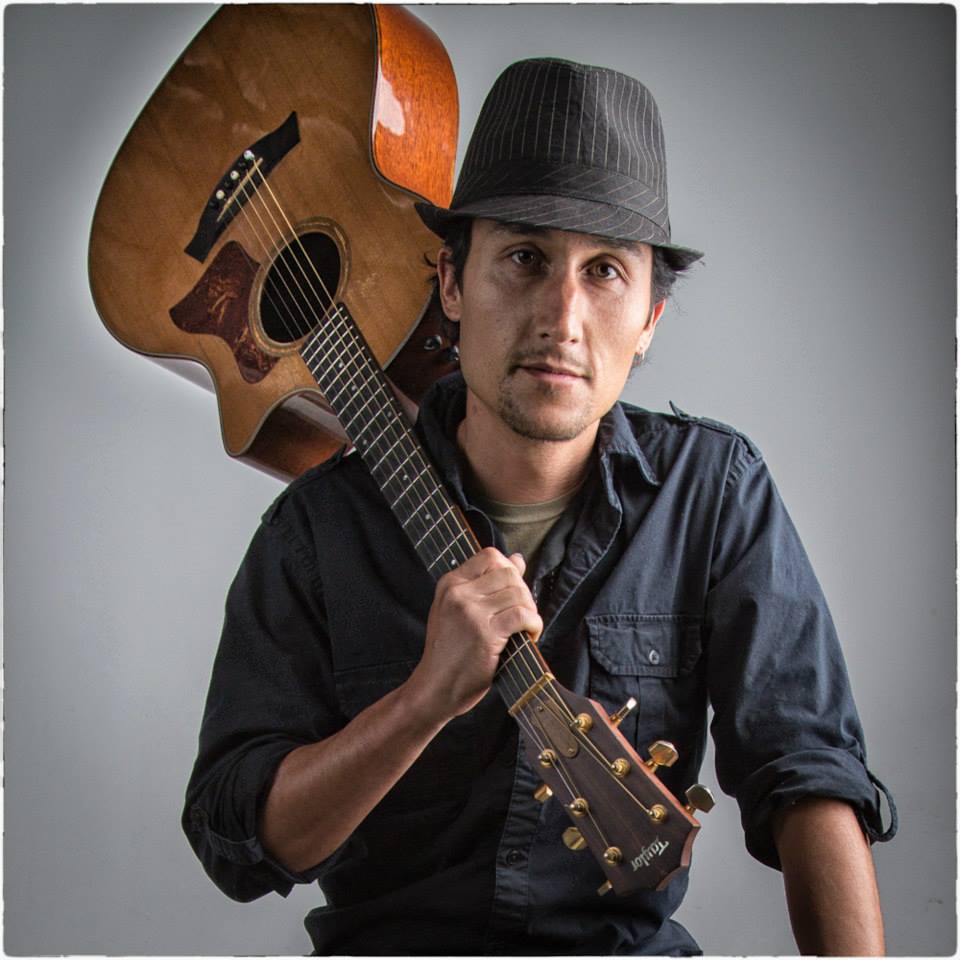 Justin Ancheta: I started Soul Graffiti Productions 12 years ago with a dream to have an artist-for-artist collective label. In the past 3.5 years, I was able to find Rock The Bike’s new home on San Pablo for Paul, friend and owner of Rock The Bike, and he offered the upstairs rental in gratitude for finding the space for his business expansion. A bit before then, and more so after, I have been working on event production for both pedal powered and non-pedal powered events from that location. Soul Graffiti often partners with Rock The Bike to produce amazing entertainment and pedal power for festivals, organizations and companies. The first successful partnership happened in 2011 when Soul Graffiti took on the pedal power offering at Maker Faire, San Mateo, CA. It was the first and only year so far that the pedal powered stage got 7 of 7 first place prizes. Since then, Soul Graffiti has been producing events for Rock The Bike, including Pedalfest, Maker Faire, and a handful of other national events. We now have the first pedal powered studio in the world. You can check us out at: www.soulgraffiti.info

RF: Both conceptually and aesthetically pedal power has a lot of pleasing elements for performer and audience alike. In your experience, what are some ways pedal power empowers the participants?

JA: I think it gets people moving, literally and creatively. People start thinking about how much energy it takes to put on a rock concert, or consider how much energy different appliances take in power. It’s educational, fun, and engages people to hopefully get on bikes more and try it for a local transportation method. This is how I got involved with bikes myself. I was the first performer at the first Bicycle Music Festival in San Francisco. Since then I have ridden bikes throughout the world–the United States, France, Spain, Hawaii– putting on pedal powered shows. I know bikes won’t save the world, but it is the most hands-on way I’ve been involved in revolution in my life. People can work on their own mode of transportation easily, fixing parts with little skills needed, and you get in shape going to the places you need to go. Imagine gyms having energy from their bikes harnessed for their lighting consumption in the gym. It’s a model for where we can be with technology and human civilization. I’m tired of being a parasite race on the world; I’m ready to make the necessary changes to work toward a sustainable future, and pedal power is a great gateway. It’s a mind-opening experience.

RF: Climate change is a pinnacle crux of our lifetime. Art and music have always provided a platform for cultural commentary, and it seems that more and more people are looking for ways to walk the walk of a sustainable lifestyle. What’s your advice for artists and musicians who are looking for ways to incorporate greener choices into the day-to-day workflow of their craft?

JA: I’d say try alternative transportation tours–bikes, trains, etc. Try doing some pedal powered events and engage your audience to power your entire show off-grid. I’m an avid believer in the music carrying a show and harnessing the power of community, but combine that with good, clean pedal power, and you will have a revolution every time you play a show.

RF: There is a great sense of community surrounding the Rock the Bike movement. Where can people find out about bands and venues that are using pedal power?

JA: There are still very few doing pedal power worldwide, in comparison to the amount of music and bands out there. However, some spots to look have been Bicycle Music Festivals that pop up world-wide, thanks to the ethos of Gabe Dominguez and Paul Freedman, Co-Producers of the first festival. Since then, we’ve seen Biketopia Music Collective pop up, and the Pleasant Revolution doing pedal power throughout many countries. Other organizations are starting to pick it up and ask for their own system to do off-grid shows. There has been talk about organizing a community hub. I haven’t seen one exactly that encompasses us all, so I just made this group for interested folk. Please share if you want to get involved.

RF: Super pumped to catch you later this month at Rootfire In The Emerald City. What can you tell us about the music you’ll be playing there?

JA: I’ve been doing live looping and DJ’ing since the early 2000’s, before most people did it. I now include some DJ technology to the mix with live instrumentation. The style of music is hard to put down, as I’m from a mix of musical backgrounds, similar to my cultural and ethnic background. I guess you could say: Reggae-Rock-Flamenco-Infused-Jazz-with some world funk-hop included.

RF: And finally, are we going to be seeing massive summer music festivals powered by cyclists? What’s the big picture for the future of pedal powered music?

JA: I like the quote from Margaret Thatcher: “never doubt that a small group of thoughtful, committed citizens can change the world; indeed, it’s the only thing that ever has.” I believe pedal power has a capacity to still grow a bit more with line-delay speakers reaching audiences upwards of 50,000. That being said, I think the most special moments are around a campfire with an intimate group of people, or a smaller-sized show where everyone’s collective energy hits the same chord. Pedal powered shows have an opportunity to create pockets of community and connection where society has seemed to falter. Some of us have dreams of making larger shows where pedal power can reach more of the masses. My dream is to create smaller shows throughout the world that revolutionize the meaning and the power of the individual, or the community that empower the individuals. I’d personally like to make a festival with about 5,000+ people with many smaller stages that allow the intimacy and engagement of the music to be fully downloaded into our subconscious as we recreate our vocabulary of cultural connection by making sounds together.

Ancheta will be performing through the patented “One Bike-One Speaker” system, but Pedal Power is capable of so much more. Check out their Fender Blender, Recharge Station, sLEDgehammer, El Arbol: The Bike Tree….there’s even a fully pedal powered stage.  It’s cooler than words can do justice and we can’t wait to give you a taste of things on July 29.

See you in The Emerald City! 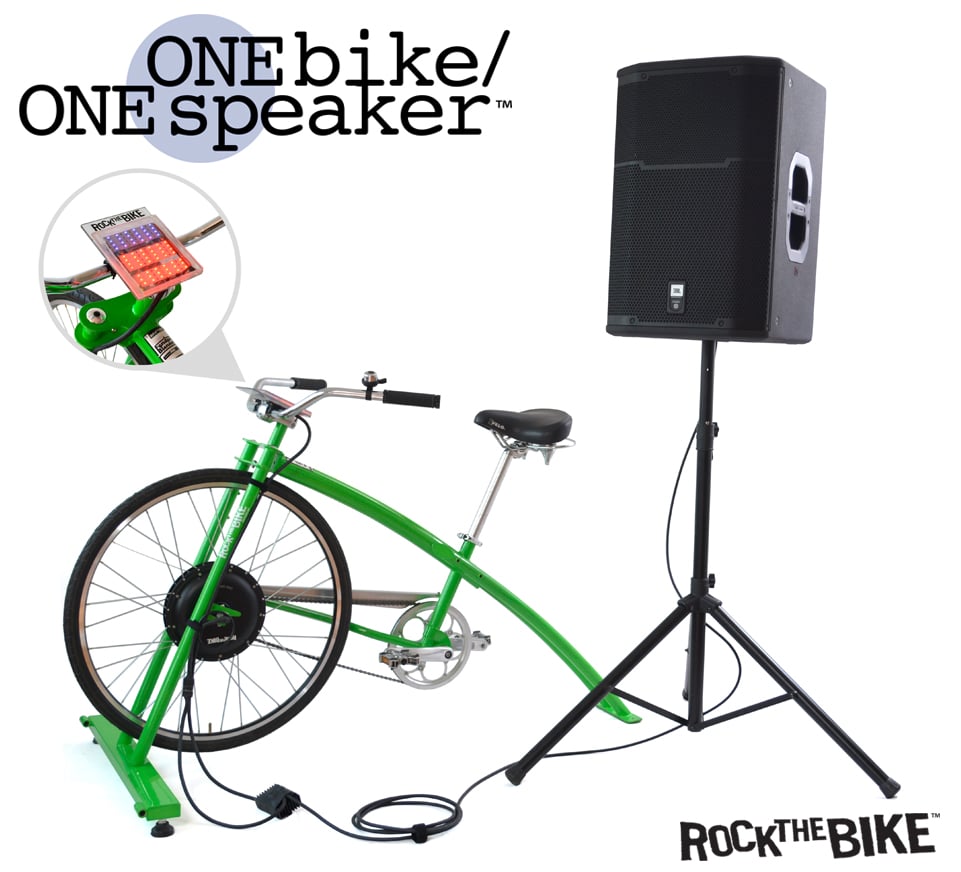 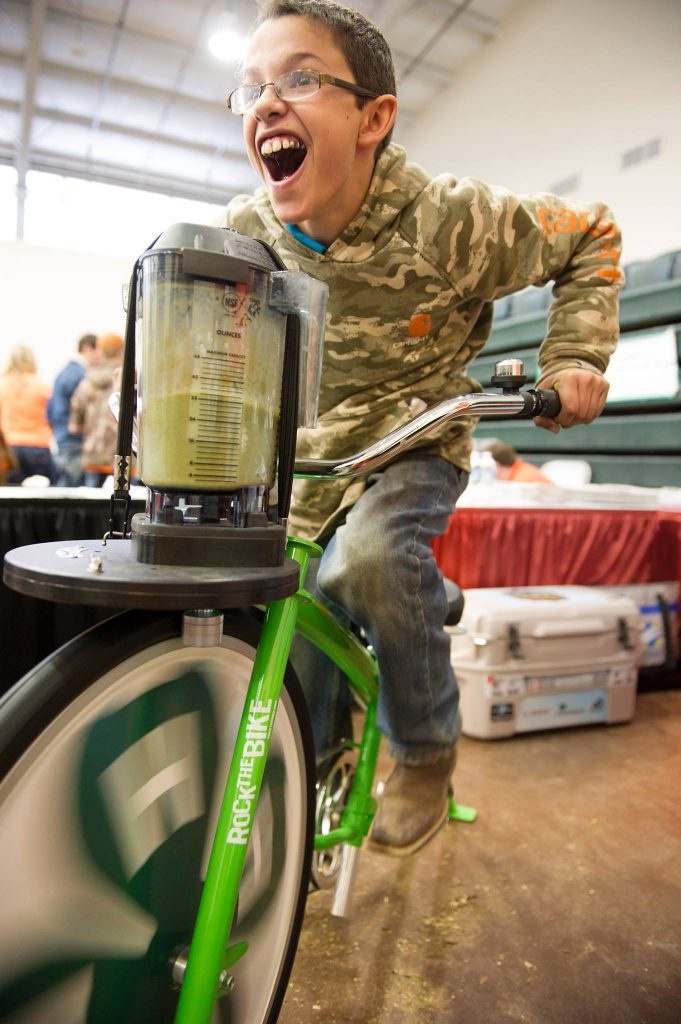 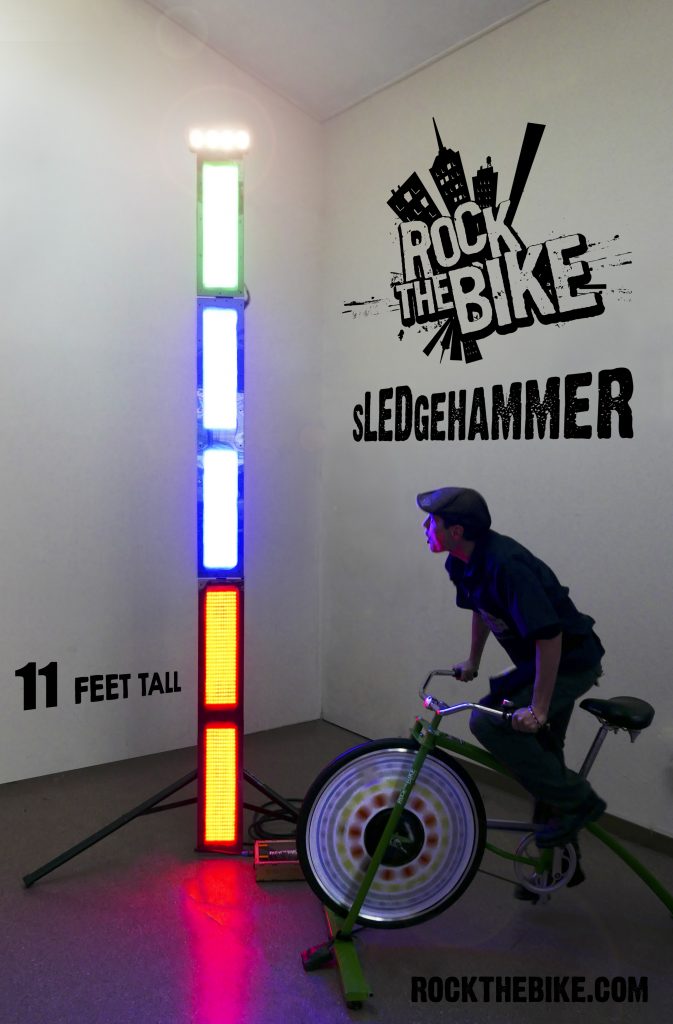 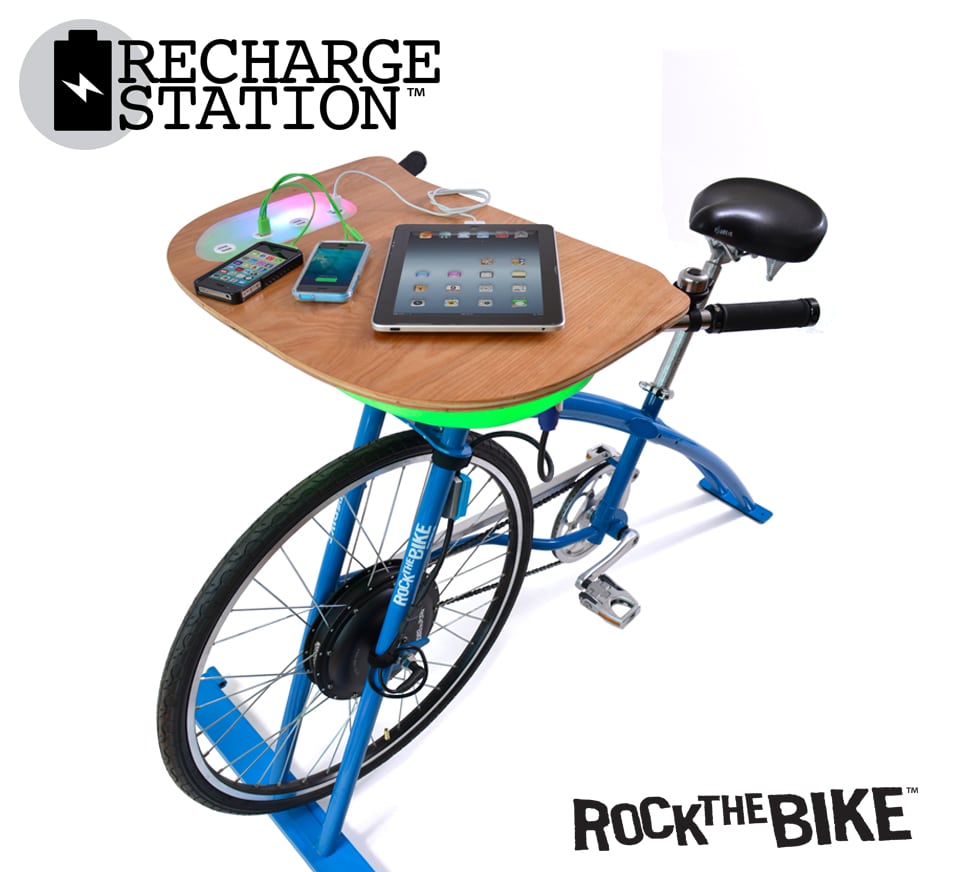 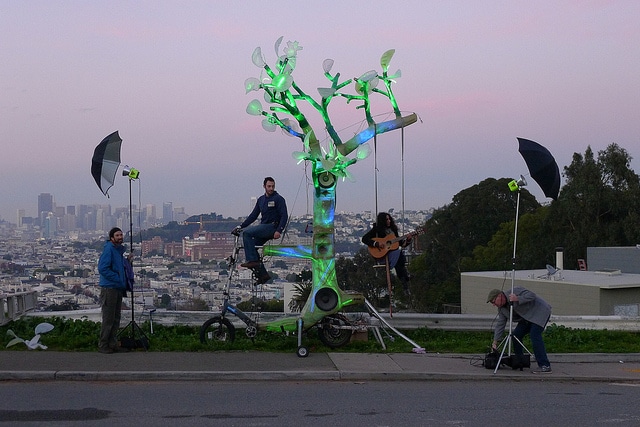 Interview: Eric Hilton of Thievery Corporation →
wpDiscuz
We use cookies to ensure that we give you the best experience on our website. If you continue to use this site we will assume that you are happy with it.Ok