Ithaca Reggae Fest is being billed as “a dedication to the protection of Cayuga Lake through a vibrant celebration of Ithaca’s legendary reggae community and history.” It’s an intriguing mission statement, and having a personal interest and love for the history of reggae music and Ithaca. NY, I am naturally invested in what this festival is going to represent.

Clearly those hosting the Ithaca Reggae Fest are not simply about throwing festival money at the issues concerning Cayuga Lake. The festival is $10 in advance/$15 at the gate. There are seven world-class reggae bands playing who are all regional powerhouses. The tickets for these bands by themselves at any given venue would be at least as much. It is curiously affordable. They want you to come be part of the experience. That is part of the intention.

A greater need is being addressed. It comes embedded in the roots of reggae history, to Stewart Park on June 24, 2017. A message. A coming together. A centralization of awareness of the time and space of a community.

Ithaca is the source of legends. I played my first reggae gig there. I moved to Ithaca because of the famed music scene. Only until after living there did I become aware that it was a REGGAE music scene. Seeing John Brown’s Body in 2001 motivated me to dive deep into the reggae aesthetic. I found Ithaca to be aflame with authenticity. Monks of many kinds traversed the town, studying, focusing, and collaborating on sonic and philosophic reasonings.

To me, ITHACA IS REGGAE – though lacking the clever pun, the statement is accurate enough to warrant a new version of the iconic ITHACA IS GORGES t-shirt. A small town in central New York, Ithaca brings about smiles internationally when mentioned.

On a trip to Ghana in 2002, I was fortunate enough to be invited to the studio of Ghanaian Reggae King Rocky Dawuni. When I mentioned that I was visiting from Ithaca he gave me a strong hug, a big smile, and told me to pass it on to Kevin Kinsella. Kevin is the founder of John Brown’s Body, the band from Ithaca that changed my life. I feel comfortable referring to Kevin as a, if not THE Godfather of the Ithaca reggae community as I have known it. Gratefully, he is now also a friend and one of the visionaries of the Ithaca Reggae Fest.

My band Giant Panda Guerilla Dub Squad has been the focus of my life since performing in Ithaca. Everyone I know, everything I see, everywhere I go, has been filtered through the Ithaca reggae effect. 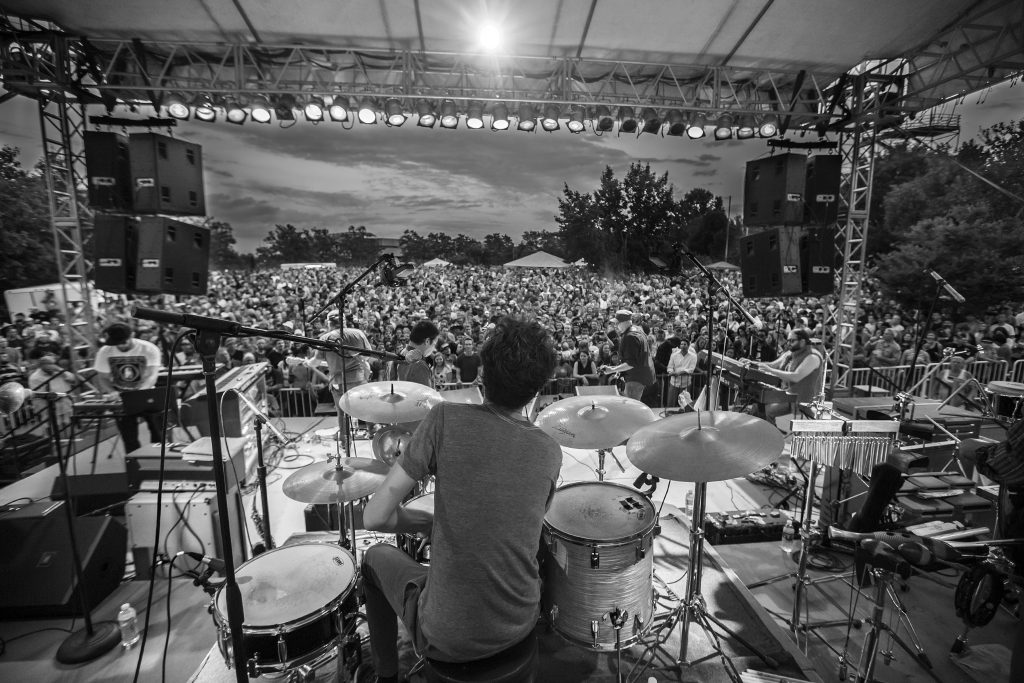 Ten years after performing my first reggae show, I was standing in line at the very same legendary venue Castaways. It was a Sunday in 2012. They were hosting their last show ever. Some mumbo jumbo had happened with the city, and despite a great reputation of providing space for live music in the area, it was being torn down. It has been reopened since, under the moniker “The Dock,” but at the time the future was unknown. It felt like the end of an era for me personally.

John Brown’s Body was the band closing the place down in proper Ithaca fashion. Despite being beat, having just returned from a long tour, I texted my friend and musical hero Elliot Martin, the lead singer, who graciously put me on the guest list plus one for the sure to be sold out throw down. I felt proud that I could make that phone call, like I had earned it. I loved this scene and this music. I loved the freshness of it all. It was rare and unique. I looked forward to collecting this one night of history. A memory maker.

It was raining. Standing in line, an electric-eyed gentleman approached me and asked if there was any chance that I would happen to have an extra ticket to the obviously sold out event. In this rare situation, I was able to give him a smile, and tell him, “yes, out of this entire line of people standing in the rain, I happen to have that one ticket that is going to get you inside good sir.” He was shocked and immediately grateful. We both deemed it meant to be.

As we waited for the line to get moving we got to talking. I was pleased to meet Michael Mazza. He was an Ithaca local and had been seeing JBB since he was a kid. They had turned him on to reggae music. I remember that my love for the community was affirmed by his. I’ve always respected that Ithaca reggae sets the bar high, in regards to community, clarity, and quality. Michael Mazza gave off an energy that reflected that. A like mind.

When I called looking for information about the intentions of the Ithaca Reggae Fest from its curators, I was pleasantly not-surprised to find Mazza on the other line. The significance was not lost on me that he had been my plus one so many years ago. The show had been slamming. It had been everything I wanted it to be. Reflecting on that with Michael reminded me that I was speaking to someone who knew and cared about the Reggae legacy of Ithaca, NY, and the responsibility that comes with being a part of it.

In a time when mass activism is still not catching up to the deadly fires of exploitation, corruption, and collusion that burn us as a populace, I am always interested in the specifics of community-based organizational strategies that revolve around music and festivals. Reconnecting with Mazza via him turning up the volume on Ithaca Reggae was a delight. I was inspired to hear of the local coalition politics of necessity that were being manifested as a result of this festivals creation.

Michael Mazza and Kevin Kinsella have been building for a long time as friends about the need for an Ithaca Reggae Fest. They knew that it couldn’t just be a local festival for festival’s sake. There must be a connected cause greater than the one day. Not saving the ENTIRE world, but something realistic and relevant. Reggae provides lessons from the past to move us forward in the future and the festival should reflect that. They were aware that the event must make a mission to manifest good energy locally and recycle the blessings that had been bestowed unto them from the area. 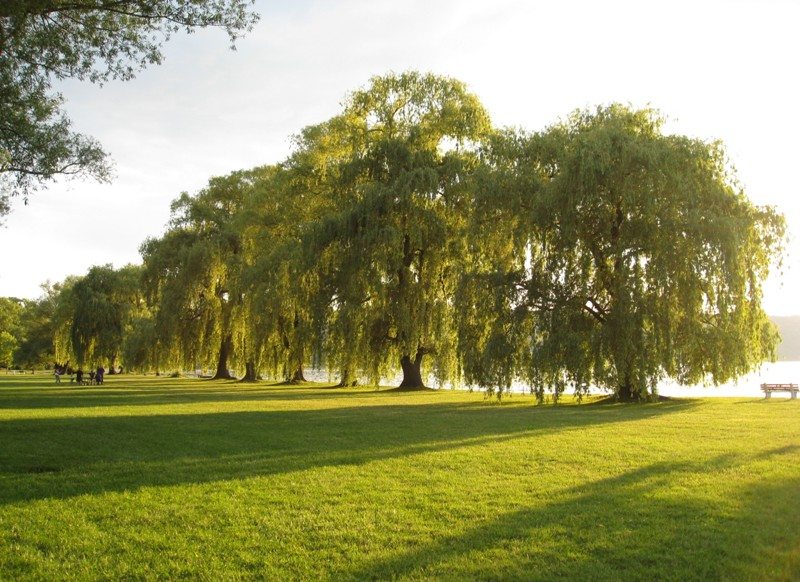 Michael and Kevin began to survey the community for inspiration. Local movements, particularly the New Roots Charter School’s floating classroom and wetlands sustainability project, inspired Mazza and gave him direction to connect with a coalition of local causes centered around the health of Cayuga Lake.

Together, Michael and Kevin began to attend events like the Cayuga Lake Science Symposium at the New Roots Charter School, in affiliation with indigenous groups like the Cayuga Nation, and the Cayuga Lake Water Protectors. Coalitions of Indigenous groups, locals farmers, scientists, and activists were meeting and sharing ideas to strengthen the communities body of knowledge about the threats facing the ecosystem that has made the Ithaca area so bountiful for generations.

Michael and Kevin both realized how little they knew about these networks and their efforts. There is a lot to know. This is precisely why coalitions of friends and experts are critical in these times. Mazza reflected to me that he feels our generation, in particular, seems to just think “somebody else is on it.” Everyone wants to feel that some smart qualified group of experts is going after every issue we all hear about, but few of us know the actual, local details of who, what, and how the problem is being addressed.

The experts made it clear to Kevin and to Michael, who attended these meetings as the Friends of Cayuga Lake, that awareness of the issues by the public was the #1 problem that needed attention. Chief Sam of the Cayuga Nation stressed the principle of seven-generation sustainability, which is to live and work for the benefit of the seventh generation into the future. With that practice in action, how could we ever imagine destroying the earth that keeps us?

As a member of the community for four generations, Michael took this to heart. This is the intention of the Ithaca Reggae Fest: to use the antenna of reggae to broadcast awareness about the vitality of Cayuga Lake to the community that it supports. This includes the threats that face it alongside the practices that can manifest sustainability and allow the ecosystem to thrive.

They are working with local sponsors, environmental groups, and artists. There will be morning prayers and Yoga, delicious food, family friendly activities, beautiful people, music, and DJ’s all day. The party will carry on over to The Haunt, where Jay Sokoloff will host the Crucial Reggae Social Club into the night. Sokoloff is the third partner and primary sponsor of the Ithaca Reggae Fest and generously helping to make sure that the festival can be cheap for attendees and be an annual event.

So please people near and far, celebrate and support the uniqueness of this beautiful scene that is local to us but globally mesmerizing. Take a taste of the sounds inspired by Cayuga Lake and the Ithaca Community. Manifest the beauty and care of the future. 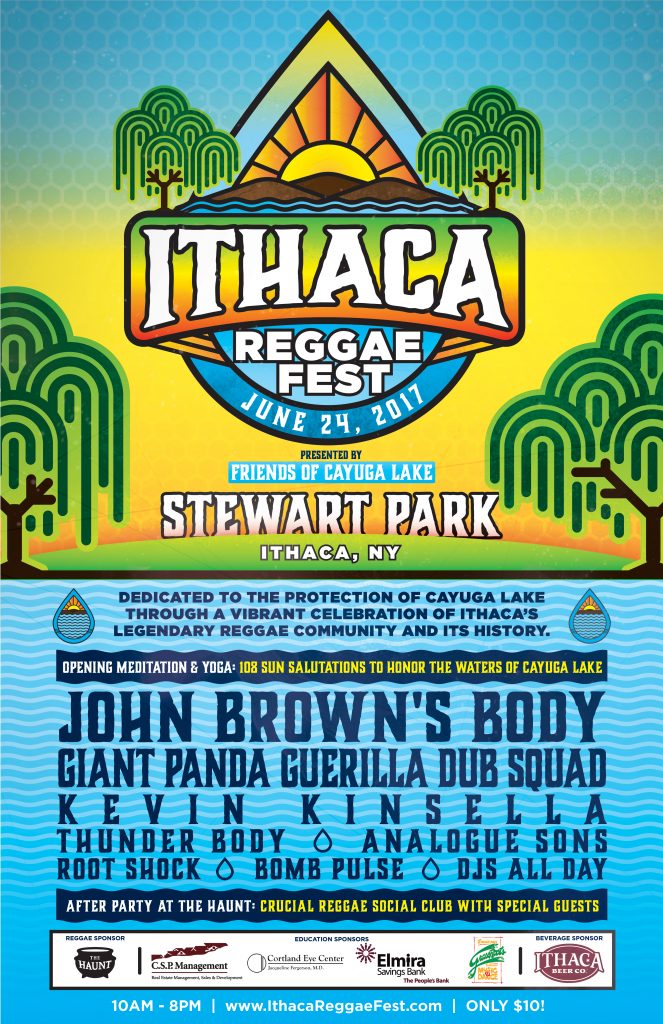 Catching up with Ry Mo of Slightly Stoopid →
wpDiscuz
We use cookies to ensure that we give you the best experience on our website. If you continue to use this site we will assume that you are happy with it.Ok