In the middle of summer 2021, Zion I Kings came through striking hot with the release of the “Mash Down Riddim” to the masses. Forever honoring the legacy of His Excellency Haile Selassie I, “Mash Down Riddim” is the 9th riddim to come from this heavy modern reggae production team/trio in a riddim series. It features a myriad of voices considered to be crown jewels of our time in roots reggae. “Mash Down Riddim” finds Akae Beka, Pressure, Lutan Fyah, Clatta Bumboo, The Movement, Medisun, Lloyd Brown, Messenjah Selah, Ras Teo, and of course the original artist Blakkamoore – all chanting over the scorching sound of Blakkamoore’s “Mash Down Georgetown” which was first featured on the phenomenal full length record “Upward Spiral” in May 2020. In this day, we have the pleasure of hearing the brilliance of Satta Sound, straight outta Warren VT, spinning up a massive mixdown of the “Mash Down Riddim” into a streaming, non-stop back-to-back captivating 22 minute segment, featuring all artists juggling the sound from one to another. While the original “Mash Down Georgetown” reasons and gives tribute to Blakkamoore’s home country of Guyana, the “Mash Down Riddim” provides a platform to let other artists illuminate on a host of diverse subjects delving into themes as near and far as the pandemic, ganja, the likeness of H.I.M, as well as the benefits of simply slowing down. This is the power of the riddim format. It serves as a dissection and explosion all at once. Satta Sound’s DJ style mixdown provides the opportunity to glorify certain aspects of the original riddim – all the while creating new songs and hooks for the books, magically displaying just how much creativity can spawn from a bass line and a beat.

“Mash Down Riddim” makes the possibilities seem infinite and Satta Sound keeps the dance moving and the ideas flowing. The art of “juggling” over a “riddim segment” is classic in the foundation of Jamaican and West Indian music. It’s a lotus flower fractal of energy that lets the listener, dancer, and artist coalesce a spiral of perspectives into a collective experience, all inna one sound.

Recently, we saw Collie Buddz collaborate with many other contemporary acts on the Cali Roots Riddim 1 & 2. I can’t tell you how many different comments I saw on social media from newly devoted reggae listeners trying to make sense of why they were hearing so many different songs by their favorite artists all over the same beat. There seemed to be little context for many in the new US scene to overstand the concept of the “Riddim.” No judgement coming from this corner though, as we all enter into this at different points and ports. It’s all a matter of education, explanation, and sharing. Each one teach one so they say.

Rootfire was grateful to reason with Zion I Kings producer Andrew “Moon” Bain, to get some clarity and context of where the riddim concept comes from, how a producer goes about constructing it, and what the motivations and objectives for such a project are all about. Giving thanks to Moon for the insight and time taken to discuss this exciting new music. 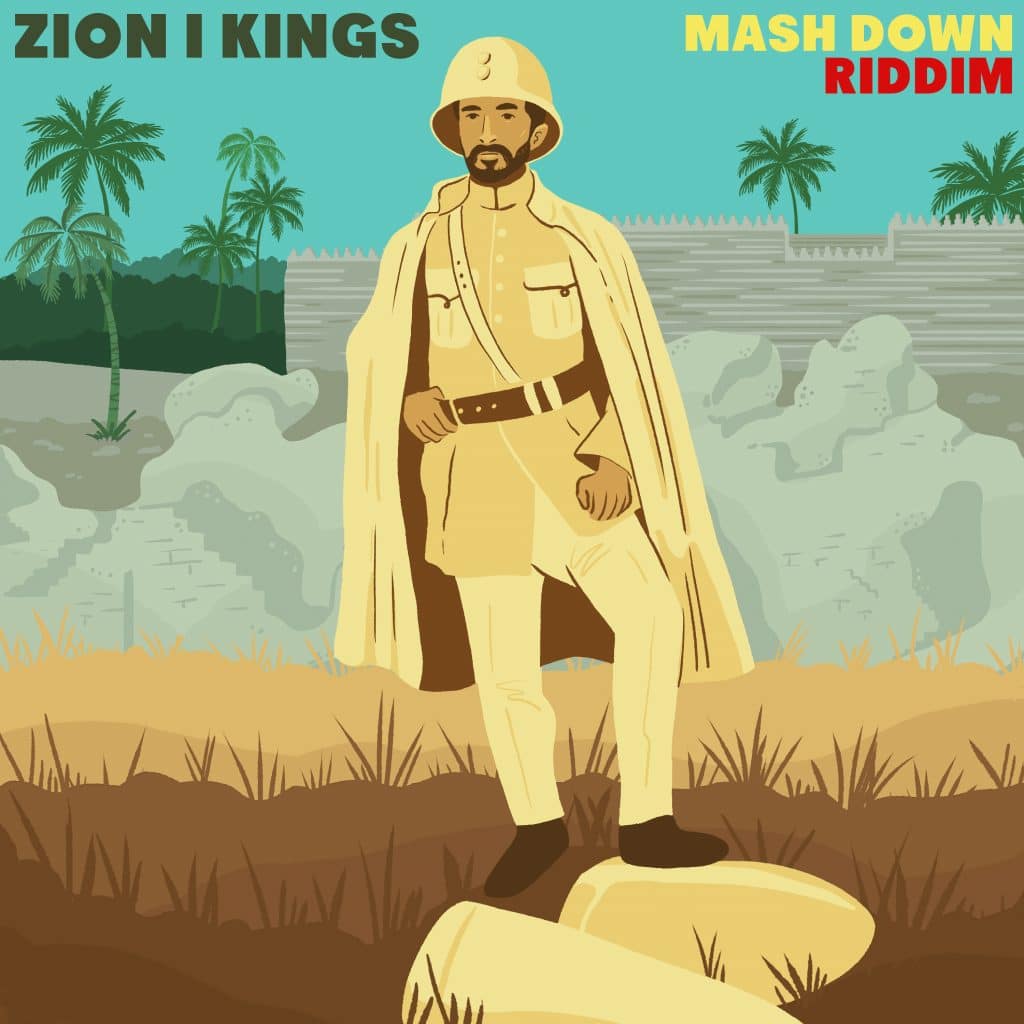 Rootfire: What is your connection to Satta Sound?

Andrew “Moon” Bain: I first linked with Satta Sound through Rise Up festival in VT around 2007. I was working with a Brooklyn based band, Noble Society that was fronted by Jahdan Blakkamoore, at that time. We went up to Vermont for the festival to perform, I met Mathew and we kept the link from that time. Satta Sound has been a big supporter of Lustre Kings and Zion I Kings works over the years and we have become family through the music.

Rootfire: What are some terms or the language that mainstream folks might not know when it comes to describing a riddim or discussing what it is to folks?

Andrew “Moon” Bain: Well, we call this type of release a “juggling” or “riddim segment.” It is one of the ways I first got into producing reggae music actually. It is basically one composition/track or “riddim” that hosts different artists’ songs or “takes” on the same composition. Then, in the dance or on radio, a DJ will play a few of their favorite cuts off the riddim in a continuous flow. So for about 10-20 min you will hear the same music play but different songs sung over it. For some years, the first records on Lustre Kings were released solely on 7″ records or 45rpm vinyls, shipped internationally out of Jamaica.

Rootfire:  Who designed the artwork of H.I.M and what was the inspiration behind the style? I love the way you have worked in each artist’s image into the YouTube video.

Andrew “Moon” Bain: I designed the image in photoshop and then had artist Lidia López create the artwork. I wanted to share the image of the King, triumphant, stepping on the bomb. It is a classic photo and seemed fitting for the “Mash Down” riddim! Lidia’s style is clean, graphic, relatable and has a silk screen quality to it that I dig. I knew her style would also translate well to individual artist profiles within the theme. I’m really pleased with how it all came together. Simple, criss and clean.

Rootfire: What kind of foresight goes into curating a riddim?

Andrew “Moon” Bain: There are a couple ways to approach it. As a producer, you may naturally hear who would work with the track well. Then there is the factor of who is within reach to approach. Lastly, who is inspired by the music and has the willingness to be creative with it.

Rootfire:  How do you select the order of singers and how the riddim changes as the mix continues?

Andrew “Moon” Bain:I usually prioritize what I feel are “big,” pertinent or important songs. Often you want to put a more known artist near the top or what you may feel is a strong song to give it a highlight. Because it can be monotonous when mixing the same composition, for each song, I try to keep the artist list long enough to be a significant project but low enough that it isn’t boring or each song will get lost. I’ve learned that through experience over the years. Way back when, we did all 20 songs on a riddim and it was just too much. Not only for the mixing engineer but also for the artists and listeners. To that effect, when I get down to final production and mixing, there are usually some songs that do not make it to the final round. Then it is easier to approach each song as if it were a single. Think about what overdubs may fit the specific tune, not just what worked for the music composition. That is where it gets to be a lot of fun in the studio…making each song stand strong on its own and come alive within the framework of the one composition.

Rootfire: How do you select the singers?

Andrew “Moon” Bain: Again, it really comes down to who is inspired, willing and available and of course budget, depending on who you are approaching. The main thing is inspiration. If the artist is inspired and finds a place to express themselves, it is irie. However, often you may play it for an artist you think will be awesome on the track but they don’t catch a vibe for it. That is just music.

Rootfire: What is the objective?

Andrew “Moon” Bain: The main objective is to create a platform to glorify the King of Kings and also allow artists to express themselves lyrically, melodically, consciously and spiritually. The riddim segment is a tradition in reggae that a lot of the younger artists have shied away from in the last few years. InI used to release a good amount of riddims. starting on 7″ records out of Jamaicas throughout the mid-late 90’s and early 2000’s but the newer generation of reggae artists were not as keen to take part in this style of release. As studios moved from big settings to being able to make a record in our bedroom, I think the landscape just shifted as the industry has. It used to be a solid way to get your voice out there, be discovered and heard for the first time but that has become much easier for an upcoming artist. Nuff artists bust off a jugglin’! The riddim release has been an integral and unique part of Jamaican reggae and dancehall music. I have been thankful and pleasantly surprised at the response to this latest one (volume 9) in the Zion I Kings riddim series.

Here at Rootfire we love getting down to a nice mix. Enjoy yall’s selves for the rest of the summer. Stay safe healthy and hydrated and get down to the Mash Down by any means necessary. Big up Zion I Kings. Follow them and support their catalogue old and new. It’s forever giving.