Colorado roots outfit Policulture releases their upcoming album Mountains to Cross in its entirety August 17. Today, Rootfire premieres “Karma,” the first single from this full-length. With themes revolving around perseverance and persistence, this latest offering from the mountain reggae collective lives true to these values in the flesh, raising over $11K via their sustainable album release campaign.

Keeping a heavy focus on eco-awareness, Policulture forges the symbiotic relationship between band, environment and a socially conscious ways of life. Below is a narrative from Policulture saxophonist Kyle Jerome about life as a musician and the beauty of making an album with his cousin, producer and musician Matt Goodwin.

Returning to Boulder, Colorado after a 9-day marathon of recording  in Rochester, NY under the direction of my cousin and unsung hero Matt Goodwin has given me reason to reflect deeply about the bizarre timeline of events that have placed me on the path I am on today as a horn player and singer for a blossoming American Reggae band coming out of Colorado.

As a regular touring member of many internationally known reggae bands (many that have grown to be some of my all-time favorites in the scene) Matt has exposed me to the world of reggae, which has led me to some of the greatest opportunities and accomplishments in my life. Having Matt at the helm of engineering my band Policulture’s upcoming album couldn’t have been drawn up better in a story book. Add to the tale recording this album in Rochester, a region where my mother and half of my family comes from, and the story becomes a true demonstration of a predetermined path of interconnected events beyond human power or control. The path of destiny.

Matt Goodwin, “The Bo Jackson of Reggae” (Reid Foster, GM of Rootfire) is an immensely talented individual involved in so many projects it would make your head spin trying to keep track. Born in Naples, NY, Matt is a composer, record producer and engineer best known for his contributions within the American reggae scene, having engineered/performed on five albums that debuted #1 on the Billboard and iTunes Reggae Charts. From 2006-2012, Matt performed as the keyboardist for internationally acclaimed Boston/Ithaca based future roots reggae band John Brown’s Body. Matt continues to work as a freelance musician, producer, composer, and engineer with his company Riot City Sound. He is currently working out of the historic Black Dog Studios (where Metallica recorded their debut album Kill ‘Em All) in downtown Rochester. He regularly performs with bands such as The Easy Star All Stars, Giant Panda Guerilla Dub Squad, and The Movement, to name a few.

In June of 2000, at the age of 9, I can distinctly remember being in Naples at a high school graduation party and feeling the music ignite a fire in my heart. Goodwin was playing in his band at the time Mountain Mojo Authority (MMA), jamming tunes to a rowdy crowd of teenagers bouncing and swaying to the rhythm and bass. Watching my cousin perform up there next to his best friends, bringing conscious vibes, crazy talent, and pure musical energy was more than enough to hook me. The dozens of “cool” older kids and good-looking ladies swaying their hips might have sparked my interest too, but I’d like to think that 9-year-old me was strictly about the music that day.

By the fall of 2006 I had already been playing saxophone for 3 years, annoying my parents with a developing tone full of squeaks and squeals. I caught word that my cousin Matt had recently joined a prominent nationally touring reggae band called John Brown’s Body. I had never heard of this band before, but little did I know they were to become my all-time favorite.

I quickly acquired CDs of the bands’ two recent releases at the time, Pressure Points and Spirits All Around Us. Once I started listening to these albums I couldn’t stop. They were on constant repeat via my Discman walking to school, at lunchtime, during passing periods, before bed…the music was pulsing through my veins. I memorized the horn lines and stayed up late trying to decipher the meaning of the lyrics of Elliot Martin.

My good friend Max was growing dreadlocks at the time and exposing me to the sounds of Bob Marley, Peter Tosh, Sugar Minott, Dennis Brown, The Mighty Diamonds and so many more. Other than Max, I didn’t know any other person my age who was as captivated and deeply entranced by this music. I was so stoked to tell him about the new band my cousin was touring with.

When JBB finally came through Denver, Matt came over to my parent’s house for dinner and brought his childhood friend from Naples and JBB tour manager at the time, Seth Herman (Rootfire founder). I hadn’t met Seth until that day, but I knew as soon as he rolled up on his motorcycle with his wild unkempt hair and asked if I wanted to kick a soccer ball around in the backyard that he was a good dude. I expressed to him my interest in dub, and he told me to check out Giant Panda Guerilla Dub Squad, 10 ft. Ganja Plant, Midnite, and The Guvna Dub Sessions.

That particular night was a school night and I was too young to get into the club JBB was playing at. I think my parents were also looking forward to a date night without their teenage son, so I stayed at home while they went to see JBB rock The Bluebird Theater.

By the early spring of 2010 I was nearing graduation from high school and had become very familiar with the music of Giant Panda and JBB. This time my cousin came through Denver the bill was stacked. Panda to start the night followed by The Black Seeds all the way from New Zealand with JBB to headline. This show was absolute fire, and it was this night that I met James Searl, the bass player for Panda (who I later found out played in Mountain Mojo Authority at that graduation party I had been at in Naples 10 years earlier). This night Giant Panda also became an equal favorite to JBB for me.

Fast forward to the fall of 2011 as I was entering my second year of college at the University of Colorado in Boulder. I continued to hone my saxophone skills and explore other genres of music like funk, soul and jazz, but reggae, and East Coast upstate NY reggae in particular, continued to be my modus operandi. I sported my JBB and 10ft shirts often in class and jammed reggae out of my portable speakers on Norlin Quad of the CU campus. One day, leaving an Environmental Policy class, a wiry kid with long hair and a Zildjian shirt looked at me and my own shirt with disbelief, saying “you know Giant Panda Guerilla Dub Squad?!” After conversing with the guy and learning about a band he played drums in, I was invited over for a jam session. After one jam with this group of guys that called themselves Policulture, I was beside myself with excitement to find myself involved in a reggae group in my own town.

Over the next 5 years our sound grew and we had the opportunity to play some of Colorado’s finest venues, including Boulder’s Fox Theater, Denver’s  Bluebird Theater, and countless performances at Aspen’s Belly Up, including a sold-out show supporting the world-renowned Jimmy Cliff. We shared the stage with acts like Groundation, The Green, Rebelution, The Expanders, Toots and the Maytals, The Wailers and so many more.

Despite achieving so much with Policulture, I didn’t know if what we were doing would continue to fulfill me, and my future became uncertain as a member of the band. Towards the end of 2016 I decided I needed to travel, to pursue other endeavors, and to move to the next chapter of my life. I went to Australia to volunteer on an organic farm and returned after nearly two months ready to start a career-oriented job. Upon returning from Australia I was in a very confused and uncomfortable place with my life, living back with my parents in my mid-twenties, healing from a turbulent long-term relationship, and searching for a job that I felt obligated to achieve.

One afternoon I received a call from my cousin Matt telling me he was coming to town to perform with Giant Panda and asking me if I’d be interested in going on a 5 day run through Colorado to play Sax alongside him and Giant Panda. My excitement level was, simply put, beyond anything I had ever experienced before. To perform on stage with a family member and some of my greatest musical idols would prove to be a life-changing experience. Coming out of this period of personal questioning, this opportunity reaffirmed that no matter where I thought I wanted to go or what I wanted to change, that music, and particularly the east coast reggae music that I knew and loved, would never leave me.

Since this Colorado run with Panda, my group Policulture has worked hard over the last year to compose an album’s worth of new music, culminating in a trip to Black Dog Recording Studios in Rochester, NY to cut a record. Experiencing nine back-to-back 12-15 hour days was truly the pinnacle of all six of our musical careers so far, and some of the most fun we’ve  had as a band.

Sitting there watching my cousin ‘Goody’ the ‘King at the Controls’ working his magic while keeping my brothers in Policulture creatively inspired and gut-laughing through the whole experience (even at 3:30 in the morning) was humbling to say the least. Sitting in that studio I felt  some of the proudest feelings of my entire life, and I owe a thanks to all the people who encouraged me to get to that place. Things have truly come full circle.

The album we created is sure to open up people’s ears to a new progressive reggae sound coming out of Boulder, Colorado. We couldn’t be more excited to share this music with the world and are forever grateful for the opportunity to have created our new album in Rochester, New York, the breadbasket of American reggae music.

The events that transpire in this life are not to be ignored. They can demonstrate our purpose, our trajectory and bring us closer to realizing our true destiny. Through the message of reggae music we are inspired to live in a righteous way, paying careful attention to the signs in life that encourage us to follow the path that’s best suited for us. While our destiny may not always clearly reveal itself, it’s the unique experiences that shape us as individuals and provide us with insightful context to our past, giving us a greater understanding of how we have arrived here today.

Policulture’s upcoming release Mountains to Cross will be available across all digital platforms August 17. Catch them on tour this summer in select cities. 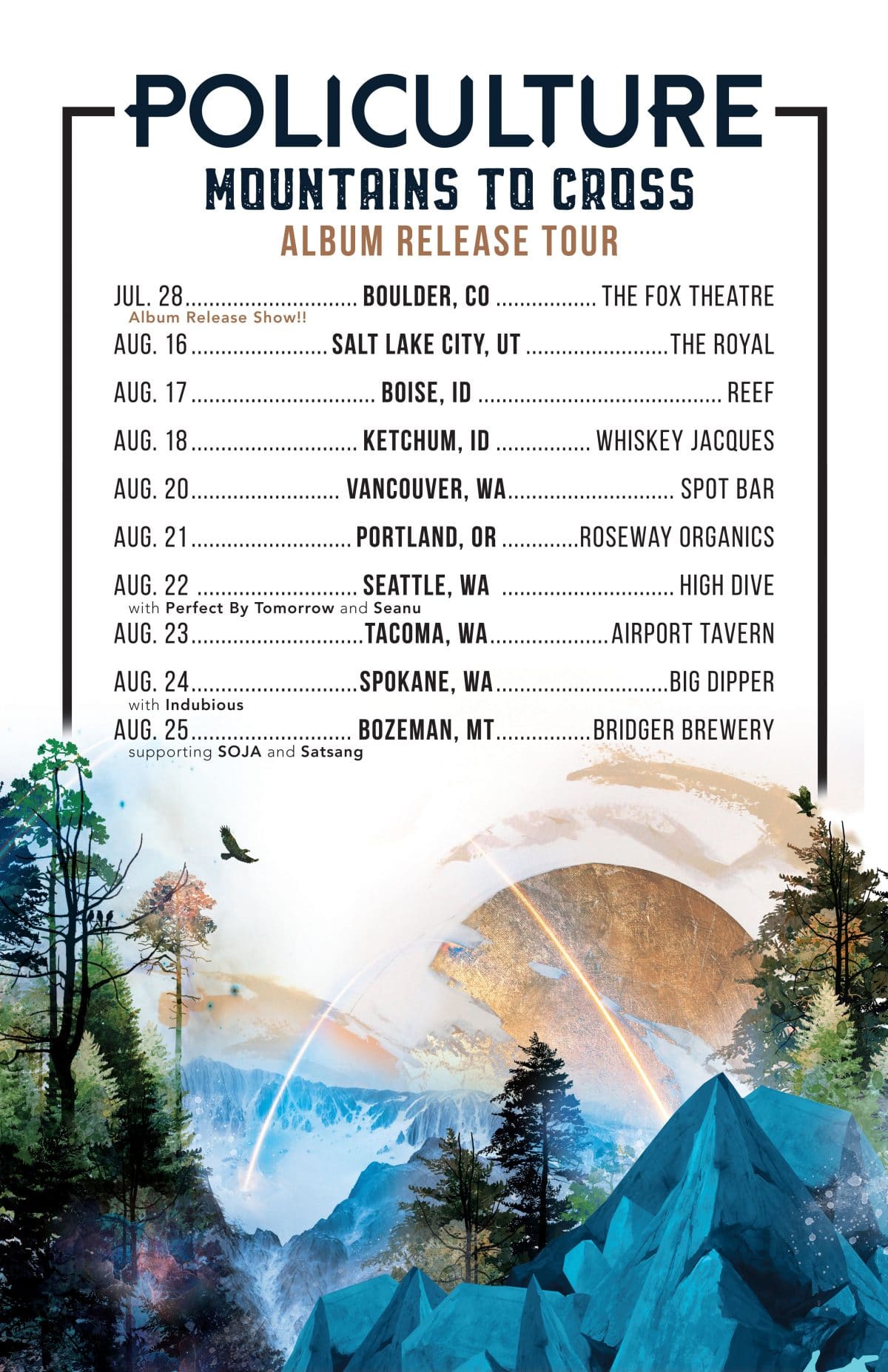