There is something that intrigues me about analog tape recording in the modern era. Perhaps I’m fascinated that we are still hung up on the sounds of yesterday, or maybe by the fact that artists are still finding ways to wow us with old technology.  Upon first consideration, one might think that all that could be done has already been done, but then Flying Vipers prove that assumption wrong.

Take for example, their offering, Green & Copper: The First Two Tapes. Originally released as two separate albums on cassettes — The Green Tape on a green-colored cassette in 2015 and The Copper Tape on a copper-colored cassette in 2016 — the band recently pressed vinyl of the two together on one record.  I appreciate that they stuck with that theme by releasing two differently colored albums, one emerald-green clear vinyl and one volcanic-copper metallic vinyl.  No matter which color you decide to buy, both are brilliant in hue and sound. 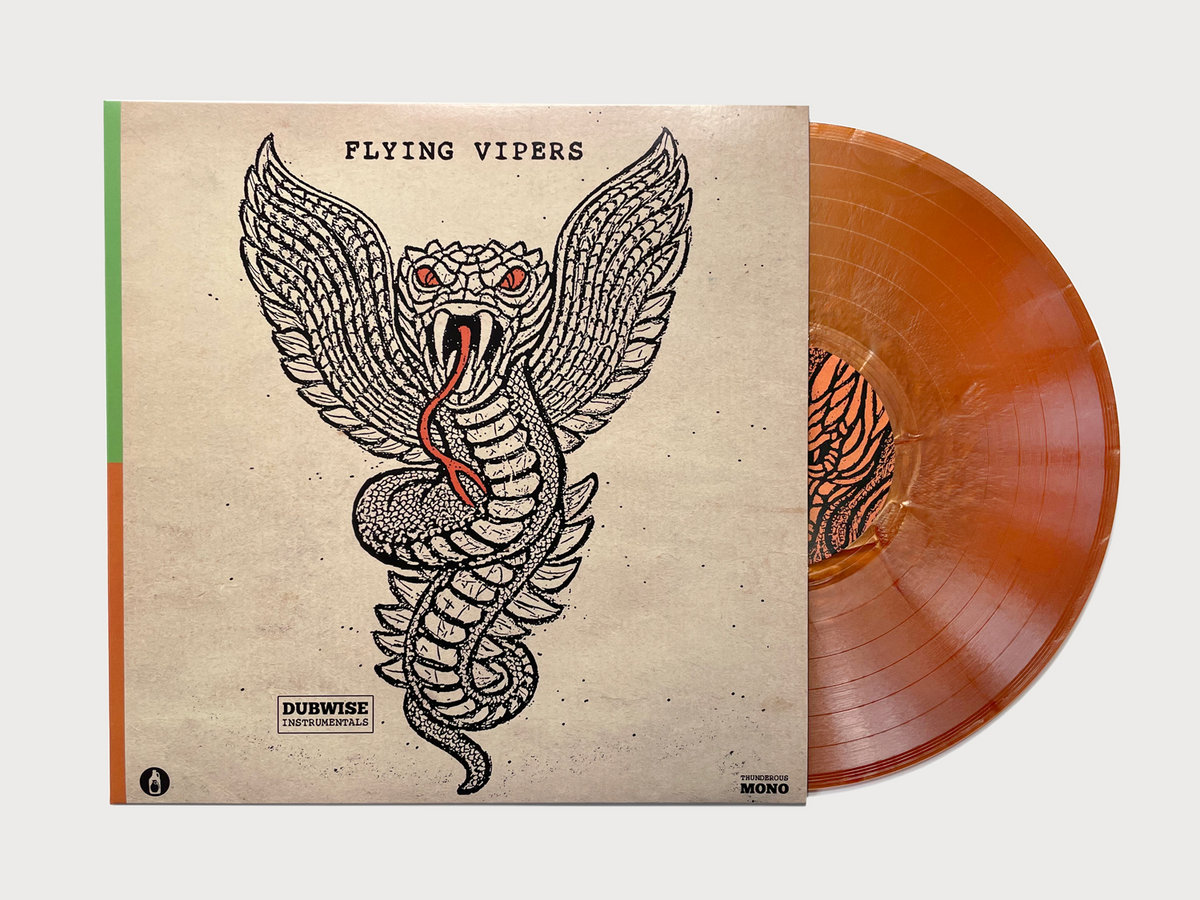 Why would an artist choose to release music via cassette tape as recently as 2015? John Beaudette, who plays guitar, bass and melodica as one half of the duo of twin brothers that pilot Flying Vipers, provides some insight: “We chose that format for a few reasons. It was recorded and mixed 100% on cassette (Tascam 488), so it seemed right. It was way, way cheaper and faster than pressing vinyl. (This was a ‘new band’ that had zero expectations.) Certain types of music lend themselves better than others to the format — the tape compression rolls off a lot of the highs but can still have nice rounded low end, so it’s pretty good for vintage (not modern) reggae sounds. Plus, we grew up with tapes, so we will always have a soft spot for them.”

The choice of the band name, Flying Vipers, also aroused my curiosity.  John explained that it half came from Dungeons and Dragons and half from Harlem slang of the early 20th century.  John and his brother Marc, who plays drums in this project, were avid players of D&D back in grade school and their characters regularly fought the enemies named Flying Vipers.

John and I also found a common interest when he told me he is a big fan of Fats Waller. He had bought a CD compilation called Viper Mad Blues – 25 Songs of Dope and Depravity which contained songs from the 30s and 40s that were about marijuana smoking. Famous songs by Fats Waller, Cab Calloway and Leadbelly to name a few. During this era in Harlem, jive talk was developed.  Jive was a slang that could be heard in all the jazz music of that time period that came out of NY. The term “Viper” meant that you were a marijuana smoker. I agree that the term is fitting for a modern reggae and dub band because what is reggae and dub if you’re not “mugglin?”

As a studio engineer myself, I really wanted to get down to the nitty gritty of the recording process for them — what they used, how they used it and why they used it.  Sure, I can talk about what songs stick out to me, but let your own ears do the listening.

The bulk of my conversation with Marc and John was all about the studio recording and mixing process. I had seen in the credits that it was recorded on a Tascam 488 multi-track cassette recorder, and this really piqued my interest. I wouldn’t have even guessed that it was recorded on cassette because it has such a high fidelity to it, which isn’t really synonymous with cassette recording.  Recording to cassette can often be noisy depending on the tape used, or the machine. It’s mostly because of the thin width of tape, and you are trying to stuff a lot of high dynamics within that thin width.  Four tracks are pushing it, but eight tracks on 1/8-inch tape is just crazy!  But somehow, they prevailed. That’s because the person that recorded it knew how to engineer well on the 488. With that, I suppose anything is possible.

You may know this engineer well, but more as the vocalist of 10 Ft. Ganja Plant, Ras Jay Champany.  John said, “Jay would cringe at the idea of being considered a studio engineer. He doesn’t consider himself one as he has no formal training, nor does it for a living.”

Well, in my view, yes, Jay is an engineer for sure.  He knew how to work this Tascam to provide a terrific final product and he put so much heart and soul into the mixing process. I was told that he would sit for hours and days, on his bed, spliff in hand, and mix many versions until himself and the rest of the band were satisfied. He mixied everything on the 488 to a digital two-track recorder using only a Tapco Spring Reverb, a Roland RE201 Tape Delay and a Mutron Phasor II.  It doesn’t get any more classic dub than that.  Those are tools of the trade. 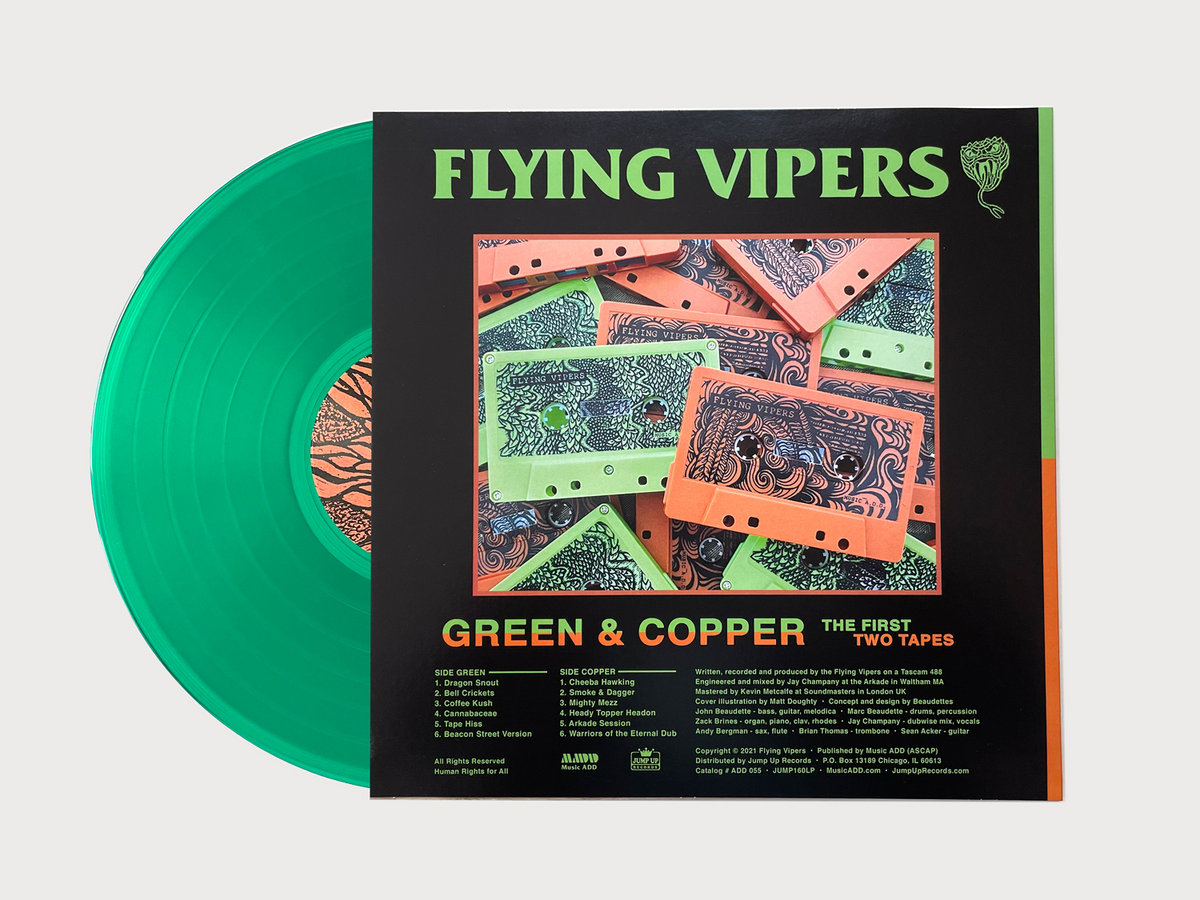 Let us rewind a moment to talk about the recording process.  The band had kept the microphone techniques and track count as simple as possible.  A borrowed Neumann U47 for an overhead drum mic, a kick mic on tracks 1 and 2.  Bass direct to track 3.  Zack Brine’s Hammond M3 on track 4 for the initial tracking of the riddims.  After playback, members John and Zack switched to guitar and piano respectively and overdubbed the “chop” tracks together at the same time.  After some track bouncing, a technique pioneered during the tape-recording era of mixing tracks together to new tracks on the same machine so they can have empty tracks to record on, they recorded percussion, melodica and horns by Andy Bergman and Brian Thomas.

After the mixing stage was complete, they sent it to be mastered by Kevin Metcalf, who had worked with many artists and labels during his career, including David Bowie, The Clash and Greensleeves Records.  When Jump Up Records decided to take Flying Vipers on and re-release both tapes onto vinyl, I had wondered if they had thought about remastering it since Kevin had originally mastered it for cassette tape.  John and Marc both agreed that since Kevin had retired from the music industry that they should keep his vision of the final sound as a tribute to his work. So, Jump Up’s vinyl master is as close to the original cassette sound as possible.

To me, this record having been recorded on cassette really is a testament to great engineering.  The instruments and drums, in particular, pop through the mix with definition and clarity.  There is not too much noise, which is a part of recording on such a small width of tape. All of the classic sounds of dub are here and that’s because this band and their friend that helped make this record have studied their craft and their predecessors and put every ounce of themselves into this project.  This record is outstanding, and I think you will agree.

Limited edition vinyl of Green & Copper: The First Two Tapes can be purchased here. There are only 250 copies of each pressed so if you’re interested in owning one of these collector’s editions, step lively!

Finally, for those interested in catching the Beaudette twins and company perform their dub magic live, Flying Vipers will be performing in the Boston area on Sunday April 10th along with Easy Star All-Stars  at Middle East Downstairs in Cambridge, MA, at 2pm. (All Ages matinee show.) Click here for tickets. 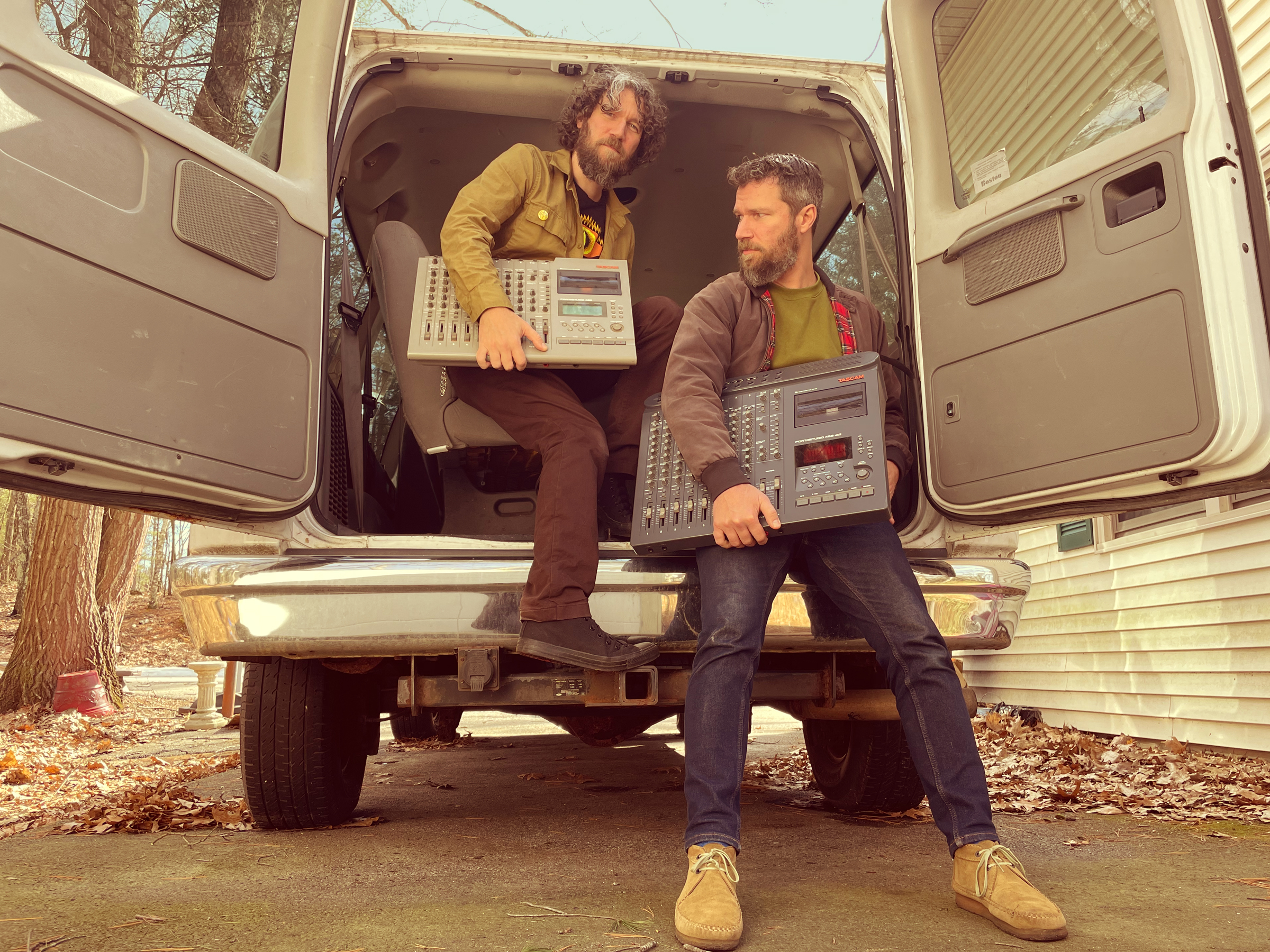 Marc & John Beaudette. Marc is holding a Tascam Portastudio MK I, which they used to make the Green Tape / Side A of the new LP, and John is holding a MK II, the one used to record the Copper Tape / Side B.

When he is not recording legends such as Cornel Campbell or soon to be legends such as Alex Tea, you will find him writing about the heart and soul of today's music on the pages of Rootfire.

First Listen: The Slackers – “Hanging On” →