Rootfire’s “Rare Record Showcase” is a new bi-monthly series dedicated to sharing top-quality Jamaican and Jamaican-inspired records of the past, that have heretofore unjustly existed under the radar of all but the most deep-diving music lovers.

For this first installment, we are focusing on the roots masterpiece Babylon Fall by Junior Ross & The Spear. 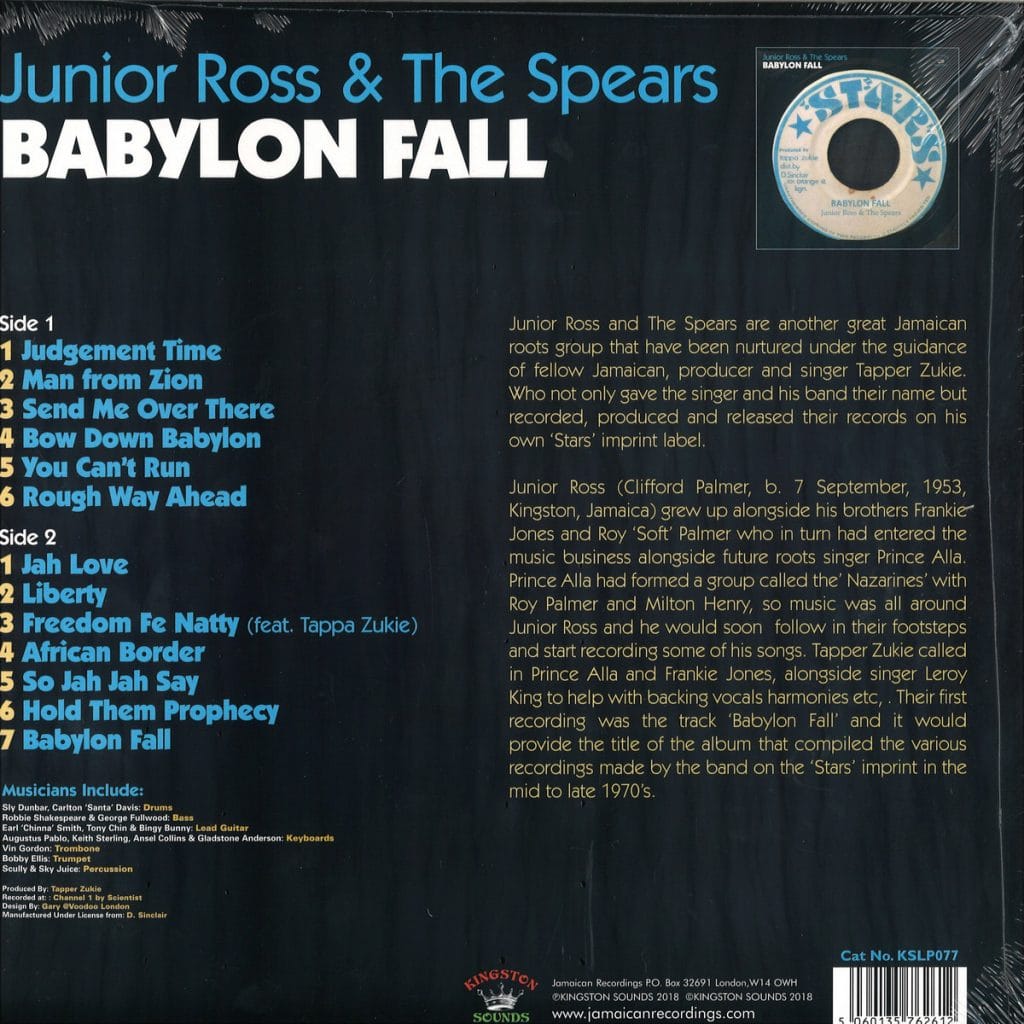 I want to let the music do most of the talking here. I think it will suffice to say that this is one of my Top 20 reggae albums, although technically it is not an album but rather a collection of singles. These tunes were all released as 7”s by producer/deejay Tappa Zukie between 1975 and 1977 (which happen to be my favorite 3 years in Jamaican music), and were compiled together to form the album Babylon Fall in 1992. They were re-re-released in 2002 by the excellent Blood & Fire label as part of a two-disc set called I Can Hear The Children Singing that also featured a classic but obscure album by the roots artist Prince Alla. That Blood & Fire release is the one we pulled from to make this Spotify playlist. If YouTube is your preferred streaming site, check this playlist made up of the original singles.

Militant lyrics, heavy heavy steppers riddims, and the murderous voices of Junior Ross and The Spears make these timeless roots killers some of the very best of the mid-1970s. This record never gets old to me. Favorite tracks are “Judgement Time,” “Hold Them Prophecy,” “Babylon Fall,” and the dub of “Liberty” entitled “African Border.” But these songs are all 10s. Pure killer, zero filler.

If the music speaks loud enough for you, read no further! For those seeking more in-depth info on Junior Ross, there are great liner notes included in the Blood And Fire release which cover both Prince Alla and Junior Ross; I have provided the section on Junior Ross in full below. 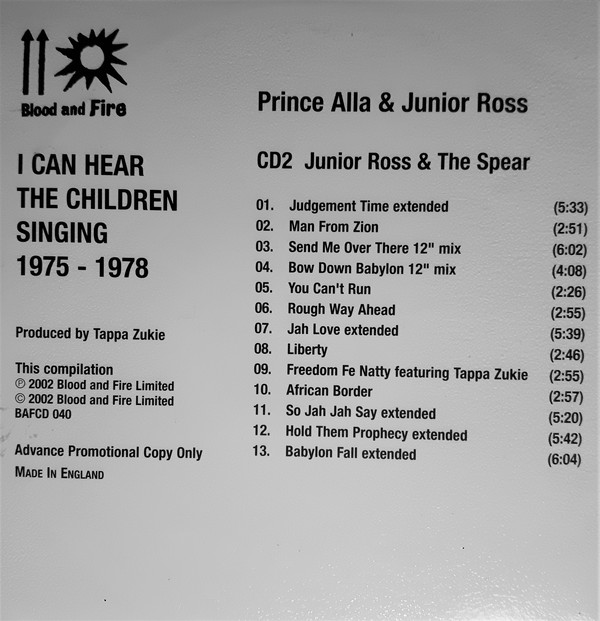 Junior Ross was born Clifford Palmer on the 7th September 1953, in Jubilee Hospital, Kingston, as he informed this writer in April 2002:

“Junior Ross is my singin’ name – I have to give thanks to Tappa Zukie for givin’ me that name…..Start singin’ in the seventies – The first tune was ‘Babylon Fall”, [for] Tappa Zukie – again, I ‘ave fe give him credit. He’s the one who bring me into the faith. First of all, Tappa Zukie was a man who me an’ him grow together. A lickle secret weh I never really let out yet – Tappa Zukie use to take away his parents’ money to buy clothes for me an’ him, to go to dance, up an down, so I grateful for him. Then one day – you ‘ave to say is a beg-time, the first song I record. Next man I ‘ave to give thanks to, to be in the music phase, is John Holt, because the first try I get, I was failin’, ‘cause it was a short time, a beg-time. John Holt was the man who put me on the mike, set me up an’ say ‘Give the youth a nex’ try’. That was at King Tubby’s – mid-seventies, somewhere aroun’ there.”

The above-mentioned ‘Babylon Fall” also gave title to the album reissued here, the second disc of this set. Although most of its tracks had been released by Tappa on his ‘Stars’ imprint during 1975-1977, it wasn’t until 1992 that they were collected on a vinyl album. Junior Ross & the Spears were a vocal group with a changing lineup – at times, Prince Alla, Roy Palmer, Frankie Jones and Leroy King all contributed backup vocals behind Junior’s lead, like on “Bow Down Babylon”, as Alla remembered in the interview with Steve Mosco quoted earlier:

“Yes, that was harmonies, is one of the brothers dem lead it. His name is Challa who sing lead on that song. And sometimes you had Frankie Jones sing lead too. But most time I sing harmony with them you know, until I sing my song and them sing harmony with me.”

Another who sang backup harmony in the Spears for Tappa was Leroy King [born 25th December 1949, Jubilee Hospital, Kingston] who cut a few sides as a soloist during 1977-1982, including the brilliant “Mash Down Babylon” for Roy Francis’ Phase One label. in 1977:

“Well, we been singin’ for quite a long time now – nearly thirty years now – it could a more too. Well, I really am a solo singer now, but I use to be in a group before by the name of Saints, weh did “Brown Eyes” an lotta song like that, but after that we come an’ join Junior Ross as the Spear an’ do a few backup tracks like that……He had a brother, Roy Palmer, well, he died….. tragically. I did “Mash Down Babylon” at Joe Gibbs with We The People band, Lloyd Parkes, for Mixing Lab – Roy Francis. I also did “I’ve Tried” for him. I did “Johnnie Reggae“, “Pleasure Lady“, “Stop Bus Gun In Dancehall” [all] for High Times, Bertram Brown. I do a LP for Channel One – I don’t hear that LP so far, don’t know if release or what. I use to sing with Soul Syndicate, travel all around.”

King also sang with Junior’s brother Frankie Jones, on the 45s “Bygones” and “Marijuana” for Tappa. Not unsurprisingly, Frankie was a big influence on Junior Ross:

“My brother Frankie Jones – he’s a nex’ one who inspired me too, because he’s a good guitarist. He teach me how to play guitar, teach me the timin‘ [so that] I can play a few chords, lay my riddim an’ everything – respect to Frankie Jones. That is not to say I didn’t have some inspiration fe myself, beca’ Leroy King, Melodians – they used to rehearse in my house, an’ they put down the guitar at night , an’ I ketch my lickle one practice an’ one practice. That is how I get to play the guitar. But the real inspiration came from the seventies, when you know Rastafari consciousness was high. Until today it is the highest culture, to me”

That belief is evident from even a cursory listen to Junior’s songs; every word radiates a hard-won commitment to ‘roots and culture’:

“We see Babylon as a system that holdin’ the people today. It is sad how [some] cultural artists mek a shift after pursuing something positive…….I didn’t mek a shift – I stick with it until today, but I know good over evil, an’ it will still live on . All those songs written by me, yunno? Even ‘Youthman’ that Leroy Smart did, I was the co- writer fe it. Me an’ Frankie Jones wrote that song an’ “Ballistic Affair”, almost all of those songs, because we rehearse together, we put in words an’ words. Frankie sing with the Spears at times, so it was like a family – Leroy King, Frankie Jones, Prince Alla, even Tappa Zukie sing harmony sometimes. I only hope if we could a see some of those days come back today…… I use to wake up in the morning, 6 o’clock an rehearse till 10 o’clock – after eat a lickle ting an’ ketch up again – by 4 o’clock is rehearsal again, so a lot of inspiration would flow.”

The Palmer Brothers home must have been a busy place in those days – it was in their yard in Greenwich Farm that the Melodians wrote their epochal hit “Rivers of Babylon”. Junior learnt enough guitar to be able to devise rhythms in rehearsal and thus make the studio work flow more smoothly:

“You know the chords, an’ you tell the musicians dem: play from that to that, an’ that. I lay the riddims, most of them. Most of the arrangements was Tappa Zukie…”

For the future, he hopes to be touring in 2003, hopefully alongside his longtime brethren Prince Alla, like him an artist fully committed to sending out his messages of reality, strictly roots & culture, presented without apology. In the troubled world we live in, there is a need for such songs. After all, that was a major part of the late Bob Marley’s message as well, as Junior says:

“Bob Marley an’ other artists, I listen to them , feel the vibes, feel the inspiration, put the words together , an’ come up with “Baylon Fall”. Those times, Babylon was high on the list of downfall. It may mek a change since Bob gone, but it is still here, understand?”

This set is crucial roots music of the highest order, made for a definite purpose, as Prince Alla says:

“So we can sing a culture and teach people in a reggae music. It can’t die me bredren, nothing can kill it. The real reggae music, our music.”

All of us at Blood and Fire – along with Tappa Zukie, Prince Alla and Junior Ross – hope you agree.

← Women in Reggae: Pat McKay of SiriusXM’s “The Joint”