New Kingston’s fresh new single “Honorable” turns everything you know about the band upside down.

The song is like graduation day. Picture hundreds of students and their families sprawled out on the campus lawn. There’s a high that ripples through the crowd, a sense of accomplishment, yeah, but also of abstract anticipation. Real life is about to start.

It all ramps up to the moment the diplomas get passed out but this time the keynote speaker isn’t some faker spitting platitudes. A wise person is hitting you right where you are vulnerable in the most wide open moment of your life. Stay with me now.

You borrow a pen and jot down a few notes on the program clenched in your sweating hands, trying to catch up with what’s happening to you. Suddenly the speaker pauses, looks out and says, “The only reason I’m here is for you; if any of you has a question, please raise your hand, tell me your name, and ask it.”

In that moment, your mind goes blank. You can’t make your arm move and you can’t articulate what you’re feeling. You are sinking, realizing you are not taking the chance of a lifetime. You hate yourself.

The people next to you are also silent. Everyone looks around, sizing each other up, wondering who will be the first to raise their hand, and that hate you’re feeling spreads because it’s like you’re part of letting this guy down. The speaker is scanning the crowd, hawk-like, and his eyes come your way. Your best friend is sitting next to you. She raises her hand and as you’re wincing, everything you know about her coagulates into a brilliant articulation of everything you’re feeling. 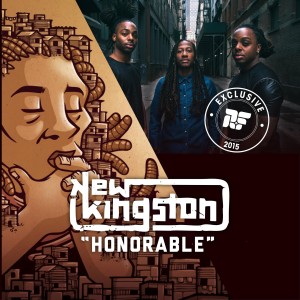 That’s what New Kingston’s song “Honorable” does for progressive reggae in the U.S. We’ve got this amazing moment happening and we need a new voice asking a new kind of question. With “Honorable,” three Jamaican-American brothers from Brooklyn, schooled from a young age by their father, deliver a patient and poignant song for the struggle. The question they’re asking is “Where’s the future of black reggae in the U.S.?” And the answer is right here.

This band started out precociously touring the world as Collie Buddz’ backing band. Then they stepped out on their own and started making records that had good moments, but still felt unripe overall. Now, with “Honorable,” you can feel all the work they’ve put in in the studio and touring relentlessly around the country in a van, over and over again. They’ve grown up and now they’ve got their own flavor and it’s really, really good.

New Kingston– Stephen, Courtney Jr., and Tahir, as well as their father Courtney Sr.– are some of the most respectful, hardest working musicians I have ever met and the steps they have taken to go it on their own have been paid in full. They have always had that reggae pedigree, that innate feel for the music, but now they have a message and a voice that fits who they are. Jamaican but 100 percent American. Young but carrying forward something old.

“We refuse to be who you want us to be. Cause we are, we are honorable.”

“Honorable” is from the new album Kingston City which comes out January 27, 2015 on Easy Star Records.

* “Honorable” is an exclusive Rootfire world premiere.
To have your song considered for a premiere send an email to rootfire@rootfire.net
Include a link to stream or download your song.
Put premier in the subject line.

This has got to be one of the best New Kingston write ups I have ever read!!