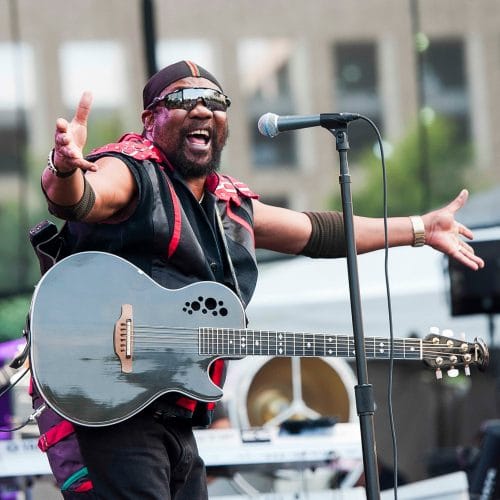 Toots Hibbert was the subject of Rootfire’s very first Center Stage with Reggae Icons Project, the goal of which was to honor foundational reggae artists while they are still alive, working with them to tell their histories in their own words. The project was announced on August 27 and Toots went into the hospital with flu-like symptoms that night. He never came out. Toots Hibbert died on September 11, 2020, of complications related to COVID-19. He was believed to be 77 years old.

Toots is one of the true architects of reggae – so much so that “Do the Reggay,” a 1968 single by Toots and his group, The Maytals, is credited with giving the genre its name. Classic songs written and recorded by Toots and The Maytals have been covered by the likes of The Clash and The Specials, and the group was featured in reggae’s greatest breakthrough event – “The Harder They Come,” the 1972 film that became an international sensation. The all-star guests on TRUE LOVE range from legends like Keith Richards, Eric Clapton, and Bonnie Raitt to younger stars including No Doubt, The Roots, and Phish’s Trey Anastasio. The caliber of these collaborators reveals the impact that Toots has had on several generations of rockers and rappers, while appearances from reggae icons Bunny Wailer and Marcia Griffiths show the respect granted to the man who might be the music’s greatest living vocalist. At the heart of it all is that voice – drenched in soul, rooted in gospel, and still breathtakingly powerful after six decades in the spotlight.

There are decades of Toots to discover; the many attitudes he’s given us since the start of ska and Jamaican independence in the 1960s. With his two mighty Maytals, Henry “Raleigh” Gordon and Nathaniel “Jerry” Mathias, he sang iconic truths like “Monkey Man,” inspiring a generation of skinheads, and “54-46 Was My Number,” a wry, but not bitter response to his unjust incarceration for ganja possession. Toots hipped our heads in the 1970s with the dynamic pan-Africanism of “Funky Kingston” and the cautionary message of “Pressure Drop.” He redefined soul with the Toots In Memphis LP in the 80s, and reminded us that he is the Skafather in the 90s, with the appropriately-titled 1998 album that speaks for itself. Toots kept evolving while staying uniquely the same.

After an over-excited fan injured Toots by throwing a vodka bottle at him onstage in 2013 (Toots asked the judge for leniency), the Master Singer decided to take a tactical retreat from the industry. He still performed live and still mesmerized. But where recording was concerned, he turned within, laying tracks down in his home studio, playing every instrument, and creating a massive tumult of music; flexing his range, but always close to his Revivalist roots that came from Africa.

The wrongful imprisonment he sang of in “54-46 Was My Number” gave Toots insight into the corrupt systems that try to dominate our greatest endeavors. In his new resistance music, an experienced anger at (and sensitivity to) injustice has been made all the more clear.

Finally, Toots sat down and sifted through the mass of songs with Trojan Jamaica co-founders Zak Starkey and Sharna “Sshh” Liguz. Together, they explored those years of agitation, contemplation, and resolution, and selected the songs on GOT TO BE TOUGH. Once again, Toots steps forward triumphantly.

Tough though the message is, your body has to respond to these songs, and your mind will follow. An impeccable performer, Toots knows that the dance, itself, is a primal exorcism; a greater guarantee than any, that if we heed his warning, we will live to Do The Reggay into the 21st century and beyond.

@The Expanders: Tribute to Toots Hibbert of @Toots and the Maytals