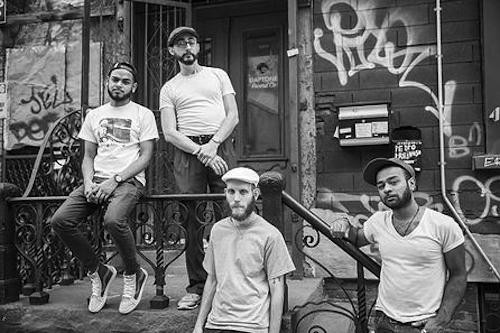 Beyond the gilded wealth of Manhattan and the pretentious hipsterdom of Brooklyn lies the borough of Queens – a dynamic stew of cultures and languages in a state of constant reinvention bridging the past and the future. Bubbling up from this cauldron of Queens comes The FRIGHTNRS, a four piece ensemble who have taken the cooled out vintage vibes of Jamaican rock steady, combined it with the raw energy and vocal stylings of 80s Rub A Dub and added a touch of punk rock spirit to create an entirely unique sound that redefines what a reggae band can sound like.

For the past six years, The FRIGHTNRS have been one of the hardest working bands in New York, crafting their live set and developing their sound in the DIY underground of NYC reggae and its mash up of live bands and sound system culture. This hard work paid off as The FRIGHTNRS debut release garnered attention and airplay from reggae / radio legend David “Ram Jam” Rodigan and Mad Decent’s Diplo. They soon followed this with the vinyl only release of “I’d Rather Go Blind” on Daptone Records. This summer, The Frightnrs are set to share their unique sounds with the world as they release a host of tunes with Mad Decent. The Frightnrs, like the borough they hail from, represent the sound of now standing firm on the traditions of the past.