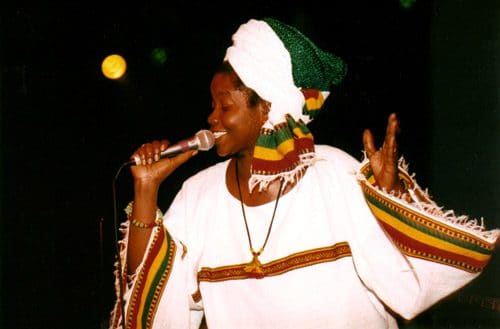 One of the dancehall era’s few successful female DJs, Sister Carol was something like reggae’s answer to Queen Latifah: a strong, positive feminist voice who was inspired by her faith and never resorted to sexual posturing to win an audience. Leaning heavily on socially conscious material, Sister Carol delivered uplifting and cautionary messages drawn from her Rastafarian principles, while always urging respect for women. She was more of a singjay than a full-time toaster, capable of melodic vocals as well as solid rhymes. Never quite a commercial powerhouse, she nonetheless enjoyed a lengthy career and general critical approval.

Sister Carol was born Carol East in Kingston, Jamaica, in 1959, and grew up in the city’s Denham Town ghetto. Her father worked in the music industry as a radio engineer, and in 1973, he moved the family to Brooklyn in search of work. Carol got involved in New York’s thriving Jamaican music scene, and tried her hand at singing; however, music wasn’t a career prospect yet, as Carol earned a degree in education from CCNY and gave birth to the first of four children in 1981. Not long before the latter event, she met Jamaican DJ Brigadier Jerry, who inspired her to try her hand at dancehall-style DJ chatting rather than singing. She developed rapidly under Jerry‘s mentorship, winning talent competitions in both New York and Jamaica, and toured as an opening act for the Meditations. Her first album, Liberation for Africa, was released in limited quantities on a small label the following year.

Recorded for the Jah Life label, 1984’s Black Cinderella was the album that established Sister Carol in the international reggae community, featuring the title track (her signature song) and “Oh Jah (Mi Ready).” Carol subsequently formed her own Black Cinderella label, which gave her an immediate outlet for single releases in the years to come. Most notably, she cut a cover of Bob Marley‘s “Screwface” in tandem with onetime I-Three Judy Mowatt, who issued the single on her own Ashandan label. It took Carol several years to come up with another LP, however, as she briefly turned to an acting career; she earned supporting roles in two Jonathan Demme comedies, 1986’s Something Wild (which included her soundtrack cut “Wild Thing”) and 1988’s Married to the Mob.

Sister Carol’s second album, Jah Disciple, finally appeared in 1989, kicking off a streak of consistent recording activity that lasted through the ’90s. Mother Culture followed in 1991, giving her another nickname to go alongside “Black Cinderella.” Her highest-profile album to date, Call Mi Sister Carol, was released by Heartbeat in 1995, and was followed a year later by Lyrically Potent, which earned Sister Carol her first Grammy nomination for Best Reggae Album. Her next album, Isis: The Original Womb-Man, was released on Bob Marley‘s Tuff Gong label in 1999. 2001 brought her first-ever live album, Direct Hit!: Sister Carol – Live; it was followed in 2003 by Empressive, which featured a duet with Buju Banton on “His Mercy Endureth.” ~ Steve Huey