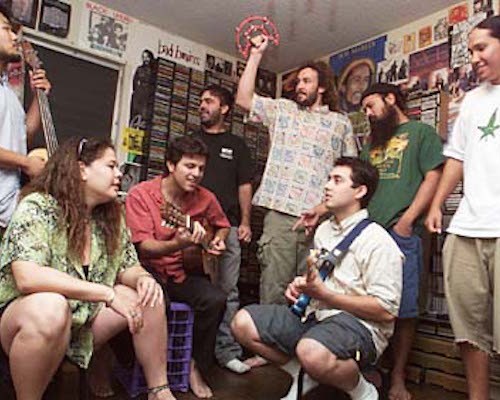 Ooklah The Moc, formed in 1997, hails from O’ahu, Hawaii and is known internationally for their roots-dub-reggae sound. Through the years and several lineup changes, Ooklah has become a strictly reggae band and has settled on its present 8-person lineup in 2000. Their roots are with punk rock music, however, over the years have morphed into a roots sensation.

Ooklah The Moc has played shows all over O’ahu, Maui, Kaua’I and the Big Island. They have likewise opened for many international artists such as Michael Rose, Many members of the Marley Family, Yami Bolo, Gregory isaacs and Wailing Souls, Aswad and many others.

The name name Ooklah The Moc comes from a cartoon, Thundarr The Barbarian. A post-apocalyptal world with Thundarr (a sort of robin hood) riding around with his sidekicks, princess Ariel and Ookla the Mok.

With over a decade of experience, four studio albums and performances with the some of the biggest names in reggae, Ooklah has a bright future.