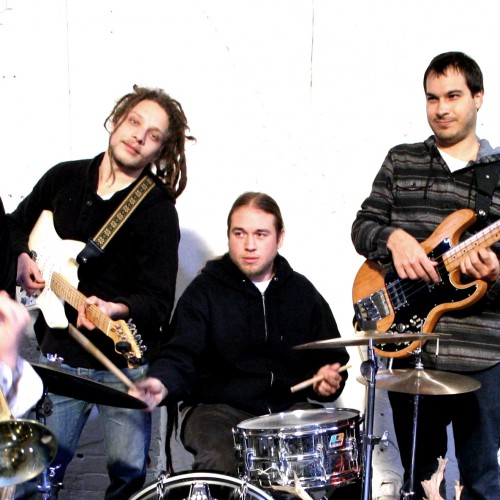 After over a decade of entertaining audiences around the Northeastern US and Brazil, Kiwi continues to cause a stir with some of the New York City area’s finest soul and funk musicians. The band, which includes Alex Tea (vocals, guitar), Ramsey Norman (drums), Steve Capecci (bass), Mike Torres (percussion), Dave Stolarz (keys), Barami Waspe (tenor sax), and Rob Edwards (trombone), has been invited to share the stage with veteran reggae/ska acts including the Pietasters, John Brown’s Body and Groundation.

Much of Kiwi’s pan-global approach to music is inspired by the time that primary songwriter Alex Tea spent in Brazil, beginning with a trip to the ocean-side city of Fortaleza over a decade ago. It was in Fortaleza that Tea first fell in love with the Portuguese language and capoeira, the Brazilian martial art that combines exuberant dancing and singing with powerful strikes and take-down maneuvers.

“What drew me into capoeira was the sense of community among everyone involved,” says Tea. “Each roda [capoeira exhibition/match] had a live soundtrack that featured instruments, melodies, and cadences that I had never heard before, but seemed so familiar.” It didn’t take long for Tea, the grandson of a classical violinist, to incorporate Brazilian rhythms and instruments, as well as Portuguese lyrics, into Kiwi’s music.

In addition to hundreds of club and dancehall performances, Kiwi has also performed at a variety of music festivals and community events up and down the east coast. They are also proud to be an active and vibrant presence in their home base, the Jersey City arts scene. With a burgeoning American following, Kiwi also has a growing fanbase in Brazil, where they have embarked on several tours.
Kiwi has also participated in a range of local festivals and community events. They are an active and established presence on the Jersey City arts scene.