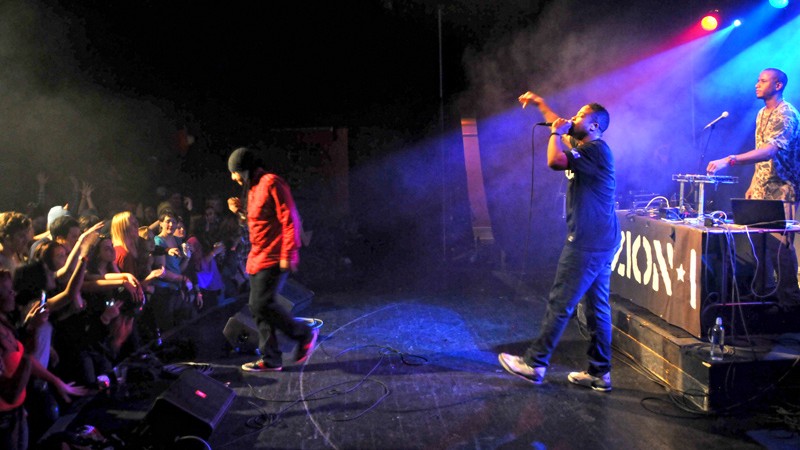 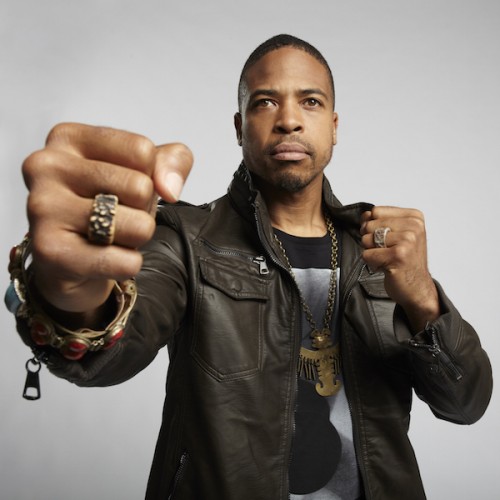 “It’s interesting where we are right now,” says Zion I co-founder Zumbi. “I’m so firmly into hip-hop, and Amp is into so many other genres. Somehow it just works” For over 20 years, Zumbi and Amp Live have made music together, celebrating a juxtaposition of influences, with a shared message to preserve the art of music.

After two dozen releases, spanning albums, EPs, mixtapes and collaborative projects, Zion I has been embraced as an Oakland, California mainstay, known for advanced lyrical deliveries, otherwordly Electronic beats, and a cohesive back-to- the-future musical package unlike any others in the space.

Although the duo is rooted in Bay area traditions, Zion I is a gestalt of lived geographic experience. Producer Amp Live hails from San Antonio, Texas, where a musical, churchgoing family outfitted the bedroom producer with a vast arsenal. Coming from Philadelphia, with time spent in Cincinnati MC/producer Zumbi gravitated towards the abstract aesthetics and keen lyrics of Freestyle Fellowship and De La Soul. The pair crossed paths in 1991, at Morehouse College in Atlanta. Both would go on to partially form the Tommy Boy Records-backed group Metaphor. But the duo soon realized that as the collective was confronted with delays and industry hiccups, they shared a dream that outweighed the hurdles. “I’ve always been weird. Amp’s always been a lil’ different. So when we got to college, we didn’t stand with the fraternity cats, we didn’t stand with the super Afrocentric cats, we didn’t stand with the jocks, we had our own lil’ space.” That distinct bond, along with the drive would separate the two from the pack, in their group, and in hip-hop.

Following the Atlanta tenure, Zumbi joined his parents in Oakland. While climbing the corporate ladder, it was abundantly evident to the MC that music solely occupied his dreams. Self-recording and pressing his music to tapes he would later disperse for free, Zumbi immersed himself in the scene. “At the end of shows, I’d see all the tapes on the ground, and be heartbroken.” However, he noticed something. “The music I made with Amp, I saw that people would actually like it, and take it home.” Believing that Zion I offered something truly original, Zumbi persuaded Amp to take residence in Oakland. “We stayed at my parents’ house for eight months. We just did shows, made a lot of music, and got our feet deep into the soil.” Many of those insomniac home studio sessions would later surface as 2000’s Mind Over Matter. Signed to Ground Control Records, the duo was an acclaimed staple West Coast act in the era’s underground Hip-Hop movement.

With a pocket all their own, Zion I followed up in 2003, working with influences on Deep Water Slang 2.0. In true Bay tradition, the duo remained active, churning out at least one release a year between 2005 and 2014. Catalog highlights include The

Grouch-joined linguistic clinic “Silly Puddy,” early K.Flay standout appearance on the Electro-driven “Coastin’,” and the gritty turf-talk of “Don’t Lose Ya Head” alongside Too Short. “He’s an idol to me,” declares Zumbi. “To do a song with a legend, one of our biggest hits, and it slaps—it said a lot about what was goin’ on in Oakland at the time.” After years of representation, Zion I would cement their status in the Bay after selling out The Fillmore annually, through their Hella Fresh Fest.

“At some point, we knew we had something good. But we never thought we’d get to this point,” Amp Live reflects. In 2014, the tandem has already released two extended plays. “We’re trying to put out music more often now, and the output has to be consistent.” In January, Zion I released Masters Of Ceremony. Easily taken as a simple B-Boys’ lament, the five-song effort actually has deeper themes at play. “It’s an ode to the culture I grew up loving, and how I perceive it now,” Zumbi shares, noting that the EP was inspired by a particular Rap star known for perpetuating questionable messages about race, drugs, and sex. “Hip-hop is a tool to empower us, not to limit us and put us back into whatever our oppressor wants us to be.” The “master” is much bigger than music, and Zion I hopes to snatch the mic.

April’s Libations is a bit different. The six-song effort stems from Zumbi’s best friend recently dying. Pained, the songwriter constructed an album rooted in the New Orleans funeral tradition, celebrating life above mourning death. From a personal place, both of these EPs make use of the format, and showcase Zion I’s versatility.

Nearly 25 years in, Zion I is a cemented bond in music and friendship. With solo interests in the side, these master craftsmen prove that the MC/producer battery may be hip-hop at its purest. As it is for Amp, art is a necessity for Zumbi. “Music is a psychological need for me, it gives me a sense of fulfillment.”