Rootfire is starting a new series about Women in Reggae, to help amplify the voices of the amazing females that have made an impact on this music. These stories are specifically meant to help push women to the forefront when they have historically been held back, whether intentionally or subconsciously, not just in music but in politics, the workplace, and elsewhere. So with our first feature of this series, I’m pleased to light the torch and illuminate a mighty force in reggae: Sister Carol. -K.K.

Sister Carol’s music has a special meaning to me. I discovered her work, thankfully, right as I was starting out on my own DJ career. I was a college student hosting a radio show on UW-Madison’s station, and my mind, like a sponge, was absorbing reggae from past decades, filling out my playlists for the airwaves. What meant most to me about finding her at the time I did, is that I didn’t really have any female mentors when I was stepping out into the DJ scene, not to mention the reggae scene. Her lyrics, so conscious, powerful, and badass, were just what I needed. Her voice was like my guide. She came from an angle that I could recognize and identify with. I remember getting ready for my first real DJ gig, outside of the radio, and being so nervous. I borrowed CDJs from the station because I didn’t have my own gear yet. I fretted over the playlist for weeks. I decided the first track that I’d play would be Sister Carol’s song “Oh Jah (Mi Ready)” from the album Black Cinderella. It was a meaningful choice, to have a woman’s voice be the first I ever really DJ’ed, and it made me feel supported.

I wonder what female reggae artists have had to deal with, as they have worked towards their accomplishments, in a male-dominated landscape. There’s no denying that women deal with specific challenges in a music scene highly saturated by men (especially most of the upper-level positions)—and it affects everything from our image, to our dynamics with colleagues, to our paychecks. 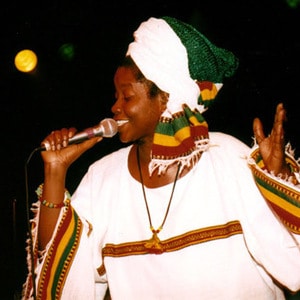 Now with all that being said (because it’s important to point out), Sister Carol has not only made a name for herself since she began putting out records in 1981, but she has persevered throughout the decades and has remained relevant. Born in Kingston, Jamaica, in 1959, she has witnessed roots reggae history while her father worked as a studio engineer. She emigrated to Brooklyn, New York as a teenager where she pursued higher education while simultaneously being active in the Jamaican music scene. She has a distinct, powerful voice in a DJ chatting-style. Her rhymes are mostly hard-hitting, but can be playful at times. If you haven’t heard her yet, my personal suggestion is to start with the albums Jah Disciple and Black Cinderella. As her latest album was released in 2014, there is surely something in her evolving discography for everyone.

What an honor to interview Sister Carol—born as Carol Theresa East, also known as Mother Culture and Black Cinderella—for Rootfire:

Rootfire: Did you have any female mentors in the reggae scene when you were starting out? If so, who were they, and how did they help you? If not, was it challenging in any way?

Sister Carol: Yes I did. Hortense Ellis, Judy Mowatt, Rita Marley, Marcia Griffiths, Cynthia Richards, and Miss Louise Bennett (Miss Lou). Just by observing how they approached their craft gave me an inspiration to venture into my own. I also had the privilege of touring with Sister Judy Mowatt and Sister Rita Marley early in my musical career, which had a significant impact on the artist that I am today. Even though I had mentors it was quite challenging at first because women performers were not seen in the same light as male performers, and so I had to go out and prove myself every time while not being compensated the same as the male performers.

RF: What was it like moving from Kingston, JA to Brooklyn, NY?

SC: That was quite a culture shock for me because it was not what I had expected. It took some time for me to get adjusted to living in NYC. I arrived in New York at high school age and it was quite an adjustment to go from school in Jamaica to school in America, which I addressed in one of my songs, “Run Things“.

RF: My favorite album of yours is Jah Disciple. What was going on in your life at the time that album was made?

SC: My ultimate priority at that time was trying to raise a family while pursuing a musical career. Some of the songs on this album reflected what was happening at the time both politically and culturally. So I was just going within myself and expressing the thoughts as they came to me.

RF: In your song “Potential”, you describe your experience of being a female DJ in Brooklyn, observing people’s reactions to reggae music. Do you feel like certain feminine qualities, like heightened emotions/empathy, give you an advantage in being a DJ and creating music?

SC: “Since mi live a Brooklyn as woman DJ/ I observe people as dem listen reggae/ Dem try to understand every word that yuh say/ In addition to that dem buy the records to play”… Of course it does, because we are not only females but wives, mothers, community persons, and teachers who have so much more to say, with responsibility and accountability.

RF: Have you experienced any challenges in the music business that you feel are due to your gender?

SC: Most definitely, as far as opportunity, salary inequality, and chivalry is concerned.

RF: What accomplishments outside of music are you most proud of?

SC: Obtaining a Bachelor Of Science in Education. It has certainly enhanced my writing ability and communication skills as a teacher who once taught in the classroom but is now teaching the world at large. It also made my mom proud of this accomplishment because she always insisted that education was a paramount priority.

RF: Did you ever meet any of your reggae heroes? If so, who and when? What were they like?

SC: I have become friends with Judy Mowatt, Marcia Griffiths, Bob Andy, Big Youth, Dennis Brown, Burning Spear, and Sugar Minott to name a few. They were everything I had expected and more. My father was an audio technician and he used to work with RJR, Studio One, and Bob Marley. As a teenager on occasion I had been with him while he and Bob discussed technical issues, but I never exchanged a word with Bob. Just being in his presence was a joy for me.

RF: Are there any current female reggae musicians who you enjoy listening to?

RF: What have you been up to with Michael Goldwasser / Easy Star?

SC: We are not currently working on anything, but I have done some projects with Michael/Easy Star before and found him to be a brilliant musician/artist.

RF: What are your upcoming plans musically and personally?

SC: I am on the verge of releasing my newest project entitled “THC – The Healing Cure” on the Black Cinderella record label. This CD contains fourteen songs celebrating the healing properties of Marijuana. As we come closer to alternative medicine it is important to know and recognize the many uses of this plant. l also continue to work on the memoirs of my story “The Black Cinderella Story” every chance I get.

Thank you, Sister Carol, for being a mentor to the world through your music!

Check out a few tracks that I highly recommend:

← Make It Better – One Year Later, Now on Vinyl

Rootfire At The Park – Hurricane Irma Relief Project →
wpDiscuz
We use cookies to ensure that we give you the best experience on our website. If you continue to use this site we will assume that you are happy with it.Ok