Throwback Thursday: Skadanks – Give Thanks

Back in the 90’s, the American reggae scene contained only a fraction of the bands it does today. The majority of touring acts came from either Jamaica or Africa, but there were a handful of American bands throughout the country playing local shows. In New York City, one of the most popular bands to frequent the fabled downtown venues like Wetlands, The Lion’s Den, CBGB and The Ritz was Skadanks.

Skadanks was New York City to the bone, comprised of musicians who were born and bred in the five boroughs, with the exception of their Kingston-born drummer, Cliff “Q-Liff” Simpson. Other members included:

While the band would continue to play gigs through 2016 (minus Rocker T who continues to write and perform music as a solo artist based in northern California), mainly backing well-known Jamaican artists such as Junior Reid, Super Cat,  Chaka Demus and Pliers, Johnny Osbourne and Sister Nancy, they would only create one album of original music.

And what an epic album it is! After success with their 1991 12” single “Whole World African,” produced by hip hop legend KRS-One, Skadanks released their Give Thanks LP in 1994, written by Rocker T and Alex Valenti and produced by D2 with help from Sidney Mills of Steel Pulse. I listened to this album countless times in the following years, and it remains one of my favorite reggae albums of all time due to its originality, high energy, and production style. I love vocals chanted inna deejay stylee, but too often dancehall reggae gets overly repetitive. The Skadanks, on the other hand, deliver top ranking toasting over dynamic songwriting. 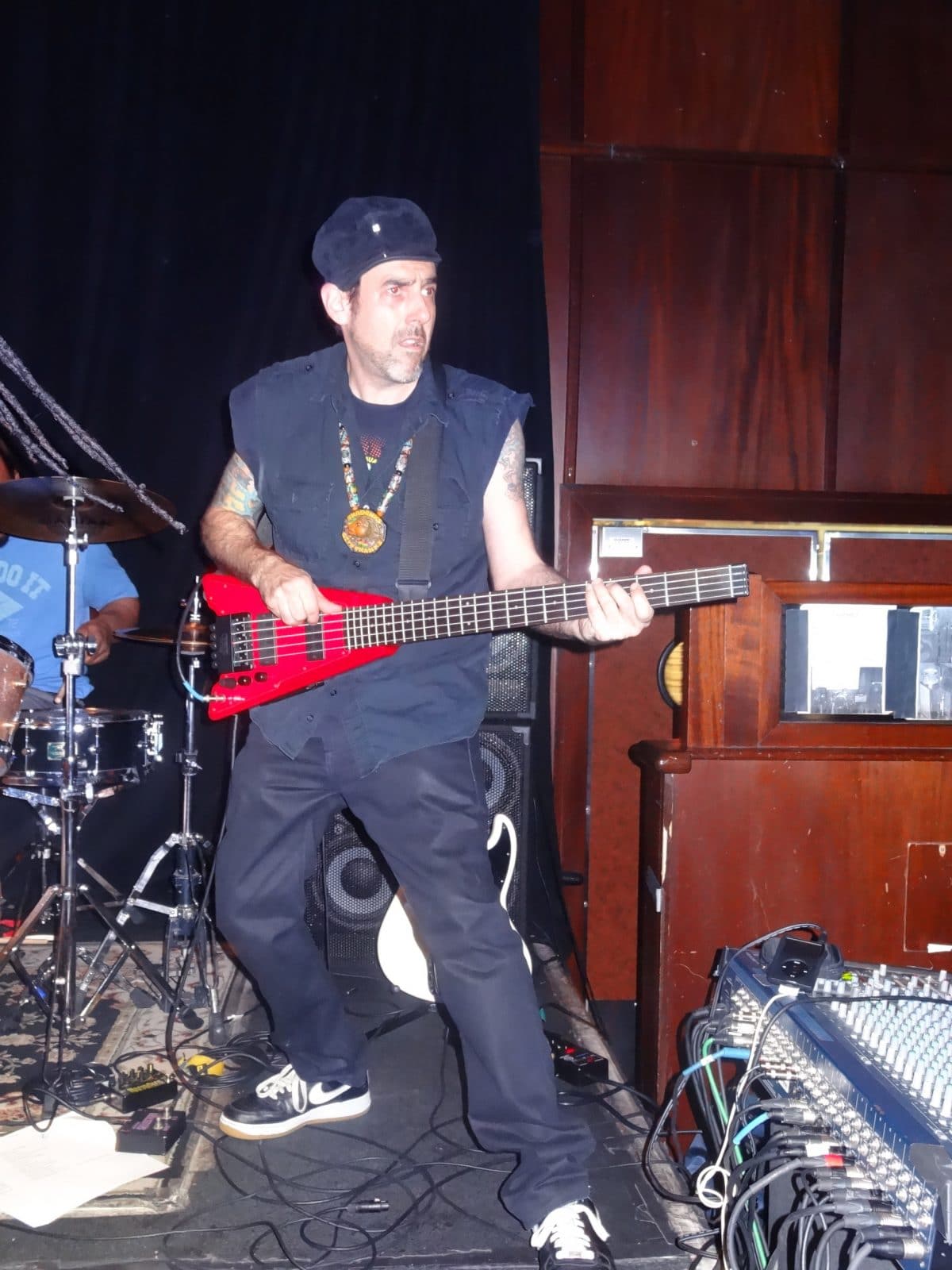 Alex Valenti holding down the bass.

Ahead of its time, Give Thanks blends hip-hop and reggae, with undertones of a punk rock edge reflecting the lower Manhattan and Brooklyn stomping grounds of the young band. This singular full-length release from the Skadanks features aggressive bass lines, pocket drum beats, and a singjay vocal tone, all of which comes alive via the hi-fi digital production designed to blow subwoofers. At the time, reggae rock pioneers 311 and Sublime were just starting to get their music heard nationwide and this album suitably fits the palette of the blossoming new genre of reggae rock, or surf reggae, or whichever other name you choose to call it.

While this album brings the heat from top to bottom, certain tracks stand out. “Ism-Skism” and “911” clearly show the 80’s raggamuffin influence on the band, while “Friends” and “Let Dem Be Fed” are slow and heavy bangers likely to please the dub enthusiasts out there. “Sweatty” interestingly weds patois-chanted vocals with a relaxing, almost lovers rock melody. And finally, the albums concludes with the infectious “2 Ruff,” a rocker evocative of the Beastie Boys’ hit “Shake Your Rump” that is sure to get listeners on their feet shaking their moneymakers.

As someone who closely follows the American reggae scene, considering what is popular these days I believe Give Thanks not only stands the test of time, but will actually resonate with fans even more today than it did at the time of its original release.

What do you all think?