When I was 16, my parents had cruise tickets to the Virgin Islands, and they asked me to go with them. While the cruise was enjoyable enough, I found myself enchanted with the people living on the islands, and especially their music. I had heard Bob Marley growing up, but now I was hearing all kinds of reggae coming from shops and played on acoustic guitars by the locals. I thought reggae was Bob, but this music was wonderful!

On St. John I went into a record shop and asked for the best thing the woman knew of. She handed me Culture’s Good Things, which entered my Discman and didn’t leave for weeks, at which point I looked up their most critically acclaimed albums and got my hands on a copy of International Herb.

Culture is roots reggae, centered around vocalist Joseph Hill, but in the early days with Albert Walker and Lloyd Dayes making it a vocal trio. Joseph’s voice is distinctive. It’s gritty and sarcastic. He’ll often laugh in the middle of a song. The arrangements are stellar, too, and the group saw success because their message was positive and delivered with hooks, three-part harmonies, and horn lines to snag you.

International Herb blew my 16-year-old mind, mainly because I was a high schooler with some friends in college, and I was learning about marijuana more and more, but through Culture’s title track I looked into Rasta herb belief. They didn’t see it as a horrible, evil drug. In fact, Rastas are ge 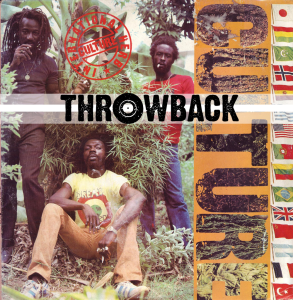 nerally anti-drug, singing against heroine and cocaine use. But this ganja plant, it was a spiritual thing. “It gives me inspiration in music,” Joseph sings. “Even doctors know about.”

Each song on the album got me questioning the meanings. What did they mean by international herb? When I heard “The Land We Belong,” I looked into where reggae came from. What land were they singing about? Who was this JAH and why did I like hearing about him more than I ever did other songs about God, in whatever form?

International Herb is gorgeous. “It a Guh Dread” is a prime example. The horns are delicate and fluid. The bass is round and bumping. The melody is like candy. Plus, it speaks against hunger and disease. It asks for help and searches for strength. Even if Culture is entrenched in Rasta spirituality, Joseph keeps things mostly political and social.

Anyone that looks deeper into reggae will know that it is rich with positivity, even in the dark times. I looked back at some of the rock I was listening to at the time, (Rage, Filter, Korn), and thought, “What do these guys have to complain about?” Reggae was real, and any stereotypes I had were broken down.

Imagine a teenager learning there was a culture driven through music that embodied so much of what he was feeling. I’m sure you can, because the power of music is that we usually find what we’re looking for. This album made it easy.

I love the group’s name because I think they sum up Rasta culture and Jamaican culture very astutely. They made it easy for me to learn from the songs what they were about. International Herb might be their crowning achievement, even better than Two Sevens Clash because it is more positive and thought provoking. I also associate it with beaches and ocean, so that’s not so bad, either…

John Powell Bio:
John Powell lives in Burlington, Vermont, and travels often throughout the country. He is a writer, poet, and musician. His biggest project has been Angelica Music, an online music magazine focusing on independent and unsigned music in the Northeast. Interviews and album reviews share the people behind the music and allow audiences to invest in the musicians, not just the music.

John loves all music, but is at least a semi-expert in reggae, alternative pop/punk, and rock n’ roll, the last of which he teaches about in his course, The History of Rock n’ Roll.

← Feel it in the One-Drop

#TheBeautifulGame and #TheUglyGame →
wpDiscuz
We use cookies to ensure that we give you the best experience on our website. If you continue to use this site we will assume that you are happy with it.Ok