The low E string of Jay’s guitar broke on the opening chords of “Until We Burn In The Sun.”
It was Nov. 4, 2007, and I was with Bedouin Soundclash at the Zodiac in Oxford for the first of an 11-show run in the UK.

It was my first time on stage with the band and I was trapped; the only way out was through the crowd. Like almost every other show on that tour, it was sold out, and the people were piled deep, keeping me from reaching Nunya, the tour manager to ask how to change the string on Jay’s Godin- the only acoustic/electric guitar the band was touring with.

In a moment of extreme panic, I grabbed the backup Fender Strat, fumbling like a kid running with an egg on a spoon, and tried to hand it to Jay. Before I could get the strap on his shoulder, the guitar slipped out of my hands and slammed into the side of his head.

He looked stunned, then cracked a hint of a smile, as if to say, “Oh shit, it’s your first minute on stage as our guitar tech and you are screwing it up already. That is not good.” Between my clumsy hands and the paper that hung in the guitar boat next to me listing the names of the strings of a guitar in chronological order, I was sure the band knew I was in over my head. I was. Jay never did play the Godin guitar again that night because I promptly broke the tuning peg as I tried to teach myself how to change the string. 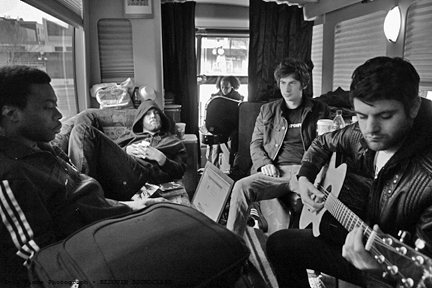 If it was not for the fact that one of my best friends, Matt Goodwin, was playing keys on the entire tour, I would never have been given the guitar tech/roadie job in the first place. At the rate things were going, I had to ramp up a quick learning curve to make good on his benevolence or we were both getting embarrassed.

The album’s single “Walls Fall Down” topped charts both in the UK and the band’s home country Canada, where the album was nominated alongside Feist and Celine Dion for “Pop Album Of The Year” at the Juno Awards, the equivalent to our Grammys.

That record helped the band continue to take enormous steps, being one of the first Canadian reggae groups to headline festivals worldwide, sharing mainstages with the likes of Coldplay, No Doubt, Damian Marley, Ben Harper, etc.

During the second week of tour, we were in Leeds. I remember the guys getting the call. They stood together talking on a cell phone to their manager; then began to exchange hugs. I leaned over to Eon and asked what had just happened. He said Street Gospels had just been certified gold. He then went on to say that in Canada a gold record only meant selling 50,000 copies. It was Eon’s way of downplaying the achievement, and to quickly remove any hierarchy separation between the people in the band and the team that supported it. 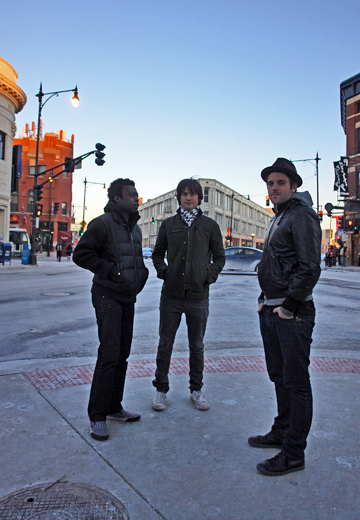 That’s how the Bedouin guys were- they were always humble around their crew. They were never flashy about their achievements, but I could never help thinking I was just seeing a piece of the real story. I was not in the inner circle; I just woke up early before soundcheck to load in their gear and stayed late to carry it out. I never asked too many questions, just enough to show that I had aspirations of my own in the music industry.

Near the end of the tour, there were a few moments when Jay finally let me in just enough to give me sense of what was going on in his head; what it was like to be a bandleader and make decisions that affected the people you cared most about. He shared his wisdom with me a few times in between pub closing and bus call and I’ll never forget his takes on what it meant to be a touring reggae band and how he related what they did to the scene.

It’s been a number of years since those conversations with Jay and the quotes below are my own interpretation of what I remember him telling me.

#1 – Context: Bedouin Soundclash was purposeful with their look; it was a big part of their brand. They dressed more like an indie punk band than a reggae act. 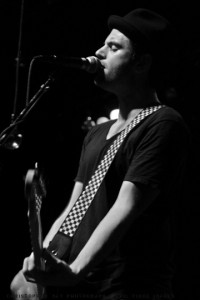 Jay: We play reggae music, but we don’t dress like rastas, and we don’t dress like the California bands. No flat brim hats or baggy shorts; we don’t want to look like Slightly Stoopid.  No dreads; we don’t want to look like Soja. We are not into that stuff. We want to be able to reach mainstream audiences, to be acceptable and supported by rock stations and pop culture- so we dress like punks. We look up to The Clash. We play reggae, but look at me- look at my hat, my guitar strap, my jeans, my jacket- dressing like a punk is acceptable for mainstream to grab onto us, and we do that on purpose. This is our brand.

Jay: We choose to take this tour, and do it this way, on a double decker bus, with a spread of good food and drinks in the green room every night. It was our decision to bring out a lighting engineer (Max), Goodwin on keys, Mike, Serge, Nunya, and you. It’s more expensive to tour like this and every per diem we pay, every extra hotel room, flight, every crew member’s paycheck… it is all coming out of our money. If the shows don’t do well and the tour loses money, it’s the band who is losing money. Everyone working for Bedouin will get paid, but me, the lead singer, I might not get paid, same with Eon and Pat. But because of my publishing, I could take the next few years off and still be able to live well.

Jay smiled, paused, and began talking about something else. It wasn’t until I started my own management company that the full weight of what he was talking about sunk in. The reason I chose to tease this record this week is because in so many ways Bedouin Soundclash’s success, and to a certain extent their philosophy, foreshadowed a lot of what’s happening now, when roots reggae is about to get hit by the next crossover wave. When NY Times writers are name-checking J Boog and L.A. Weekly writers are talking about The Expanders, you have to feel like something big is about to happen. Let’s all remember where we came from when we’re high-fiving on the way down the wave.

← Smoke on the laser/Let’s kick that Mexican’s ass