Rootfire World Premiere: Through The Roots “Bear With Me”

“Bear With Me” feels right at home with Through The Roots’ blend of tightly produced reggae/rock, occupying similar sonic terrain to the band’s 2013 Zombies Remix EP, which showed off spot-on production and featured driving synth lines over an electro-roots riddim. Incorporating heavy doses of ear candy at every breakdown and buildup, the song’s effect is perhaps best described in Rachmany’s lyrics, “Brace for the storm that’s coming, I love who you are becoming.” It’s about breaking through, whether in life or relationship. Is there a difference? 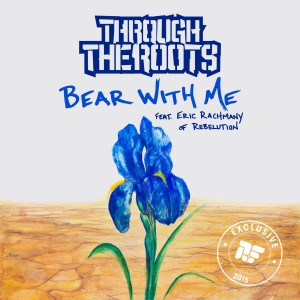 When I asked him about the chance to collaborate with Rachmany and Live Animaux, TTR’s Evan Hawkins had simply this to say: “Through music, we all work to give people something to turn to, something to help keep people positive. It’s amazing to be able to do that along side your good friends who are about the same vision. We are honestly spoiled.” Hell yes.

At Rootfire, we’re always stoked to see powerful collaborations across the scene keepin’ the musical gene pool fresh and clean. “Bear With Me” drops on iTunes Feb 3rd, but it will be available on Rootfire.net as an exclusive world premiere from Jan 30.

← Throwback Thursday: Peace In A Time Of War

TTR! Y’all are still doing it big with this cut! One Love!

Do you mean to have the link downloadable?