This story is about Renee, a mother of five who connected nearly 1,000 fans all in support of bringing The Green to New Zealand. 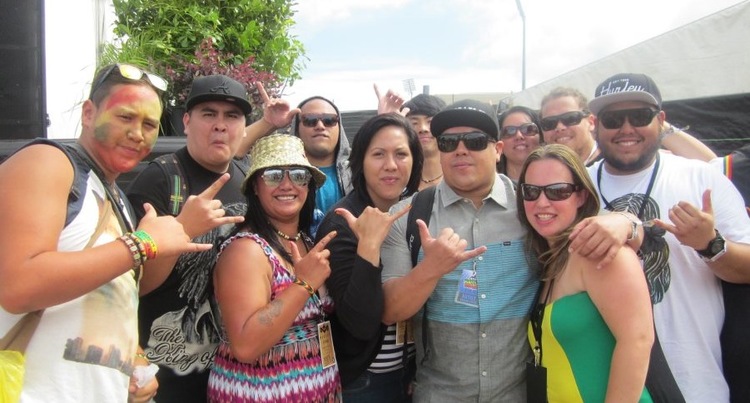 Renee and her family with The Green in New Zealand.

For the last few years we have worked to build momentum for The Green in Aotearoa (New Zealand). Ranging from album distribution, to hiring radio pluggers and publicists, to sending promotional t-shirts, we have tried to spread The Green’s music and good energy around the country. Although sales were modest, it appeared that our work was paying off: The Green’s music was being favorably reviewed in NZ’s largest newspapers, and radio stations were requesting interviews with the band.

At one point we received an offer for a three-week tour of the country, but soon thereafter the offer fell flat and we lost contact with the promoter. This same story of hope followed by disappointment happened two more times in 2011-2012. We knew The Green had a scattered fan base in the country, but without a tour it would be hard to connect the dots, build momentum, and bring people together. We temporarily gave up hope and decided to try again later, once a new album was released in 2013. But that all changed when one New Zealand woman and her family took it upon themselves to publicly share their support of the band and inspire others to do the same.

*All text in italics is from Renee Akurangi-Fitzell. It was edited with her permission to help share the story with you.

We are pretty humble people, passionate about our community and our culture. My husband and I have five children and live a simple life. Raggamuffin Festival is the highlight of our year. We eagerly await the lineup, and hope that bands we love will be on the bill. We spend months saving for our tickets and organizing babysitters. This year we even decided to bring out our teenage niece and nephew with us.

The roots/reggae scene is huge in Aotearoa, amongst both the young and old. Reggae artists not only from NZ but also all over the Pacific regularly gig throughout our country. In addition to Raggamuffin Festival, we have Roots Dub Reggae Fest, Exodus, East Coast Vibes, and many others.

At parties we would always listen to The Green’s music and our friends would say “The Green should play at Raggamuffin,” so my husband and I came up with an idea to try and make it happen.

One night I started a Facebook page called “Aotearoa Wants The Green,” added my two cousins as admins, and the three of us posted our favorite songs by the band. We sent links and invites to our friends and they began to spread the word.

Around the same time that this fan page was created, Raggamuffin Festival reached out to The Green’s booking agent and expressed interest in the band. However, they did not offer any assurance that they would seriously consider The Green for the festival.

Looking for any additional assets that I could use as leverage, I shared the link to the “Aotearoa Wants The Green” page with the festival organizers, along with a short note that basically said, “Look, you can see that The Green has fans in NZ, here they are.”

To everyone’s surprise, the promoter made a post from Raggamuffin Festival’s official Facebook page that said “Do you want to see The Green at this year’s Raggamuffin Festival? If this page www.facebook.com/AotearoaWantsTheGreen gets 500 Likes we will bring them to the festival.”

What happened next is amazing.

People started commenting on the post and within five hours hundreds of comments were written. Conversations arose and began to spread from those comments, and as a result the fan page received more than 500 Likes in less than 24 hours. The Green stayed awake all night, texting each other screen shots of the page, and in the morning they celebrated when it broke 500 Likes. The next day the band and I discussed what it meant: Did a social wave for change actually happen? This moment was a turning point that continually shapes how we strive to connect with fans, and showed us that it is our responsibility to support and empower the band’s fans to participate and connect with each other.

When asked about this moment, Renee writes:

For Raggamuffin organizers to notice the page, and to be able to see how popular The Green is in Aotearoa really blew us away. I don’t think we ever lost excitement during this journey. If anything it has inspired us in other ways, and has truly been life changing. We hope to inspire our family and teach them that anything is possible, and that pursuing an idea whether or not you think it will work is truly rewarding.

The success of the page has inspired us to pursue another idea. We stared another Facebook page called “Pacific Roots Reggae” with the aim to promote and inform roots reggae fans about artists from around the Pacific, festivals, tours, album releases, and much more. We want to support up-and-coming bands and raise awareness among festival organizers.

Last weekend, Renee, her husband, cousins, niece and nephew all spent the day with The Green at Raggamuffin Festival.