Whether we admit it or not, we all claim ownership over the music in our lives. We do it all the time! In a club we might say, “this is my song.” In our cars, no one ever sings the songs as well as we do. The music in our lives creates unforgettable moments for us fans and music lovers to cherish for a lifetime. I believe with my whole heart, regardless of where ever you think we go after we die, music will be with us. Music is an eternal element, an essential element and an everyday necessity. We own it, it’s OUR music, and most importantly it is our story.

I first saw The Slackers when I was about 17. I remember driving to Wayne, New Jersey to see them play at a venue called Skaters World. Yes, it was a roller rink that put on shows. It was one of the few places that would actually put on high quality punk and ska shows. At the time, I played in a ska punk band myself so Skaters World was my weekend hang. In my teenage mind it was heaven. I had found community, a scene that I could be a part of and contribute to. In our scene it didn’t matter what ruled the airwaves or how much money you had. Rather passion, DIY ethics and acceptance were of the utmost importance. It’s of no shock to me that Skaters World is where The Slackers would befriend a 17 year old me, who would later go on to book The Slackers on his own shows at Skaters World (I admit selfishly because I couldn’t get enough) and invite him into their quirky, unique, psychedelic Jamaican Rock & Roll adventure. 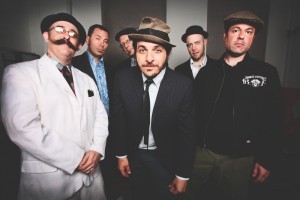 The first tune I heard them play live was “Cooking For Tommy” an infectious instrumental, which paid tribute to Tommy McCook of The Skatalites. I couldn’t stay still if I tried. The rhythm and the groove owned me. Together they possessed a power over me. The Slackers were like this collective Holy Ghost and their spirit had set its roots deep within my soul. From that moment forward The Slackers owned me. They were “my band,” they were playing “my music” but THEY owned me. Their music and personalities had won me over and their songs would become my sound track for many years to come. Fast forward a few years later and I had worked up enough nerve to start my own band, Westbound Train. We would go on to play our very first NYC show opening for the Slackers at The Wetlands (RIP). It didn’t take long before we were opening for them all over the east coast and as we grew, we were playing shows together all over North America. The Slackers taught us how to find our sound; they challenged us to write better songs and be a better band. Luckily for me they were more than just mentors they became my friends.

I love working with my friends. It’s with sincere gratitude that I’m able to approach being a part of this new self-titled Slackers release. 17 years later, 34 year old me is humbled to be the co-owner of Rarebreed Recording Company, still supporting the music I fell in love with when I was 16; still supporting the band I saw live for the first time when I was 17 and lastly still living with the same passion and DIY code.

This newest Slackers record is my favorite to date because I can hear my friends being themselves while still taking their music to new heights. The Slackers are an extraordinary band that has a natural ability to transcend genre and time. The Slackers style and sound run so deep; the song writing is impeccable, the arrangements are spot on and the vibe is perfect. No matter how much The Slackers evolve they will always sound familiar and they will always own a piece of my heart and soul.

Obi is the lead singer of Boston based ska band Westbound Train, as well as the co-founder of Rare Breed Recording Company.

Art and A Simple Song →
wpDiscuz
We use cookies to ensure that we give you the best experience on our website. If you continue to use this site we will assume that you are happy with it.Ok