THE CONFEDERATIONS CUP
The Confederations Cup Tournament has ended in Brazil, but the work has just begun. Brazil handled Spain astonishingly too easily, with intangible help; as many of the referee’s calls went their way. The match was owned by the home side from the very beginning, and they opened the scoring in the second minute. Italy set the template on how to defeat Spain and the Brazilians enacted it. In the first half, it was incredible to watch Three Brazilians sprinting to every ball that had One Spanish player working it. The hosts dominated every part of the first half, and were rewarded with a Two – Zero lead at halftime. Even down two goals, the Spanish are certainly still in the game, and the World was ready for them to display their skill. Well, it only took two minutes into the second half for the Brazilians to secure a Three to Zero lead, and ultimate final score. Yet, another training ground goal that opened the Spanish defense way to easily. Later in the second half, Sergio Ramos had a chance to get one back for Spain on a Penalty Kick, but predictably missed the net. At least I predicted it with Coach Dean. Why was Ramos taking that dead ball anyway? Nevertheless. 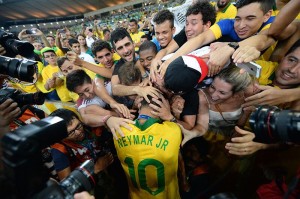 It was a match that Brazil had to Win. Everyone knew they would win. But Did We? For 90 Minutes the World was at Peace, as The Beautiful Game was just that. A Globally Dominating Team the Spanish got Dominated by the Brazilians. The Seleção have not lost a competitive home game since the mid-1970’s. That is an INCREDIBLE statistic, and frighteningly long streak. I am very happy that Brazil won, if not for only one reason: The Brazilian people can celebrate their cultural identity as World Champions for another year. They won their own tournament and game. Okay, I understand Spain are still World Champions, as they won the last World Cup, but c’mon this was a serious handling by Brazil. Furthermore, Italy had every chance in the World to beat the Spanish as well. Futbol can be a cruel game, and it was yesterday for the La Roja. 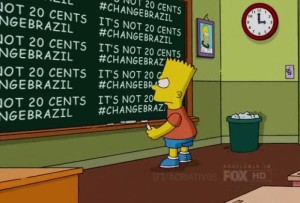 Simply because the futbol competition is over, does not mean the battle or event has ended. The Brazilian People have started something that everyone must finish, with Justice. Now that word has many different definitions and applications, but the most important to me is Equality. If everything is equal, in spirit or reality – fairness happens. Over the next year Brazil will experience many growing pains no matter how these events continue to sort themselves out. The climax is still on edge, and only the Gods know how this will turn out. We will continue to discuss Brazil and The World Cup over the next 346 days. Please stay updated on this matter here :
http://www.dcomercio.com.br/
http://www.bbc.co.uk/news/world/latin_america/
http://online.wsj.com/article/SB10001424127887323873904578570244226440374.html

Congratulations to Brazil and all the teams who competed in this year’s Confederations Cup, especially Tahiti. It was a wonderful tournament to watch, a brilliant appetizer of futbol for next year’s World Cup Tournament. It is also a prelude of things to come in regards to Brazilian rebellion and uprising. With just under a year for all sides, the strategical planning will be calculated and steadfast. Please be safe Brazil. The World Loves You.

Relocating The World Cup 2014 to Australia and New Zealand
Last week I discussed the notion of relocating the World Cup 2014 to Australia and New Zealand Co-Host. In all likely scenarios the relocation from Brazil will not occur, but I wanted to illustrate that in regards to stadium infrastructure, the World Cup could take place in Australia and New Zealand with a few FIFA rules probated like size of stadium, team travel, and fixture scheduling. Australia could use six existing stadiums : Melbourne Cricket Ground or Etihad Stadium (Melbourne), ANZ Stadium (Sydney), Suncorp Stadium (Brisbane), AAMI Stadium (Adelaide), and Patersons Stadium (Perth). New Zealand would use two stadiums : Eden Park (Auckland), and Westpac Stadium (Wellington). A couple of these stadiums have capacities well below FIFA Standards, but does that matter? Westpac Stadium in Wellington holds 38,000 people – would FIFA rather have a packed Westpac, or a half-full Castelão in Fortaleza? Three of the selected stadiums in Australia are ovals, which means they are suited for Cricket and Australian Rules Football, but without much turmoil, I think a football rectangle could be painted inside that humongous pitch.
Another sweeping change would be that all of the Eight Groups of Four Teams stay located in their “Host City.” So instead of Brazil playing their group matches in Syndey, Perth, and Auckland for example, the team would set up a base camp in one city, and focus on Futbol, rather than travel, hotels, and red tape.
For the Knock-Out Stage teams would travel to the stadia that were selected best suited to host more matches. The Two Semi-Finals could be in Auckland and Melbourne, and the Grand Final could be hosted at the 100,000 person Melbourne Cricket Ground. That would be a sight to behold. I know personally that Aussies and Kiwis can throw tremendous parties, while simultaneously enjoying them. It would be a Beautiful World Cup.
This is a very brief peek into what the World Cup in Australia and New Zealand could be. That’s not to say there wouldn’t be infrastructure updates, and citizens against the instability, but let’s not ruin the idea yet. Smile.

MLS
There are several good matches this week in MLS – but I will stick with one: Chicago Fire vs. San Jose Earthquakes on Wednesday, July 3. Unfortunately the match is not televised, but one might be able to find a close circuit feed somewhere. The quality of MLS Soccer has improved greatly over the past five years, and the league itself is becoming very enjoyable to watch.

THE GOLD CUP
The Gold Cup, a tournament of National Teams begins next Sunday. The Gold Cup is a regional tournament for CONCACAF, and this year’s teams: United States (hosts), Mexico, Canada, Cuba, Trinidad and Tobago, Haiti, Martinique, Costa Rica, Honduras, El Salvador, Belize, and Panama will battle in two groups of four. This is always a very exciting tournament, and I really enjoy watching my home Federation Compete. This is Belize’s first appearance in the competition, so they will be the beautiful minnow to keep our eyes on. The United States and Mexico are early favorites, but that goes without saying for CONCACAF. One day, that will change. Teams like Costa Rica, Panama, Honduras, El Salvador, Trinidad and Tobago, and even the hockeycentric Canadians are getting better.
The Gold Cup Fixtures begin on Sunday, July 7, 2013 : Canada vs. Martinique + Mexico vs. Panama, both games live from the Rose Bowl in Pasadena, California.
http://en.wikipedia.org/wiki/2013_CONCACAF_Gold_Cup

MUSIC
For this week’s music inspirations, I will focus on CHEGA (Não é pelos vinte centavos) IT ARRIVES (It Is Not About The 20 Cents) an incredible homage to the Brazilian Uprising, and a Rally against the Violence and Vandalism. Written and Performed by Seu Jorge, Gabriel Moura, e Pretinho da Serrinha.

Catch me next week protesting American Unemployment outside Red Bull Arena in Harrison, New Jersey.  Unfortunately just kidding, I will be hustling for a job, man. I don’t have time to protest…. yet.

Coach,
As usual great info and insight into next year’s world Cup, Gold Cup and MLS….