Tag Archive for ‘My God’ 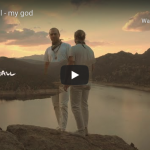 Rootfire favorite Trevor Hall, who appeared on HIRIE’s Wandering Soul, the #1 Billboard Reggae album released Rootfire Cooperative in 2016, has a new album out tomorrow called IN AND THROUGH THE BODY. Rootfire is pleased to premiere the official Meditation video for “My God.” Trevor’s meditations are… Read More