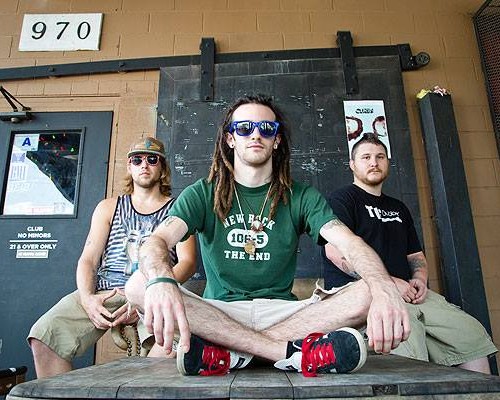 Sun-Dried Vibes provide a fresh twist to the reggae/rock genre with their high-energy live performances that crank out infectious sing-a-longs laced with a positive message. SDV will be heard, since their inception the group has played around 275 dates a year. The trio of road warriors quickly became a festival favorite with two full length albums under their belt and a long list of tour history that grabbed fans from all demographics. In 2014 one of the most progressive promoters in the world took notice and added SDV to the major festival ‘California Roots: Carolina Sessions’ sharing the bill with the Rebelution, Matisyahu, Collie Buddz, Giant Panda Guerrilla Dub Squad, Katchafire and more in Wilmington, NC.

2015 is full of momentum and new opportunities. SDV will set out on a national tour this summer highlighted by an appearance at the largest reggae music festival in the world. California Roots Music & Arts Festival will take place this May in Monterey, CA and the group is humbled to share the bill with SOJA, Steel Pulse, Dirty Heads, Chronixx, The Roots and many more. Sun Dried Vibes will also start working on their new album in San Diego this June.

The ensemble joined forces in the July of 2010 in Rock Hill, SC. On August 28th 2011 Zach Fowler (Lead Vox/ Gtr), Evan Tyler (Bass), and Alex Winchester (Drums) released ‘Give Thanks’ as their debut album and began filling up rooms along the east coast. On April 8th, 2014 their sophomore album “Back2Square1” debuted on the iTunes Reggae Charts at #6 and the hit single “Young One” ft. Jeremy Anderson (TreeHouse) was featured as the MP3 Leak of the Week by The Pier (www.thepier.org).

Sun-Dried Vibes took home back to back awards for South Carolina’s Rock Band of the Year in 2012 & 2013 voted on by the SC Music Awards and were voted Charlotte’s Best Local Band 2012 by the Readers of Creative Loafing.

It’s not a secret that the Sun-Dried Vibes family includes a very loyal fan base, the higher ups have definitely taken notice. SDV has had the pleasure of supporting major acts of all genres including The Dirty Heads, 311, Slightly Stoopid, Ballyhoo, The Movement, Passafire, The Expendables, Natural Vibrations, The Aggrolites, The Supervillains, Less Than Jake, AWOL Nation, Neon Trees, The Nappy Roots and many more.