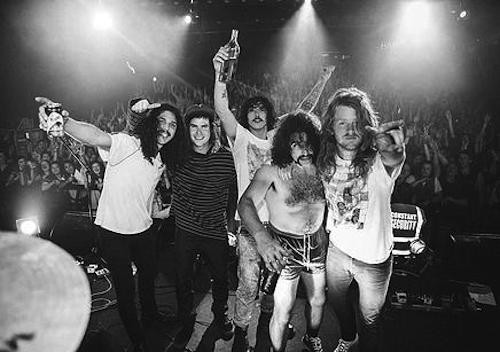 Since their 2008 formation, the boys sold out legendary venues such as Qudos Bank Arena in Sydney (which typically hosts the likes of Drake and Fleetwood Mac), Brixton Academy in London, The Fonda in Los Angeles, and other hallowed stages on numerous packed global tours. Throughout the world they manage to sellout shows by engaging their rabid fan following through social media with nothing else needed.

Four albums deep by 2020, the friendship still fuels everything.

“Paddy and I met Diz busking on King Street,” recalls Beaks. “We all came together around music. I had a cousin who was 30 at the time. I had no idea what he did, but he was always like, ‘If you ever need anything, come to me. I’ll sort you out’. When I told him I was thinking about starting a band with Paddy, he yelled, ‘That’s a fucking good idea!’ The next day, there was a drum kit on my doorstep. Now, that I look back on it, I think my cousin might’ve been a drug dealer,” he laughs. “Anyway, we just got together and started jamming. We didn’t think it would go anywhere though.”