Stick Figure – Touring Europe One Airbnb At A Time

While attending the Stick Figure show at Brooklyn Bowl this past November, I ran into my friend Joe and his wife Tina. He had been introduced to their music through our group of friends semi-recently and quickly became a huge fan.

“It has been many years since a band has affected me in the way they do,” he told me. “I don’t go a day without listening to them.”

I know there are a lot of other Stick Figure fans that feel similarly. This band has something intrinsically unique about them and it has fueled their meteoric rise in popularity.

Joe continued, “My wife and I like different genres of music, but this is one band that she has connected with as much as me, which makes our lives a bit more special.”

This mutual passion for the band prompted Joe and Tina to travel up from central New Jersey to Williamsburg, Brooklyn on a midweek night, a fairly long drive especially when factoring in the omnipresent NYC traffic. Wanting to have the freedom to throw back some beers, let loose and enjoy themselves, they decided to take off from work the following day, book a hotel room and make a “date night” out of it.

They were tremendously excited to see Stick Figure for the first time and spend a fun evening in Brooklyn, but Joe lamented that he had to drop over $300 on a nearby hotel room in trendy Williamsburg.

“You should have used AirBnB!” I said. “You could have saved a ton of money and probably found a sweet place right in the neighborhood.”

I was surprised he hadn’t heard of AirBnB yet, as I assumed by now it was on everyone’s radar.

“Sort of like an Uber for hotel rooms” I described. “In fact, Stick Figure just used the service for their entire European tour.” 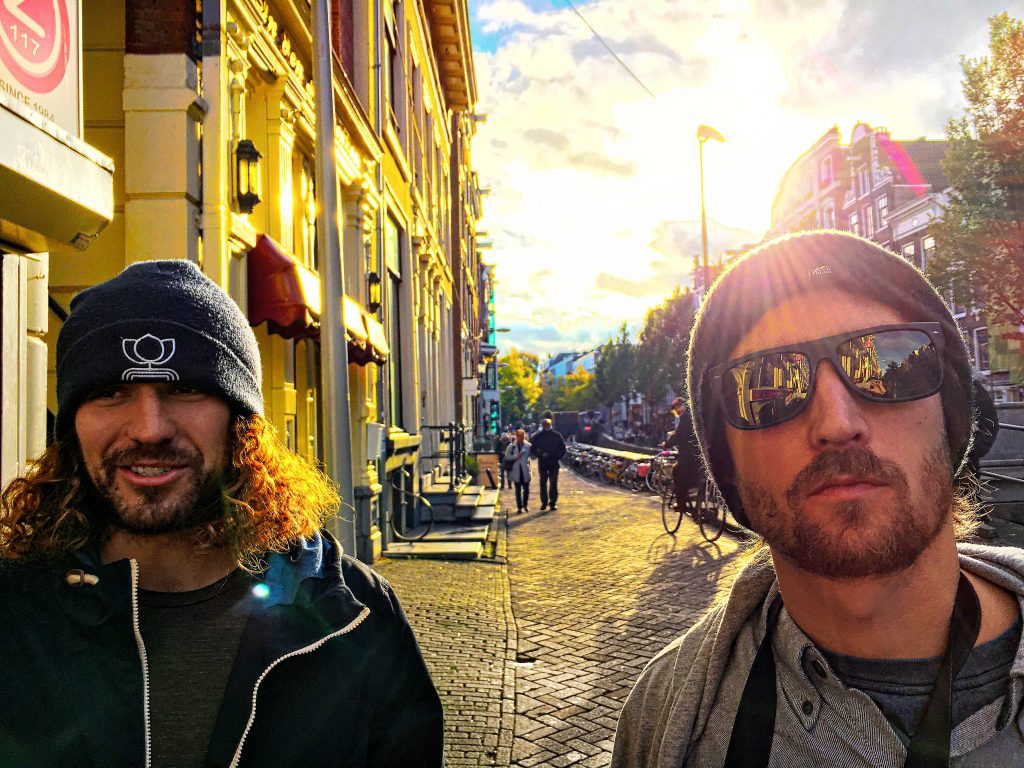 It’s true. The band and their management decided to try something new for their fall tour through Europe with Jamaica’s Raging Fyah. Rather than staying in hotels over the course of their almost month-long journey, the band and their crew, a total of nine people, (plus maybe the most famous part of their entourage, Scott’s dog Cocoa) rented houses as they drove in a crowded van throughout western Europe. 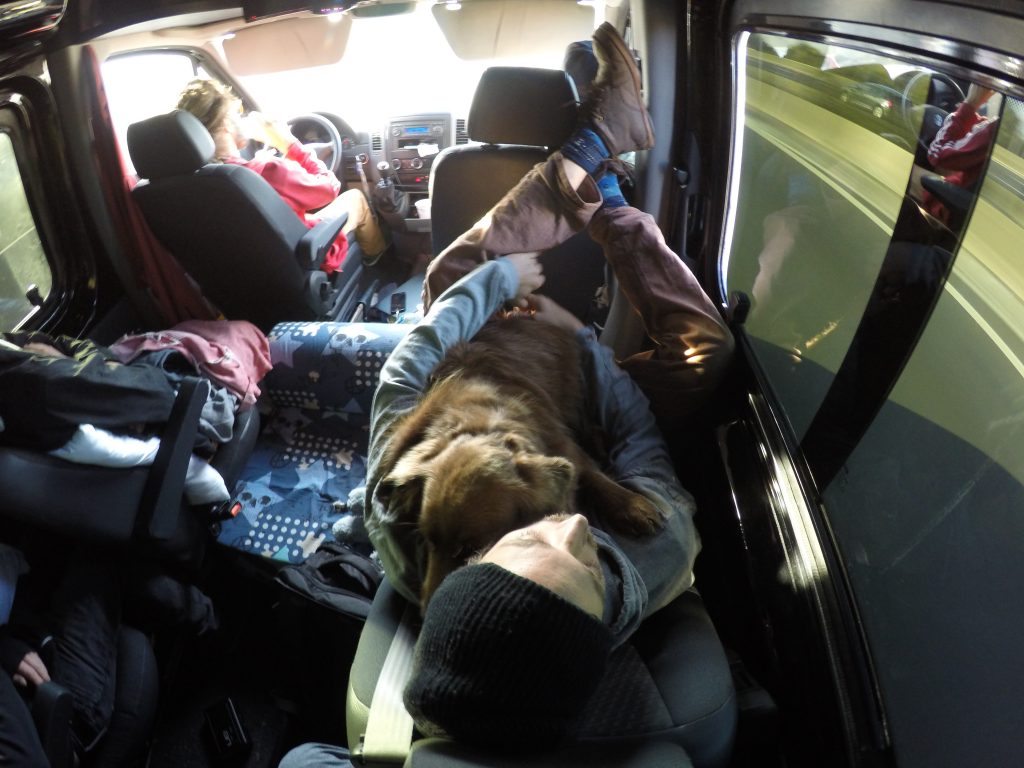 For those of you unfamiliar with AirBnB, the service, accessible through their website or app, connects travelers with hosts who provide private lodging. Often, the lodging is the owner’s primary place of residence and in fact, some rentals require travelers to share the living space with their hosts. In other cases, owners have purchased properties with the sole purpose of renting them out for short-term stays using AirBnB.

For travelers, there are many advantages to using AirBnB over hotels – not just the savings.

In Stick Figure’s case, tour manager Brandon Prescrile, who single-handedly booked every unit they had resided at throughout the tour, wanted to keep the group together. Not only was it easier for him to manage the entourage with everyone sleeping in the same place, but the communal living amongst the band and crew also allowed everyone to bond more closely and helped keep everyone at ease while they visited places they had never been to before, far away from home, in a different culture where languages other than English were spoken.

Keyboardist Kevin Bong, aka “K Bong,” said “I’m proud of the group we have. We mesh well, there’s good balance and chemistry.”

In addition to simply being able to spend their leisure time together when not working or driving, the properties at which they stayed provided much more living space and creature comforts than a typical hotel room would offer.

“Like laundry,” said drummer Kevin Offitzer, who was one of few members that had been to Europe before. “Some of those European hotels are pretty rough,” he said. “They cram as much stuff into the smallest space imaginable. Everything is just so much more cramped, like maybe they got like six inches between the bed and the shower curtain or something like that. But the homes, even the ones in the city, were more comfy.” 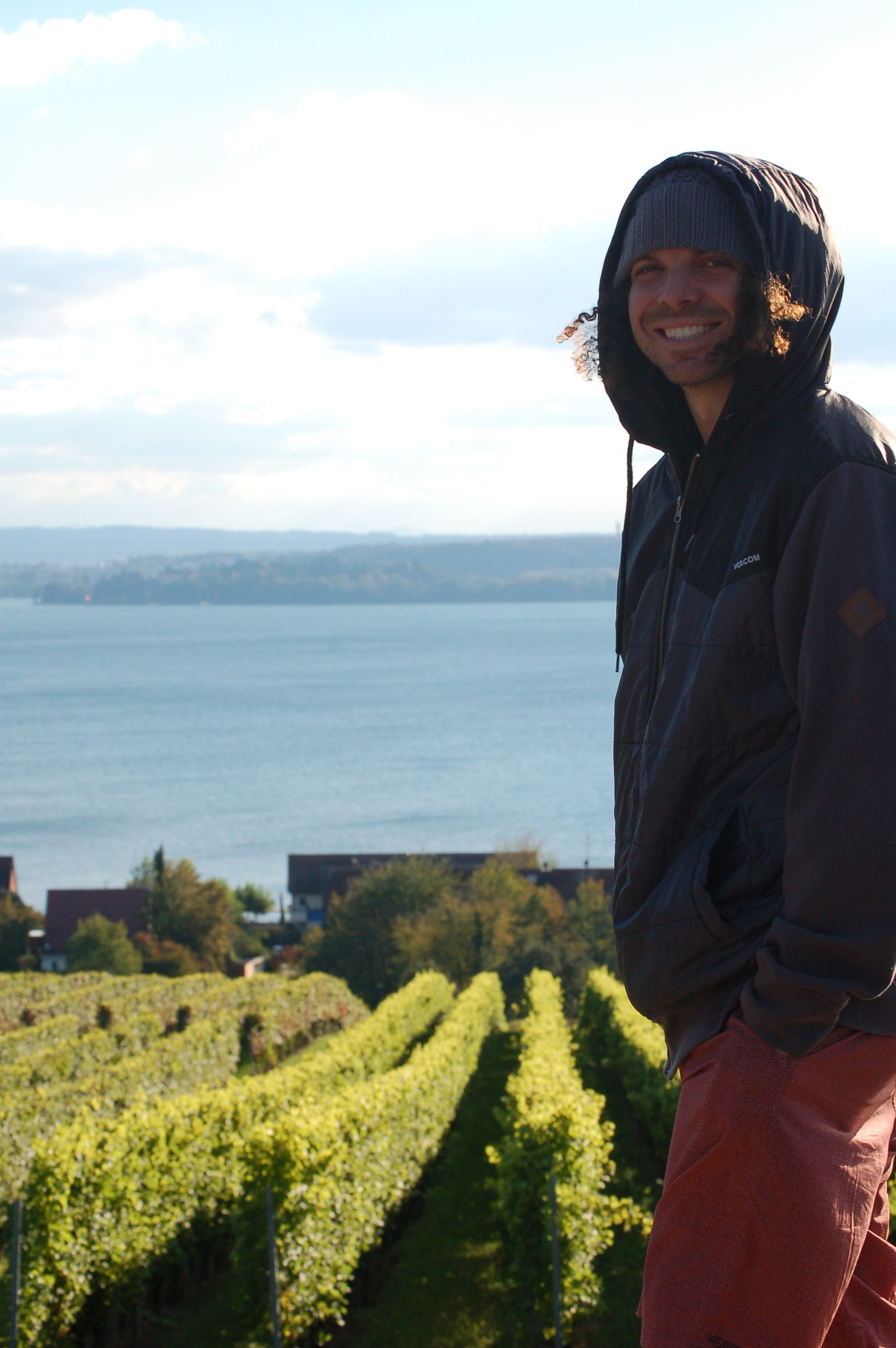 At some destinations, such as Madrid, Brandon booked a property right within the city center, which allowed the guys to step right outside and enjoy the urban action. In other cases, like when they stopped to rest overnight while in the midst of driving their jam-packed van over some of the longer distances, he selected properties in more suburban or even rural areas.

Besides the locations, the décor and vibes also varied greatly, from brand new units furnished with IKEA-type furniture and granite countertops to a chateau in the French countryside which had converted its barn into a bunch of artist lofts with a ton of really interesting artwork on the walls.   In Cannes, they stayed at a beach style mini-mansion with really tall ceilings and art-deco checkered floors but in Germany they found themselves at a farmhouse on an apple orchard.

“There are multiple vibes with AirBnB,” Brandon explained. Some places mimic the experience of staying in a hotel —   modern, clean and devoid of any personal touches. “Then you have those places where you got the kids’ pictures on the refrigerator and Legos lying on the floor and the people are just staying in a hotel or with some friends so they can make $200.”

“Sometimes I would get the key and then immediately have to go to sound check without even looking at the property,” Brandon related, “So we would roll up to the place at like 1 am and that was everybody’s first vision of it, like ‘What did Brandon get today?’” 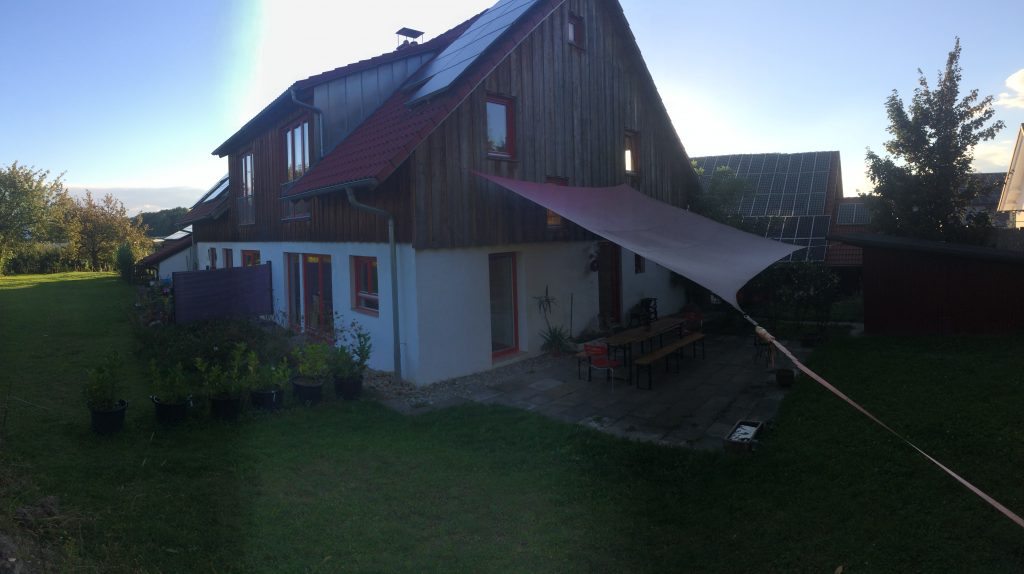 Brandon had confirmed some of the units before they even left for Europe, while others he booked a week in advance and some even only a few days out. “I tried to leave room for us to roll with the punches and have a sense of freedom as to what we wanted to do on our off days,” he explained.

With only about five days off during the entire tour, the band had to decide how they wanted to spend their free time. “We were faced with A) Resting – giving our bodies the rest they need. Or, B) We’re in Barcelona, we’ve never been here before, are just going to sit on the couch and rest or go see the cathedral? It was very fast-paced but we made it work.”

Perhaps the best aspect of using AirBnB to tour Europe was the fact that it allowed the band to get a better taste of what living in the country is actually like. Guitarist/keyboard player Johnny Cosmic said “When you go to a hotel, just being at a chain of any kind, like when you stay at a Hilton or something, you know what you are in for, the quality, etc. That predictability can be cool but at the same time it can get stale, because even though you are going to all these different places, you are seeing the same thing over and over again. 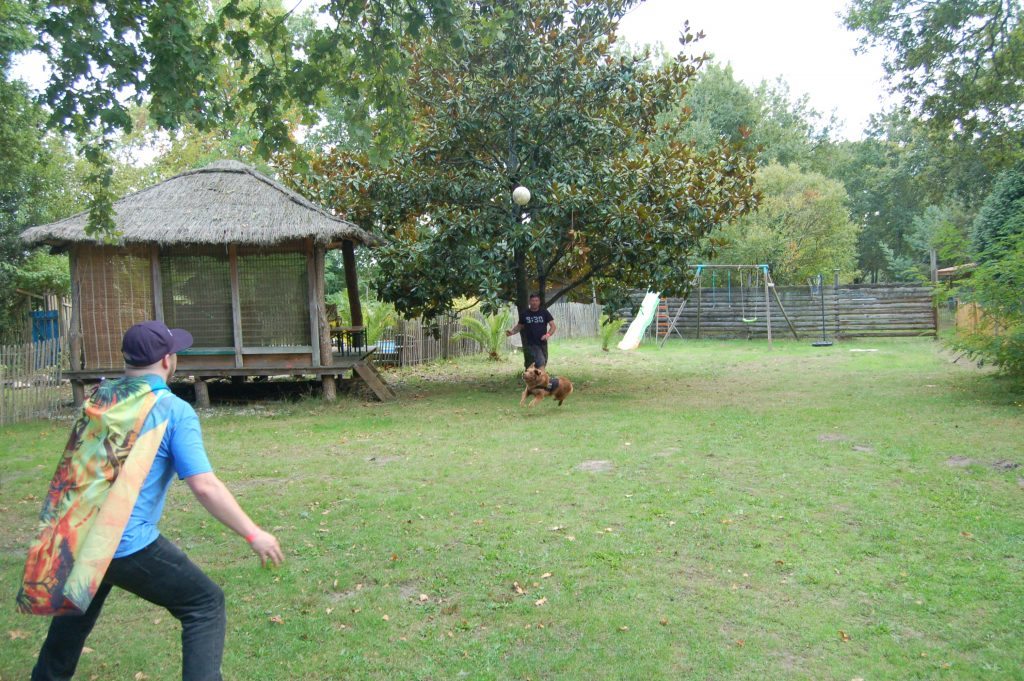 “One of the advantages of AirBnB,” he continued, “is that you get a sprinkle of the local flavor. You’re in a place that you don’t normally get to visit, and you’re staying in someone’s house, in a neighborhood, it really gives you a sense of the flavor of each community.   You walk away with a feeling that you really experienced a local slice of life.”

In some cases, that local slice of life could include encounters with the owners of the properties.

“We never did a shared housing situation, always had our private place,” said Brandon, “But sometimes the people running the guest house, they would come there and be kind enough to offer their knowledge of the area, or any sort of service they could provide. I think a lot of that had to do with them trying to get the best rating they could.”

Like most online travel, dining and retail sites, AirBnB relies heavily on user ratings – both the renters rating the properties as well as the hosts rating the guests. This system incentivizes owners to provide clean, nicely furnished and well-equipped properties and motivates guests to be on their best behavior.

According to Johnny, one of their fondest memories was staying at the chateau in the French countryside. The host was kind enough to make them all espressos. “It was such a perfect day — the perfect temperature, a golden, beautiful sun. Everything was shining and shimmering, we were all hanging out, enjoying each other’s company. The space played a big part in that. It was the vehicle for the good times.”

Brandon recalls another fun experience that came about from using AirBnB.  “This guy had an old dirt bike laying in the corner and our sound guy was like, ‘Hey, can I ride this thing?’”

“And the guy was like, ‘I don’t care!’ So he gets it fired up and we’re riding around the farm on this dirt bike… That was pretty classic.” 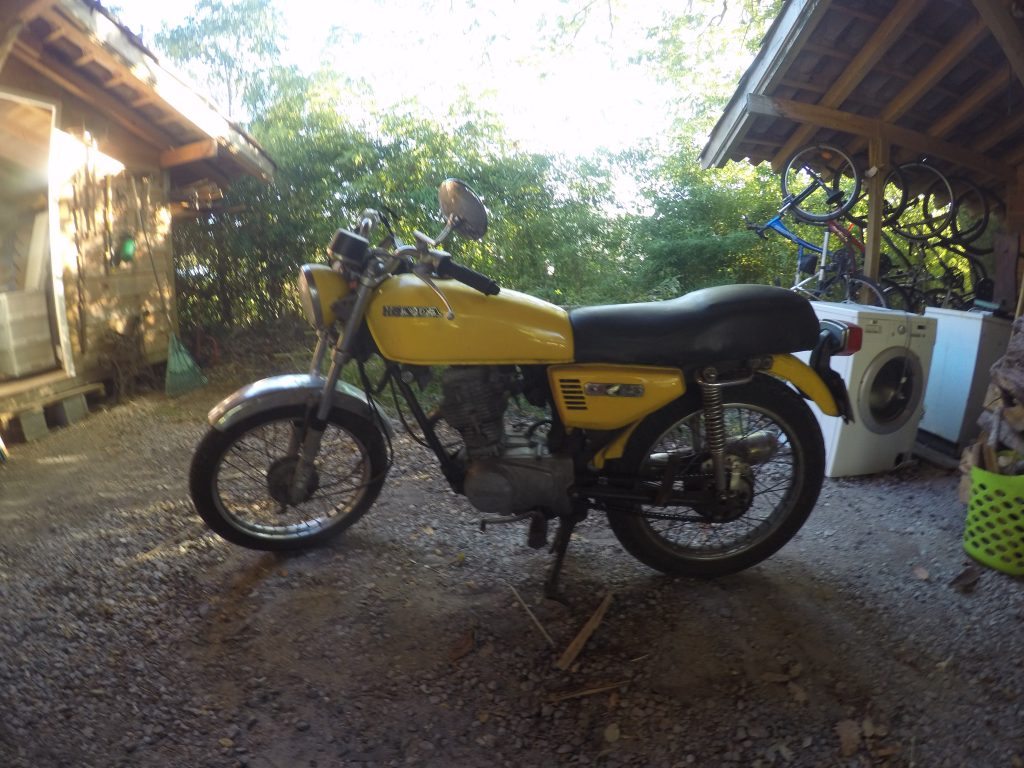 Another great experience that seemed to collectively resonate with the band members was meeting their host on the apple orchard in Germany, Nikolai. Johnny absolutely cracks up while recalling the quirky fellow. “He was a character and a half, he was something else,” he laughed. “A super interesting guy. He had a vending machine filled with German beer. We were all sitting around in the barn, chopping wood. That’s unlike any experience you can have while staying at a hotel. It made for some good stories. I think we will meet up in like 20 years from now and still be talking about this guy.”

Whether you are touring in Europe or traveling from NJ to Brooklyn to see a show, Airbnb is a great option for finding accommodations that offer the flavor of the region and hosts alike. 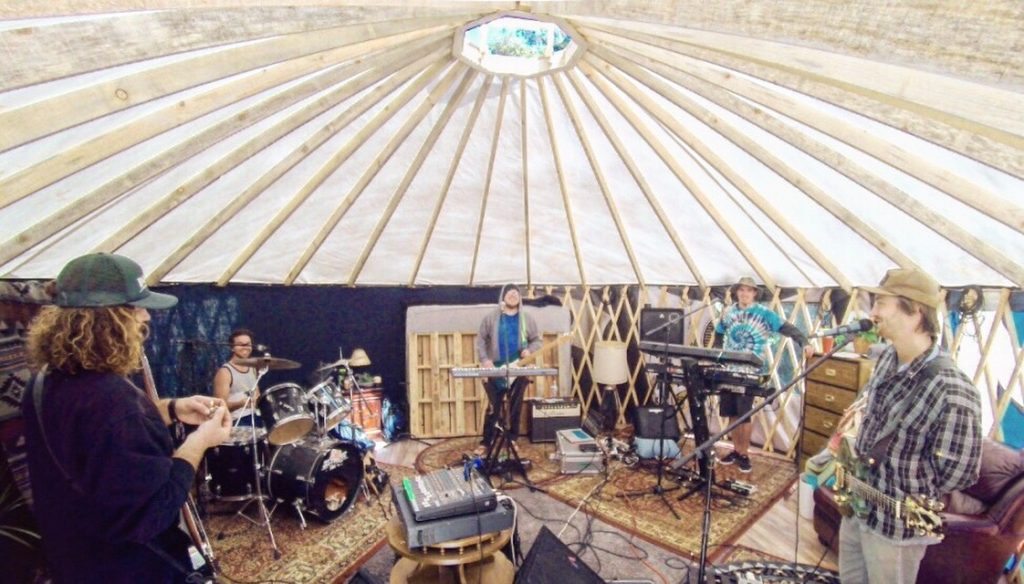 Photos used with permission and our appreciation to Tommy Sullivan, Brandon Pescrille, and Johnny Cosmic.

← RIZE OF THE MORNING STAR A Free West Papua Movement!

First Listen: Satsang – Just A Child →
wpDiscuz
We use cookies to ensure that we give you the best experience on our website. If you continue to use this site we will assume that you are happy with it.Ok