Imagine showing up early to one of the hottest up-and-coming reggae bands in the country’s set, only to run in to the frontman, pitch your guitar care skills and get taken up on your offer to serve as guitar tech. You hit the road and every show on that first tour is at one of the nicest clubs on the eastern seaboard, and every show is sold out. Fast-forward a year and you find yourself on the road in Brazil, where the band is playing for crowds of 10,000 or more. Now fast-forward just a little more and suddenly you’re no longer the guitar tech but the lead guitarist, shredding nightly before ever-growing crowds of dedicated fans. This may sound too good to be true, but this is exactly the trajectory that Trevor Young, lead guitarist of SOJA, found himself on in 2010.

At the heart of success in the music business there is an essential ingredient: good songs. Songs that people connect with, can relate to and that impact their life. SOJA has been bringing quality music from the heart of the American reggae scene for over two decades now, and it shows. From Grammy nominations to sold out concerts at premier venues across the country and world, the Arlington, VA reggae outfit is a beacon of accomplishment from within the genre.

Riding the success of their 2017 release Poetry In Motion, SOJA kicked off the American leg of the Poetry In Motion tour March 1. Two weeks deep into the run finds them headlining the main stage of Reggae Rise Up Florida 2018 at Vinoy Park in St. Petersburg, FL, joining a stacked lineup including the likes of Rebelution and Damian Marley over the weekend of March 16-18. In anticipation of their set at RRUFL2018, Rootfire sat down with Trevor to chat about the vibrant Florida reggae scene, the rising consciousness of American reggae songwriting and what he’s looking forward to most at this year’s Reggae Rise Up Florida.

Trevor Young: The majority of Florida is coastal and it has a lot of beach vibes, there’s a lot of people that go out for reggae shows there. There’s always a good energy in Florida, always good hype. It’s kind of a party state, too, which always helps.

RF: I experience this as I go around with Rootfire and with different bands I’ve toured with in the past, that as you go around the country people tend to really like reggae, but some places you go to and reggae is really part of the culture. People are informed on the roots, they know the songs and just have a more heightened awareness of the genre. Do you feel like Florida is one of those places?

TY: I feel like for the United States it is, definitely. You can kind of feel it as you go down the coast toward Florida. There’s also a lot more bands coming out of Florida that are reggae bands than in other parts of the east coast.

RF: Which is a pretty telling thing, because people are playing what they know. You were saying for the United States – where are some of the other spots you guys have played and it’s just like ‘damn, people know what’s up with the reggae vibes’?

TY: In Europe and South America reggae is just more mainstream, there’s a lot more reggae on the radio and it’s more in your face. You’re going to hear it like in a restaurant or somewhere else you might not expect it, especially as an American. It’s like ‘oh there’s our song, it’s on at the gas station right now’ or whatever. Part of it with reggae is that it’s kind of like revolutionary music in a way, and in some of these countries where people are really going through things, that music helps them get through it.

RF: I wonder, on a side note, as the social political scene in America gets more mainstream with social media, and with people being a lot more connected and vocal with their thoughts, I’ll be interested to see if the reggae scene in America is affected by that as more people are speaking out. We’ll see if that same kind of revolutionary vibe comes out with what they’re listening to.

TY: I think more reggae bands are realizing they can do more good with their voice in the scene. I’m starting to hear more conscious songwriting from a lot of the bands that are climbing the charts these days. It’s good that they’re realizing that they have that potential and power.

RF: Are there any bands playing at Reggae Rise Up that have been catching your attention?

TY: I really wish we were going to be there all three days, because there’s really a lot of bands I’d love to see. We have shows Friday and Saturday as we make our way down the coast. I love Reb, I love Tribal Seeds, Ozomatli, Easy Star. Damian Marley, I love Damian Marley, he’s just such a prolific songwriter. But looking at Sunday, Nahko, RDGLDGRN, I’m really looking forward to seeing those guys. Collie Buddz. New Kingston is a really, really cool band. We’re doing some shows with them earlier on this upcoming tour and I really like their new record and they have some really good tracks. I’m looking forward to seeing them on that Sunday.

RF: Is there anything else that you wanted to put out there?

TY: Always gotta shout out to the fans, they’re so good to us and if it wasn’t for them we wouldn’t be able to do what we do, so a big thank you to them. I wanna say what up to the other band members, looking forward to seeing all of you next week. Gonna kick this tour off, starting up north, a little bit in Canada, and then working our way down to Reggae Rise Up in Florida. It’s gonna be a great tour. 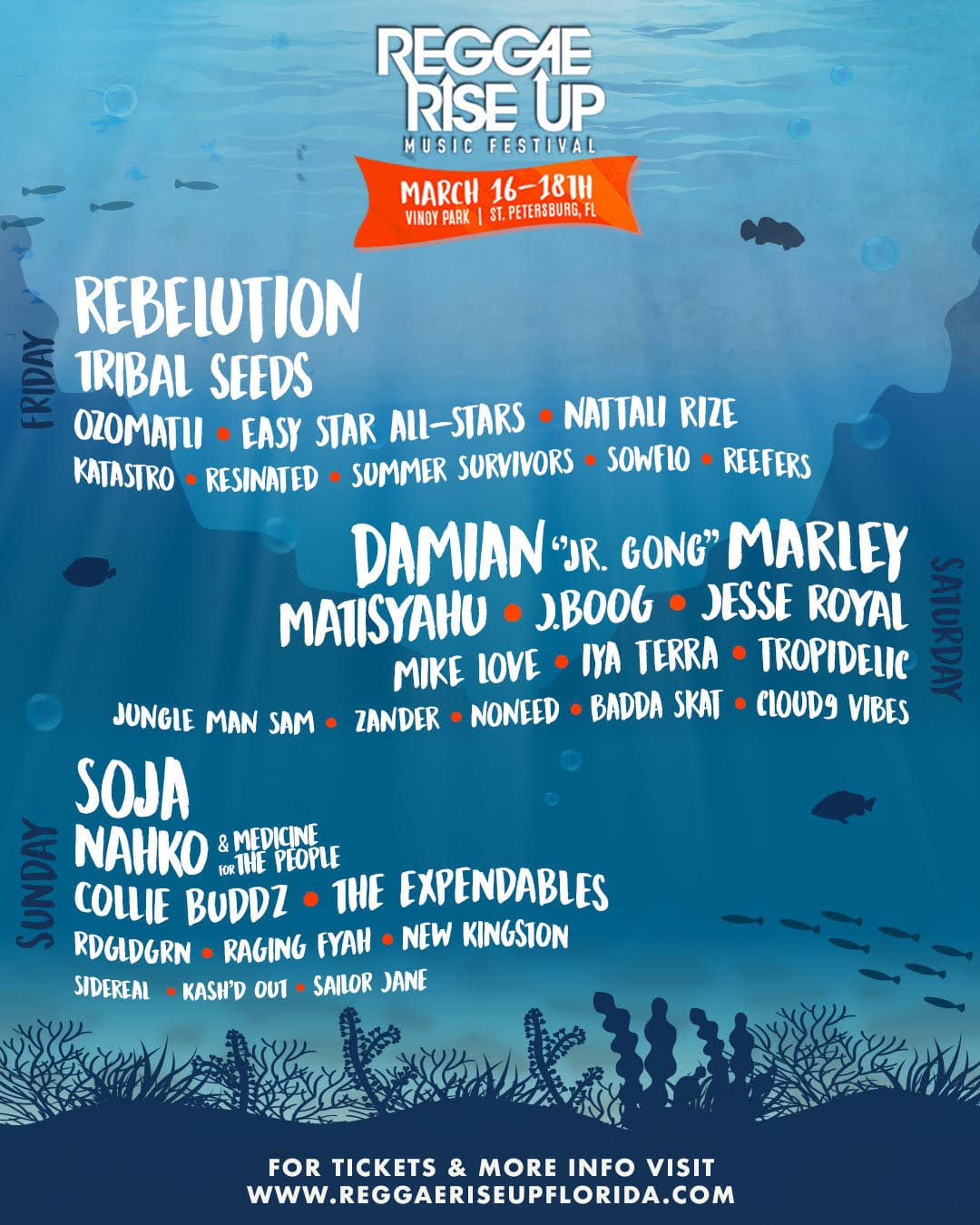 […] really going through things, that music helps them get through it.” read the full interview here. SOJA is headlining the main stage at Reggae Rise Up Florida 2018 on Sunday, March 18th at Vinoy […]