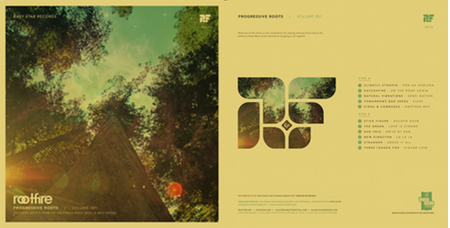 Order now and save! The first 50 orders get 20% off their entire store-wide purchase! Use promo code: first50peeps

At the beginning of this year we had an idea: why not connect with a bunch of bands we love at Cali Roots Fest? The first incarnation of the idea was to organize a pick up soccer tournament, with musicians and road crew all participating in morning matches on the festival grounds before the gates opened up. We would have pulled it off if the festival was not such a success… all 3 days of Cali Roots sold out in advance! We realized that with a capacity crowd there would be little to no extra space available and the soccer tournament would have to wait for another year.

So we put our heads together and came up with the next best explosion- a vinyl compilation!

Reggae music has a long history of compilations and anyone who scouts out used vinyl can find endless Jamaican reggae comps in crates at most record stores. But over the last 20 years that tradition faded away to be replaced by CDs, digital albums, and Spotify playlists.

This gave us an opportunity to bring back a reggae tradition: the vinyl compilation LP. Only this time the album would be released at the largest N. American event that celebrates the community which modern reggae music created, the California Roots Festival.

We set out digging through all the recorded music we could find from every artist performing at the festival. From Youtube videos, Soundcloud sets, Grooveshark, Spotify, iTunes, and the artists’ websites we dug deep to bring out a collection of songs that represented the music happening in all of our lives.

PROGRESSIVE ROOTS VOL. 001 was officially released at Cali Roots Fest (May 24-26), where we set up shop, and gave all the artists a chance to take a stack of vinyl out on the road with them this summer.

On July 16, the vinyl that remains will become available to fans around the world! It looks like we have about 225 copies remaining.

To celebrate, we added some additional amazing vinyl albums to the Rootfire store and are giving the first 50 orders 20% off their entire purchase from now until July 16.

ORDER NOW and enter promo code first50peeps to get 20% off your entire store-wide order!

Only 1,000 copies of PROGRESSIVE ROOTS VOL. 001 were printed. When this limited edition release sells out, that is it! Now is your chance to bring home a piece of modern reggae history.

PS – Vinyl is not for everyone, but if you know… you know.

#TheConfederationsCup and #WorldCup2014 Relocation →
wpDiscuz
We use cookies to ensure that we give you the best experience on our website. If you continue to use this site we will assume that you are happy with it.Ok