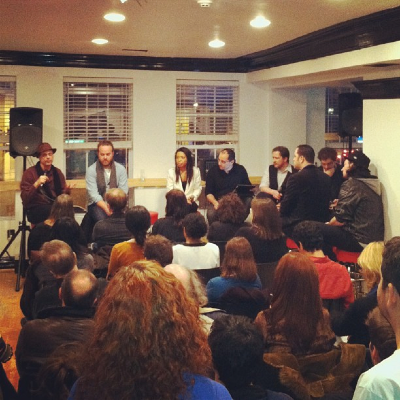 You can read the event’s description and see a list of the speakers and organizations involved HERE.

Some of the speakers offered enjoyable, engaging, valuable content, while others were average and not so inspiring. The audience consisted of artists, and people from various aspects of the music industry and media.

I found three speakers to be particularly interesting and wanted to share some of their thoughts, advice and insight.

As a publicist, I’ve been pitching Chris a few times a year for the past 5 years or so. I work year round with a few nationally/internationally touring bands and every time they have a show scheduled in the DC area, I pitch Chris via email and twitter.

What does Chris want when you pitch him by email?
– a “listen” link where he can stream music by the band at the top / in the first few lines of the email. SoundCloud link preferred. If he likes the music and needs info he will look at the bio section on the SoundCloud page.
– Chris says that CD packages received by snail mail take time to open. Sending an email with a listen link at the top will allow him the quickest, easiest way to hear the music and decide if he wants to listen / pursue further, or skip and move on to the next pitch.

– Chris is a fan of Twitter and an active user. He mentioned that venues are listening to their social media audience. If you and a few other people tweet at a venue about a problem, or requesting a particular band, the venue will notice. Maybe they will even do something about it.
– Social media allows people to express themselves with little to no risk. Unlike the old days where you’d have to send an email or use the phone (gasp), you can just fire off a tweet and the recipient will have to spend at the very least a few seconds reading it.

I had hoped to speak with Chris face to face at the end of the event, but he left in the middle of it before “networking hour.” He mentioned that he was going to 4 different shows that night!

– Bob said that he tries to listen to the beginning of 1 song from every email pitch or CD he receives. If he likes it, he will listen to more.
– He has an intern open all the CD packages.
– He throws all press releases in the trash.
– Always include a download link of your song/album when pitching Bob.

I’ve been friends with Andy for a while, he is a man of many talents. He is proficient with social media, promotion, and many other aspects of the music business.

– When asked what social media sites he actively uses, Andy replied “ALL of them.”
– You may not be an active user of a particular social media site, but your fans or future fans could be. Leave no stone unturned.
– Andy recommends that you be a fan of a band/artist and see what they do with their social media and online presence. Then take what you’ve learned / seen, and incorporate it into your own online presence and promotion.
– Engage your fans via social media, don’t ignore them.

SUMMARY
Pitching:
– The speakers agreed that they all have different specific things that they want in an email pitch. Chris Richards wants a stream link, Bob Boilen wants a download link, etc. But one thing is for certain, the larger the media outlet, the less time they will have for your pitch. Be specific, cut to the chase, include all the things they could possibly want in your email, don’t ramble on or include unnecessary info.
– Include a link to stream AND download your music right at the top of your email pitch.
– Send a short, organized, to the point pitch. No one has time to sift through your long narrative press release / bio / nonsense.
– Include all the things a press person could possibly want: music link, website link, social media links, download press photo link, short bio/description, contact info, etc.
– Start your email with a very brief, to the point explanation of what it is you want, and include the most worthwhile, newsworthy info in short form. Then you can include a longer press release, or bio at the end, if you want.

Social Media:
– Pick a band/artist in your genre that is doing well. Look at their social media sites and online presence. See what sites they are active on, what tools / apps they use, what kind of promotions they are doing, how are they engaging their fans. Then incorporate the tools and the things that seem to be working into your own social media efforts. Learn by example. Don’t get frustrated or be lazy, get active and go after it!

← This story is about Renee, a mother of five who connected nearly 1,000 fans all in support of bringing The Green to New Zealand.