Music, Art, and Paper – the day I fell in love

This is a story about the day I fell in love with a piece of paper. To be more specific, a piece of paper as imagined by Emek. It was 2008, I was 23 years old, and my band had just played Wakarusa for the first time.

The weekend felt like a validation of sorts, for a kid from a Northeast industrial city, who along with his brother, and oldest childhood friends dodged college in order to play roots reggae music. We were mid-way into our half decade of playing 100+ shows a year and by then fully adapted to life on the road.

You gotta understand that for someone who’s home has become a seat in a biodiesel van, watching sunrises over I-80, sunsets over I-90, the steering wheel in one hand, coffee in the other, and Pavement on the stereo- the very thought of holding onto a nice poster or nice anything is almost incomprehensible. Hoping to hold onto it long enough to one day hang it on your wall, to look at it and remember how it all felt, how it all was- that was a far off thought that until that day I never understood. 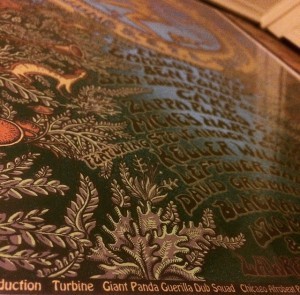 In the midst of chaos, it was a poster that opened up a new love inside me; something that has become one of my life’s passions. I first saw it as the official Wakarusa lineup poster (an identity that the festival hung on to). My eyes chased after what most musician’s would…. my own band’s name. After what felt like an hour, but was probably 20 seconds I found all 26 letters of our moniker, the words Giant Panda Guerilla Dub Squad across the bottom edge.

Then I started to notice the poster for what it really was… the intricacies of the clouds, the deep details, and the beauty of the text itself. I’d never seen anything like it; everything was perfect.

With almost no control, a habit that nearly a decade later I still can’t or don’t want to change, I emptied my pockets of all my cash, nights worth of meal buyouts and per diems, and I used it all to get the poster. And with it… began my poster obsession.

Since then I have bought, sold, traded, shipped, kraft wrapped, and obsessed over thousands of posters- but it’s this one that part of my identity hangs onto, just as it hangs on a wall in my living room.

Emek has done an unbelievable poster for just about every band you can name. It’s all incredible art and worth a look. Who knows maybe over a screen, something will click and everything will change for you too. Emek.net 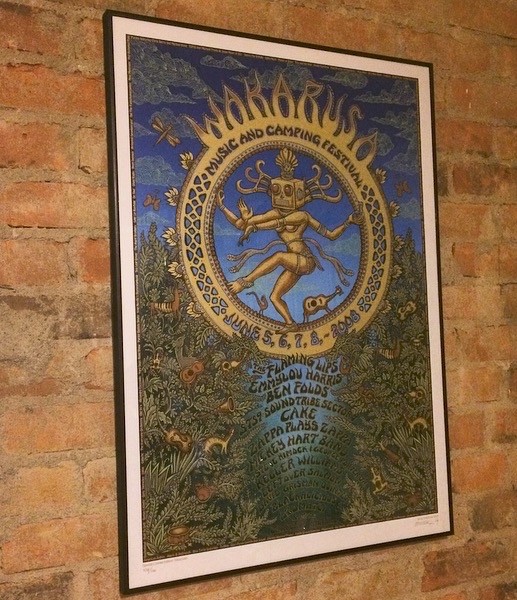