Summertime is festival season. Be it a one day street fair featuring local talent, or a behemoth like Bonnaroo, it is that time of year where music fans kick back, let loose, and allow the music to dissolve their differences and bring them together. This is community building at its finest, where the barter is king, and lifelong friendships are made. 2017 marks fifty years since the infamous Summer of Love, and the birth of the rock festivals that would grow to become the modern day music festival. 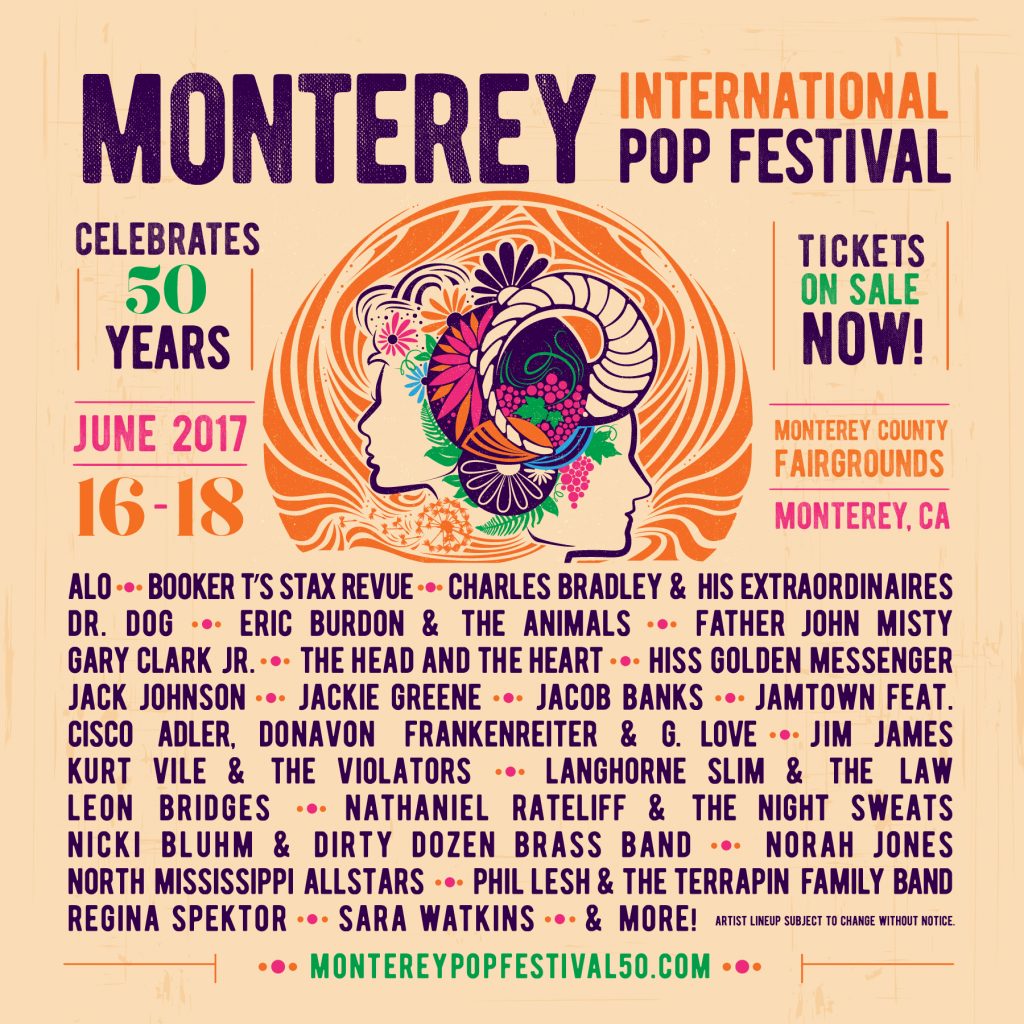 In 1967, the Bay area was the hotspot for these multi-day celebrations. Ticket prices ranged from $2-$7, and the fast growth of the California rock scene often found the venue oversold with thousands of more fans listening from the lot. One of the first of these festivals was the Monterey International Pop Festival. The bands played for free and the proceeds went to charity. The entire event was planned in seven weeks. A lot has changed in half a century, but the Monterey International Pop Festival is back for a second coming to pay tribute to its legendary first offering fifty years ago.

Jefferson Airplane. The Who. The Grateful Dead. The Jimi Hendrix Experience. Janis Joplin. Otis Redding. Ravi Shankar. The Byrds. No, this isn’t your dad’s vinyl collection, these were the bands making up the lineup of the very first Monterey International Pop Festival. Held at the same Monterey County Fairgrounds that California Roots Festival calls home every May, crowd estimates in and around the fairgrounds for that June weekend in 1967 have been projected as high as 90,000 people.

For acts like The Who and The Jimi Hendrix Experience this was their first major American show, while other acts, most notably the Rolling Stones, were unable to get visas approved due to previous drug convictions. Considered the inspiration for the Woodstock festival held two years later, Monterey Pops embodied the artistic, holistic, hippy movement that helped define the culture of the ‘60’s and ‘70’s.

Now fast forward to 2017 and get excited for a festival lineup with the likes of Norah Jones, Jack Johnson, Nathaniel Rateliff and the Night Sweats, Phil Lesh and the Terrapin Family Band, and Gary Clark Jr., not to mention two artists who performed at the original festival fifty years ago: Booker T. and The Animals. 1967 was a time of conflict in the U.S. The civil rights movement was in full force, the Vietnam War was escalating, and people across the nation were taking a stand for peace, love, and acceptance. This was the rise of the counterculture movement. Now it’s 2017, and the nation is seeing a similar division based on race and politics, wealth and prejudice. Now more than ever we need the vision of community, laid down by the original founders of the Monterey International Pop Festival and others during the ‘60’s.

When a cultural climate of fear and distrust fills every newspaper headline, it is common ground that allows people to see each other as exactly that–people. Music connects us. It allows us to lay down our defenses and open ourselves to the human experience. It is our common ground. This festival season take a chance and embody the spirit of the Summer of Love fifty years ago. Talk to someone new. Make a friend. Help build your community.

Reality Dub Squad and the Virtual Panda →
wpDiscuz
We use cookies to ensure that we give you the best experience on our website. If you continue to use this site we will assume that you are happy with it.Ok