Good Day to everyone. There has been much in the happenings of Futbol over the past week, and we should get down to business on addressing some of these occurrences. Firstly, I would like to address the Lionel Messi promotional tour. The Messi & Friends Promotional Tour of Columbia, Peru, and United States was deemed a disaster, and fault was thrown around to all sides. I believe the exhibition tour scheduled Four Games in Six or Seven Days? This is very tight itinerary. Nevertheless, the Columbia and Peru matches went off without a hitch, but there was an unknown minor altercation in Lima, that led to some discussion – and then cancellation of the Los Angeles date. It seems all the discussion around the LA Fixture is in regards to it’s poor promotion and planning, and this is why it was cancelled. The website for the fixture was reportedly ill conceived, and poorly translated. The Lima, Peru match was scheduled the day before the Los Angeles, California fixture. The planning actually called for the entire entourage to arrive in Los Angeles from Peru three hours before the match. Not Good. 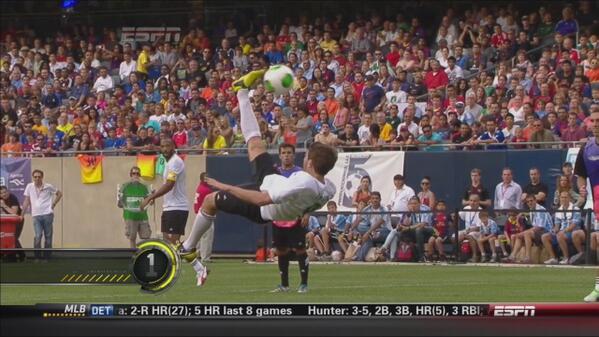 The Chicago match was played as scheduled, but the teams had to be filled with players that most people would not deem stars. I believe the “& Friends” Team started five current and graduated players from Northwestern University. I am proud to have deep connections at Northwestern University, and was even more amped to see the GOLAZO perpetrated by Northwestern University All-Time Leading Goalscorer Matt Eliason. In fact, this is one brilliant goal. Yes, it is an exhibition, and yes he is completely unmarked. This is a very skillful and technical goal, in which Matt may have struck a once in a lifetime shot – which makes it all the more brilliant. It took some huge cajones to not only attempt, but finish this brilliant goal fiercely. Unreal. I am only bummed out that more people didn’t rush over to hug him. Florent Malouda gave him big hugs and smiles, and you could tell he was stoked. Eliason received other hugs from Song (I believe), Henry, and Roth – but it wasn’t like he was mobbed. Again, this is not an easy goal under any circumstances – if it were, we would witness them more often.

Alright, I digress. The real main issues with the Chicago fixture were both “Star” players dropping out of the match, and Messi’s no-show to his own $2,500 a ticket VIP Party in which people were paying to meet Messi and other players before the match began. If you are familiar with this story, then you know the outcome : Messi did not appear, while people waited in a hot windowless room deep in the stadium for three hours. These VIP’s, I believe there were 70-80 of them, were told fifteen minutes before kickoff that the meet and greet would not happen.

There are many things to address here, but truthfully the ultimate answer in my opinion is that Lionel Messi is stretched too thin. The people around him are not considering his rest, fitness, and state-of-mind of pre-season La Liga which actually begins this weekend. Why would anyone choose that schedule directly before the Football Season? I don’t believe anyone would. I understand that this Messi & Friends Tour was for charity, but where does Messi’s Charity Money go, and what is the real deal with his Tax situation in Spain? I don’t really want to discuss this any further than asking the question : What Is Really Going On? Why can Star people get away with anything, including fulfilling contractual agreements, like meeting the people who make you who are : The Fans, The Supporters. If you throw those people away who is going to love you ?

In the end : The Messy Messi Tour, and the Spanish Tax Problem will be solved with money, and forgotten with future on-field performance – but let it be known : If Messi had scored that Bicycle Kick- his entire team would have run to him, maybe even some of the other starting eleven as well. Why do we bias our support for the same brilliant-ness? Just because you don’t expect that strike from Eliason, doesn’t mean it’s any less gracefully beautiful. I Understand Eliason is no Messi, but he is Northwestern’s All-Time Leading Goal Scorer, and conquered his place in Football. We are only able to conquer the Mountains that are in front of us. Now that I type that, I realize the entire match was strange : with the last minute drops/additions of players, the failed meet-and-greet, and the fact that it Wasn’t Messi Who Scored The Most Brilliant Goal of the Match (Month).

The actuality of Eliason’s Goal is that the audience was forced to realize that while Lionel Messi is a brilliant footballer, and his greatness should be witnessed – there is brilliant football and greatness all around us, we just have to be willing to witness it, and embrace it. Eliason’s Goal is still a beautiful picture in my mind. Just like Marcelo Balboa’s near miss in the 1994 World Cup against Columbia. The most brilliant goal that never was. http://www.youtube.com/watch?v=grEolyX9f9g

I understand one is an exhibition and the other is the World Cup Finals – but does that make Balboa’s miss better? Nope, they are equal displays of The Beautiful Game. I suppose I wouldn’t say the same thing if Balboa Scored and Eliason Missed, but that is not what happened.

Okay my bad, I am totally tangenting – my matches of the week are the final three Gold Cup Matches : The Gold Cup Final taking place on Sunday, July 28, 2013 at Soldier Field in Chicago, Illinois, and the two semi-finals taking place on Wednesday, July 24, 2013 at Cowboys Stadium in Arlington, Texas. There are four teams remaining : United States v. Honduras and Panama vs. Mexico. The universe has predicted a USA vs. Mexico Final. Yet, don’t count Honduras or Panama out yet, both of these teams are capable of advancing, and I look forward to witnessing the results.

The USMNT (United States Men’s National Team) have played exceptional football as of late, and are operating on all engines. Jürgen Klinsmann looks especially astute with his Eddie Johnson Substitution against El Salvador. Johnson scored just fifteen seconds after entering the pitch, and scored with his head off his first touch from a corner kick. It was an act of sheer power and authority. Incredible Finish. I sat here stunned – still questioning the actual substitution itself, and Eddie Johnson’s choice of hairstyle. Brilliant Goal and Incredible Substitution. USA is operating as a unit, and it is lovely to see. 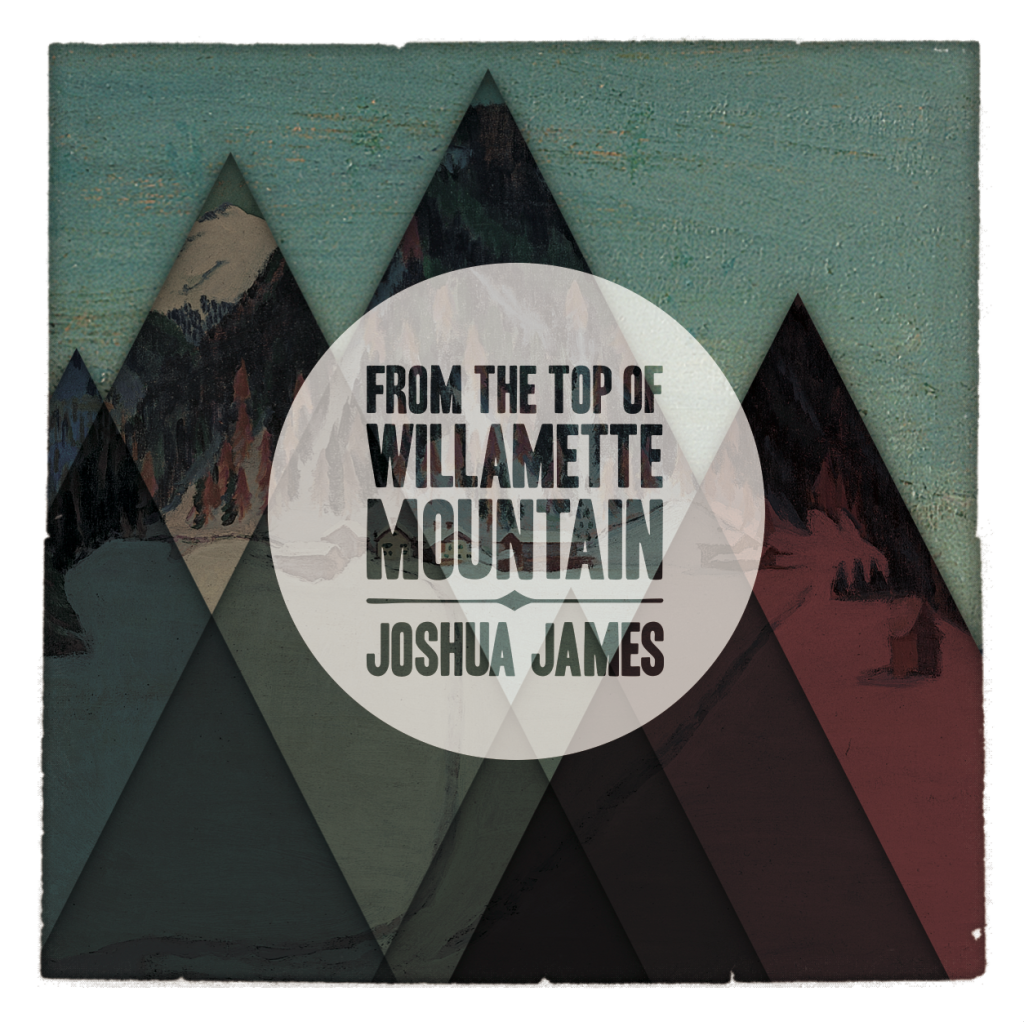 THE BEAUTIFUL MUSIC
For this week’s beautiful music I am going to direct people to Joshua James, and his outstanding record album : From The Top Of Willamette Mountain. I believe this album to be a hidden classic amongst our current generation of artists. Every song on the album is heartfelt and true, with patience and begging. James’ voice like no other – It will capture and intoxicate you, make you believe and celebrate life with all its wonders and desires. Joshua James in May 2013 has recently released an EP titled : Beware, and with that I said, I don’t want From The Top Of Willamette Mountain to be forgotten.

Joshua James is one of the most radiant men I have ever met, and I am honored to call him a friend. The first time I met him, I had the pleasure of interviewing him here :

The English Premier League begins in less than a month. We will have even more madness to talk about very shortly.

Bright Days to everyone –