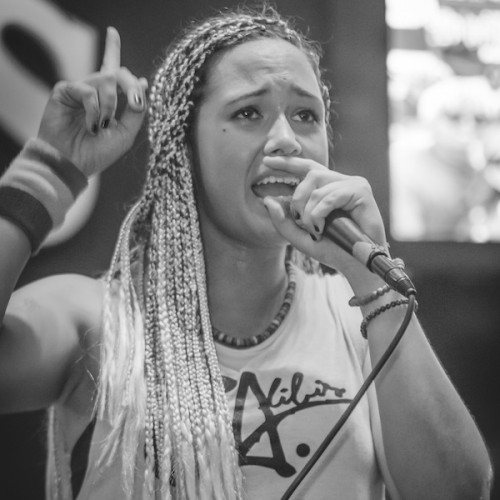 Coming to you from San Diego, California, born and raised in the city of Escondido, we bring to you Roots Musician, Janelle Phillips. She is a blend of culture, a Cali Lady bringing forth conscious music. She began writing lyrics and poetry as a freshman in high school and passed them around to her peers for feedback. In 2011, at age 19, she learned to play guitar on her own and started writing music for her songs. She didn’t wait too long to start doing open mics. Three months later, after learning three chords, she initiated small performances and would continue to do so for the next few years while in community college. She would jam in the courtyard finding talent amongst people passing by and started arranging shows in her area, where she began promotion and graphic design. To her, the best part of those days was giving so many people the courage and strength to perform on stage for the first time.

In 2013, she became friends with an all around musician and producer through college friends, and her 1st professionally recorded EP, “To Be Heard” by Ryan J. Parker was released. One of her strongest songs, “Sensational Feeling,” was used to network with people from the reggae family. She linked up with brother Gary Dread, drummer of The Movement. He had her featured on one of his tracks from his solo career, and as time passed he mentioned E.N Young’s name as one of the new talented producers. She began to research the artists coming in and out of Imperial Sound, and it became her dream studio. As the road was paved she recorded 4 tracks with E.N in December and January, 2014/2015, including her powerful song, and reason for the album title LIONESS.

All her lyrics are self-empowering, healing, and profound. Her goal is to uplift the souls that are enlightened by such beautiful music. The music of love, strength, and truth: Reggae Music. Her original inspirations began with The Fray and One Republic, and when she discovered reggae music in 2009 on her own, the biggest influences that molded her as a female reggae artist became Trevor Hall, Matisyahu, and Bob Marley. She was also moved and influenced by The Dirty Heads, Sublime, Slightly Stoopid, SOJA, and The Movement. She says reggae changed her life in the most powerful way, as she found herself embarking on a spiritual evolution and feels she has yet to blossom. Her experience and time spent working on this Debut Album with E.N Young has filled her with knowledge of so many new things with regards to music and a conscious way of living. She says E.N’s way of expressing love and passion towards her work strengthened her. She is so excited and blessed to start taking the stage to compel the crowd to move to the highest state of mind, so they may influence their friends and family with positivity. Her belief helps to move the people’s faith to The Almighty, and to bring them courage so they can enjoy the life He gives them each day.