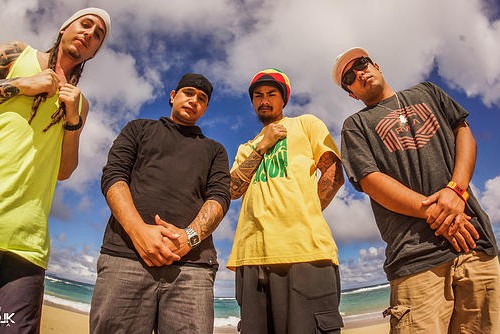 Their recent project “Live at Imperial Sound” released on Nov. 5, 2013 under VP Records debuted #4 on iTunes charts. The six song EP gathered nation wide attention with “in the making” youtube video that showcased four piece Inna Vision recording live in one take. This was the first in a series of recordings produced by E.N Young that will be released by Roots Musician Records. Inna Vision albums have debuted top ten on iTunes, are available world wide, and are some of the most played island reggae songs on Pandora.

Inna Vision has toured consistently since 2008 performing in over 60 cities and 23 states across the U.S. They’ve held direct support for Tribal Seeds, Bambu Station, Fortunate Youth, Kymani Marley, Mishka, Rootz Underground, Damian Marley and more. Inna Vision performed at Las Vegas’s annual Pure Aloha Festival along side Don Carlos, the 2013 California Roots Festival in front a sold out attendance of 10K fans, and in the same year performed on Reggae in the Hills with headliners Capleton and Steel Pulse.

Inna Vision has been considered one of Hawaii’s foundation roots reggae bands with the overall message promoting love from Hawaii to the world. The music is grass rooted, organic, original and always evolving. The goal is to inspire lives world-wide with self motivation, understanding and acceptance. Keep your ears out for Inna Vision’s fourth full length album set to drop summer 2014.