Getting Down to Basics with Soccer Garden Party Founder Julien Melendez 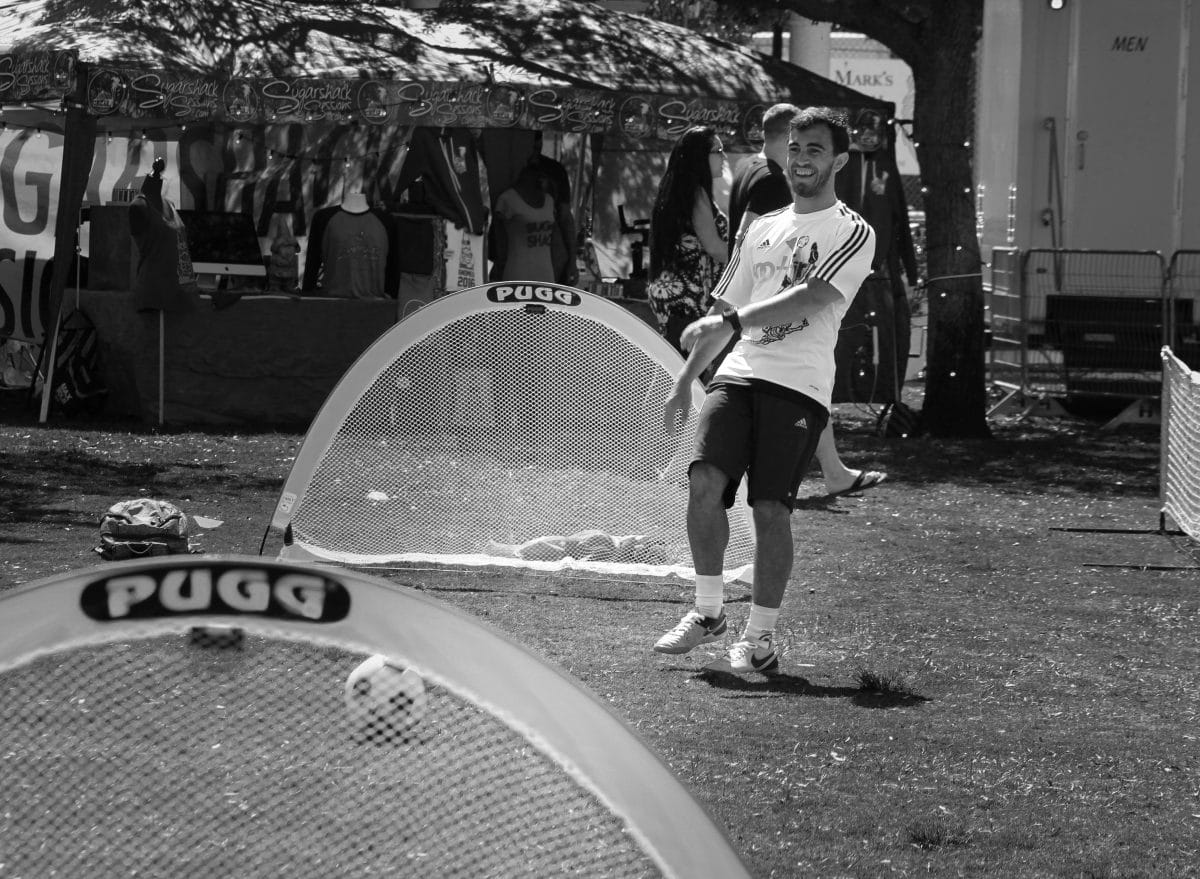 Soccer Garden Party has become a real, raw soccer experience. A soccer experience that unites all walks of life – sharing, connecting, socializing, engaging, and generating a community feel.  Founder Julien Melendez had all the aspirations and drive to go pro, touring through Europe chasing his dream. After numerous stints across Spain, Italy, and Austria, Melendez headed back to the states to attend College of Marin, where he was named Athlete of the Year in 2016. Wanting to continue to keep soccer close, he reinvigorated his love for the game coaching for Mill Valley Soccer Club in California.

Coaching has not only deepened Julien’s passion for soccer, it has allowed him to mentor youths, paving the way for a positive outlet. Experiencing soccer’s capacity for community building eventually lead Melendez to develop Soccer Garden Party, an avenue for people of all skill sets to bond through the shared love of the sport. SGP raises the bar even further through their partnership with national nonprofit America SCORES, an organization aimed at assisting at-risk youth. Rootfire caught up with Julien earlier this fall and asked him to paint us a picture of Soccer Garden Party and what it’s all about.

Rootfire: For those now just hearing about Soccer Garden Party, can you give us a quick background, fill us in on what inspired you, and how the idea was brought to life?

Julien Melendez: Back in 2015, I attended Rootfire at the Beach in Avila Beach, California. It was the first time I went to a live music festival and although I always enjoyed the reggae and roots, I found a deeper connection to the culture behind it. After the festival, I reached out to Rootfire to tell them how special the experience was for me, and Seth Herman emailed me back, unexpectedly asking about my passion for soccer. From that moment on, he and I were driven to find a way to infuse soccer into the music scene as a way for people to actively participate with those around them.

We tested out the concept of Soccer Garden Party at Rootfire at the Park in 2016, and it was an incredible success. People of all ages and backgrounds came together to play small-sided pickup games and soccer tennis. A police officer couldn’t hold back his urge to join in, and young kids wearing English Premier League jerseys played with us throughout the day. We were supposed to shut down all the soccer activities by 4:00, but people continued to start games and juggle circles which lasted until dark. From that moment on, I was inspired to bring people together through my lifelong passion for soccer.

RF: Rootfire At The Park, as a festival, has an emphasis on music and lifestyle.  Soccer Garden Party has become a key piece of this puzzle providing a way to socialize, let loose, and form new relationships through soccer.  What has Rootfire meant to you personally since combining efforts with them?

JM: Rootfire is more than just a record label and festival. Since my very first experience at Rootfire at the Beach, I felt that I was a part of bringing the festival to life rather than just someone who is attending. It is a lifestyle that is rooted and grows from community, family and culture. I believe that Soccer Garden Party is built on the same foundations, which is why it has so fluidly become a part of the Rootfire mission. This journey has brought me closer to so many unique individuals including various artists, event staff, travelers and locals. Rootfire connects me to a greater whole and encourages me to share my passions with those around me. It has also given me the opportunity to create something from my love of soccer while also exploring the art, music and people that contribute to the progressive roots movement.

RF: For those attending the festival who are excited about participating, what can they expect?  Is there something for everyone?

JM: The mission for Soccer Garden Party is to create a comfortable environment that people of all ages, backgrounds and skill levels can enjoy. Anyone can participate in our soccer challenges, small-sided games, soccer tennis and the fun juggle circles. We even organize a short kid’s skill session with games while the parents enjoy the morning yoga. At previous Rootfire events, we have also seen people grab a ball and create a game of their own on the side. The only rules we have are: bring good vibes, be safe and have fun with the people around you. You may also join in at any time and leave whenever you like, so don’t feel that you have to commit all your time to soccer. Our hope is that our activities and games connect you with other music fans who can make your overall festival experience a better one! 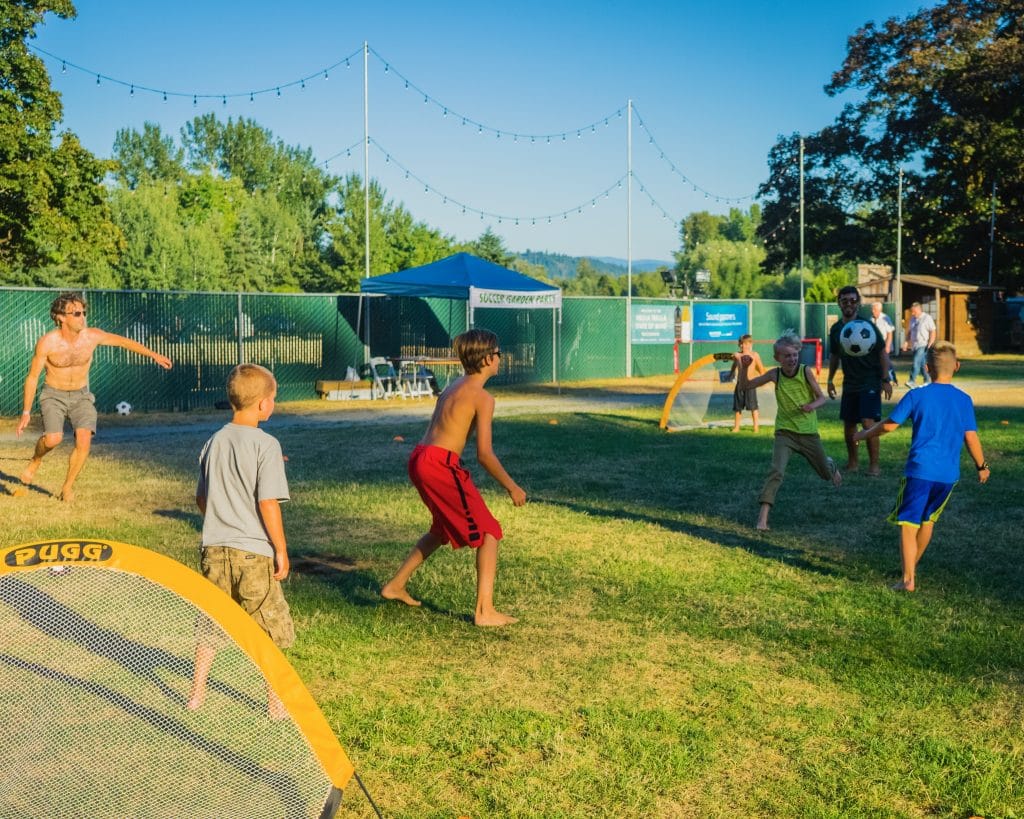 RF: Soccer has been embedded in reggae music culture for some time now. I smile picturing Bob Marley in my head bouncing a ball off his knee. I know several of the musical acts/performers have been eager to have fun and engage with their fans through SGP. Can you share a story from a past festival of artist interaction that has stood out?

JM: I have spoken to many of the artists that have performed at Rootfire events, and even had the pleasure of kicking a ball around with Giant Panda Guerilla Dub Squad bass player and vocalist James Searl at Rootfire at the Park in 2016. The reason I discovered Rootfire was Giant Panda’s song “Steady,” which I came across on Youtube before Rootfire at the Beach a year earlier. It felt as if everything came full circle in Cocoa when James and I shared a drink and passed casually before Giant Panda’s set. While we were playing, James had talked about his memories playing soccer in the backyard, and even though he doesn’t consider himself the most skilled player, he believes there is a pure joy that comes from playing the game with family and friends.

RF: With multiple festivals under your belt, where do you see the future of SGP heading?  With Florida right around the corner, will there be anything new that will be incorporated?

JM: I am trying to build the concept slowly, but I do have a lot of visions for where I want to take it. Currently, I am looking to bring Soccer Garden Party to all sorts of music festivals and social gatherings such as California-based events like Outside Lands and the Marin County Fair. I think that SGP can truly enhance the festival experience by connecting us to a greater whole and giving us something interactive to do. The main objective (down the road) is to have our own soccer events that would combine music and soccer into a full day – to start, I am looking to have small events like barbeques and fundraisers which would benefit our charity partner America SCORES. In collaboration with Rootfire, we are also looking to host small pickup soccer parties before performances at various theaters in California including The Catalyst and The Mystic Petaluma. Stay tuned…

RF: Last of all, I would love to hear what soccer has meant in your life, and how you’ve used it to help others while motivating so many young athletes that cross your path.

JM: I have played soccer since I was five years old and have built my career around it. I traveled to Europe on numerous occasions to play with professional teams in Italy, Spain and Austria, but never seemed to make the break. During my time as a player, I picked up coaching at Mill Valley Soccer Club in California and discovered a true passion for working with kids. Now that I have been coaching for some time, I have realized how important soccer has been and is for me. It has taught me so much about life, it has helped me build my character and has blessed me with the best of friendships.

Soccer is more than just a game. It is a lifestyle built on the foundations of community, family and culture. Through coaching and Soccer Garden Party, I hope to not only bring people together to enjoy the game, but to give people an experience that has a positive impact on their lives. We are all looking to feel more complete and whole; I know that I would not be the person I am today without soccer, and it continues to direct me toward new interests. My best memories have been related to soccer, whether it was winning championships with my teammates or watching games live at European bars with fans. I must say that my most fond soccer memory was when we hosted the first unofficial Soccer Garden Party at Rootfire at the Park 2016. Seeing people of all interests and ages come together to kick the ball around was a truly special moment. I always believed that soccer wasn’t about how well it is played, but about how connected we feel playing it. My coaching philosophy and reason for building SGP are both rooted in that belief.

Julien Melendez will be hosting the next Soccer Garden Party throughout the weekend of November 10-12 at the second annual Rootfire At The Park in Cocoa, FL. VIP passes and single day tickets are available here. 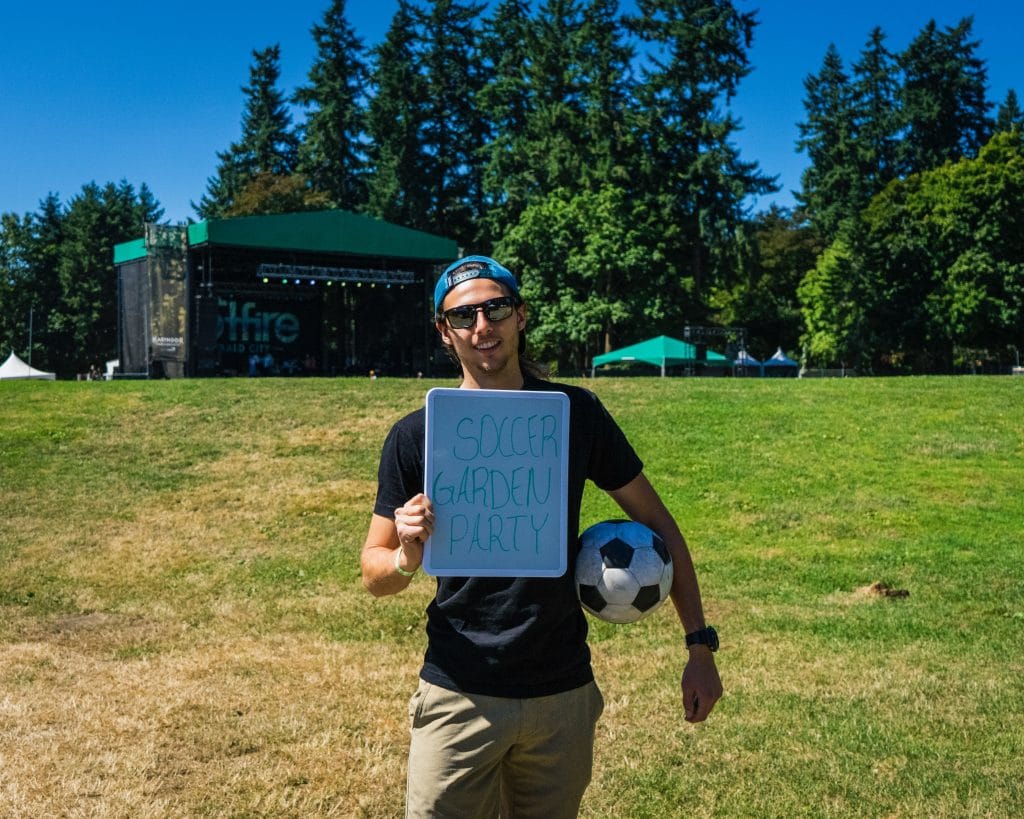 First Watch: The Ries Brothers – No Place I’d Rather Be →
wpDiscuz
We use cookies to ensure that we give you the best experience on our website. If you continue to use this site we will assume that you are happy with it.Ok