The wait was over. Phish’s 2010/11 three-night run at Madison Square Garden. The anticipation of NYE is built into our DNA. Magnify that by the feeling of being surrounded by thousands of fans, inside one of the world’s most iconic indoor arenas, and the experience is surreal. That night it was as if the atmosphere had been full of fun gas, pure jubilation.

For a few hundred fans the anticipation started at 11 am that day. They had waited in line for a wristband that would allow them to purchase a limited edition Phish poster later that evening. The wristband was like a golden ticket, and unknowingly I had missed the boat. Later that evening I entered MSG, anxiously looking for the merchandise table. I was clueless to the fact that without a wristband my effort was futile.

Behind the 6 foot merchandise tables, I saw it. That night’s poster was an exotic bird perched on a rainforest-esque twisting and curling limb. A small window in the image reveals a psychedelic sun peaking over a mountain range. I have seen thousands of Phish posters, and still five years later, this one touches me the deepest.

Pushing my way through the crowd I walked up to the table, it’s my turn… “I’ll take one of the red posters please” I blurt over everyone else who is obviously saying the same thing.

“Guys, no wristband, NO POSTER. That’s the deal,” says a large union foreman, who is commanding the merch. NYC has unions for everything surrounding concerts from loaders to security- their rules are unwavering, and this was no exception.

Although denied, I do not move and I join the growing poster mob. It’s a standstill. The wristband rations ran out long ago, and the mob was only getting bigger- waving $20s and $50s in the air, their voices getting angry as they shouted for a poster. These were my kind of people, I shared their obsession. For some it was capitalistic, Ebay would command a premium. For others it was to hold a piece of history. As for myself, I had a laser focus on that bird. It blinded me from any deeper awareness of my intention, other than to have that poster, immediately. 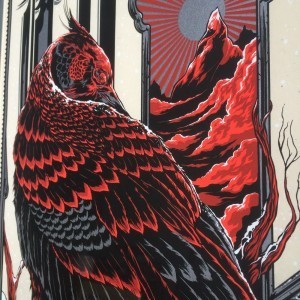 Out of the corner of my eye I noticed a coffee can behind the man. It was filled with discarded wristbands, one for every poster sold. Bingo, there was my answer, I just needed one wristband.

The curiosities of the pre-show scene happening in the lobby drew a fan over who wondered what was going on. Like all of us, he was beaming with excitement for the night. Without making eye contact, he asked me what we were all doing standing around the table when the show was about to start. “Well, we’re all here trying to get this poster, but this dude won’t sell them to us unless you have a wristband that were handed out earlier this afternoon. Nobody has one, seems like a bunch have already been handed in, but there’s a huge stack of posters still here.”
“What do we do?” he said, quickly taking allegiance to our side.
“Well…” I said, looking up at the coffee can, a thin rope the only thing between us. “That can right there has all the wristbands that have been collec-”
Before I finished my sentence, the kid was past the rope, grabbing the coffee can and throwing it high in the air. The stew of desire and anxiety that had been building up in the mob exploded. This kid MADE IT RAIN and like the Keyser Söze he was gone, slipping back into the crowd, leaving a trail of insanity in his wake.

The big guy running the merch lost it. “GET THAT KID” he screamed, but it was useless, he couldn’t leave the table, and he knew it.

“THAT’S IT, we’re CLOSED!” he yelled, folding his arms across his chest.

We stayed put, calling his bluff. There was no way this man was going to tell his supervisor that he refused to sell the thousands of dollars worth of posters because some tripping kid totally just schooled him.

By now I had a handful of bracelets, but having stood at the table for the last hour and raising hell, there was no way they were going to sell me one, at least right now.

I walked around the venue for a few minutes trying to think what to do. I saw a few kids who had been denied posters earlier in the night and discreetly handed them wristbands.

I circled back to the merch table where hundreds of people were still surrounding it. Just as I slipped near the front, the big man finally wavered and I heard his nervous voice say, “Alright let’s go. Wristbands!”

Mine was the second one he took. The poster was in my hand, 12×36 inches rolled up, its corners unaffected by the shoulders I bumped as I tried to get out of the lobby, searching for space.

I’ve loved this poster from that moment until this moment, and will continue to for years to come. It currently hangs in Fiorella, my best friends’ restaurant, in the Rochester Public Market in Rochester, NY.
—
Poster by: Kentaylorart.com.au 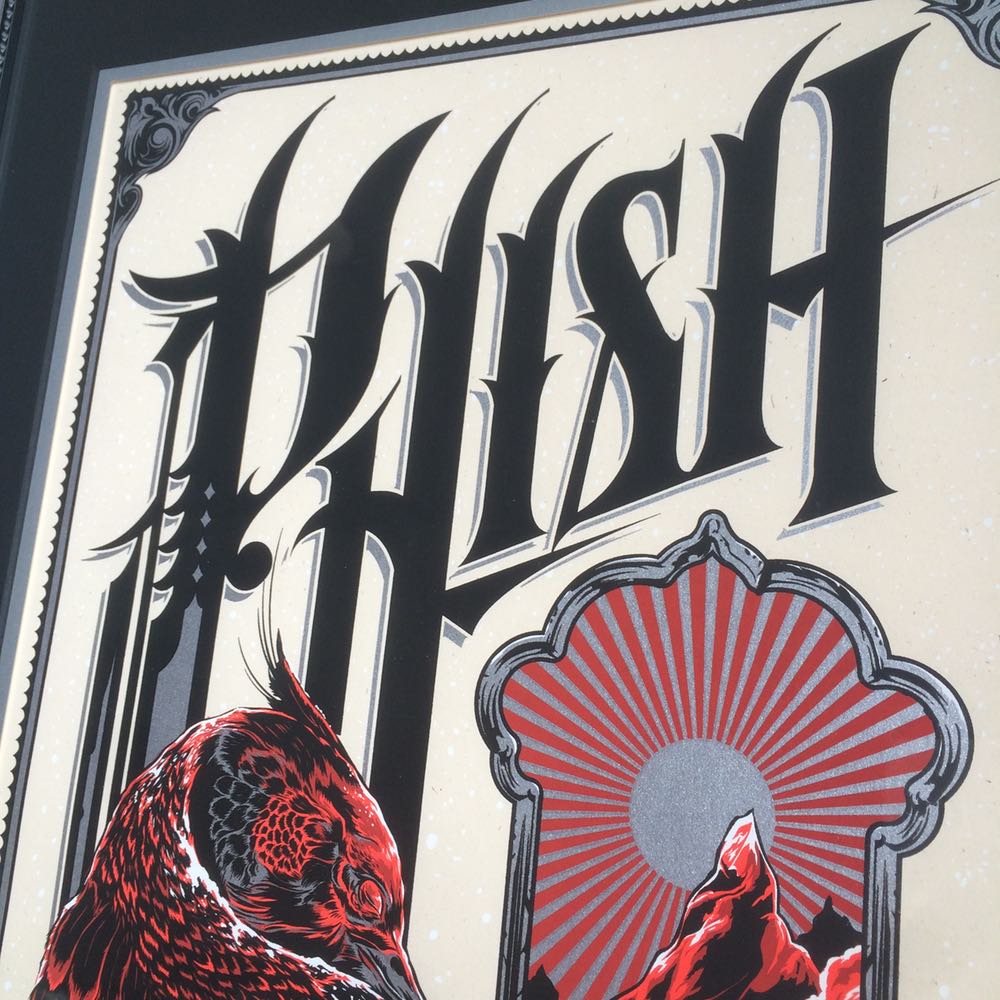 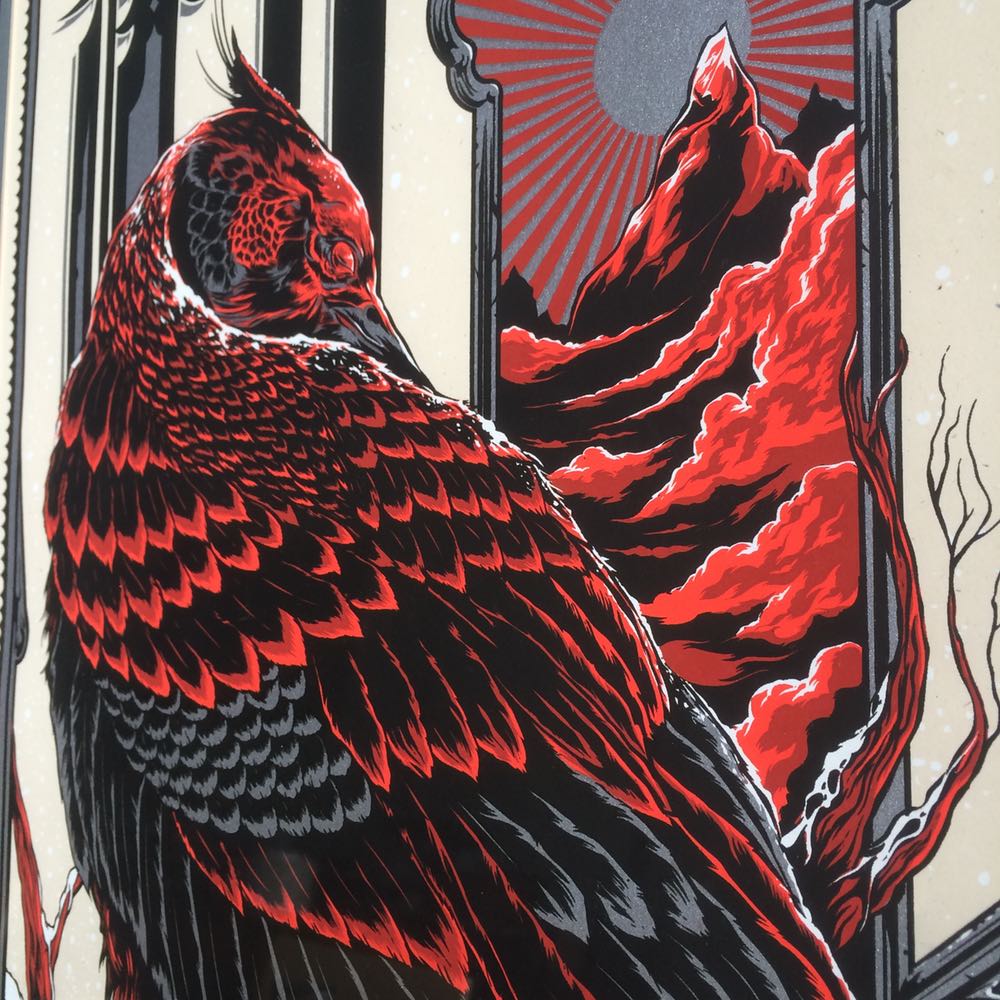 ← Golden and the Story of the Cooperative