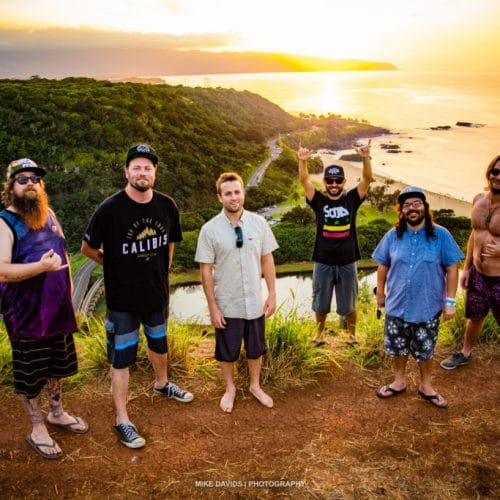 Fortunate Youth is a collaboration of South Bay reggae stand-outs. Rising from various bands, they’ve created a phenomenal 6-piece masterpiece bringing more fire to the stage than ever before. Combining rootsy vibes and unique bass lines united with multiple harmonies, boisterous guitar solos, and heavy keys separates Fortunate Youth from every other mainstream reggae band. With their high energy approach and positive stage presence they provide an unforgettable show to every music fan. Fortunate Youth’s objective is to ensure a performance that leaves you feeling euphoric and curious of what might happen at the next show.
In 2011 they supported Tribal Seeds on their nationwide Tribal Youth Tour to spread their conscious music to the nation. F.Y. linked up The Green, from Hawaii, for a Midwest/Westcoast run before jumping back in the studio to record. They have hit the masses promoting only their 6-song EP titled “Up-Lifted EP” and just released their full-length album, “IRIE STATE OF MIND” on July 1, 2011. Fortunate Youth will also be touring very heavily through 2011 including a Naitonwide CD Release Summer Tour.Upon Releasing their full-length album they quickly rose to #2 on the iTunes Reggae Charts and also locked in a #13 position on Billboard Top 100 Reggae Albums. Receiving great praise for early success Fortunate Youth strives to spread their interpretation of Reggae music to Music Lovers worldwide.Fortunate Youth toured very heavily in 2012 supporting Headliners such as The Expendables and Tribal Seeds. FY also headlined their own Nationwide Summer of Sweet Love Tour proving they can pull their own weight. Making their first international departure, Fortunate Youth played 4 shows in Costa Rica spreading the love of reggae music internationally.2013 release, “It’s All A Jam”, hit numerous charts including #1 on Billboard Reggae Charts, #10 Billboard Pacific Heatseekers Chart, #23 Billboard National Heatseeker Chart along with #1 on iTunes Reggae Charts and #46 iTunes Overall Charts. FY followed the album release with a 55-Show nationwide Spring Headline Tour seeing great response from the album’s successful release.

Fortunate Youth just finished a Spring 2014 Headline Tour and are gearing up for their Fall with Friends Tour which boasts a solid lineup of support bands including: New Kingston, The Expanders, The Steppas, Ease Up, Thrive, Ashes of Babylon, and more.

Fortunate Youth released ‘Dont Think Twice’ in 2015 and followed it their “Dont Think Twice Spring Tour” with Hirie and Sensamotion Band. In 2016, they released their “Love is the Most High” compilation of Love Songs near Valentine’s Day and then quickly released ‘Cub Collections, Vol. 1″

Fortunate Youth supported Stick Figure on their ‘Set in Stone’ Album Release Tour which over 80% of the shows Sold Out! They followed up with another Summer Support Tour with Slighty Stoopid, SOJA and Grouch & Eligh and went directly into Fall with Slightly Stoopid heading back down the West Coast.