Forever Party: Ringing in NYE with Dub Side Of The Moon

Lem Oppenheimer, COO and co-founder of Easy Star Records tells me on the phone last week. And he’s right. Dub Side Of The Moon has remained on the Billboard Reggae Charts since its release in 2003, consistently reaching new listeners. 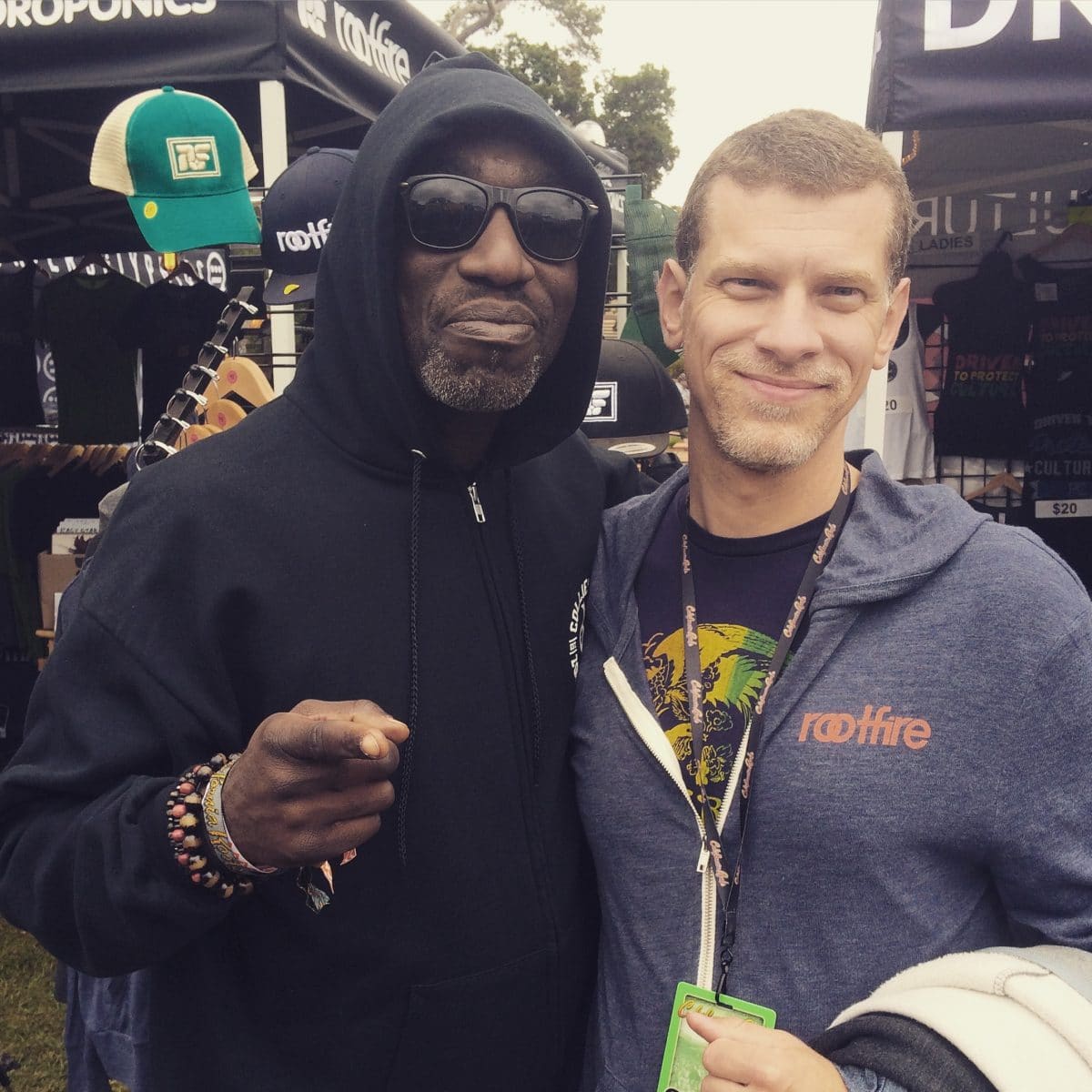 Lem Oppenheimer (right) with John Asher of The Expanderss across the globe. This pioneering album would give legs to what is now one of the most active independent reggae labels in the world, not to mention one of the most reliable sources for good new music. The now familiar red, gold and green stamp of Easy Star Records serves as a beacon of trust, letting the listener know that whatever is on the inside is of the highest quality.

Success defining records aside, the obvious next step for any fan is to partake in the live experience. This New Year’s the Easy Star All-Stars will be joining Giant Panda Guerilla Dub Squad and John Brown’s Body at the 2-night Forever Party in Rochester, NY to play Dub Side Of The Moon in its entirety.

Get your tickets to the Forever Party

But the question still remains: how did Easy Star Records, the label that has delivered such tastemaker albums as JBB’s Kings and Queens, The Black Seeds’ Dust and Dirt, Jesse Royal’s Lily Of Da Valley, and Rebelutions’ Count Me In come to be the dominating force of the international reggae scene that it is today? Rootfire hopped on the phone with Lem to get to the bottom of exactly that. Give a read below, but for the full story take a listen to the unabridged interview on the Rootfire Soundcloud page.

Rootfire: I want to take a step back and talk about the origins of Easy Star as a record label, as well as putting together the All-Stars. You guys formed in ‘96, is that correct?

Lem Oppenheimer: Yea, it begin in December/November of ‘95. There was a show that Heartbeat Records had put together with Sugar Minot, Freddie McGregor, Sister Carol and The Meditations, and Michael Goldwasser and I were at the show and during that show I got inspired and I leaned over to him and said that we should start a reggae label. And we told our friends Eric [Smith] and Remy [Gerstein] and they hopped on board. We basically spent much of ‘96 figuring out what it meant to be a record label, putting together the incorporation, coming up with the name and moving toward doing things. We put out our first 7” in ‘97 and our first full length in ‘98.

RF: A lot of the artists on that first Easy Star compilation are pretty renowned Jamaican artists. Were they anxious to work with you guys? What was the courting process of getting them to come out?

LO: It came together pretty quickly because when we started we had a very stated goal of doing things correctly. We knew how poorly Jamaican artists had been treated, the lack of royalties, the lack of payment, so we wanted to do things right. We sorta knew people through the scene, but it was through our contacts withVictor Axelrod a.k.a. Ticklah that we were introduced to The Meditations. The Meditations came to meet us in our apartment and very quickly wrote a song with Michael, the song “Jah Music,” and the experience was so good with them that they were like “we’re gonna tell people about you” and very quickly we met Sister Carol and she introduced us to Sugar Minot. People just had such a good experience working with us that we were very quickly led down the path.

RF: Pushing forward from there, where did the idea for Dub Side Of The Moon come from?

LO: At the time we usually had to sell record store to record store, usually on consignment, and go drop a box of CDs or singles off and try to collect from the last sales that we had. I was listening on a walkman to Dark Side Of The Moon as I did it, you know, just growing up as a classic rock kid, among many other musical tastes, that’s been a long time favorite record of mine. As I was walking around, it suddenly started occurring to me that we could cover this record in full and make it work, and by the time I got back that afternoon and talked to Eric and Michael about it, within a half hour we had the concept and name of Dub Side Of The Moon and were discussing various things we could do with it.

The goal was definitely for this to be something that a lot of people will know, and that it will serve as a chance to introduce people to reggae. But at the same time we were very cognitive of…you know if you go back to records like Fire On The Mountain, the Grateful Dead reggae tribute that came out in the late 80’s early 90’s, I just didn’t love the production on that. I felt like there was really the opportunity to come just heavy roots on Dub Side. We talked about it and Michael and Victor kind of took the philosophy of that we wanted it to sound like Pink Floyd could have recorded it in Jamaica in 1972-73. And that’s really what we aimed for with the overall production style.

RF: Was it just a coincidence that Dub Side came out in 2003, almost exactly 30 years after the original?

RF: When did you get turned on to reggae?

LO: Well my older brother very much had me into it when I was younger. We listened to a lot of Marley growing up, I remember listening to a lot of Steel Pulse when I was probably nine or ten. So I was always aware of it, and I was always drawn to bands like The Clash or Elvis Costello doing “Watching the Detectives.” I would just always be aware and be like oh, I like that tune, and wouldn’t even be able to say because it’s reggae or because of a certain rhythm, I was just always drawn to it. 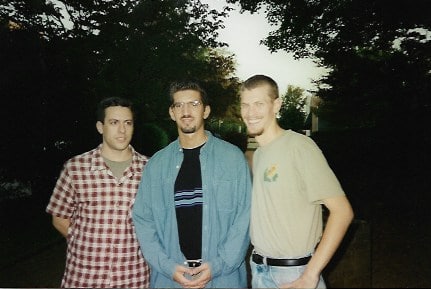 But it was really most heavily when I moved back to NYC after college and me and Michael were roommates. You know,  he is a reggae encyclopedia, and he had a great collection of cassettes and vinyl and we just really dug in. Over those couple of years I became much more fixated.

And you know it’s funny because I have much broader musical tastes, and oftentimes don’t necessarily sit and listen to reggae all the time now. When you run a business and are listening to so many demos and so many works in progress and going to so many shows, that often times when I go to like walk the dog I plug in and I’ll listen to something totally random and different.

RF: And even from the early days, walking around with Dark Side Of The Moon playing as you’re delivering records.

LO: Exactly. But at that time I could have been easily putting on a Best Of Studio One tape or something along those lines. That’s just what I happened to be listening to that day.

RF: Yea, who knows what would have come out first if it hadn’t been Dark Side Of The Moon on that day…

Lem and I talked about much, much more: make sure to give the full interview a listen below. In the meantime, come catch the Easy Star All-Stars’ Dub Side Of The Moon experience this New Year’s at the Forever Party in Rochester, NY. The two day event features Giant Panda Guerilla Dub Squad, John Brown’s Body, Thunder Body, Easy Star All-Stars and The Saplings. Pick up your tickets today.

Tagged as: Dub Side Of The MoonNYErootfire

← The Spirit of Bob Marley: Al Anderson of The Original Wailers